See the gallery of the Orchestra's tour experience

“I am absolutely thrilled to be with you tonight to experience the musical creation of people of color, whose works at another time and place would not have been so celebrated,” Carmen Twillie Ambar, President of Oberlin College and Conservatory, said in welcoming a Carnegie Hall audience of 1,950 for a January performance that included the 1932 oratorio The Ordering of Moses by R. Nathaniel Dett, a Canadian-American composer of African descent and a 1908 graduate of Oberlin Conservatory.

Ambar emphasized the importance of pausing to consider the struggles of the past that have given way to this moment, as well as the ongoing challenges that remain.

“At a time when people openly question the value of diversity, the compositions you’re about to hear remind us all of our own humanity and that we can find joy in the wonderful complexity of difference.”

The program’s first half was highlighted by A Metaphor for Power by ASCAP Award-winning composer Iván Enrique Rodríguez, a deeply moving “musical essay”—in the words of its creator—that calls into question the ubiquitously trumpeted assertion that all men are created equal. At the conclusion of the piece and at the beckoning of conductor Raphael Jiménez, the composer sprang from his seat on the left side of the house and dashed to the stage, where he crossed his arms over his heart in humble appreciation as waves of adoration washed over him from audience and performers alike.

The evening’s second half consisted of Dett’s master work, a musical retelling of the Exodus story that summons the composer’s firm grasp of classical composition and his trademark incorporating of influences from folk songs and spirituals—an approach he first developed as a student at Oberlin and that he employed throughout his career. Though many among the orchestra and choir of some 150 voices had enjoyed the honor of making their Carnegie Hall debuts two months earlier, the moment marked a coming-out party of sorts for accomplished soprano soloist Chabrelle Williams ’11 and tenor soloist Limmie Pulliam ’98, whose rich and varied careers had until that moment not included engagements at the famed venue. They were joined by mezzo-soprano soloist Ronnita Miller and baritone Eric Greene.

The choral ensemble, made up of the Oberlin College Choir, the Oberlin Gospel Choir, and the campus-community ensemble Oberlin Musical Union, was prepared by conservatory faculty Ben Johns and Gregory Ristow. The performance opened with Johannes Brahms’ Tragic Overture.

This concert was generously supported by Jolyon F. Stern ’61 and Nelle Nugent Stern. 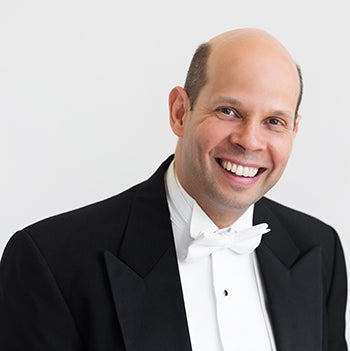 Praised for his “tightly wrought” and “stirring, vividly shaped” renditions (The New York Times), Raphael Jiménez is celebrated for his work with orchestras around the world. His recent engagements include performances in China with the symphony orchestras of Zhejiang and Guanxi and in Latin America with the symphony orchestras of Venezuela, Colombia, Peru, and Puerto Rico. Jiménez has also led the opera orchestras of Lübeck, Germany, and Palm Beach, Florida, and he has collaborated with several ballet companies including performances with the New York City Ballet at Lincoln Center.

Jiménez currently serves as director of orchestras and professor of conducting at Oberlin Conservatory of Music. He has frequently been acknowledged for his remarkable ability to lead, masterfully train, and inspire young players to perform at the highest level. The South Florida Sun-Sentinel reported, “The orchestra, conducted by Raphael Jiménez, played with a professional sheen rarely heard from student ensembles.” His performances with the Oberlin Orchestra at New York City’s Carnegie Hall and at Symphony Center in Chicago have also been well received: “To say that this concert was impressive for an ensemble of young players would be an understatement: this is an orchestra that any city would be happy to have as its resident professional ensemble.” (ClevelandClassical) 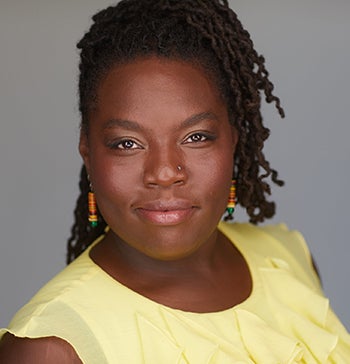 Three-time district winner of the New York Metropolitan Opera National Council Auditions, soprano Chabrelle Williams is a dynamic presence on the stage with a range that includes opera, gospel, and musical theater. This season, the Oberlin 2011 alumna will made her debut with the Charleston Symphony and at Carnegie Hall in a performance of Nathaniel Dett’s The Ordering of Moses with the Oberlin Orchestra.

Williams’ recent operatic work includes debuts with the Boston Lyric Opera as Milica in the film Svadba by Ana Sokolovic, with Houston’s Opera in the Heights as Leonora in Verdi’s Il Trovatore, and with Lincoln Center Theater where she co-created the leading role of Esther for the world premiere of Intimate Apparel by Ricky Ian Gordon and Lynn Nottage, directed by Bartlett Sher.

Williams made her debut at the Opera Theatre of Saint Louis, creating the roles of Cousin Blanche and Sadie Griffith in the world premiere of Terence Blanchard’s Champion. She reprised the role of Sadie Griffith with San Francisco’s Opera Parallèlle. She has also appeared as Annie in Porgy and Bess with the Cincinnati Opera, in Le Nozze di Figaro with Opera In The Heights, and in Ariodante with Opera Omaha. Her work in art song  and oratorio includes recent premieres of two new works commissioned by CityMusic Cleveland, where she was also featured as the soprano soloist in Verdi's Requiem. 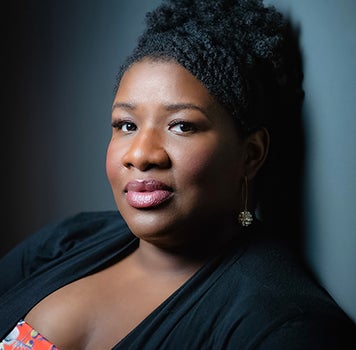 American mezzo-soprano Ronnita Miller has a richly varied 2022-2023 season. She joined the Los Angeles Philharmonic as Schwertleite in Die Walküre at the Hollywood Bowl in the summer of 2022. She returns to San Francisco Opera as Filippyevna in Eugene Onegin and reprises the role of Ella in X: The Life and Times of Malcolm X with Opera Omaha, and she also appears with the Atlanta Opera as Erda in Das Rheingold. In concert, she performed with the Indianapolis Symphony in Handel’s Messiah and joined Oberlin Conservatory at Carnegie Hall as the mezzo-soprano soloist for Nathaniel Dett’s The Ordering of Moses.

In recent seasons, Miller has performed on operatic stages including The Metropolitan Opera as Big Stone in Matthew Aucoin’s Eurydice, the Detroit Opera as Ella in a new production of X: The Life and Times of Malcolm X. She also made her debut at the Het Concertgebouw Amsterdam as Fricka in a performance of Die Walküre, conducted by Jaap van Zweden, and in the U.S. she joined the Chicago Symphony Orchestra to sing Mamma Lucia in Cavalleria Rusticana under the baton of Riccardo Muti. She performed her signature role of Erda in Siegfried with Lyric Opera Chicago and gave further performances of Erda in Das Rheingold at Teatro Real, Madrid before returning to The Metropolitan Opera to sing the First Norn in Götterdämmerung, and to Boston Symphony Orchestra where she sang Schwertleite in Die Walküre at Tanglewood. In the U.K. she sang at the Edinburgh International Festival with Sir Andrew Davis, and at the Brighton Festival, she performed Tippett’s A Child of our Time with the Philharmonia Orchestra. Other recent highlights are performances with the San Francisco Opera, Semperoper Dresden under the baton of Christian Thielemann, the role of Amando in Le Grand Macabre under Sir Simon Rattle with both the London Symphony Orchestra and the Berlin Philharmonic, as well as Verdi’s Requiem at Staatsoper Hannover. 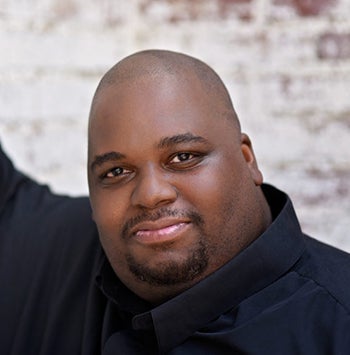 Dramatic tenor Limmie Pulliam, Oberlin Conservatory alumnus, class of 1998, has thrilled audiences with his captivating stage presence and his “stentorian, yet beautiful,” sound. Pulliam’s 2022-2023 season sees him join the roster of the Metropolitan Opera for the first time, covering Radames in Aida. It also includes the role with Tulsa Opera for its 75th anniversary gala, as well as his debut in the role of the Prince in Rusalka with the Portland Opera. In concert, he debuted with the San Diego Symphony singing Verdi’s Requiem and made his Carnegie Hall debut performing The Ordering of Moses in collaboration with Oberlin Conservatory. He also joined pianist Mark Markham for “operatic greatest hits” concerts and spiritual recitals with the Lincoln Symphony Orchestra and Delta Symphony.

The 2021-22 season saw Pulliam in his company and role debut with the Los Angeles Opera as Manrico in Il Trovatore. He made two significant orchestral debuts, singing the title role in Otello with The Cleveland Orchestra and Beethoven’s Ninth Symphony with the Philadelphia Orchestra under the baton of Yannick Nézét-Seguin. He also joined Vashon Opera as Turridu in Cavalleria Rusticana, performed as Otello with Livermore Valley Opera, appeared in a concert of opera’s greatest hits with the Lyric Opera of Kansas City, and joined the Memphis Symphony for Beethoven’s Ninth Symphony. He also performed with Madison Opera in their “Opera in the Park” concert, and at the Bard Music Festival as Albert in Rachmaninoff’s rarely-performed The Miserly Knight, led by Leon Botstein. 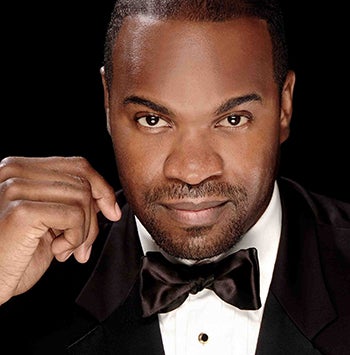 American baritone Eric Greene’s opera engagements this season include Benny "Kid" Paret and Benny Part, Jr. in Terence Blanchard’s Champion with the Metropolitan Opera, as Trinity Moses in Kurt Weill's Aufstieg und Fall der Stadt Mahagonny with Komische Oper Berlin, the title role in Rigoletto with Opera North, title role in Dallapiccola’s Il prigioniero with the London Symphony Orchestra under the direction of Antonio Pappano, Escamillo in Carmen with Liceu Barcelona, and in Porgy and Bess with Musikfest Bremen and Quincena Musical of San Sebastian. He will also appear in Beethoven Symphony No. 9 for La Fondazione Arturo Toscanini with Fabio Luisi conducting as well as in Nathaniel Dett’s The Ordering of Moses with the City of Birmingham Symphony Orchestra and Oberlin Conservatory’s appearance at Carnegie Hall.

Green's recent engagements include Wotan in Das Rheingold with the City of Birmingham Symphony Orchestra, Porgy in Porgy and Bess with Theater an der Wien and the English National Opera, Monterone in Rigoletto in his debut with the Royal Opera House at Covent Garden, in the title role in Nixon in China with the Scottish Opera, as Amonasro in Aida with Opera North, the leading role of Oberon in Hans Gefors' Der Park with the Malmö Opera, and as Donner in Das Rheingold and Gunther in Götterdämmerung with Teatro Massimo in Palermo. He also performed Mozart's Requiem with the Cincinnati Symphony Orchestra, and Beethoven’s Symphony No. 9 with the City of Birmingham Symphony Orchestra conducted by Sir Simon Rattle. Greene has also appeared recently with Salzburger Landestheater, Teatro dell’opera di Roma, Teatro Real, English National Opera at the Barbican, Lyric Opera of Chicago, Atlanta Opera, Sydney Symphony, the Spoleto Festival, Washington National Opera, and the Casals Festival with the Puerto Rico Symphony Orchestra.

Ben Johns, visiting professor of choral activities at Oberlin, has conducted ensembles at the University of California, Davis; Hobart and William Smith Colleges; the University of California, Irvine; and the Eastman School of Music; and he has guest-conducted for Sonoma Bach, Clerestory, and Men in Blaque. He also served as artistic director of the Torrance Civic Chorale and San Francisco-based Musae. Johns was director of education for the professional vocal ensemble Chanticleer, where he established the organization's first National Youth Choral Festival. Under his direction, Chanticleer's education program won Chorus America's Education Outreach Award. Johns has sung professionally as a choral artist and soloist at venues around the world, including the Musikverein in Vienna, the Concertgebouw in Amsterdam, the Paris Consulate, Tokyo Opera City Concert Hall, National Theater Taipei, Walt Disney Concert Hall, and the Hollywood Bowl. In addition to singing with Chanticleer, he has sung with the San Francisco Symphony Chorus, American Bach Soloists, Seraphic Fire, and the Los Angeles Master Chorale.

Gregory Ristow, director of vocal ensembles, leads the Oberlin College Choir and Musical Union and teaches courses in vocal chamber music and conducting. In addition to his work as a choral conductor, Ristow is in demand as a teacher of Dalcroze Eurhythmics. He conducts the Interlochen Singers and teaches Eurhythmics at the Interlochen Arts Camp. He has conducted the Indianapolis Chamber Orchestra, Houston’s Foundation for Modern Music, and the Voices chamber choir in Rochester, New York. Ristow previously served as  artistic director of Encore Vocal Arts in Indianapolis, and director of choirs at DePauw University's School of Music, the Rochester Institute of Technology, and at Lone Star College-Montgomery.