After I had finally committed to Oberlin, one of the things I was most anxious to find out was what my life here was going to be like. I remember scrolling through blog entries, trying to get a good idea of how my dorm and life were going to feel. To try and eliminate some of that stress for incoming freshmen, I thought that I’d give a little overview of the student housing process, do a little dorm tour, as well as a short description of some of the housing options for freshmen.

Most incoming freshmen are going to end up living in one of the designated freshman dorms: Kahn, Dascomb, Fairchild, Burton, or Barrows. I personally live in Kahn, so I’ll give a little overview of the other dorms before I get to mine. Fairchild is the only freshman dorm that’s on South campus other than Dascomb. It’s close to multiple dining halls, including Lord/Saunders in A House, Heritage in Talcott Hall, and most conveniently, Clarity in the basement of Fairchild itself. Clarity serves meals that are generally friendly to those with dietary restrictions, including those with allergies as well as vegetarian or vegan eaters. Dascomb is within Wilder Quad, a short walking distance from Mudd Library and Wilder, the student union that contains two places to eat, Decafe and Rathskeller in the basement.

Two of the other freshman dorms, Burton and Barrows, are both on the North Quad. Close to the Science Center as well as the Noah, East, and Barnard dorms, they’re closest to Stevenson dining hall and Wilder in the other direction. Barrows has a generally negative reputation for its bathrooms and less than stellar laundry situation, but all my friends who live there have a very close relationship with each other because of it. Burton, on the other hand, is a massive dorm with four floors and two wings. I always get lost when I go in there, but they’re pretty standard dorms as well. All of these buildings have communal kitchens as well. I'll leave the freshman dorm I live in, Kahn, for last, though, so I can show you all my little setup!

Aside from these freshman dorms, freshmen can also apply to live in theme and identity housing. There are various dorms for languages if you are interested in being around other students who speak the same language as you, such as German House, French House, Spanish House, and Russian House. As for identity housing, there is A House, for students of Africana heritage, Latinx House for Latinx students, Asia House, for Asian students, as well as Baldwin Cottage and Old Barrows, which are both dorms for women and transgender students. For theme housing, there is the sci-fi hall in Langston as well as substance-free housing in Noah. You can also apply to live in a co-op, which deserves its own post in itself, so I’ll leave that for now.

Finally, across the street from East and directly next to Stevenson, there’s Kahn, where I live. Kahn has a reputation for being the fanciest, nicest dorm, since it was built most recently. Kahn does have a very nice kitchen, in addition to having a game room with a ping pong table and pool table, although the pool balls are an assortment of odds and ends. We also have three open common rooms, one with a grand piano, as well as a room with a TV. There are also two practice rooms, one with an upright piano.

However, here’s the most exciting part of Kahn: my room! 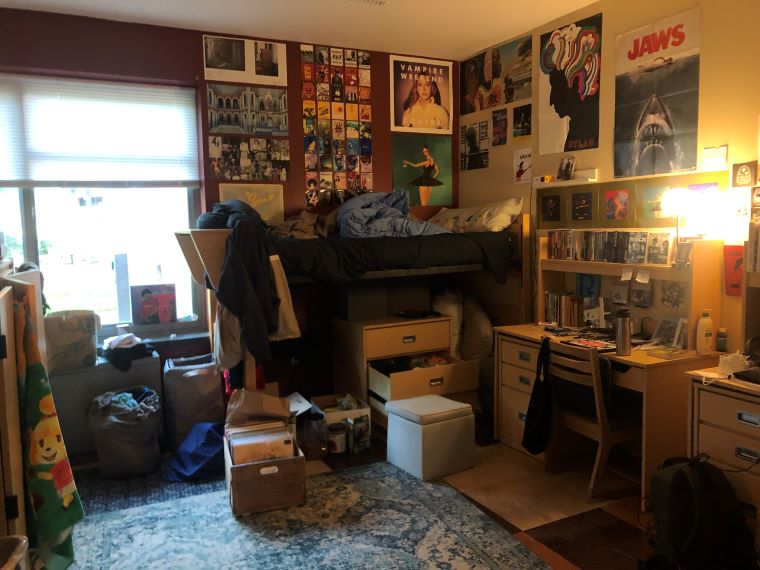 This first photo shows the view from the entrance to the room, with our window, dressers, and my roommate Raghav’s bed. I love his wall of movies that he loves above his bed as well as his crate of records (a few of mine have found their way in there too). 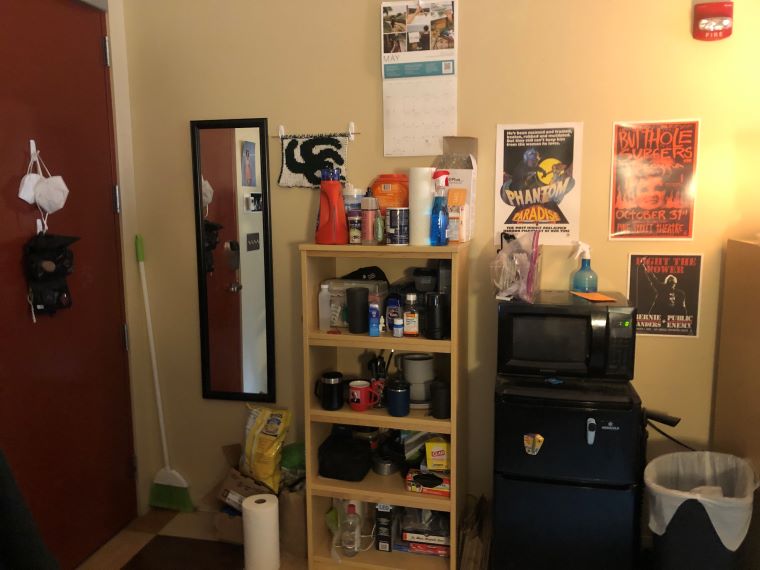 Next to the dressers we have a mirror, a shelf, and our microwave/fridge/freezer combo which we rented from a company affiliated with Oberlin who moved it into our dorm before we got to campus. Also note the cute little tapestry I knitted! 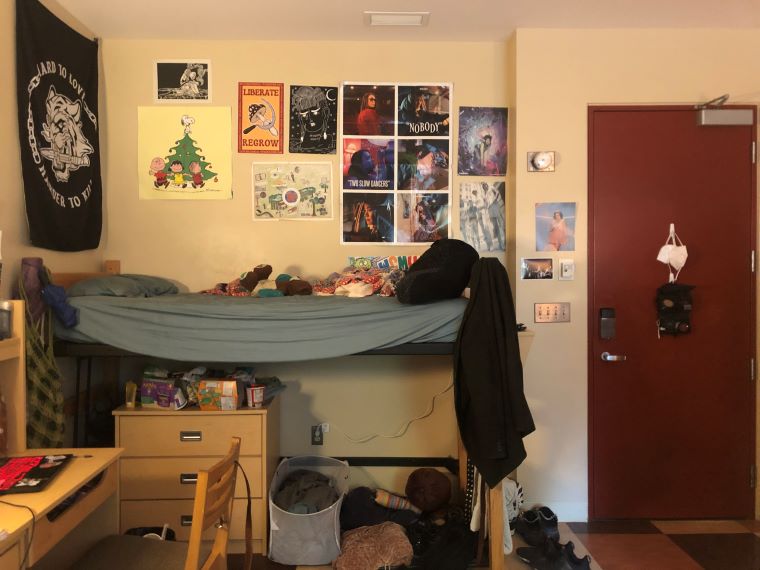 My bed is closest to the door, lofted with my drawers underneath. 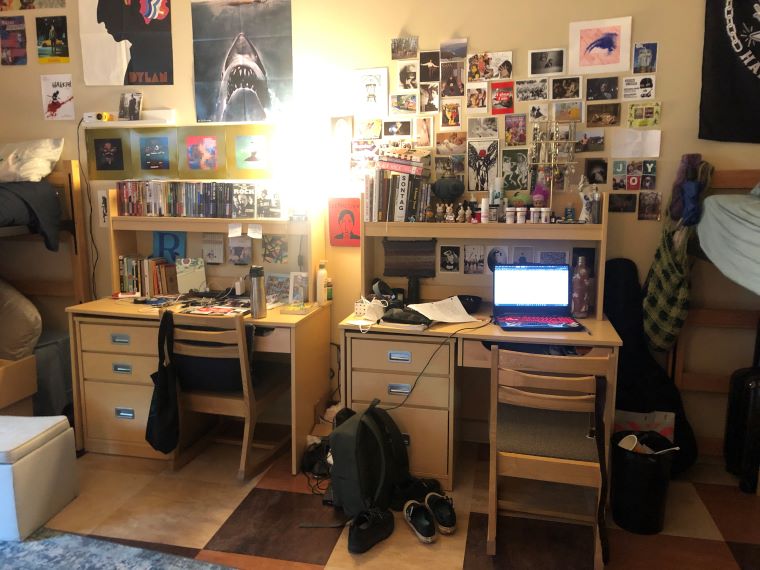 Finally, here’s a view of both of our desks. I’m personally very proud of the little photo wall I’ve accumulated and I’m going to be very sad to take it down! On the shelf above my desk I’ve got way too many books, a few calico critters and other tchotchkes I’ve acquired here, including my troll dolls, my jewelry stand and various other medications and things. Raghav has his own little personal collection of DVDs displayed on his shelf which he is very proud of.

The housing process at Oberlin begins in June or July when you will receive an email or message from Oberlin. They will ask you a little bit about your living preferences, such as whether you are a smoker or an early/late riser, as well as your preference of dorm. If you have a roommate in mind, there is a place where you can put each other’s names to request each other, which is what I did. Otherwise, you will likely receive a room randomly unless you request housing accommodations. If you wish to live in theme housing, or in Kahn since it is the sustainability dorm, you will have to fill out an additional application. Finally, you will receive an email with your roommate and dorm assignment.

I hope this article eased some of your anxieties about the housing process. It’s stressful for all of us but having an idea of what to expect can help you plan what rooming situation you think would be best for you. I should say, though, since Oberlin has enrolled so many students in the past couple years, placing everyone in housing has definitely been difficult, meaning lots of people don’t end up with their first choice. The one good thing to know is that older students get more priority for housing, so if you don’t get the housing you want this year, there’s a better chance you will next year. Either way, I hope you find the housing process relatively painless and I know that wherever you end up, you’ll find a way to make your space your own. 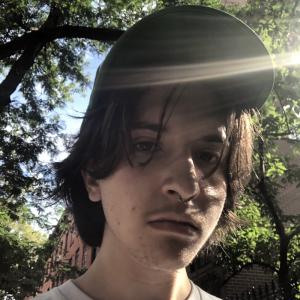