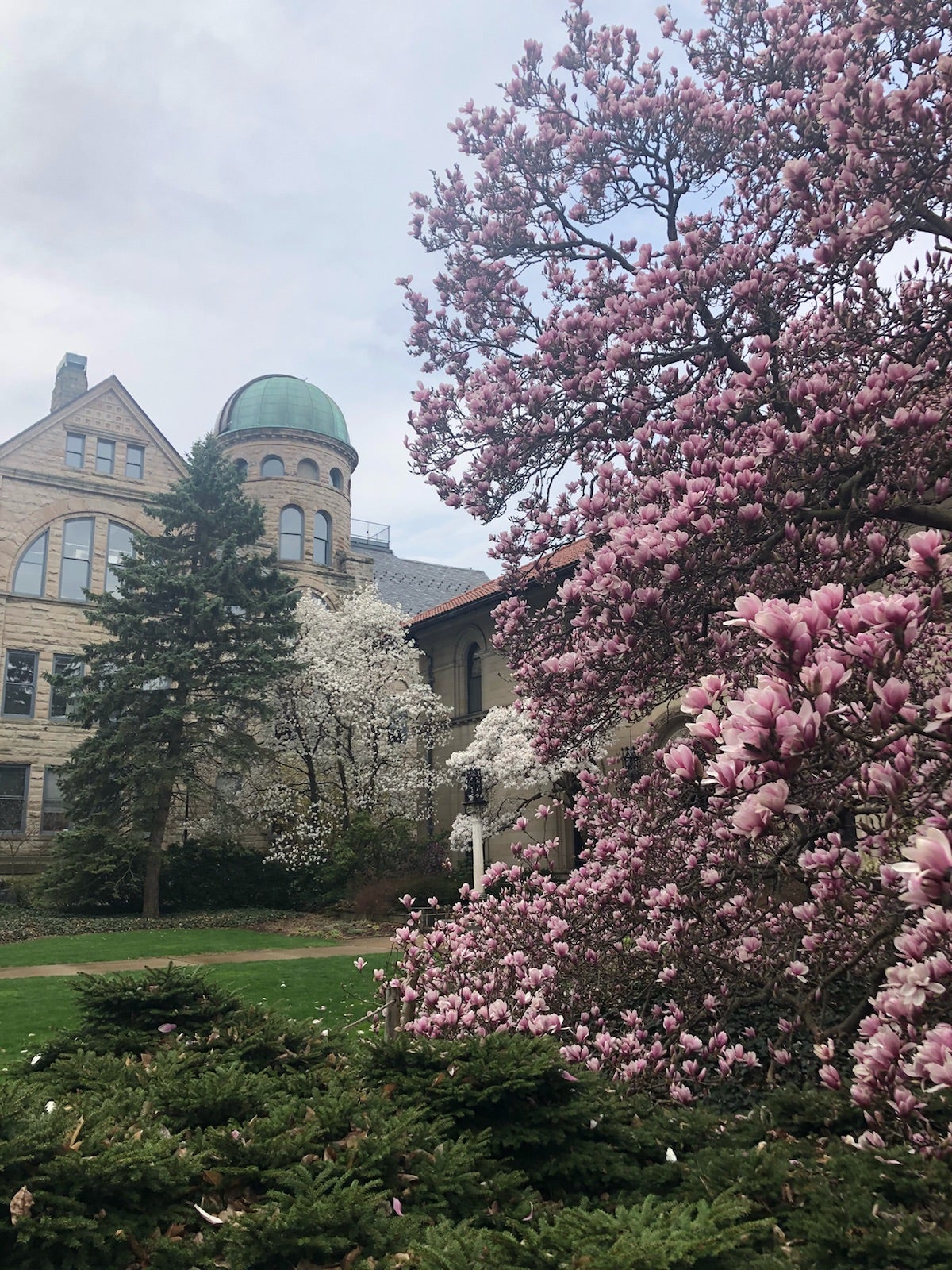 My single favorite day of the school year is when all the flowers in Oberlin start to bloom. It’s impossible to predict exactly when this glorious event will take place and it usually happens much too late for my impatient taste, but it is always worth the wait. This day unofficially signals that Oberlin students can begin shedding our many winter layers, break out the birkenstocks, and finally spend time outside. Wilder Bowl goes from a winter tundra we rush across between classes to the social hub of campus. Hammocks spring up between trees in Tappan. But besides causing flocks of vitamin-D deprived students to rush outside, the blooming of the flowers ushers in what I’ve come to think of as the true holiday season in Oberlin.

Since freshman year, I’ve made it my goal to attend at least one event every week during my time at Oberlin. For most of the year, I have no problem achieving this quota. When April rolls around I find I have to actively restrain myself from going to all the events I want to because if I did, I would have no time to do school work. It’s impossible to describe all the festivities that happen in the last month of school (if you want to see them all check out our packed calendar), so instead I’ve decided to narrow down to my top 5 favorite yearly spring events.

One of the best parts about spring in Oberlin is that as everyone thaws and comes out of hibernation, there’s a lot more mixing between the college and town. Perhaps more than any other event, Folk Fest draws a crowd composed of Oberlin residents from every walk of life along with students. Student and local bands perform during the day on Saturday while featured performers have concerts on Friday and Saturday night. Some of the concerts take place in the gazebo in Tappan Square, so even if you don’t stop to watch, the whole town feels full of music for a few days (even more so than usual, which is saying something for Oberlin). In years past, I’ve seen acts such as Margaret Glaspy and Les Poules a Colin that I still listen to today. This year, I got the unique opportunity to see my English professor perform in his band the Original Crank, which consists of four Oberlin professors. At one point during the performance, when the band was singing to a cheering crowd about laundry as a metaphor for life, I turned to my friend and said I think this is the most Oberlin thing I have and will ever experience. What could be better than a weekend of diverse, fantastic, free music to celebrate the beginning of spring?

Oberlin has tons of opportunities for undergraduate research, and it sometimes feels like there is so much research being conducted that it’s impossible to keep track of what everyone I know is doing. That’s why I love Senior Symposium. It takes place the last Saturday of April and gives seniors the opportunity to show their research to the Oberlin community during 15-minute presentations. I’m definitely biased in my love of this event, because as a Speaking Associate, I get to help run workshops that prep the presenters for their talks. It’s such a cool experience to see everyone go from having nebulous ideas of their research at the beginning of the year to helping them figure out how to best present their findings at the workshop to seeing the polished presentations. Every talk I’ve seen has blown me away. It’s always a reminder of the obvious: Obies are cool and study interesting things. To see some examples, check out the preview from this year.

Ok I may have lied when I said that performance at Folk Fest is the most Oberlin thing I have ever seen, because Drag Ball is a close contender for that title. Drag Ball is the closest thing we have to any kind of spring formal, and it’s way more fun than any other school-sponsored dance I’ve been to in my life. Students go all out in putting together drag costumes (a quick Google image search will give you a good idea of the creativity involved) and gather together to watch drag queens perform—or maybe even perform themselves. Every year, drag queens from RuPaul’s Drag Race come to perform. This year, the theme was Oberlin is Burning and featured The Vixen, Miss Toto, Chi Chi Devayne, and Shea Coulée. It’s super fun to show up and see everyone you know completely transformed and decked out in drag for the night; the experience is completely overwhelming in the best possible way.

I think what a lot of people from outside Oberlin misunderstand is that Drag Ball isn’t just a big party everyone dresses up for. It’s a way for students to explore their identity as it relates to gender and sexuality, a celebration of the roots of drag culture in queer POC spaces, and an affirmation that Oberlin strives to be a community accepting of all identities.

TGIF is a weekly event that happens (logically) every Friday afternoon in Wilder Bowl during the spring. There are always student DJs and drinks to buy if you are of age. Basically, it’s an event to destress after a week of school and to kick off the weekend. You are pretty much guaranteed to see all of the following during TGIF: someone playing guitar, people doing acrobatics, dogs, a slackline, someone sprawled out fast asleep in the sun, people attempting to study but mostly socializing, someone climbing a tree, and lots of students just happy to be outside after a long week of class. Especially because I have swim practice every day during fall semester, lounging outside with friends for awhile on Friday afternoon in the warm spring weather is the most relaxing thing in the world.

Admittedly, this is lumping A LOT of events together… but there are so many amazing student performances and I couldn’t narrow down to just one. I wrote a past entry about how much I enjoy the Spring Student Dance Showcase and that is just one of the many student concerts I’ve been to this semester. Just over the weekend I went to two of my favorites. One of my friends is part of Nothing But Treble, Oberlin’s oldest acapella group for women and non-binary students. They had a concert on Saturday night that featured the group’s graduating seniors—an event that always makes me emotional. I think one of the coolest parts about all the student performances we have is that so many of them, like all of our acapella groups, are not only comprised of student members, but are directed by students as well. I never cease to be impressed with the talent overflowing this campus.

On Sunday night, I went to a concert featuring the Arts and Sciences Orchestra and the Oberlin Musical Union to see a few friends perform. Both groups are open to students and community members, and lots of residents of Kendal Retirement Community participate in both groups. While the music at the concert was beautiful, my favorite part was looking around at the audience which was about 50% students and 50% Kendal residents, all of us there to support our friends performing together.

Oberlin in the springtime is the definition of vibrancy. Name any genre of music or dance—or for that matter any kind of activity—and I can almost guarantee you can find an event for it at Oberlin during April and May. Besides the events I mentioned, we also have a circus, countless conservatory student recitals, sporting events, Solarity, student film screenings, poetry slams, workshops, swing dancing at the Dandelion Romp, department picnics, and so, so much more.

To be honest, this time of year is super stressful as a college student. I’m tired, finals are right around the corner, I have to pack up my (very messy) apartment to move out next week, and I am scrambling to get the logistics of my summer in order. All the events we have serve as nice breaks from the pressure of everything else going on, but more than that they are a great reminder of why I love Oberlin. In the stress of studying and worrying about the future, I am constantly reminded every time I go to one of these events that there is a reason I came here and that I am so lucky to be part of such a talented, passionate community. 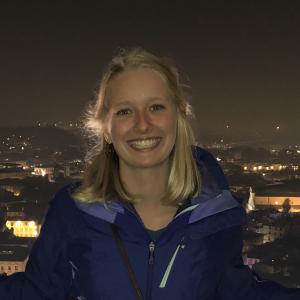