Over the past few months, one word has defined my time here at Oberlin in an insurmountable way. That word? Snow.

While the school is awesome at getting the main pathways cleared so students can get to class, when you're a flat five feet like I am, navigating all other areas can be difficult. So the snow has left me with little choice but to stick to my dorm, Dascomb, and wait out the winter. To some students on campus, this may seem difficult.

But while Dascomb, one of three 1st-year only dorms, is known across campus for its less than flattering nicknames (you might hear a student say "'Da-Scum" or "Who's scummin' it next year?") it actually has a decent rep among its occupants. Or, as a few friends and I put it recently: "Dascomb has a charm about it, but that charm might just be us."

It's not as new and perfect as Kahn is or as close to the rest of the dorms as Barrows is (these are the other two freshman dorms). But Dascomb is all about a single phrase: location, location, location. Equipped with an in-house dining hall (this is a big deal) and centrally located near most classrooms, Dascomb does a great job of catering to the student's daily life. And in the winter, when I'm freezing my face off and tripping on ice every other step, that matters. A lot.

To put it in perspective, I made a final list of the good, the bad, and everything else you should know about Dascomb:


To give a little tour of my home here, I rounded up a few housemates who were willing to let me photograph their rooms. While they all have roommates, I only show their side of the room to give an individual perspective. They gave some commentary as well, and I found it to be surprisingly insightful in regards to the freshman year experience. The overarching theme I found is this: It's not perfect living here, but chances are you'll end up enjoying it anyway. I know I am. 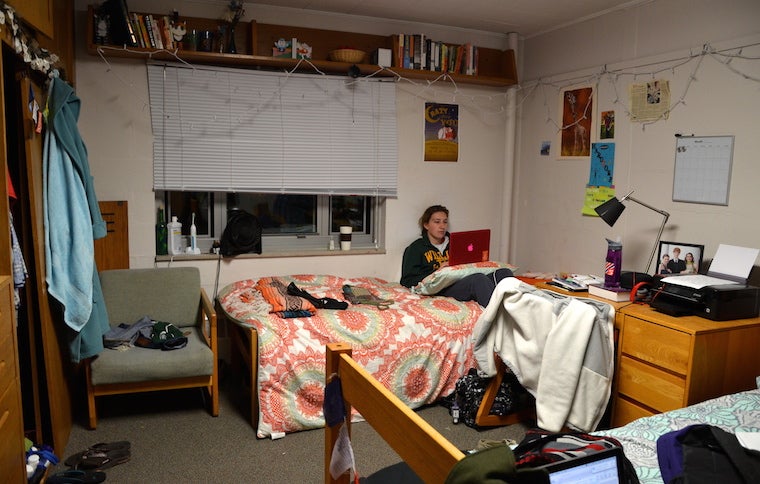 Abbey Bisesi's room is typical of most rooms in Dascomb, containing one wall of built-in storage.

Abbey: It's nicer than I thought it would be...but it's still quite small. Compared to other dorms it's not that great.

What's one thing you would improve about your room?

Abbey: Space! I shove a bunch of stuff I don't need in a suitcase [under the bed]. Under the bed space is very important. Every inch of this room is filled with stuff... I'm organized but it's easy for it to get cluttered--there are definitely days when I spend the entire time rearranging things and maximizing the space.

What's your favorite part of living in Dascomb?

Abbey: I'm even in a co-op and I recognize how super nice it is to not have to leave the building to get food, especially as it gets colder. And the community is really great here--we're all freshmen so we were all freaked out at the beginning of orientation and it was a...bonding experience.

Abbey: Dascomb isn't really as bad as everyone says.... it's not wonderful, but I've stayed in dorm rooms at other schools that are much worse.

Do you have any move-in day advice?

Abbey: Control the weather! Unpack one bag at a time instead of dumping it out into a huge pile of stuff. And don't be afraid to leave clothes at home because hopefully you'll be going home before it gets too cold, so you can always bring stuff back. And dorm life is really different from living at home. You definitely have to be prepared that your stuff will no longer be your stuff.... we live in a community now, as opposed to living in kind of our own separate spheres of the world. That means people have access to your stuff that they didn't previously. And that's okay, because sharing is caring. 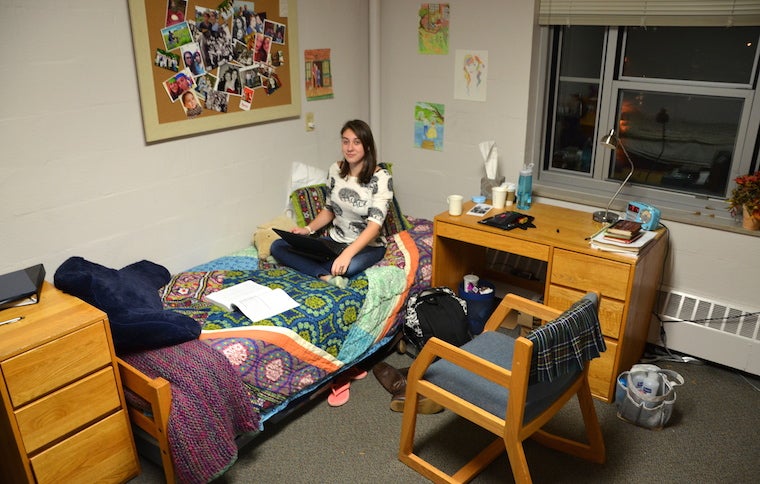 Lily Posner's room is probably cleaner than some rooms here, but the layout is similar to most.

What were your expectations about living in Dascomb?

Lily: I thought that Dascomb was going to be literally insane and everyone would be going crazy all the time...but people only go crazy sometimes! [As for my room] I was expecting it to be really small and that there would be no place to put things, but we actually have a lot of storage. And I was expecting my bed to be really uncomfortable but it's actually really lovely...and I have an awful time getting out of it in the morning.

Lily: Good. Lots of space. I don't think we've even filled it all up yet.

Will you describe the "Dascomb experience"?

Lily: It's super friendly. You can be social if you want to be or you can just do work in your little zone. But if you ever need a study break or you're just bored and want someone to talk to, you can go and knock on anyone's door.

Do you have any move-in day advice?

Lily: Get here early; keep your door open (invest in a door stop). Also...everyone has a tendency to over pack and bring stuff you don't need. But bring quarters because laundry is expensive! That's a down side of Dascomb, or just of college in general.

Lily: I feel like I'm in the greatest spot on earth and all the other freshmen dorms...there's no place I would rather live than Dascomb. Everyone's here; everyone's friendly. You don't have to leave the building to eat. There are all kinds of people and you can totally find your place here... I'm happy as a clam. 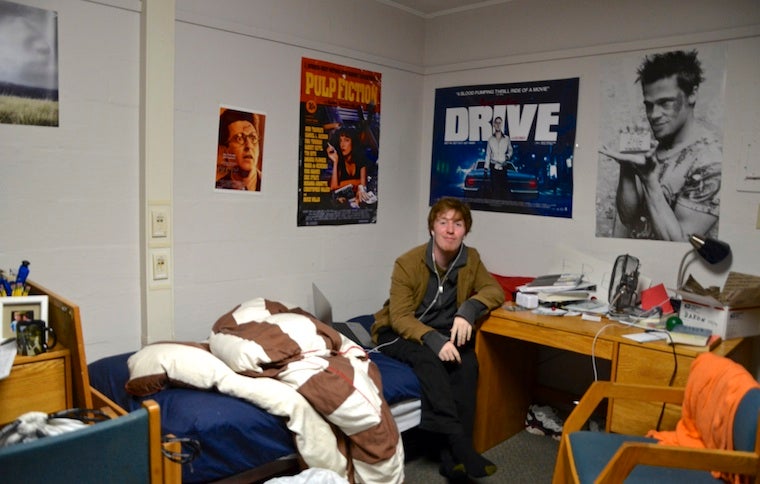 Jacob Maximillian Baron, as you can tell from the decorations, is a future cinema studies major.

What were your expectations about your room?

Jacob: I thought it would be tiny and boring and horrible...and it's actually cozy. I actually have the perfect amount of space. Any less or more would be too little or too much, respectively. I have no problems with it.

Jacob: You sort of feel a pressure to be best friends with your college roommate but, you know, it's best if you just let it be what it is. Better to not talk than to be fighting.

Jacob: Everyone is so open to socialization here which means that you sort of have to take the first step but then they'll take you the rest of the way (as far as I've seen).

Jacob: Don't have it be your mission to become a different person in college because it will happen whether you let it or not. So let it take its natural course in college rather than trying to force yourself into a new position. And try to be as vulnerable as possible, because otherwise you're going to have a hard time.... if you have your guard up, you're going to miss out on a lot of experiences. And also you're just going to get offended or disturbed by things that otherwise would have been fun. 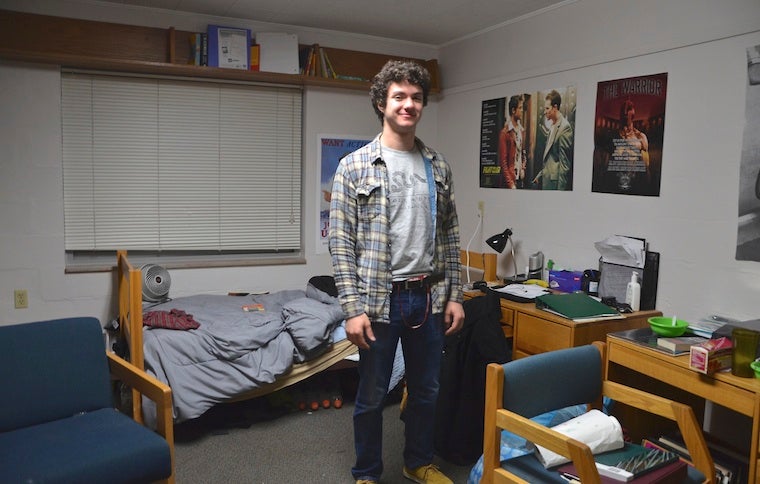 Ethan Cohen is in the Conservatory of Music, so he has one of the shortest walks to class.

Ethan: It's all right. It's pretty small. My side specifically is pretty messy. It's a typical dorm room, no complaints.

What were your initial expectations of your room?

Ethan: I was expecting a typical dorm room with musty cabinets and an ironing table from the 1980s and that's basically what I got.

Ethan: I'm fine with storage--storage is cool. I throw most of my stuff on the floor so it doesn't matter. I am pretty messy, i.e. most of my clothes end up on the floor. 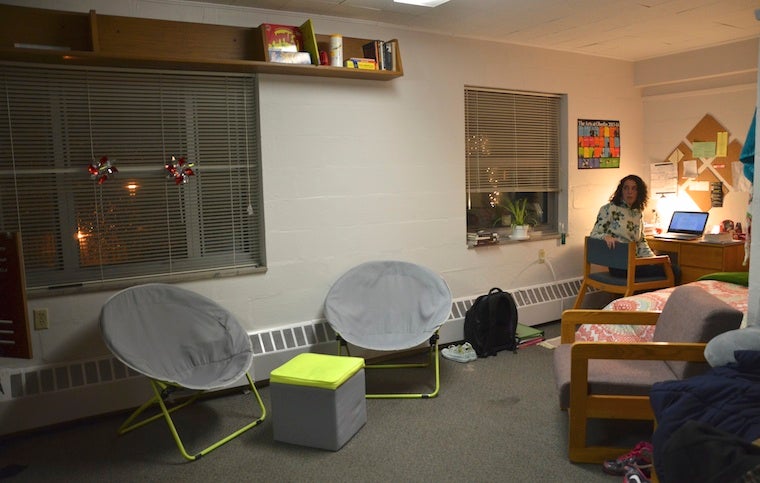 Mattea Koon ended up with a corner room that is much larger than normal dorm rooms, but warmer, too!

Mattea: We definitely have enough storage. The only complaint is that the cabinets and bookshelves are slightly too high. You basically need a stepstool. [Author's note: I second that critique.]

What's your favorite part about living in Dascomb?

Mattea: Definitely the community because in a sense it's all first-year students and we all get to know each other so well. I have so many friends on this floor, not to mention having the dining hall within the dorm is wonderful. 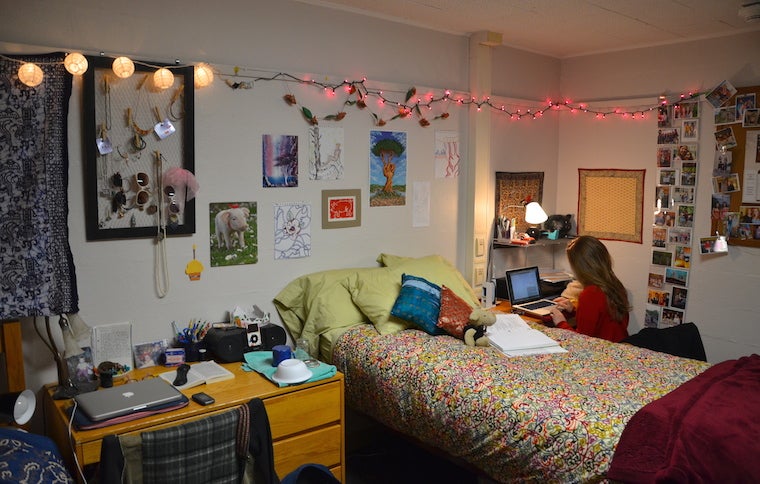 Amy Weintraub's room takes the award for most envied dorm room of all time, doesn't it?

How does Dascomb compare to your initial expectations of it?

Amy: I think it kind of actually exceeded my expectations, especially in terms of storage--there's a lot more storage than I expected. I think in general Dascomb smells funny on occasion. But I really like Dascomb quite a bit and I like that it has personality.

What's your favorite part about living in Dascomb?

Amy: I think the best part of living in Dascomb probably is the people. I think the people here are some of the coolest people on campus. Dascomb kids are kind of exactly how I picture Oberlin kids.

Amy: Well, third floor smells really bad. But I think the worst part is probably that you can hear through the walls. Everything. So I feel like I don't have that much privacy.

What would you change about your move-in day experience?

Amy: I think it probably would have been better if my parents had given me a little more independence on move-in day. 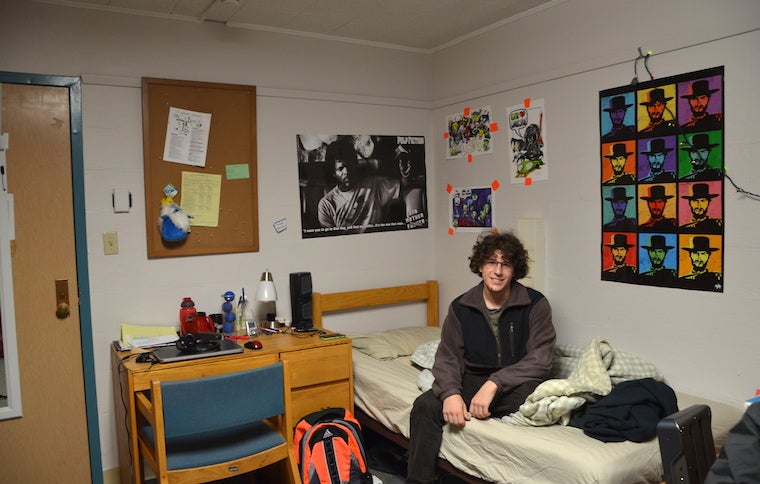 Lucas Brown's room is also fairly typical of a room in Dascomb.

What were your initial expectations of your dorm room?

Lucas: I actually thought it was going to be a bit smaller than this. I wasn't expecting much. I'd seen dorms in other campuses and they're usually kind of small.

Lucas: We're both a little too short to reach most of the storage but we definitely have enough space to store anything we need.

What's the best part about living in Dascomb?

Lucas: The community, like everybody kind of knows everybody. It's also really nice having a dining hall downstairs so you don't have to leave the building when it's cold out if you don't want to. And it's a pretty central location on campus. There's nothing that is that far away either.

Lucas: Compared to some of the other dorms it's not the best living conditions. It's a little dingy, but that's to be expected. There's not that much I dislike.