Just to save you the suspense, I'll begin with a screenshot of my calendar from early this semester: 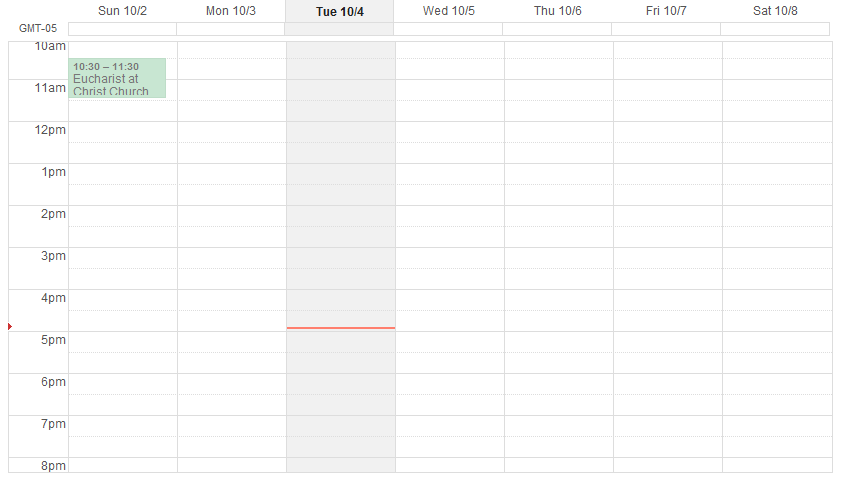 The point is not that I didn't use Google calendar. It's that early this semester I was prioritizing things that don't fit there. Conversations with friends. Spontaneous cookies. Cuddling up in the couchboat1 to chase the blues away. I was trying to "be a person first and a student second," and it wasn't working out so well:

I could have done it the night before if I'd checked. But instead Lindsey and I baked cookies shaped like hearts and squirrels, and wrote love letters for our friends in the throes of judicial action, and I hand fed my chicken a pear dipped in antibiotics.

Sometimes I feel cloistered here - safe and spiritually grounded, but disengaged from the problems all around me. Lately, for instance, I've worried a lot about food. Where does our cane sugar come from, anyway? Who died to sweeten my tea? Global problems — the abuse of people or the misuse of land — have a local home in my stomach. But without a sugar-beet farm or a team of investigators, there's not a lot I can do about it now.

How to fit the real world into Oberlin? That's something a lot of us struggle with. OSCA helps, in some ways: being part of our own food chain, eating as a community, deciding community standards for ourselves. But it can also be insular in a way a dorm is not. There's so much to talk about down in the couchboat. Why leave Harkness at all?

Campus jobs can be a slice of 'real life' too. Right now I have three: this one, of course; official printer/lab technician with the Center for Information Technology; and, as of this week, a job as a groundskeeper at the AJLC. The chickens are completely dependent on me; the printers, though less vocal, require just as much care. The time I spend working sometimes surprises me, but I consider it time well spent.

Of course, every student finds zir own balance, and most people I know are actively, vibrantly engaged in the community and the world. (Look here (Oregon: Alis Volat Propriis) and here (Saints and Sinners: Two Days in Altar) too just for starters.) I can't even scratch the surface of my friends' activities in the community, but the Bonner Center is a good place to start.

But there's just so much real life that I don't see — not because of Oberlin, but because of the world into which I was born. Last week I collected a few cups of white acorns and decided to roast them with honey. I imagined I'd need an hour or two to shell them, leach them, drizzle and toast them. Four hours later I was trying to scoop boiled acorns out of their shells while simultaneously mixing vegan chocolate cookie batter for Sam's Thursday meal. It's hard work to do the simplest things from scratch.

Imagine — as I mused to Sam with one hand on the cookie spoon and one hand opening the oven — making sugar cookies really from scratch. A plot of land and some seeds in a temperate zone. Okay, you can also have a cow (because you can't have a soymilk factory). Imagine growing the wheat and sugar beets, threshing and milling the grain, milking the cow. That's the life I want. It makes more sense to me than getting food in bags, even big, brown-paper bags with organic food in them.

But after a few weeks of angsting, I have settled back into campus life with a quiet and comfortable joy. There's no sense in declaring life less or more real — thus the addition of quotes around real world — and it helps to gain some perspective. Sometimes I worry about the fact that none of the money that is sending me here belongs to me. But lately I've realized more fully that none of the time does either. I've been trying to live my faith more fully, and part of that is utter dependence on God. If this is where I'm supposed to be right now, I'll embrace it. And I have. I love it here, and despite fantasies of living a little wilder and working for my sustenance, there's really no one place I'd rather be.

The last few weeks have been easier. Instead of building cages from my classes, I've thrown myself at them. There's time for goldenrod dyeing and walnut fermenting2 and making knotweed flutes, but all those things come after chemistry study group. (Plus, the walnuts pretty much ferment themselves.) I've had time over Fall Break to put the garden to bed and make all the knotweed whistles I could want. But I'm also studying up on plant development and blood composition and thermo, because this universe amazes me, and I don't always have to be outside a classroom to learn about it all.

[1]Couchboat n. two couches pushed together to make an island of warmth and happiness. Suitable for: cuddling, conversation, storytime, falling asleep. Not recommended for: homework.

[2]Probably not what you are thinking. Walnuts are surrounded by a thick, fleshy fruit that can be cut apart but is best left to rot away before cracking the shell to get at the nut. The fermented fruit can also be made into a semipermanent ink. If you are curious about goldenrod dyeing or knotweed-flute-making, leave a comment, please!

Love this. And you. I'm glad you feel comfortable here again. Also, how did your knotweed crafts turn out?!

I need a couchboat in our office.

What's a knotweed? How do you make flutes from it?

What an amazing post, complete with a chicken picture! I really liked reading your reflections; I find myself thinking about a lot of the same things. It's good to hear how you've made peace with the Oberlin experience, while remaining critical.

This is a wonderful post! It is such a challenge to balance academics (the reason we're all here, right?) with the richness of life at Oberlin AND engagement with the world outside, and to stay happy and grounded while doing it. I love your perspective on things, and I'm so glad we have you here -- both to share these thoughts and to make us delicious food :p

Aw, thanks, Ida. Re: flutes, I kept working on the recorder but with no luck. I think I will make a flute like yours, instead. By the way, I obtained your linseed oil and am holding it hostage to be ransomed with one plastic ruler.

Ma'ayan: knotweed grows ten feet tall and looks like bamboo; it grows all up and down the banks of Plum Creek. It's invasive, but also edible and very useful!

This video, starring Ida and Tuck, shows an intermediate (and highly amusing) step in the creation of a knotweed flute. Once they are done they look like the one Ida made and is bringing to the next Contra dance (right?).

Thanks, Nora! I hope you've made your peace, as well.

Eli, I didn't think to take pictures of the finished flute, but I'm sure Ida can be prevailed upon to show you. Also, when are you back and will you be hungry? You should come have pancakes. Because I haven't made them in weeks.

I want to point out that, on the Sunday in question, you made me (and Lindsey) a chocolate cake for my/our birthday, which absolutely made my entire week.

I think this is one of those things that Obies struggle with all the time. I thought I was going to be good at prioritizing things this year based on What I Have To Do and What Will Make Me A Good Person And Improve My Life. Well. Hmph. Not all of the things in the second category will fit into my schedule. You, however, articulate this very well in this blog post! You are a great friend, and labs don't matter.....well, only kinda, but I think you have your priorities right!
Nephron cookies=much more pleasant than real nephrons

You write how you talk and are a wonderful person. I need to meet your chickens--I found the feather you put in my hair on my pillow this morning.

Griff, I miss you and the couch boat. You're awesome. I am going to be so productive all the time while you are in Costa Rica and it is going to be terrible. Except that you will be doing awesome stuff and I will be learning Greek and working out a lot, so it will actually be great. Have fun, bro.
-Kye