Mission: devote myself to a work exchange on an organic farm.

I went to a place I'd never been because I'd never been there. I went to a place with lots of manual labor to be done because I was craving it, and because my presence there would be a help to my hosts, and I was craving that too. I love being at Oberlin, but even a semester of mental backflips just can't meet my artsy-craftsy, make-things-with-my-hands needs, nor does it let me fall asleep at night knowing I spent my day improving someone else's quality of life. My Winter Term did.

Altruism aside, I had some more learning-oriented goals in mind for my three weeks farming. Most of them crystallized for me after I starting thinking about food and what its life had been like before it became food. It was by complete coincidence that my Winter Term project ended up being directly related to this recent problem of mine; nonetheless, I was interested to see how familiarizing myself with the producing end of it would shape my thoughts on the subject.

There was certainly plenty of new stuff to familiarize myself with on the farm. That, and I'd never been further west than Alabama, so, as my hay stacking partner put it while he taught me to buck bales of hay into position, "that's a culture shock, coming here." Couldn't deny that. I like culture shocks, though! You never know how learning about other people will change the way you perceive your world. The first thing - and the first difference - I saw when I climbed out of the car after arriving in my temporary new world was the Milky Way. It was big. It was bright. My hostess said something like, "Nice, huh?" Nice didn't even begin to describe it, but I would come to recognize this nonchalance as a defining characteristic of life in Chiloquin.

"Busy" also quickly became the norm, not to mention an understatement. We took some breaks, like the Saturday my hosts drove me up to Crater Lake along roads carved out of seven feet of snow. Seeing the deepest lake in America was great fun, as was learning to stand up after collapsing with skis on my feet. (I can't really claim that I learned to ski with skis on my feet.) Other than that excursion, though, I mainly worked like crazy. 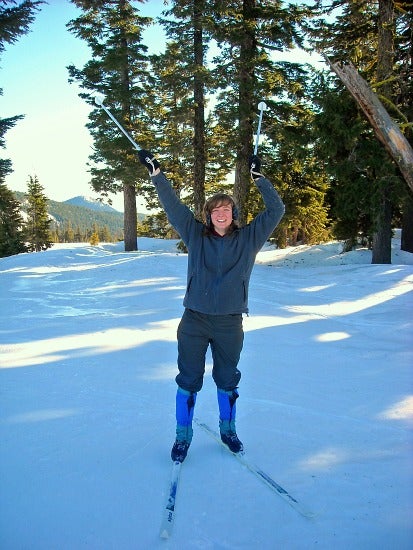 This is me, excited that I am neither working my butt off nor crashing on it.

My hostess teaches at the Chiloquin Elementary School, so for my second week there, I volunteered in her classroom. She was overjoyed; with twenty-nine third graders to manage, my presence saved her from complete chaos more than a few times. (They were making life-size, 3D sea creatures all week. So much excitement. So much butcher paper.) After watching her class go through their daily grind for a while, I ended my stint as helper with a serious paradigm shift about the impact teachers have on a child's life; I used to think I'd never want to be a teacher. Now I think I'd never be able to hack it. I just can't see myself having such boundless reserves of energy, not to mention such angelic patience. 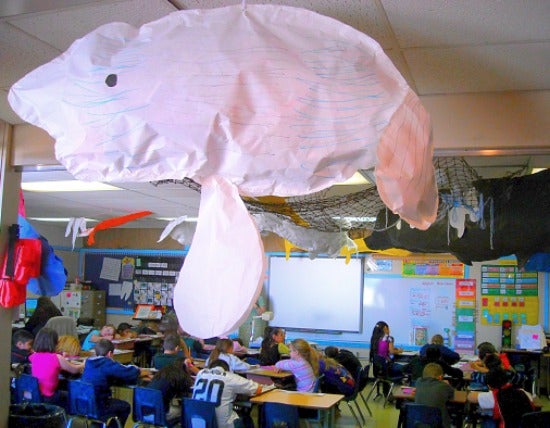 A giant manatee stuffed with paper. You can kinda see nets and more creatures hanging in the background.

When I wasn't getting the life force sucked out of me by small children (or zumba-ing with teachers afterwards), I was breaking ice on sheep troughs, chopping kindling for the wood stove, or doing whatever else needed to get done around the farm. A typical day would find me getting up at eight and going to sleep around ten - yes, that's ten hours of sleep, be jealous - and spending the other fourteen hours doing chores. Doling out good hay to sheep and moldy hay to the vegetable garden; cleaning and oiling all of the tools on the farm; replacing the wood chips in the chicken coop; treating the ram for hoof rot; dealing with the snow and ice... There was a lot to do. I particularly enjoyed cleaning out the chimney, both because standing on roofs looking out over a world of snow is exhilarating and because what better opportunity is there to sing the chimney sweep song like twenty times in a row?

To my dismay, the world of snow turned into a world of suddenly unfrozen sheep poop during the second week. But I forgive the weather, because it brought with it the discovery that sitting on top of a stack of hay bales taller than a house with an engrossing book is an oft-overlooked joy in life. I took full advantage of this joy while I had the chance. My host was more than willing to indulge my curiosity about the morals of food, so the books I took to the haystack were often the ones he'd read in his own food quest; in general, both of my hosts were wonderfully generous about accommodating my newfound unwillingness to eat anything that might have come out of a factory farm. They shared with me not only knowledge about the importance of organic farming, but also a leg of a lamb they'd raised, and salmon they'd bought directly from the local Native Americans who'd caught it. Delicioussss.

My host took charge of my agricultural education, but it was my hostess who introduced me to fiber arts. She has a whole cottage industry based on their sheep! Plain fleeces are hard to sell, but she taught me how to do a lot of what business models call "value adding": washing the wool, combing/carding it into roving, spinning the roving into yarn or felting it into objects*. I failed a little at the spinning, but made my first attempt into a ball of one-ply yarn anyway. My felted animals turned out slightly better: 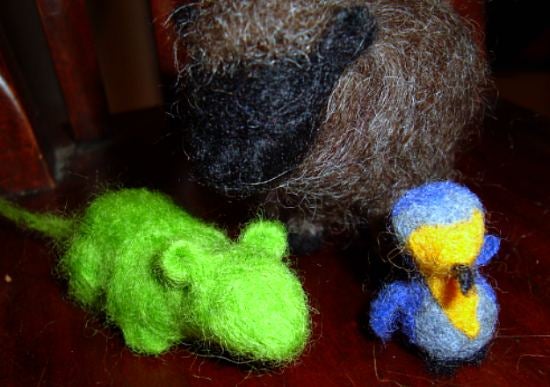 That bird is smaller than the last joint on my thumb, I kid you not.

All in all, Oregon turned out to be an even richer experience than I had anticipated. If you had asked me a year ago what I thought I'd be doing in January, I never would have guessed that this would be it. I am, however, extremely pleased I took the plunge. I could try to sum up everything I learned about (sustainable agriculture, West Coast culture, independent adult life, interacting with kids, parenting, seasonal ranger work, sheep) but I'm not sure where the list would end. The longer I stayed there, the more I realized that everything I did, including the self-discipline to do anything at all, contributed to valuable twin experiences of adapting to a new culture while shedding some of my reliance on other people to take care of me. Suffice to say that the lessons I learned are not the kind I am liable to forget anytime soon.

*I kept a blog/journal while I was there and wrote a particularly frustrated post the day I combed a batch of roving (it's actually a lot of fun, despite how much I whine here).

Moldy hay can be used as fertilizer? Cool! Efficient, too, I'm guessing.

It's basically just composting itself, really, so it makes for great mulching! And yeah, you better believe we didn't waste things.

Sounds like you nourished every part of yourself this month. Good stuff!

Don't tell my parents, but I very much miss working on the farm where I grew up. We had rabbits and we grew lots and lots of vegetables, but so many of my fondest memories involved being outside with these farmy things all the time.