Although I have written before about my favorite places on campus, I left out one very important building, one in which I spend much time doing things of a varied nature. I've had Computer Science and Environmental Studies classes in this wonderful structure, I've participated in poop campaigns, checked out a Living Machine, and seen John Petersen (who answered questions in my alumni blog post) all in the fabulous Adam Joseph Lewis Center for Environmental Studies. The AJLC is so very cool, but not for any one reason I can tell you. The building is smallish, and only moderately attractive on first blush (unlike Mudd, that breathtakingly boxy beaut), but the more you learn about it, the cooler it seems. 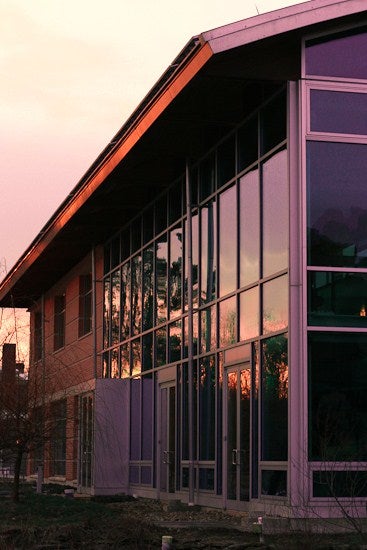 The sign inside the south doors say "Surrounding the Lewis Center is a multi purpose landscape demonstrating ecologically responsible design and maintenance practice." A major problem in many arenas of science and culture is the idea that humans and their property are completely separate and under different laws than the rest of existence. The idea that we are separate from the landscape makes it easy for us to extract from nature rather than learn from it and live within it. 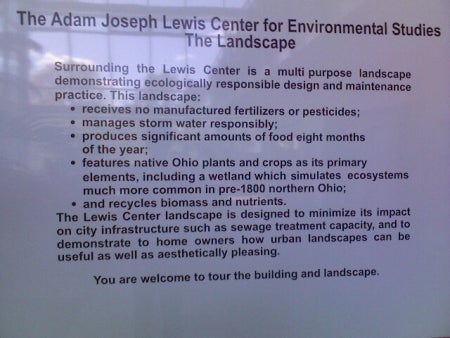 As a future engineer, I accept that part of what I am going to be doing is perpetuating the dominance of humans over nature. Hopefully a bigger part of what I do can be making people fit into the puzzle better and be conscious of connectivity more. The AJLC does a great job of reminding us how we are involved in natural processes around us, and how we can participate responsibly. The building itself is a kind of natural and technological organism, the first of its kind since Michael Douglas. The building has sensors all over that allow it to respond to changes in its environment, just like Michael Douglas. This is turning out to be a dynamite analogy. The AJLC fits into the surrounding ecology the same way a sunflower does. It takes certain things from its surroundings, some close by (the sunlight and rubble from another building that was demolished on campus, now benches outside the AJLC) and some farther away (the desks in the Environmental Studies department office are made from bowling lanes from an alley that was torn down farther abroad in Ohio, the geothermal heating/cooling system uses water pumped from underground, below the frost line), and uses what it takes for structure, temperature regulation, power, and even food, then cycles everything it takes. Its furniture and carpet can be given back to the earth or recycled into new products. The wetlands to the east of the building and the Living Machine inside give shelter to plants, insects, birds, frogs, fungi, you name it sister. The entire building breathes.

The human inclination to try to reduce complex problems to their simplest parts gets us in trouble sometimes (it has with food production, health, and agriculture, in my humble opinion). Part of what I love about places like the George Jones Farm and the AJLC is that they are impossible to reduce to basic elements, because the designers considered so much and made the systems in them interconnected and complicated, like natural systems. If you called the AJLC just a solar-powered building, you would be so far off. If you called if a solar-powered building that cycles and purifies its own water to the point where it could be drunk or dranken, you would again be way off. If you called it a piece of ecological engineering, created in such a way so that its construction would engender no ugliness upstream or downstream, you'd be getting close.

I'm certainly not the first person to say this, but part of the change I think needs to happen with human society in order to sustain itself is a move beyond ideas about recycling and efficiency into a paradigm where people are part of the environment around them very directly. Gardeners, construction workers, even farmers have a certain stigma about them, an idea that they are dirty. We have an industrial attitude towards where our computers, clothes, and food come from. It is strange to think that the average person today doesn't know how to do the two things everybody had to know how to do 200 years ago, build a house and get food from nature. If you know how to build a house with a hammer and nails, you are even kind of looked down on. If you regularly hunt deer or work on a farm, the same thing can be true.

Luckily I feel like I am surrounded by smart, sensible people who want to do good in the world. One thing I see a lot in the college town where I grew up is a lot of students walking across the street. Not really crossing the street, just walking across the street. I wouldn't call it crossing the street, because crossing the street has a definite protocol. Usually you learn this procedure well before kindergarten or first grade. You look left and right, then walk across the street if there are no half-ton machines moving fast enough to do you great bodily injury. Some college students seem to lose the most important part somewhere along the way.Oberlin people remember it - the first part, the looking part, which is really the important part. You don't go anywhere with just the first part, but without it, you wouldn't be crossing streets for very long. Oberlin students have a great deal of sense, and this I like.