Freshman orientation rode in on a heatwave, a sea of cars and suitcases and boxes swept through campus on Tuesday. A swirl of activities — concerts, panels, lectures, lunches, picnics, adviser meetings, course registration — mixed in with the beautiful weather and the bubbly new students made this whole week a social mecca. When things start to settle down, students begin to fit into the life and groove that is Oberlin.

My absolute favorite activity during orientation week is the Day of Service; The Bonner Center for Service and Learning organizes a campus-wide service day for new students. It's a great opportunity to get off campus and into Lorain County, spend a good few hours working hard and making a difference, and meeting other students committing their morning to the good of the community.

Day of Service 2006, during my freshman orientation, started bright and early, with a boisterous group of freshies and an excited site leader or two. The details are a bit hazy, but I do know my site leaders and a group of us boarded a bus to Harrison Cultural Community Center in Lorain, where it promptly started raining and we spent most of the day inside learning about HCCC. In the 45 minutes of sunshine, we speedily painted the window frames on the ground floor of the center a bright magenta. It started to drizzle again, so we concluded our daily activities indoors, reflecting our on location and the service we'd done. As we boarded the bus to head back to Oberlin, the clouds opened up and we saw all the paint streaming off the building into the parking lot.

Even after that first experience, where I felt that we made more work than we managed to do, I was still sold on participating in Day of Service, so every orientation I've been on campus, I've been involved. As an Academic Ambassador the past two years, I've headed out on a bike to photograph various service sites. People have smiled at me wryly at the early morning photoshoot, hammed it up for the camera, and forgotten that I was around while being completely absorbed in weeding, painting, and mulching with new friends.

This year, recent-alum-but-still-in-love-with-the-Bonner-Center me didn't want to leave the Day of Service in the dust, even if I'm no longer a student. It's a defining moment of orientation; after the hustle and bustle of trying to meet everyone from Facebook and sitting outside in the late summer weather till all hours in between all the required events, students have the opportunity to spend time together on a collaborative activity in the Oberlin community. It's early morning, on a weekend, during one of the most exhilarating weeks of the young adult life. If you can wake up and do Day of Service, you can do anything at Oberlin.

Day of Service 2010 started with a few blasts from the past: sunshine on one side of Tappan Square, storm clouds billowing on the other side, with a bit of fall chill in the air. Students were registering at tables lining the sidewalks in front of Finney Chapel, then picking up a box lunch and then joining their fellow servers and their site leaders for warmup games. Right in the midst of hundreds of kids signing releases and running around doing ice-breakers, it began to mist, then drizzle, then pour all over the heads of the excited volunteers. Most groups departed Tappan on foot in the rain, and luckily, upon reaching even the farthest on-foot sites, the rain stopped. This didn't dampen the spirits of most of the volunteers, though, and the rain managed to loosen the weeds and kept the working environment cool throughout the day. 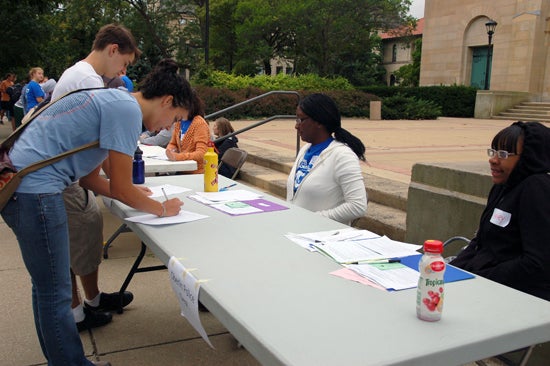 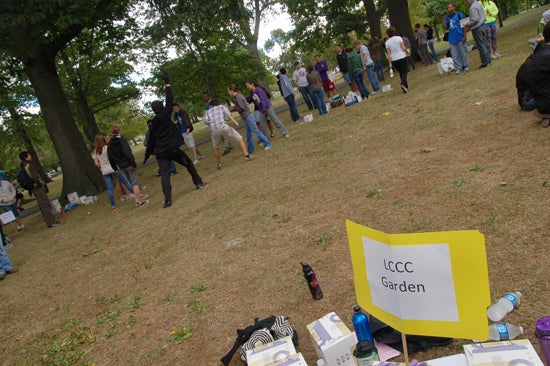 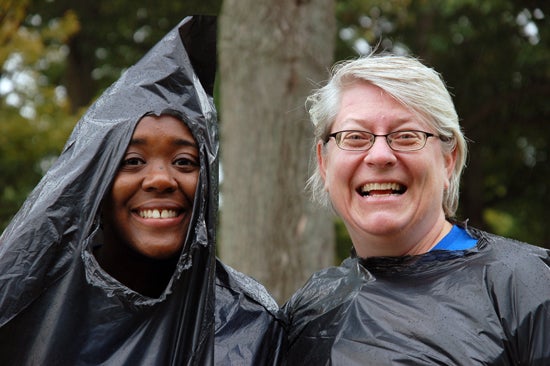 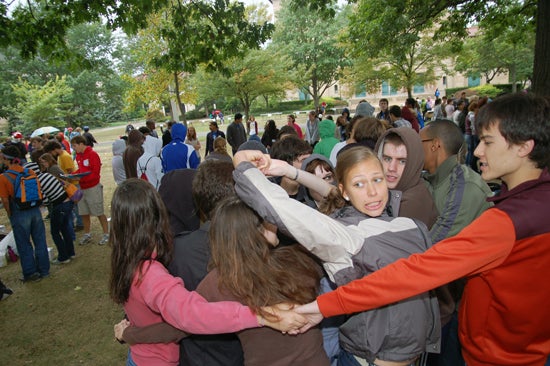 As soon as the groups started departing, I biked home and got a raincoat, put on boots, and put my camera equipment into a smaller waterproof bag and then met up in with the first group at Oberlin High School, where students were weeding and sprucing up the courtyard garden. 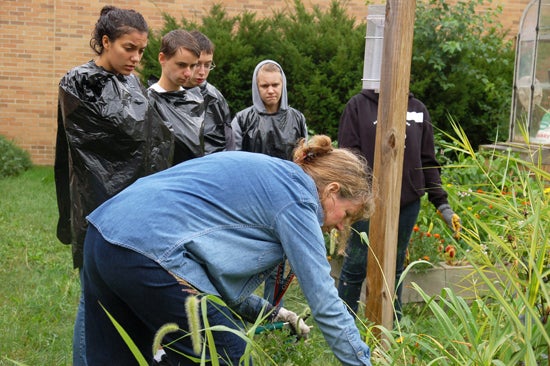 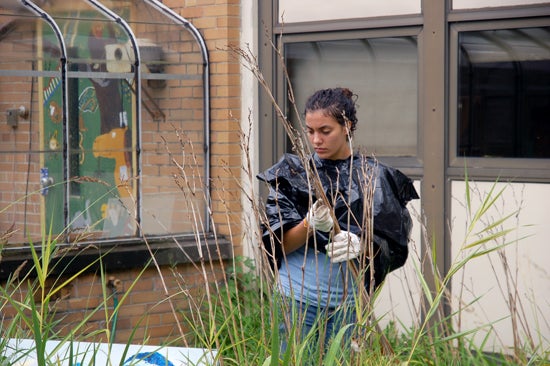 I then biked to Kendal at Oberlin, a fabulous retirement community that I want to live in one day when I'm old and want to be around this town in the future. The groups there were cleaning patio furniture and play items at the daycare center. 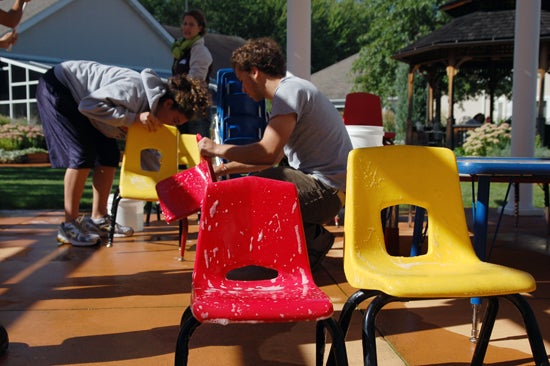 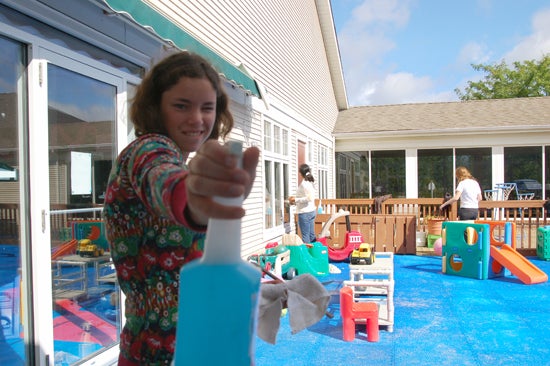 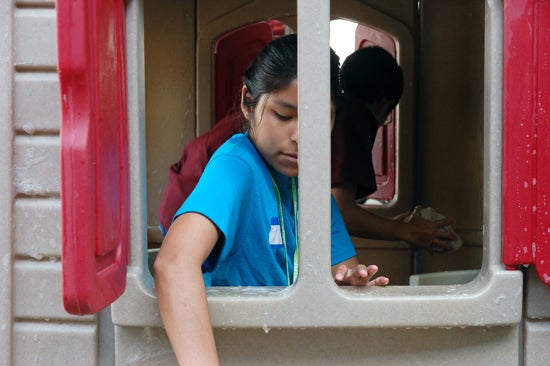 After that, I biked down to a few houses past mine, where I learned that there was a group of students cleaning up the second-most invasive species in Ohio, glossy buckthorn, from a spot right behind the new sustainable dorm, Robert L. Kahn Hall. 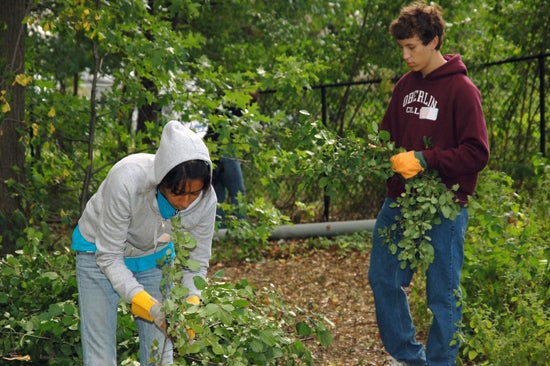 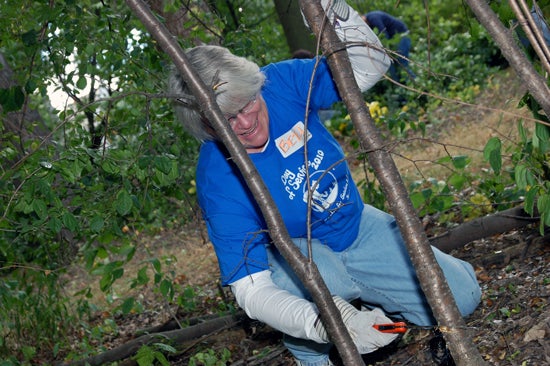 I popped by Langston Middle School, where kids were cleaning up the campus and mulching outdoor beds. I stayed to lunch with the group, and the district superintendent dropped by to thank us for our hard work. 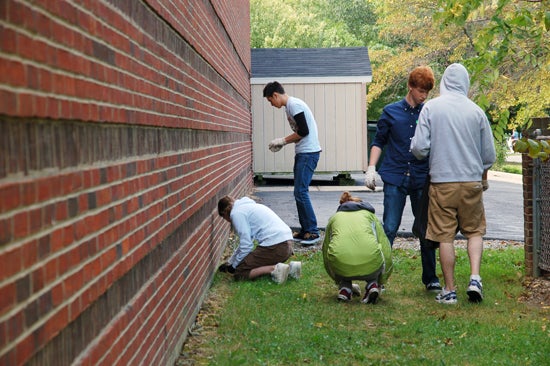 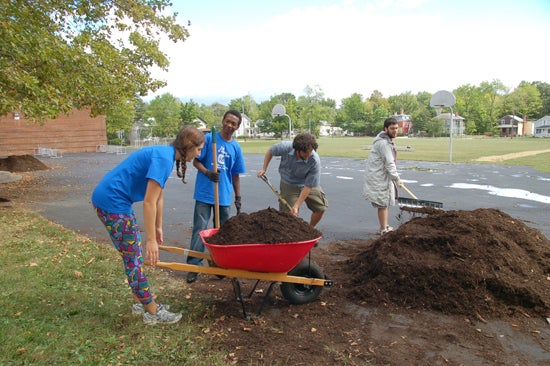 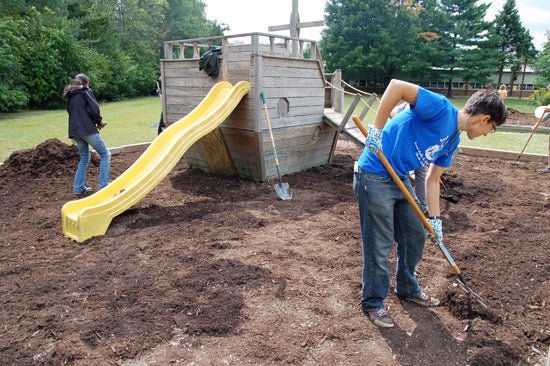 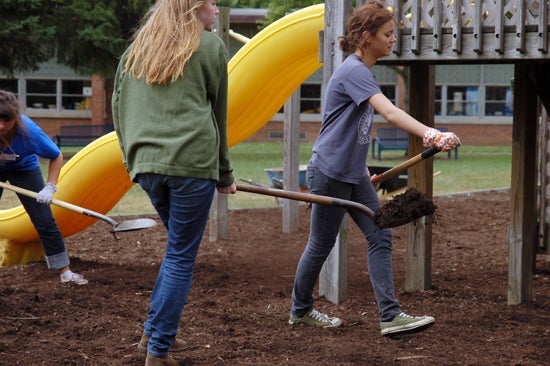 After Eastwood, I biked to the Oberlin Early Childhood Center, which I have tried to photograph at every year, but I've never been able to find anyone to let me into the building. Oh well. I had a similar experience at Peters Hall, where the Ninde Scholars were working, but again, the building was locked. Instead, I headed to the final stages of work at the Big Parade storage facility. There were saws! 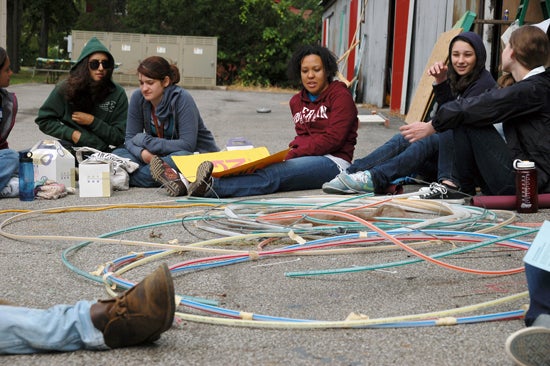 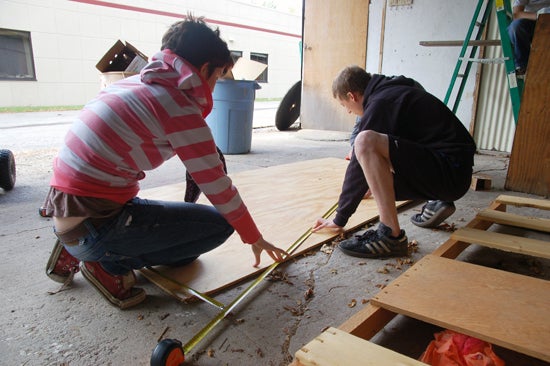 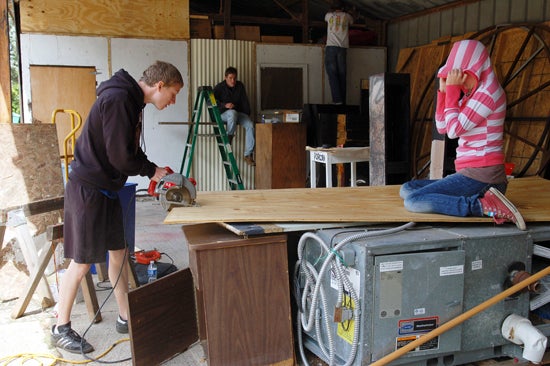 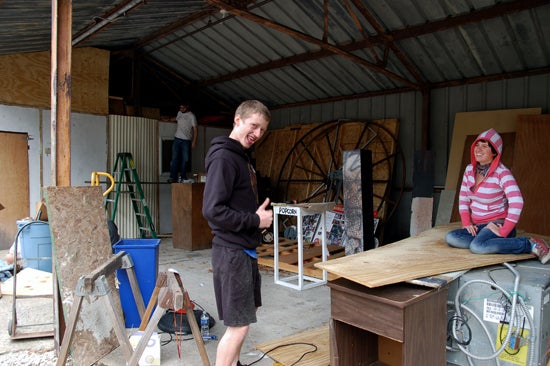 Want to see all the photos from Saturday? Check out the Day of Service 2010 album on my Flickr.