Welcome to the most secret-dense Oberlin Blogs blog post you have ever read. EVER. In this blog post, you will find secrets beyond secrets. Secret-secrets that are secret even to the secrets themselves. Most of them are solid, real things that you can go and see, feel, even taste. Some are more ethereal, ceremonial secrets to age old rituals that will allow you to get a class completely erased from your transcript, even after add/drop (woooooooooo~).

Outside of the building I lived in this year, Asia House, leading from the Southwest exit to the door of Fairchild Chapel, is a corridor. Many of the pillars are topped with faces, mostly gargoyle-like or monkish faces carved from old stone.

Some of the pillars hold other faces. Newer faces, some of them very new indeed. Some of them have glasses, some have weak chins. Whose faces are these? We may never know. 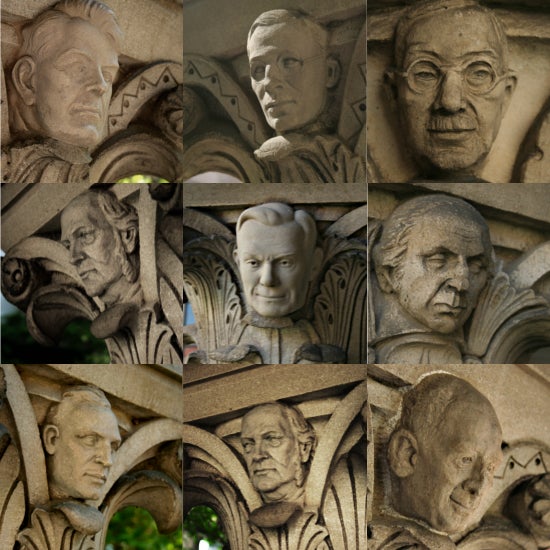 But we do know. I know. These are the faces of former Oberlin Theology professors (Secret courtesy Carolyn C.). Why they put their faces on pillars, we may never know...

Another Oberlin secret has to do with the trees in Tappan Square. Apparently they used to tell people this on the tours, so this isn't a secret to a lot of people, but I thought it was interesting anyway. There are a ton of trees on Tappan Square, and no buildings, thanks to one Charles Martin Hall. In fact, Tappan Square contains trees from all 50 states in the US, and gives the Square Beyond Compare a wonderful sense of biodiversity (Secret courtesy Liz S.).

Quick, name Oberlin's school colors. If you said crimson and gold, you owe me $5. Your invoice will be arriving shortly. If you said cardinal red and mikado yellow, you are a worthy adversary, but I owe you nothing. In a similar vein, 'Learning and Labor' came from the agricultural labor students were formerly required to do to help pay for their educations.

This one goes out to all you nappers out there. In the third floor of the science center, there are some real nice benches. These guys are firm and supportive, and just wide enough to stretch out on and do some serious nappin'.

Super Secret #1 (It's Super because... I said so). This secret may be bunk by now, because some facilities folks have been working on the lights in North Quad this week, but there's this light pole in North Quad. I know what you're thinking, and no, the secret is not that this light pole lights up every night after it gets dark (although that is kind of magical). If you tap this pole with a light tap and an open palm (alternately, charge at it at full tilt, leading with the hardest part of your skull) the light will go out, and you can feel like a wizard. Wait fifteen seconds, and do it again (Secret courtesy Liz S., idea for head-butting courtesy Jake H.)! 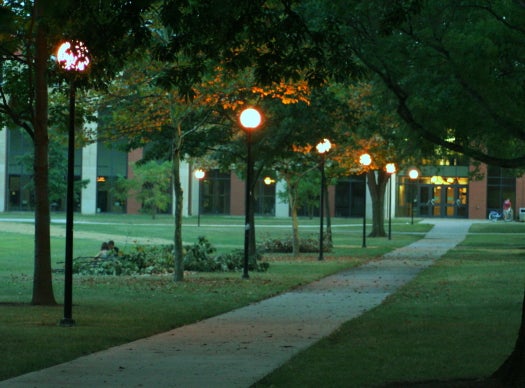 Many come and go through Oberlin's pastoral playplace, the Arb, and many have seen the signs denoting the area known as the "Ladies Grove," although few are willing to chance a guess at what the Ladies Grove is or how it got there. As it turns out, the entire Arb was built around the historic Ladies Grove, which was a place where women could 'suitably' walk alone. The College rules of 1859 read: "Young ladies who do not reside with their parents are not allowed to walk in the fields or woods excepting the grove assigned for this purpose." A lot of rules, what's all this I hear about the 19th century being simpler times? (Secret courtesy Liz S.)

Everyone's already gonna know this one, but Peters tower, closed off to the general public, is (of course) filled with dead pigeons. Hardly counts as a secret, since everyone and their mom has seen it, but nonetheless, worth a mention (Secret courtesy mystery girl in BIOL 300 my first year here).

You don't need to take econ or psychology intro prerequisites to actually get into upper-level classes. Helpful hint there, doesn't affect me much since I only deal with real science classes (oooohhhhh) (Secret courtesy Jacob L.).

Super Secret #2: Wilder used to be an all-male dorm. With people living in it. It was commonly referred to as the "Men's Building." Now it's the student union, but the super part about this secret is that you can still live there if you don't mind sleeping in the secret stairway that leads from the first floor to OSCA headquarters. Ohhh Bonus Secret!

You can't buy beer with Obie Dollars! An unfortunate truth for my friend Justin, a senior who has 400 Obie Dollars left in his account after not spending one his whole Oberlin career. Justin enjoys beer, you see, and could buy a decent amount of it with his socked away Obie Dollar savings. You can use your Obie dollars at any dining establishment on campus, the bookstore, and lots of places downtown. Never to buy alcohol with, though. A remnant of Oberlin's tee-totaling past? Perhaps, as Oberlin was once a dry campus and was the birthplace of the Prohibition movement in the early 20th century (Secret courtesy Jacob L.). 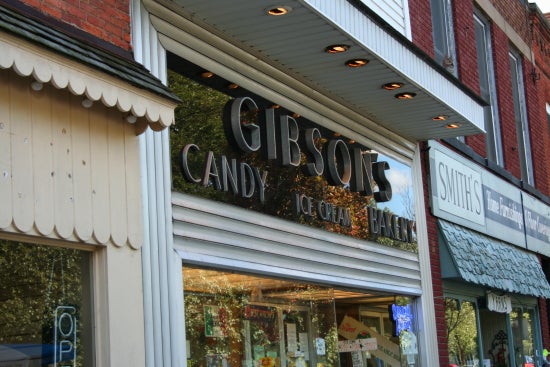 In back of IGA, there is a rather sizable vat of oil. The SVOIBIGA (Sizable Vat of Oil In Back of IGA) is the subject of many a scary story told around the cross country campfire every year, and continues to have quite the air of mystery about it, despite its simply being a rather large vat of oil, unremarkable in most ways (Secret courtesy Liz S.).

And the greatest secret of all, is Love (Secret courtesy of me). 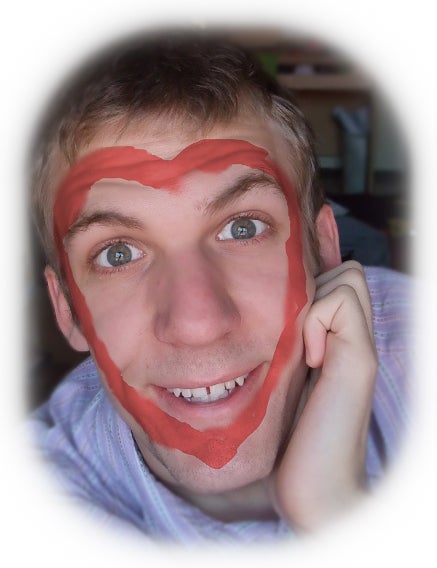 Your final photo made me fall out of my chair in laughter. You're so dapper!

If you ask very nicely, the person who holds the key to the Peters tower may let you in to see the dead pigeons. When I visited, all I found was super old graffiti. The pigeons must have escaped when they heard I was coming. It's the COOLEST TOWER though. Best tower in Oberlin, by far.

Also, I think that the Hall you are speaking of in regards to Tappan Square is Charles Martin.

Yes, Charles Martin Hall. Fixed! Also, some credit needs to be given for a few of these secrets. Also fixed!

This might be my fave of your blog entries. just sayin

you are officially, and effortlessly, funny. :)