Okay, I’ll say it: my first two winter terms were not like what you might find on the back of an Oberlin brochure. I didn’t fly to Thailand to rescue elephants, or cure hiccups, or write impressive-yet-succinct briefs for Congresswoman Alexandria Ocasio-Cortez. Both freshman and sophomore year, I chose to stay snug at home in San Francisco, CA; while both times, going home was what I needed, by the time junior year came around I knew it was time to branch out. As my borderline-hippie mom told me: “Fly, baby bird, fly.”

For me, that meant flying all the way to the East Coast to intern for the Lower East Side Harm Reduction Center: a community-run syringe exchange and social services clinic serving residents of the Lower East Side. Me! An ~intern~! In the Big Apple! Not only the Big Apple, but, for me, the Biggest Apple. I was super excited to learn from an incredible, radical organization, but was apprehensive about the distance. I’d been nervous to go to New York for a long time — my city, San Francisco, is small and friendly and easily navigated by bus and train. Everything I’d heard about NYC claimed the opposite. I expected harsh snow, lousy buses, and celebrity showdowns on the sidewalk. As January steamrolled closer, I had stress dreams of being eaten by Pizza Rat in one big bite.

When I first arrived, just as I foresaw, I panicked. My flight had been delayed by many hours, and I was cramped and exhausted. I arrived during what the New York Times deemed “LaGuardia’s worst week ever”: thousands of flights had been cancelled, multiple baggage claim terminals had been flooded, and stranded passengers slept woefully on the ground with their soggy suitcases. As I tried to call a ride share to get to the bus station, I kept missing the cars as they came because I wasn’t standing in the right pick-up zone. I ended up paying way too much money for a cab; as I rode through the dark and noisy night, small, wobbly tears traced down my cheeks. I felt SO sorry for myself, and felt myself regressing towards a much younger version of Hanne — shy and insecure, worried about everything.

But I made it through that first dramatic night. Thanks to the extreme generosity of an Obie — Fi Sherman, a fellow staffer at HIV Peer Testing, an organization I volunteer for on campus — I found myself housed, fed, and gently affirmed. In my first days, I had a LOT to get used to. But staying with an Obie I knew and trusted made it all so much easier. When I got overwhelmed, Fi was quick to soothe me, cheering me up with challah and bad TV. They walked me around their neighborhood with pride, and pumped me up for our early morning power-jogs to the train. I stress-journaled a lot in my first week, but soon found myself wrapped up in the packaging of a new, and dare I say glamorous, city.

There’s a poem (well, technically a facebook status, but what ISN’T a poem if we’re being honest!) from the artist Shira Erlichman that I really love. It’s an ode to the “homies…[who] suddened / my own being / into a place / I could call home.” I’m sharing it here because it feels so darn apt; to me, January in NYC felt like a whole year in a strange pink room, but also the constellation, also the curious caterpillar.

“This is probably an essay about one of the hardest years in my life where I lived far from the people I loved most in a strange pink room that used to belong to a child so I'd find plastic French fries under the radiator or marbles in the closet but instead it's just a post to tell you that one day it was summer & I was in my lonely inherited room & I heard a bizarre sound I couldn't pin down or locate sort of like "mcrunch-mcrunch" & I hunted that sound like a meditative Carmen Sandiego & when I found it it was a substantial-sized lime green caterpillar going to town on a leaf on a plant a neighbor gave me & I burst out laughing in wonder that such a small sneaky inhabitant was literally getting their life, causing so much mystery & sudden joy & so I think what I'm saying is we all exist in a big pink cosmic room, sometimes as Carmen, sometimes as Caterpillar & wouldn't it be something tho to not focus so much on that, but rather, on the neighbor who gave me that plant, without fanfare, not knowing I was drowning, & so gifted me a constellation of homies, & too, on an afternoon just like this one, suddened my own being into a place I could call home.”

That really feels like my NYC winter term. I was suddened into a home thanks to Fiona’s kindness, but also all the magnificently supportive staff at my workplace. Everyone who works at LESHRC has been in the harm reduction field for a long time, and there was so much incredible intergenerational knowledge to learn from! Dana Kurzer-Yashin, an awesome former Oberlin HIV Peer Tester (and Comparative American studies alum) showed me the ropes; she trained me quickly, and then trusted me enough to set me out on my own. Before I knew it, I was helping test folks for HIV, working the welcome desk, and getting trained to administer Narcan -- an incredible overdose reversal drug. It felt so powerful to learn new, life-saving skills, and know that the work I was doing was helping people assert agency in their lives.

I was even able to help teach in the Center’s adult sexual health education program, which felt like a huge privilege. The lesson I helped facilitate totally re-contextualized the way I see my work back at school in HIV Peer Testing. In the class, we talked about all the myth and fear-mongering around HIV; we dispelled some common misconceptions about the virus, like about the fact that “spit can’t transmit [HIV]” and that holding hands won’t transmit the virus either.

(If you’re wondering what five fluids DO transmit HIV— blood, semen, vaginal fluid, anal fluid, and breast milk can all transmit the virus.) One of the participants started crying when she learned that spit can’t transmit — she shared that she had kept her children’s silverware separate from her own for thirty years because she was worried that a remnant of her saliva could pass the virus to them. She said that this information was not only going to change her quality of life, but would change many of her friends’ lives too. Many people who live on the street share critical, life-saving health information with each other; information travels in waves, and folks educate each other based on word of mouth. But when that information is inaccurate (like in the case of thinking spit transmits HIV), people can unknowingly hurt each other. Part of the power of programs like LESHRC is that they help get timely and accurate health information circulating in the communities they serve. Knowing that I played a small role in that exchange felt really powerful. My work with LESHRC helped me connect the things I study at Oberlin to the work real people are doing in the world outside college - my few hours a week volunteering for a student organization actually make a difference far beyond Lorain County, Ohio. 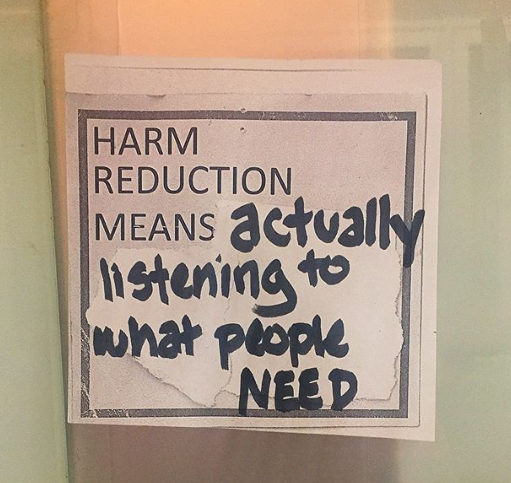 I’m thinking a lot about self-compassion lately. It’s okay to be afraid. It’s okay to cope with your fear in the ways that work for you. But what I really got out of spending winter term in NYC was this goal: to do something that scares me every day. It took me a while to work up to leaving home for winter term, but I’m so so glad I did. As I approach my final semester at Oberlin, I’m thinking tenderly of my tenacity, stubborn need to make things work, and ability to invent fun in stressful situations. When I think about if I’ll return home after graduation, I can feel those same butterflies of fear flapping in my stomach — it’s hard to leave what you know. But I took it one step at a time in New York, and I know I can do it again no matter where I am.

No matter where I end up, I know I’ll be bringing along a constellation of my loved ones. I can see them now: feeding me bread, helping me learn, gently cheering me on.

Hi Hanne I love you and also this blog post I feel so affirmed in my decision to stay home for WT for two years and also in my plans to go somewhere different next time!!! Welcome to the blogggsssss :)

Navigating Winter Term as a First-Year

How I learned more about Winter Term and settled on my first project.

I can be thankful for where my drive has taken me while also realizing I deserve to be in the spaces I'm in.

Many students at Oberlin have some kind of job either for spending money or to help out with cost of attendance.