Anticipation was definitely high for last night's talk from OC alumnus/world famous actor Ed Helms. I personally got to Finney 20 minutes before the scheduled start time, as opposed to my usual 3 minutes before (or sometimes after). The Chapel filled up so that people were sitting in the aisles around 7:55, and the excitement simply could not be contained. I wondered how Mr. Helms would fill an hour or more. When Stephen Sondheim visited Oberlin last year, he brought an interviewer with him, and they had a kind of conversation on stage. Amory Lovins, whose optimism and sense of humor I really enjoyed, had a 90-minute Powerpoint presentation prepared. What could Ed Helms, known mainly for playing goofy and annoying dumbasses, have planned?

I unknowingly got a hint when I went to the bathroom underneath the stage before the show started. I finished, um, let's see, put this delicately, um-- peeing, and I hung out for a little longer than I should have washing my hands and drying them on my pants. I know for a fact that celebrities have to go to the bathroom just like us. I also know that before you go onstage, it's a good idea to use the facilities one last time, because there's no going back once you're out there. Ed Helms did not show up, but I made a great impression on a guy who walked into the bathroom. I swear his hair looked exactly like one Mr. Helms', and I was so keyed up I yelled "ED!!" as soon as the door opened. I won't go in to what happened next, just suffice it to say you don't want to startle someone who really has to go to the bathroom. I toweled off, and while walking back to my seat, I heard someone(s) backstage warming up what sounded like a bluegrass band. I thought little of this. Convocation speakers usually have opening acts, perhaps the Black River Belles or some other group were going to be it for big Eddie.

Back in the balcony, curtain time was at hand. Someone in the back of the balcony started the slow clap, and to wild, preemptive applause, an older woman walked out of the door by the side of the stage and looked confused. No Ed Helms. The wave (the freakin' wave!) started waving through the balcony, TWICE! The spirit tsunami even splashed over onto the main floor. I would love to know if this has ever happened in Finney before. It felt really groundbreaking at the time. But where was Ed?

He finally entered, to an uproar I could not have imagined. Paraplegics were out of their seats, I literally clapped my balls off. "Starvin'" Marvin Krislov started to introduce Ed when a surly-looking Safety & Security officer walked onstage, swinging a billy club and toting an ominous-looking folder (trust me, with this guy holding it, the folder looked plenty ominous). Marvin's normally smiling face went stony.

Our president proceeded to read a list of offenses, library fines, OSCA bills, and delinquent payments in Ed's name. He decreed, Hammurabi style, that his punishment would be a teaching position at Oberlin College that he would be stuck in FOREVER! What does this say about our tenured professors? Seriously. 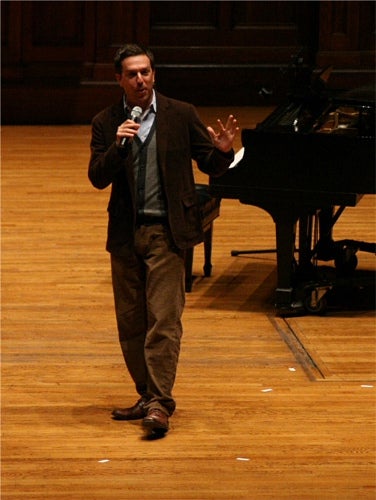 Ed near the beginning of the show. Notice the jacket.

Ed declined, saying he would rather pay exorbitant amounts of money than face that cruel punishment, and started the show. He shouted out the freshmen, sophomores, juniors, seniors, and Republicans. He touched on the strange nature of Obies, our lame mascot ('A guy with wheat strapped to his ankle'), less-than-awesome dorm life, and tasteless dining hall food, basically casting serious doubt on our decisions to come here. He did show a real love for the chicken patties at Dascomb, however.

Ed flew into a story about his childhood ambition to be a baton twirler, ending with the day his dad told him he was very talented, and should never do it again. His point: do it anyway. Then he mentioned the grand piano that had been sitting rather suggestively with its top open since we entered Finney. He sat down to play a little ditty, the same song he sang in The Hangover when he and his two friends were looking for their missing friend Doug. It ended thus: 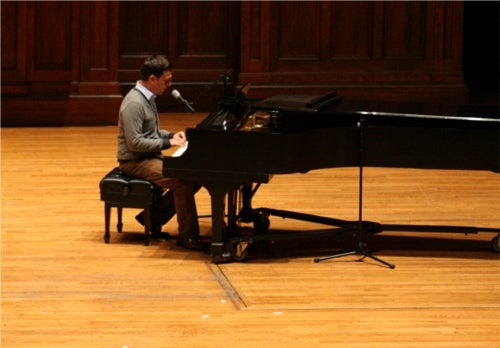 Ed at the piano. Conspicuous jacket is gone. Ed even began to curse the fact that he wore a
sweater as body heat steadily warmed Finney up.

After thunderous applause, he followed this song with 'Candle in the Wind,' in a real over-the-top Elton John voice, and a musical journey led by Yanni that involved a white Camaro speeding along a beach cliff and winged pegasi galloping through the air. Magical. 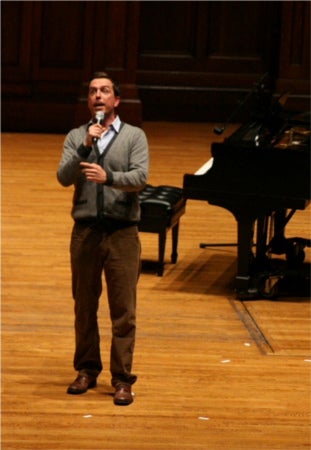 Edward, soaring on wings of Yanni.

At this point, The explanation for the music I had heard earlier came out on stage. A member of Helms' original bluegrass band the Weedkillers, a recent Oberlin grad, and a current Con student (I have no memory for names) came out, and with Ed on banjo, played half a dozen bluegrass tunes for us. 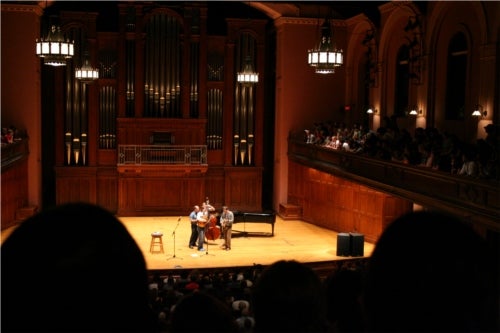 This may have been the slowest part of the evening for me, just because I can only take so much folksy bluegrass music even when I'm not sweating and wedged shoulder to shoulder in church pews.

One of the most anxiously awaited parts of the evening, the Q&A time, included a wide array of queries into Ed's banjo career, his job at The Office, the time he rappelled off of the tower in Peters Hall, and the exact location of his dorm room in South. Someone asked about his favorite co-op memory (watching thunderstorms from the porch swing in Tank and starting its beer bottle collection), another about his time on the swim team ('well, I was really buff'). 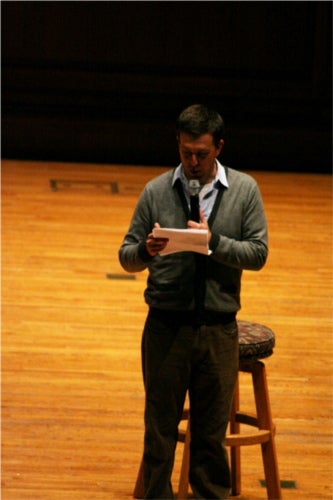 Ed reading his own application to Oberlin in response to the question, "Why Oberlin?"

Towards the end, my friend Mike had an inspiration and decided to ask a question. He was in the balcony, so he ran to get down to the microphones in front of the stage. Not long after he got in line, Krislov steps in and tries to wrap things up, saying we only had time for two more questions. Mike was third in line. How were we ever going to know if Zach Galafianakis, 'Alan' from The Hangover, was really as crazy and weird as he is in his standup routines and in movies? MAAAAAAAARRRRRVVVVV! Ed answered a question about his Winter Term projects and a lame question about what party he was going to that night, and then turned to the president.

"There's only a couple left, can we take a few more?" Oh Edward, you saint. Marvin told them to be quick with the questions, and to make sure that they were in fact questions. The first girl asked hers, wondering whether Ed would sign the picture of him in a speedo hanging in Carr pool, and it was Mike's turn. Ed did mention that he and Zach lived together for a few years when they moved to Los Angeles, but no real great stories about kooky pranks he had pulled or anything. As Krislov the Destroyer moved again to close out the Q&A, Ed stopped him and asked to answer a couple more questions.

"When you're an alumnus, you can defy the president!" he told the audience, to their delight.

Unknown Con student was Erin Lobb '11, a member of aforementioned Black River Belles. She is, in fact, AMAZING!

I thought it was a great convocation, I never knew Oberlin students could be so cohesive and coordinated, and you covered the whole evening exceptionally well. :)

She certainly sounded amazing. Now I'm sure I saw you front and center with your camera, when/ where can we expect to see the pictures? Next issue of the Review?

Next issue of the Grape?

Front and left side for most of it, but I moved when the music started... Pretty cool location :D

They will be in the Review this week, too.

Will - You guys need photos? I'll drop by tomorrow night...

Even though the dressing rooms in Finney are terrible, I will attest that one of them (the eastern one) does in fact have a bathroom in it, spoiling your plan. You'd be better off wearing all black and seeing if the stage hands will believe that you're a new hire and stalking the backstage area.

Also: Best title ever. Nerd cred is yours.

I usually skim through "Around the Square," but this article was very funny and well written--definitely relatable, even though I graduated 15 years ago.

I knew it Lillie! Otherwise, my plan was pretty foolproof. Maybe I could have wandered into the dressing room and hung out in that bathroom. If I acted confused enough I could probably pull it off.
Aries, the credit for the title goes, at least in part, to my friend Mike. I thought of it, then changed it to 'Captain Ed at the Helms,' when he convinced me to keep the LOTR reference.