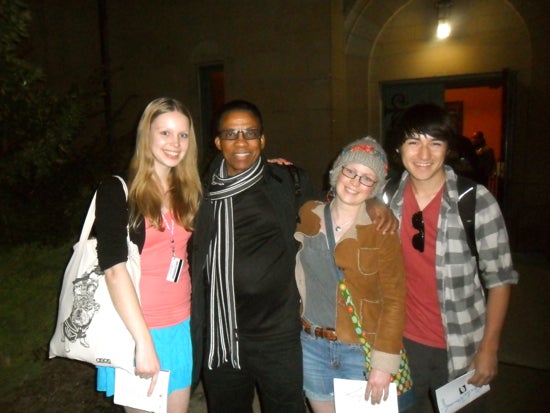 And he's wearing his classic scarf!! So elegantly draped. So snazzily striped. Definition of chic, right there.

Oh my god oh my god, best day of my life (after huskies and birthdays etc). He is such a cool dude and a really sweet person. This is one of those 'only in Oberlin' moments.

So I'll start at the end: after Herbie's guest recital concert with his band last night, about ten of us die-hards waited until midnight at the back door of the concert hall while Herbie partied away inside. We were getting cold, and bored of watching this happen a lot: 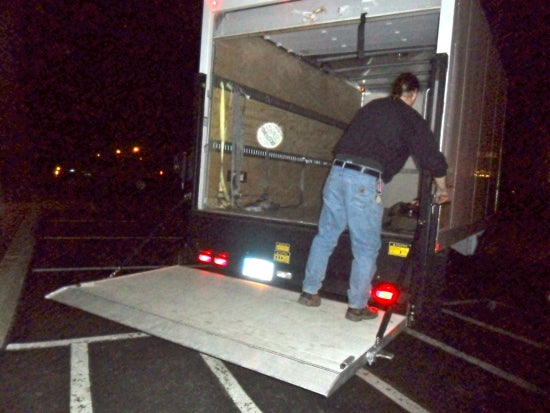 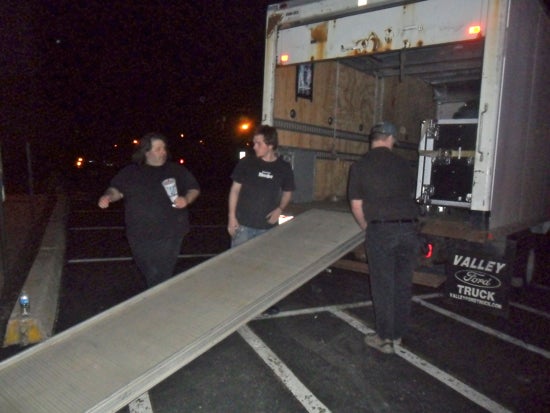 Someone did not pack light.

His assistant shuttled back and forth carrying crates of water (Fiji water! Herbie drinks Fiji water! Well, I guess when you have money to burn, you resort to buying expensive water...). Assistant quote: 'He can't get enough water.' So we're all now dedicatedly drinking Fiji water in the hope that some Herbie effect rubs off on us.

And finally, Herbie walked out of the door!!! He was so friendly and hung out with us for ages, no rush to get to his tour bus (which looked really enticing), and just chatted about his music and signed things. Such a jazzer, so laid back! Yep, just chilling with the students.

And rewind: me, Leah and Ida had OK assigned seats but snooped around for better ones and ended up sitting in the best seats in the house, front centre! Someone silly didn't turn up, I guess. Because if you were in Oberlin and you missed this concert, you are off your head. Herbie and his three band-mates came out and just ripped it up. It was exhausting just to listen to this immense wave of amazing music hit you in the face! I loved it so much.

The guitarist did the most incredible solo ever, with all these funky percussion techniques and singing into a microphone that miraculously turned his voice into a fully harmonised chord! Took my breath away.

That one's really jolty cos I was dancing in my seat, sorry!

Herbie told us he got into Oberlin, but they didn't give him a big enough scholarship! Ooops. Someone's kicking themselves right now.

He also did a brill piano solo, which he made up on the spot:

Bit of Maiden Voyage in there, I think.

When the concert was over everyone was whooping for more, so they did two encores: Watermelon Man and CHAMELEON!!!! My god my god my god. No words!! We all started dancing, and this cutiepie gentleman of quite some years was dancing like it was the 70s and led us all in a massive conga line around the whole hall, past the stage, literally inches from Herbie's beaming face - he clearly enjoyed his effect on us, cos he kept the music going for aaaages! We were all just so happy. There's nothing like Chameleon played by the guy who wrote it and three other total powerhouse musicians. At the end, everyone went berserk and just as Herbie was about to walk off stage, I ran up to the front and handed him a CD with music that I've written on! He leant down and took it and kind of went 'aww' under his breath, waved goodbye to everyone and walked off!! That made my day. I've written quite a lot of piano stuff, so I really wanted him to hear it, because he's been such an inspiration. Yay!!

Apparently, Herbie's 71! Very hard to believe - he looks maximum 45. Naturally ageless, I think. It's something to do with the jawline.

There was one small downside to this whole night: from the start of the concert, I had needed the loo quite badly. But the queue was way too long to make it back in time for the start. So I held it in. And then, we had to wait outside for Herbie until midnight, and I was still holding it in. Because I didn't want to miss him! Eeek. Things could have gone really bad if I'd suddenly gotten too relaxed when I met him...(well, I guess I would have been memorable!!) so if I look a little strained in the photo, then you know why. Luckily, I held it together. Mostly. Only kidding! Maybe.

I am SO happy Herbie came to play at Oberlin! It was an unforgettable concert and I just feel so privileged to have been there. This whole semester is worth it just for that concert.

I'll end with a Herbie quote: 'Who in here is a student?' (All of us wave our hands around) 'Well, I'm a student too. There is always something to learn.' Yes!!

At the time of writing, I've yet to have my post-concert shower - so if anyone wants a hug right now, I've got second-hand Herbie on offer. Just saying.