And if Cheerios means mornings, well... 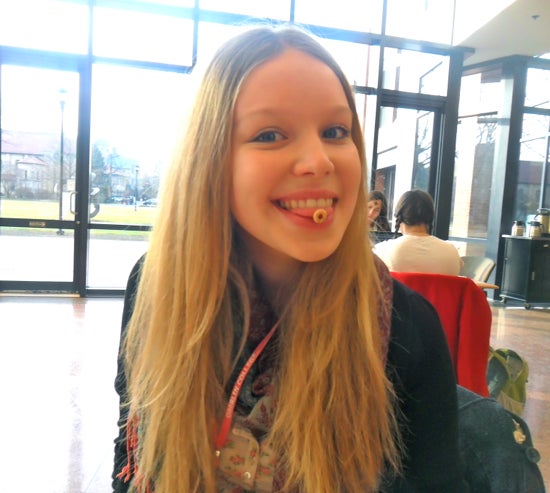 I can be persuaded.

This semester has introduced me to a new and exciting phenomenon: 9am. This is not an introduction I willingly chose, or ever would - it's become a sort of forced conciliation. How to make 9am good? Eat! 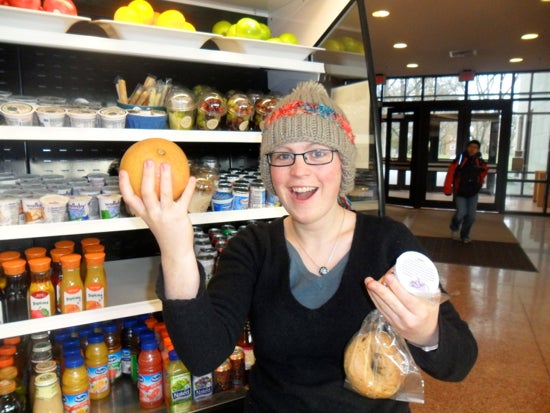 Leah discovers a grapefruit! Fingers crossed they count it as a 'snack' in our meal plan and not an 'entrée' - but we're so getting it anyway!

Welcome to the science cart! (Little cafe in science building.) Doesn't it make you feel clever just saying it? The food here does indeed contain a magic ingredient that turns you into a scientific genius, but only for as long as you're actively chewing, so you probably won't notice it, because you'll be preoccupied by the yummy tofu and/or over-salty olives in your wrap (they do lunch too). But it's there all right. I have to get up at 8.30 to do this wonderful breakfast thing, but to be honest, it's the only thing that would get me up at all. 30 minutes more of sleep deprivation well spent, I think. 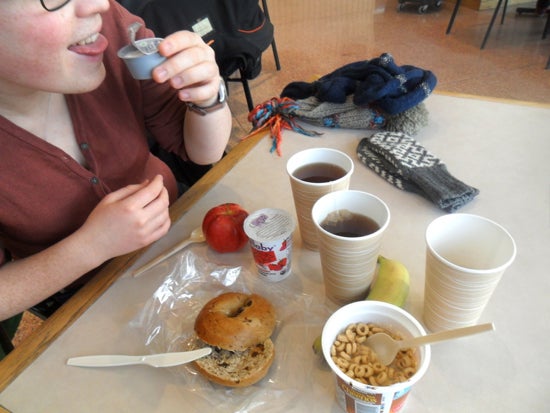 And at 10am, this is the effect of drinking a litre of tea an hour earlier: 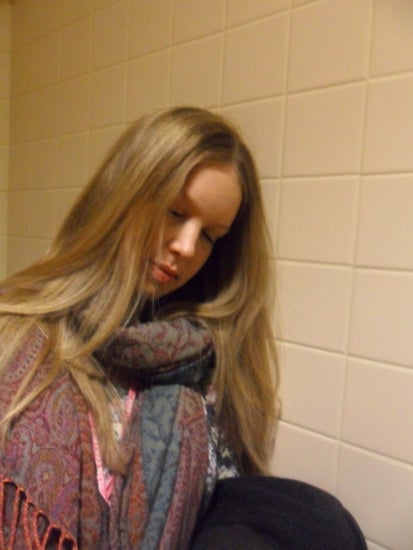 Asleep in the toilet queue before maths. Taken by a fellow tea addict. We pay the price.

So why this 9am caboodle? I decided to take physics, i.e. really hard physics, which only meets at 9am (they have to make it literally as hard as possible). It's a baptism of fire. I did physics at A Level in Britain but that was beyond easy compared to this. Plus, I took a gap year, so the cogs are rusty/fell off somewhere in the Bolivian jungle. But we do play with balloons in class and watch the teacher almost get electrocuted, so it's all worth it.

Now that I am a real life struggling physics student, I like to say:
1/State(my bookcase) = State(my brain)

State(bookcase) has a range 0 to infinity, 0 being there's nothing clean about it (which is possible), infinity being perfectly clean (empirically impossible, we can all agree). So, as State(bookcase) tends to zero, State(brain) tends to infinity, causing system overload and eventual shutdown. 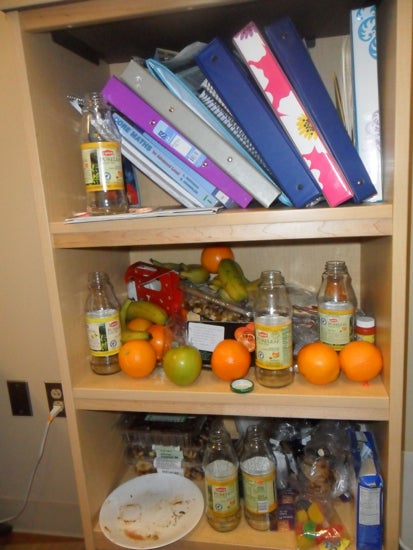 I'll let you 'do the math'! I think I get some credit for clearing away the empty yoghurt pots before taking the photo. But there's something about iced tea bottles that just doesn't want to be thrown away. Oh my god, something's growing on that plate! I hadn't noticed that. I should be embarrassed... Also, most or all of this fruit may or may not have been borrowed from a certain dining hall. Officially, I ate it whilst there, only I ate it in the future. Fruit travels faster than the speed of light - fact.

To ease my struggling, I've got a tutor! We haven't met yet, so all I know about him is he's called Zach and he loves physics. And he's free! Oberlin pays older students to tutor newbies, in any class you're taking. Perfect! Also, office hours are saving me. Although I always feel a bit awkward walking in and coming out 2 seconds later, having missed something totally obvious in the question. Oh well! It's still very satisfying.

God, Oberlin is intense. So. much. brain. usage. I kept some newspapers from sleepy little Banff (winter term - see previous blogs), and sometimes I read them to get perspective. Because in Banff, this is front page news: 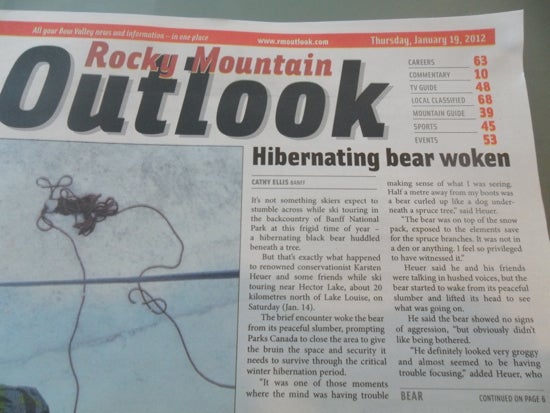 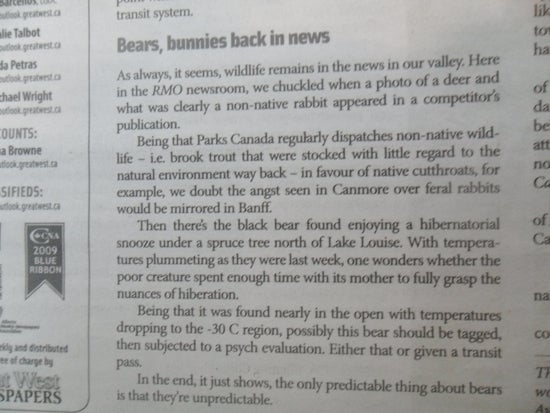 And when you need to let your hair down: 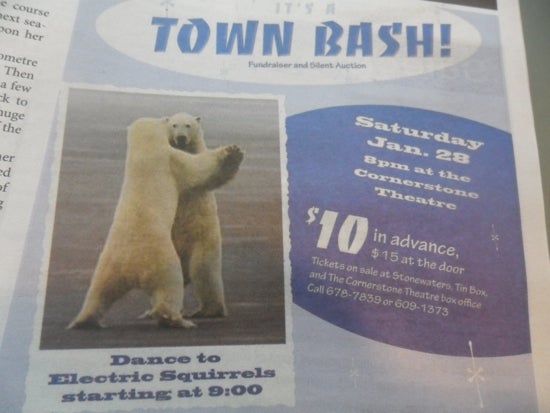 I am SO SAD THAT I MISSED THIS PARTY!!! 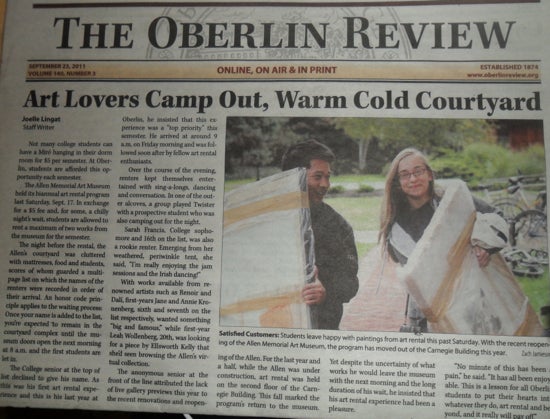 What do these even mean? How can the courtyard be warm and cold at the same time? Are we warm? Is the courtyard warm? Who knows. Oberlin Review, stop using, so, many, commas!! They actually are, very silly. Also, you need a copy editor. 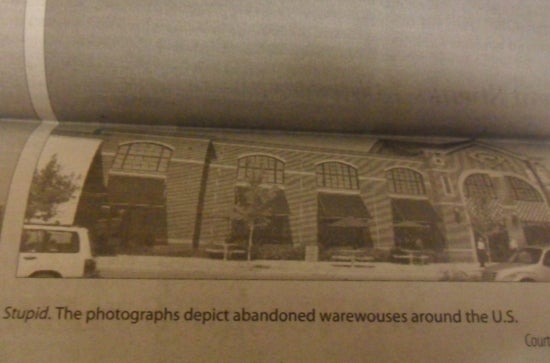 I think they mean 'abandoned werewolves.'

Apart from physics, I'm taking maths (multivariable calculus with the wonderful Professor Henle, who feeds us hyperbolic Pringles), and music music music. Composition, music technology (it is required), and music theory (also, sadly, required). I love my composition class. We're writing fake Bach inventions at the moment. I'm hoping to dip mine in some tea and flog it off. My teacher is brilliant (in composition, they all are) and we have as much creative freedom as we can justify. Which is a lot! There was a faculty composers' concert the other night, and every piece on there was SO good. I came out thinking - wait, those are my teachers?! They answer emails from me asking if I left my favourite pencil in their office?

To cancel out all that classical-y music thinking I'm doing, there's only one cure: mindless pop. I refuse to be ashamed! Good, bad, at 2am on a Wednesday I do not care, as long as it has no more than four chords and at least one tacky key change. Or if it's Arcade Fire :) A clarinetist who plays contemporary classical music once told me that he can't get through the day without regular Katy Perry breaks. I love guilty secrets! And on that note (haa!), it is in fact 3.03am - time for bed. Mustn't keep the Cheerios waiting. 500 impatient Cheerios, slowly drowning in soymilk, is not a pretty sight.

One of the reasons I was most grateful for living in Harkness: the one semester I had consistent 9am classes, we had such wonderful breakfast cooks. All I had to do was stumble downstairs and eat and make sure I was in West Lecture Hall promptly at 8:59am.

I wish our local papers had more news about bunnies.

Wow, that is serious dedication! My saving grace is sleeping in all morning on Tuesdays and Thursdays...aaaah... and I think there should be a 4 credit class on bunnies.

You did a gap year? So am I right now! Did you apply during your gap year or you senior year?
Yaayy for cheerios and soy milk, perfect combination :)