It's early August, and that means that housing assignments are out for the incoming first-years. Congratulations!! I'm sure you're excited to meet your roommates and start decorating your dorms. In the meantime, I thought I would share a few photographs from the (many) dorms I've lived in while a student at Oberlin. Please forgive any messiness in the pictures!

I lived in Barrows during my first semester at Oberlin and loved it. It's not totally clear in the photograph, but each double room has two twin XL beds (that can be lofted) and a wall of storage space. That wall includes two closets, two dressers, and two desks. There's plenty of space for clothes and everything else you might need. At the end of my bed was my roommate's desk, with her bed next to that and against the wall. Each floor has a kitchen and common room, and there's laundry on the first floor. 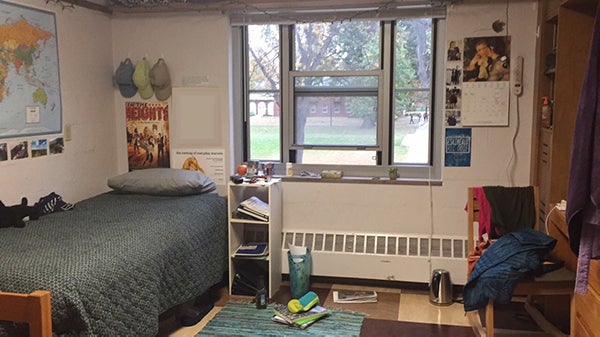 For more information, check out other wonderful blogs about Barrows, written by Teague and Karl.

I moved to Kahn for the second semester of my first year to live on a hall with a bunch of my friends after a space became available. I LOVED living in Kahn, and spent hours upon hours in the lounge with my group of friends laughing and eating mac and cheese. Like in Barrows, each double room has two twin XL beds (that can be lofted), as well as two closets, dressers, and desks - all of which are easily movable. Each floor has multiple kitchens and common rooms, and you can find laundry and practice rooms on the first floor. The basement has a small gym and dance studio!

I searched for photos of my room in Kahn, but they were all too messy and unhelpful to merit inclusion in this post. Instead, I'll encourage you to check out Emily's post, which has some great pictures of her room in Kahn, as well as Marsha's post with pictures and information from when Kahn was first built in 2010.

I lived in Fairkid for most of my sophomore year. It's a comfortable dorm on Elm Street, right by the AJLC and South Hall! As in other dorms, my double in Fairkid had two beds, two desks, and a wall of storage like in Barrows. The picture shows my boyfriend's and his roommate's desks (featuring art from Art Rental), with their beds on either side. The other side of the room is the wall of storage. There's laundry on the third floor and a kitchen on the second floor. Fairkid holds a vegan dining co-op, but most people who live there don't eat in the co-op. 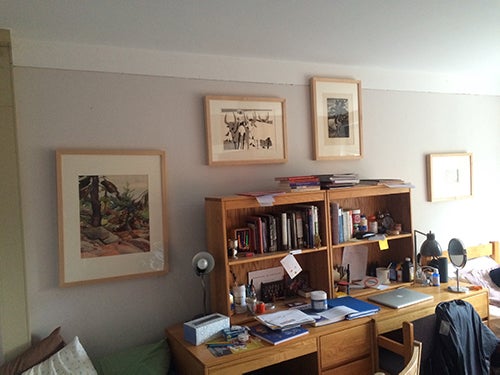 I lived in Noah for a module at the end of my sophomore year after getting off the waitlist for a single. My single was quite small, but holds a special place in my heart. Like Kahn, all the furniture in the room was easily movable. Noah has all the qualities of other dorms, with kitchens, lounges, and laundry. 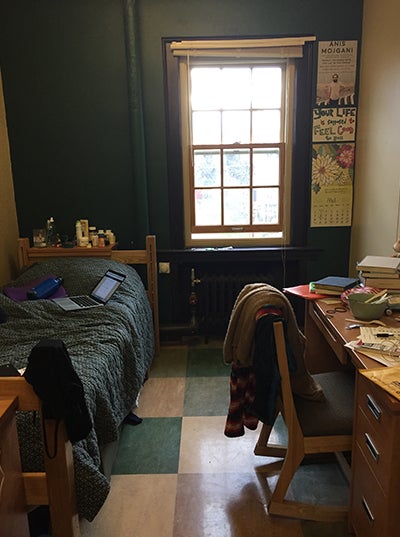 I lived in a single in J-House, officially known as Johnson House, during my junior year. J-House is about a fifteen-minute walk from the center of campus, so I biked most of the time. It's right next to the Arb, so I took lots of beautiful walks. It's a great community with a mix of religious and non-religious Jews, all of whom are interested in discussing Jewish culture and history... and eating lots of yummy Jewish food. A major perk of J-House is its HUGE rooms with great windows. Here's a picture of my room as I moved in. Not pictured are my wardrobe, closet, and comfy chair. 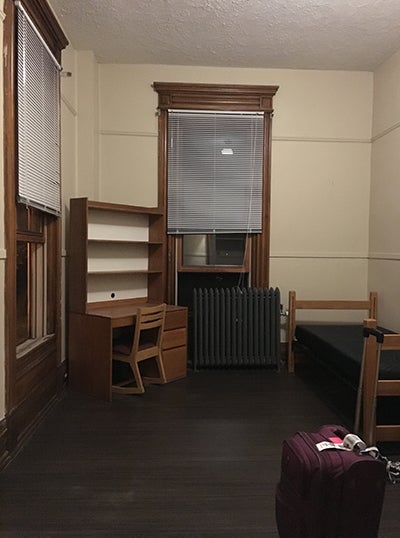 Thank you for journeying with me through my many living spaces in Oberlin. During my senior year, I'll be living in a beautiful off-campus house with three of my friends. For specific information about dorms on campus, visit ResEd's website, where you'll find floor plans and details about each building. There are tons of blogs about housing in the "Dorms" filter, which you can search for here. Can't wait to see you all at Oberlin!