This one goes out to the graduating Class of '16.

Commencement Monday was May 23rd (I know, I've taken my sweet time with this blog). That date marks the definitive end of my first year at Oberlin; the point where I had to finally accept that it was all over and done.

More importantly, it meant a goodbye to all the seniors I had come to know (mostly through OSwing and OCircus) - my mentors, role models, and friends.

My commencement experience began on the Monday right after Finals, a week before the actual ceremony. I woke up to the calming and *definitely* not annoyingly loud sound of the cleaning crew's vacuums coming through Barrows. My dorm room was empty and packed up of all soul as per regulation: beds lofted to their lowest level, all furniture moved 6 inches away from the walls, and the floor finally swept and clean for the first time all year. My roommate wasn't snoring away, my New Zealand flag wasn't on the wall, and it wasn't my home anymore. I had just said goodbye to some of my closest friends the night before. It was almost too much.

Luckily, I could run away from that feeling. I moved later that day into my Commencement housing assignment: Tank.

Boy, Tank was an upgrade. It's a freaking mansion that was converted into a coop. My room on the third floor actually had the cool slanty roof thing (but no I didn't get The Room)! Still, I already missed living in Barrows.

It also went from the full throttle craziness of Finals... to basically nothing, with no commitments. I had a Commencement job with S&S, but that didn't start until later in the week, and it was easy. I watched the giant tent, or the thousands of chairs they had set up, to make sure they weren't messed with or stolen. Looked a little like this:

I found myself training in Hales quite a bit over the week, other than hanging out with some seniors. OCircus! had the space all day every day to prepare and practice for our Commencement Show, which was a big reason I stayed for Commencement.

But there was more than that. While I've grown quite involved and attached to the OCircus! community (as evidenced by my massive over-involvement plans for next year), I'm also really invested in OSwing - the Swing and Blues Dancing community.

It's strange, there's this really indescribable way that you get to know people through dancing - especially when you've been dancing with them every week for a year. Particularly in Blues, there's a rich, mutual, platonic intimacy that you can develop with people, and a unique language that's different with every dancing partner. It was tough to know that after those last dances, I might not be able to dance with the graduating seniors for a while yet.

But I wasn't just having a 'final' dance with great dancing teachers or dancing partners, who had introduced me to this beautiful dancing world - I was saying goodbye to friends.

Sunday was the big OCircus! Commencement Show. And I mean big. We must have had 600+ people in Hales - students, parents, alumni. It was probably twice as full as our Spring shows had been. We were so full people were standing in the back! 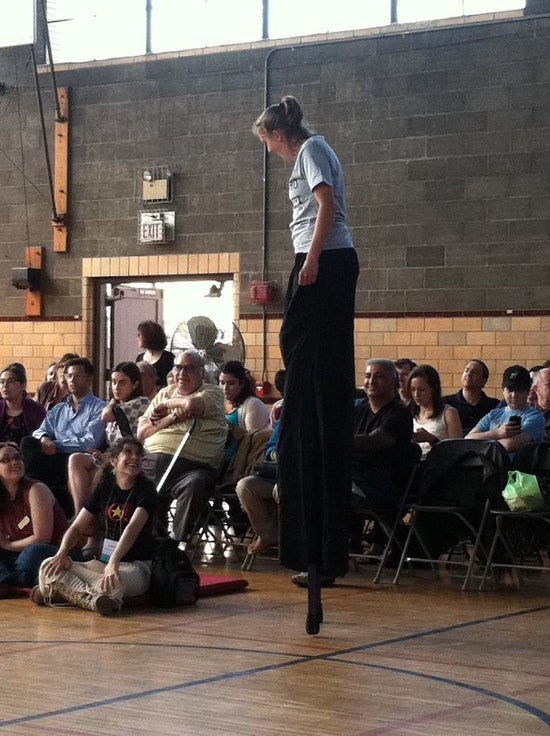 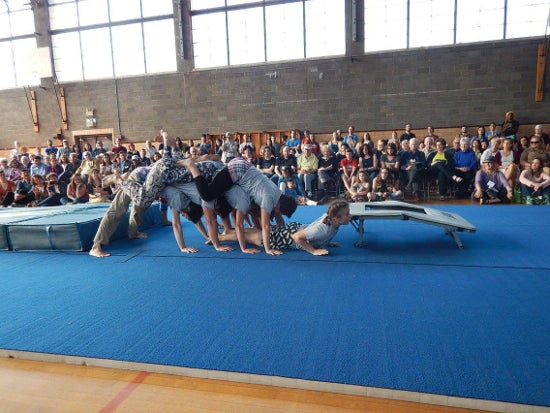 Amy and I reprised the Swing Dancing act but with me wearing the horse mask instead (no photos I could find unfortunately), and of course I was in the pyramid finale. It was awesome.

Honestly though, Commencement Weekend was just jam-packed with so much awesome, besides my dancing and circus-ing. It was the college that I saw on the brochures - perfect weather, outdoor events, live music, smiling faces. Our little town saw the sudden influx of alumni and parents, and it was always crowded when I walked through to Tank. I loved it.

On Sunday night there was something called Illumination, where they strung up lanterns all through Tappan and just went all out: tons of performances, live music, food stalls, spotlights on the Memorial Arch and Peters Hall. It was a celebration, not just for the graduating seniors but also for the parents and the alumni who were back for reunions. Just in case I didn't catch some Seniors after the ceremony, I said some goodbyes.

These seniors were actually graduating. I was actually done with a year of college.

Three more years might sound like a long time, but time is a funny thing. Soon enough I'd be walking through this same square, at the same festival, eating the same famously delicious pies, except that I'd be the one graduating the next day. I had lived my first year of Oberlin with no end in sight, but now I finally understood that it has an expiration date.

I stumbled back to Tank way too late, intoxicated on the brevity of it all, and woke up way too early for an S&S Shift. I was the guardian of the mobility-impaired parking lot, conveniently located right behind the main stage so I couldn't see anything - but I could hear it all at least.

After the ceremony I said some final, surreal goodbyes.

I packed up my stuff. My roommate came by and picked me up, I stayed with him in Cleveland for a night, and then flew out at 5am to Guam, where my parents have moved.
In a week, I fly back to Seattle, where I'll teach summer camps at SANCA and continue my Circus education. I'm excited.

And then it's finally back to Oberlin.

To the seniors I know who've now graduated, thank you. Somehow I find myself 'replacing' some of you in leadership positions in OSwing and OCircus!, and it feels like I have some mighty big shoes to fill.

Most of you probably don't even realise how incredible and inspiring you are, and how influential you've been.

Oberlin will be a little bit less without all of you.

A September in Oberlin

I’m a fourth-year this year, which as a double-degree student, means I am in my penultimate year at Oberlin. And the class I came to Oberlin in 2019 with is graduating approximately 8 and a...

Spring Break in the Smoky Mountains

The Oberlin College Outings Club provided us with everything we needed for a great backpacking trip!

I blinked and the semester is already halfway over.