'Tis the season! You know what that means... Thanksgiving (a first for me this year), Christmas, and College applications!

I still can't get over the fact that it's been a year since I applied to University. That's crazy. I feel like I just applied yesterday.

Anyway, I want to address one thing you might be worried about:

I vividly remember worrying about was where I was going to live after I decided on Oberlin. For some reason, I really wanted to live in Dascomb: the school just sold it to me. The central location, the attached dining hall - that's where I knew I wanted to be.

And then... I was placed in Barrows.

I was gutted. What does Barrows have going for it? Nothing, thought Pre-Oberlin me.

But you know what? Since I arrived at Oberlin, I haven't even thought about it. I haven't regretted being placed here. And it hasn't been as huge of an impact on my life as I thought it would be.

I'll come back to that. But first: A Tour of Barrows! In photos!

Here's what I love about Barrows. See that building on the right? That's the Science Centre. It's literally fifteen metres away. I could theoretically wake up for my 9am Computer Science lecture at 8:59am and make it in time. It's brilliant.

Also, do you see that building in the left in the 'slight' distance, about 50 metres away? (It's bathed in light in this photo.) That's Stevie, the main dining hall. Takes me less than a minute to get to dinner.

The complete opposite direction from the Science Centre to the north of Barrows, lies Phillips Gym, only a minute away. Phillips has one of my favourite places on this campus: the climbing wall. (Hales Gym is also across the road from Barrows, so it takes no time at all to get to my Swing exco or my Circus-related things.)

Sure, it's true that within 10 minutes you could walk anywhere on this campus, so in that sense it doesn't really matter where you live - but I'm still glad that I live so close to these places. The Science Centre/Library and the Climbing Gym are my favourite places on campus, so having them this close is so great.

Most of those posters are months old, but occasionally I'll see something interesting. (Note: with most other poster boards on campus, you can't even see the board anymore, it's just layers and layers of posters.)

Also, while I do live on the 2nd floor, the 3rd floor has really gone all out with decorating their kitchen ('Chicken'), so I'll show ya that: 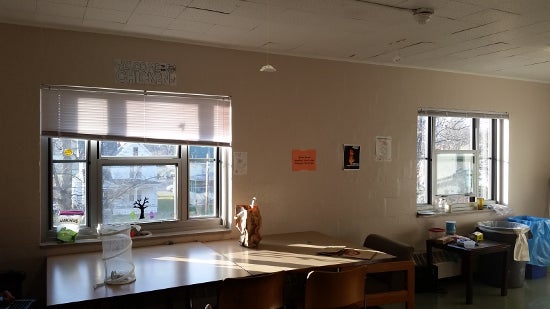 Within the first few weeks of school, the 3rd floor really formed a good community. Recently I haven't been spending as much time with them as before, but I still consider them good friends.

Community. That's something I was worried about. This really seems to vary a lot from dorm to dorm, and even floor to floor. Some of my mates in other dorms have told me that there's not much of a community where they live, but in Barrows (at least when I visit the 3rd floor) there's always been that strong sense of community.

But really, don't worry about that. I've made great friends outside of my dorm - through the climbing team, through my excos (swing, blues, and circus), through my classes, and even just through randomly meeting people.

In fact, I'd even encourage you to actively socialise outside of your dorm group. See, since you actually live with your dorm mates, it's easier to hang out with them - but honestly, it's so worth your time to go out and meet as many Obies as you can: they're all just amazing people! It's really what makes this place so special.

Anyway, back to dorm life. Here's something else you might be worrying about:

And you know what? I don't know anyone who's had a problem with it. It's just not as strange as you might think.

Don't worry, though - your dorm will get to vote on which bathrooms in the dorm should be what. Barrows 2015 voted to keep everything exactly the same as it already was from last year, which is about half 'E' bathrooms and half 'M' and 'F' bathrooms.

Do be prepared to be sharing space with other people. You share bathrooms, you share a kitchen, and you share a lounge. For me, while it was new, I feel like I adjusted pretty well, since I'm naturally pretty extroverted - but if you do have trouble, remember that your RAs are always there to help!

Also, another great thing about Barrows - the bathrooms make me feel like I'm at Hogwarts! Not in the 'Prefect-fancy-bubbly-bath kinda way, more in the Moaning-Myrtle-Haunted-Bathroom kinda way.

We're almost to my room! 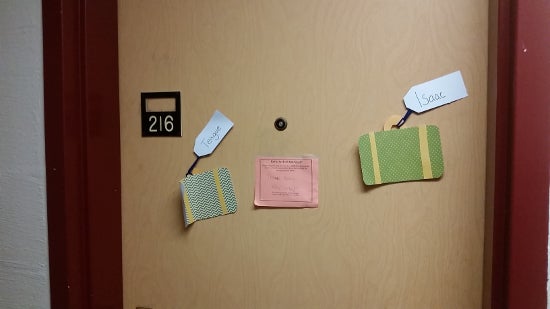 Here we go! You ready? Isaac and I didn't clean up before these pictures... 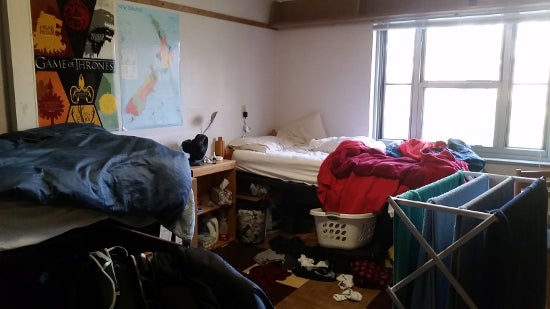 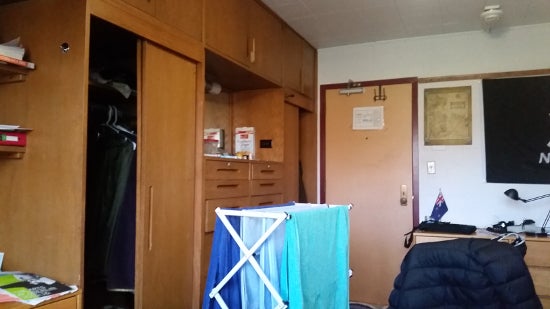 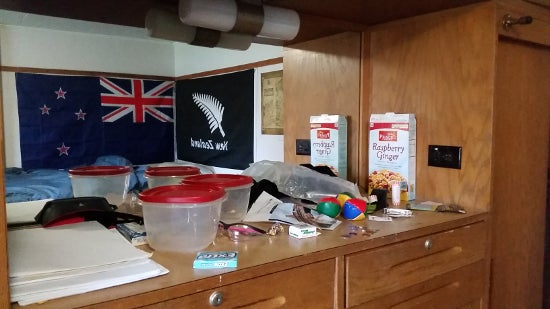 So that's my dorm room. We haven't done much cool stuff with it, so check out my friend's room (which is a single, so she has the room all to herself):

It really doesn't matter where you live.

You know, as I started writing this blog, I thought it didn't matter where you lived because you'll hardly spend any time there - at this point, I'm basically only in my dorm to sleep, to eat brekkie, and to shower. I'm so busy doing so many other things, doing the things that I actually came to Oberlin to do! (Occasionally I'll hang out with my dorm mates - but it's not the place that makes it good times, it's the people. In fact, we bond over whatever problems we have with Barrows.)

But now, I realise the real reason:
It doesn't matter where you live because you'll make it your home.

After nearly a semester, and especially after writing this blog post, I can't imagine living anywhere else but Barrows.