I just moved into the best room on campus. I'm sorry if you live in a quad or have a great view or live with your favorite person in the whole wide world - I still win. I live in a corner room in Tank. It has a tower attached to it. A tower. 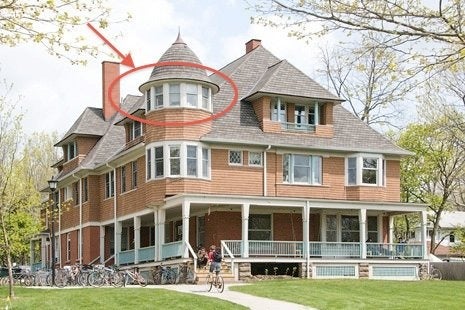 This is the picture I posted to facebook last year immediately after finding out that I was going to live in Tank. Photo cred: the Oberlin website.

The only way to get this room is through lottery - you have to have a good enough number in the housing lottery to get into Tank in the first place, and then you have to get together with other future Tankers and divvy up the rooms (which generally also happens by lottery). We decided to draw names out of a hat to determine in which order we would pick rooms; Sarah and I just happened to be the first names out of the hat. It was pure luck, all the way.

I actually remember that moment quite clearly, heart set on The Room, crossing our fingers and biting our lips, knowing that the universe had already been extraordinarily kind to us by giving us linked housing lottery numbers in the 100s, and hoping against hope that our luck would hold. And then the release - 303 was ours! The disbelief. The joy. The five hours of house meeting being suddenly, wonderfully worth it. I remember laughing out loud incredulously and then trying really hard to shut up because a soft, collective groan had emanated from the rest of the group (obviously, every roommate couple in the room had been hoping for that tower). One veteran Tanker immediately made us promise that we would make it pretty and hold tea parties, which we were absolutely planning on doing anyway.

In the following weeks, my roomie Sarah and I schemed. We talked about The Room when we were avoiding doing homework, we discussed The Room over meals, and we even visited it to measure the tower so that Sarah could sew a giant pillow to fit the floor. Yes, there is a giant, hand-sewn pillow in the tower that was created for the express purpose of making the tower AWESOME. It has giraffes on it. 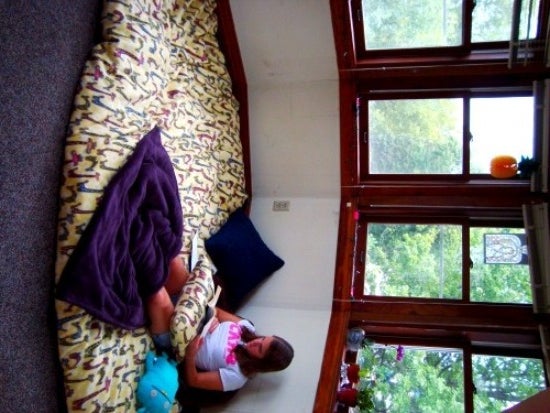 I think I'm in love.

For all our fantasizing, we were still rather ill-prepared to actually inhabit the tower room. It's just so big. I know for a fact Sarah and I have ludicrous amounts of possessions, but we barely fill the room. And then there's all the wall space - we ran out of it in our room in Dascomb, but we actually could not fill the walls of Room 303. (This is also has to do with the fact that we don't absolutely adore every single one of our posters, and we love the room so much that we feel it would be a shame to put anything up that would detract from its excellence. Only the best of the best makes it onto the walls.) Clearly, the only solution was art rental. 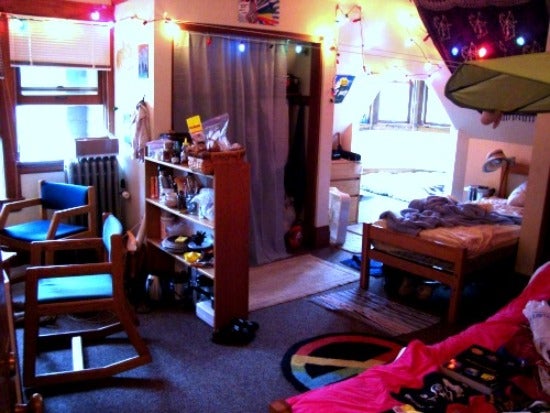 The room, pre-art. This picture doesn't do it justice.

Sarah and I spent last week steeling ourselves for the notoriously long wait that comes before the notoriously great art. We got to the Allen last Friday at one o'clock (PM, don't worry) and started setting up camp; she pitched her beautiful, brand-new tent, went off to class, and I settled in to read my Psych 100 textbook. An hour later, I woke up.

Through the haze of my newfound consciousness, I heard someone just outside of the tent say "I play violin and some fiddle." Fiddle? What? My Irish music radar immediately started beeping like mad. I schlepped my not-quite-awake self outside to accost this person, whoever they may be - and good thing I did, because Leah turned out to be every bit as enthused about playing tunes as I was. In fact, since I'd brought my flute just in case this exact situation should arise (no lie, I'm an optimist like that), we did play tunes. For two hours. And just when I thought the evening couldn't get any better, another girl walked up in between sets and said, "If you play a reel, I'll dance to it."

That's about when my brain short-circuited. I mean, what are the chances? 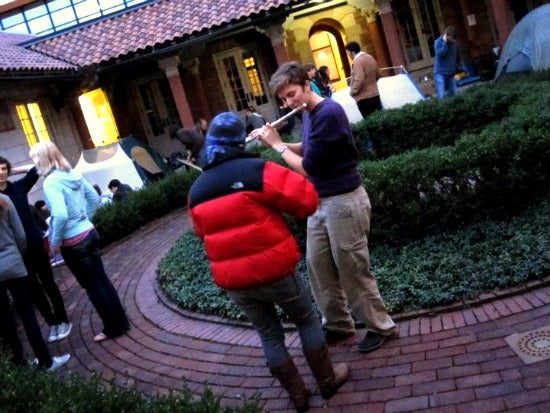 Everything about this is awesome. Photo cred: Sarah Francis.

Over the course of our jam, the courtyard filled up, and more people arrived with different instruments, itching to play their own music. Sarah and I and two friends sang a round. A guy with a guitar formed a circle with his friends next to us and started playing songs - anything from Rebecca Black to The Killers to the Weird Al version of American Pie. Leah and I improvised along with them for a while. Robin, a jazz flutist I met when he prospied last year, also broke out his flute. The circle was joined by a tambourine, a kazoo, a second guitar, some egg shakers, and eventually an accordion and a mandolin. At some point, I stopped playing so that I could hang out with friends of mine who'd come to support me and Sarah in our quest for art, but the other musicians were still going strong when I passed out around two in the morning. I was almost surprised to find they'd disbanded when I got up five hours later. 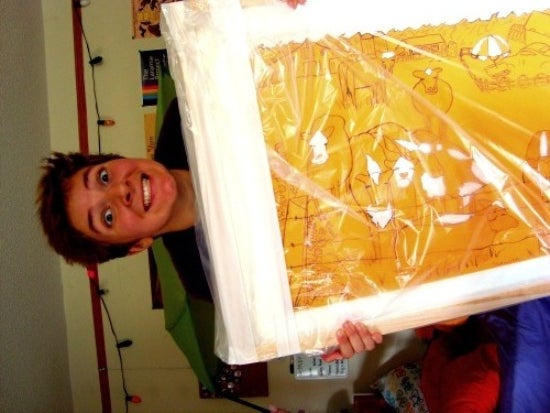 My packaged pieces of art! This is my "you can't see it but I am holding a Matisse that I just acquired and I am SO SCARED" face. 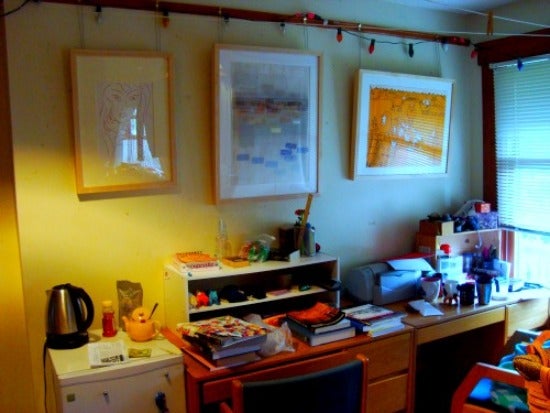 On the left is the Matisse sketch. On the right is Cows, my J. Kathleen White piece that I adore. The middle piece is one of the watercolors Sarah snagged. We were 8th and 16th in a line of over 100, so pretty much got what we wanted.

Anyhow, back to the reason we camped out for art rental in the first place - namely, Room 303. Here's another thing I love about Room 303: it's in Tank. I love Tank. I'm completely sold on the idea of OSCA, and so far it's been wonderful, thanks in no small part to my classy and competent HLECS (Shane and Tristan, you rock). Shane made unbelievably clever door signs for everyone; mine shows a girl leaning out of a tower, holding a rope of recently cut hair in her fist, like a Rapunzel who's had it up to here with all of the 'let down your hair!' crap.

Fun fact: I cut my hair the week before classes started. 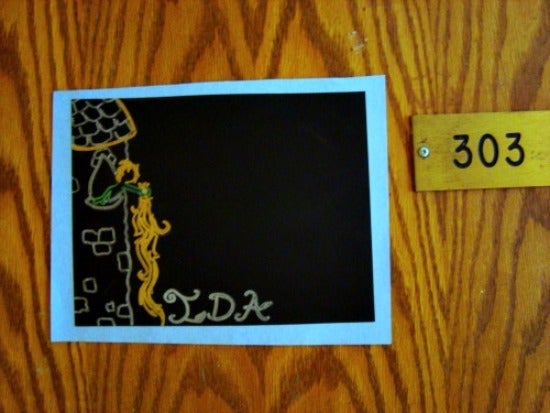 Never have I ever felt so completely embodied by a door sign before.

So now that Room 303 is nearly complete, Sarah and I are starting to think about the ways in which we want to fill it with people. Tea parties? Birthday parties? Dance parties? Slumber parties? Artsy craftsy knitting parties? Study parties? Blanket fort parties? We have big plans. If you are around, you should take part in them.

Postscript: eight hours after posting this blog, I got an email from Julia and Hannah, who lived in Tank 303 two years ago (Julia wrote the Oberlin story I linked to in the second paragraph). The message included the phrases "read your blog," "shrieked with joy," "would love to meet you," and "roommate double date." I just sent an email back that included the phrase "we promise to have the Christmas lights on to welcome you." I thought it was too fittingly magical an exchange to not include here.

First off, I am commenting. The blog void speaks.

Second, I need to visit you and take part in these parties!

Also you and Sarah are awesomely lucky. And awesome.

That was a fun circle of music. I wish things like that happened more often.

Zo: Yay comments! Thanks bunches, and I will totally tell you when we're planning something.

Zoe: If you're into Irish music, Leah and I are starting to organize (hopefully bi-weekly) sessions that you would be more than welcome to attend.

I could say many many things about this post and I will squish most of them into this sentence: OMGMatisseYAYartThetoweristheBESTIthinkthepillowisawesomeandWOWyou'relike
theluckiestpersoneverrrrr.

I also want to note that every time you wrote "The Room" in this post, I only thought of this, which is by and far the worst movie ever made.

"I also want to note that every time you wrote "The Room" in this post, I only thought of this, which is by and far the worst movie ever made."

Apparently, The Room was just the first step on a path to immortality. Or something:

I've never seen this movie (though I have seen Attack of the Killer Tomatoes, which is another notoriously bad film), but judging by you guys' links, it puts me in mind of some sort of cross between Eraserhead and This is Spinal Tap.

I like to think of Tank 303 as more of a cross between Tangled and the Shire. Maybe that's just me.

Speaking of the Shire, how about a hairy-leg, fancy-free hot peppermint or rosehip tea party with random German music and German board games in THE TOWER for your Germies group? Dancing and singing along with total abandon optional? To spite the cold winds outside? If your professors don't have a cache of these indispensable items, I guess I could help out?

Btw, is the art going to rub off on your drawing? Any impressions yet?

Weeeell, I don't exactly have a Germies group yet, but if it happens and people want to, that's not a bad idea! But I doubt the rented art will change my art much, especially since I don't really have time for it these days.

Parties! I hope I'm invited. I have craft supplies, and tea and a banjo. Also, your giant pillow is So Comfortable.

Squeee! This is the BEST. I love this post. And I adore the giant pillow with giraffes on it.

Totally slept on The Pillow last night. Totally the comfiest ever. You'll have to come visit!

I can confirm: this room is the mother of all dorm rooms.

I'd come to Oberlin if I got that room!

Great post! I had the Matisse twice when I was at Oberlin. I also had a Renoir ink sketch and a Gerhardt Richter lithograph (different years). Christina Oberlin 2003.

Hi Ida! I've read this article by chance. I was doing some research and I found your blog. First of all, let me introduce myself. My name is Roberta, and I am an Italian girl. My friend and I are writing a sort of novel (at least we are trying to do it!) and for some reasons we chose the Oberlin College as the ideal set for our story, though we have never been there. This is the reason why we're looking for real students who attend the Oberlin College, because we think that with some help we'll be able to describe places in a more realistic way. If you (or whoever reads this)are interested in giving us some help, we'd really appreciate it. If you want to, please contact me privately on www.facebook.com/roberta.usagi.tsukino or via e-mail at forever_rebel@hotmail.it Thank you for your attention. Have a nice day!

When a group of people cooks, cleans, and eats together, it's pretty easy to make friends and get to know each other.

My Introduction to Pyle

Co-ops are back, and we couldn't be happier!

I learned some handy things the first four times around.