I wouldn’t say I’m someone who believes in the concept of the destination cure, but I guess studying abroad this summer is the closest I’ve ever gotten to it. The destination cure is the idea that any problems you might have can theoretically be fixed by changing locations–going to a new place where your problems are not, even though in reality, problem-solving doesn’t work quite like that. I don’t believe in the destination cure for lots of reasons, but I did have a bit of a downer of a sophomore year, so I suppose that it was a subconscious thought of how I got to studying abroad.

I decided that I wanted to study abroad in the middle of last fall; it wasn’t something I had always planned on doing before I got to college. Frankly, it’s difficult to study abroad as a conservatory student, and even more so for double-degree students. But I went to an advising appointment and talked to my advisor about summer classes, and had one of my famous gut feelings, so I decided to do them abroad.

Studying abroad during the summer turned out to be very practical. I have a lot of requirements to get through in my short time at Oberlin, and it doesn’t make a small difference to have two less college classes to do during the regular term. This summer, with the two classes I took across the pond, I get credit for two full college classes (eight credits) that also both count as 300-level English classes, which I need for my English major.

After an easy application process, I found myself studying English in England–what a concept. I’ve formatted this moderately delayed blog post similarly to how Sarah wrote her post about studying abroad: here are my top ten pictures from my time abroad, listed chronologically in the order that I took them.

1. My first picture in Bath 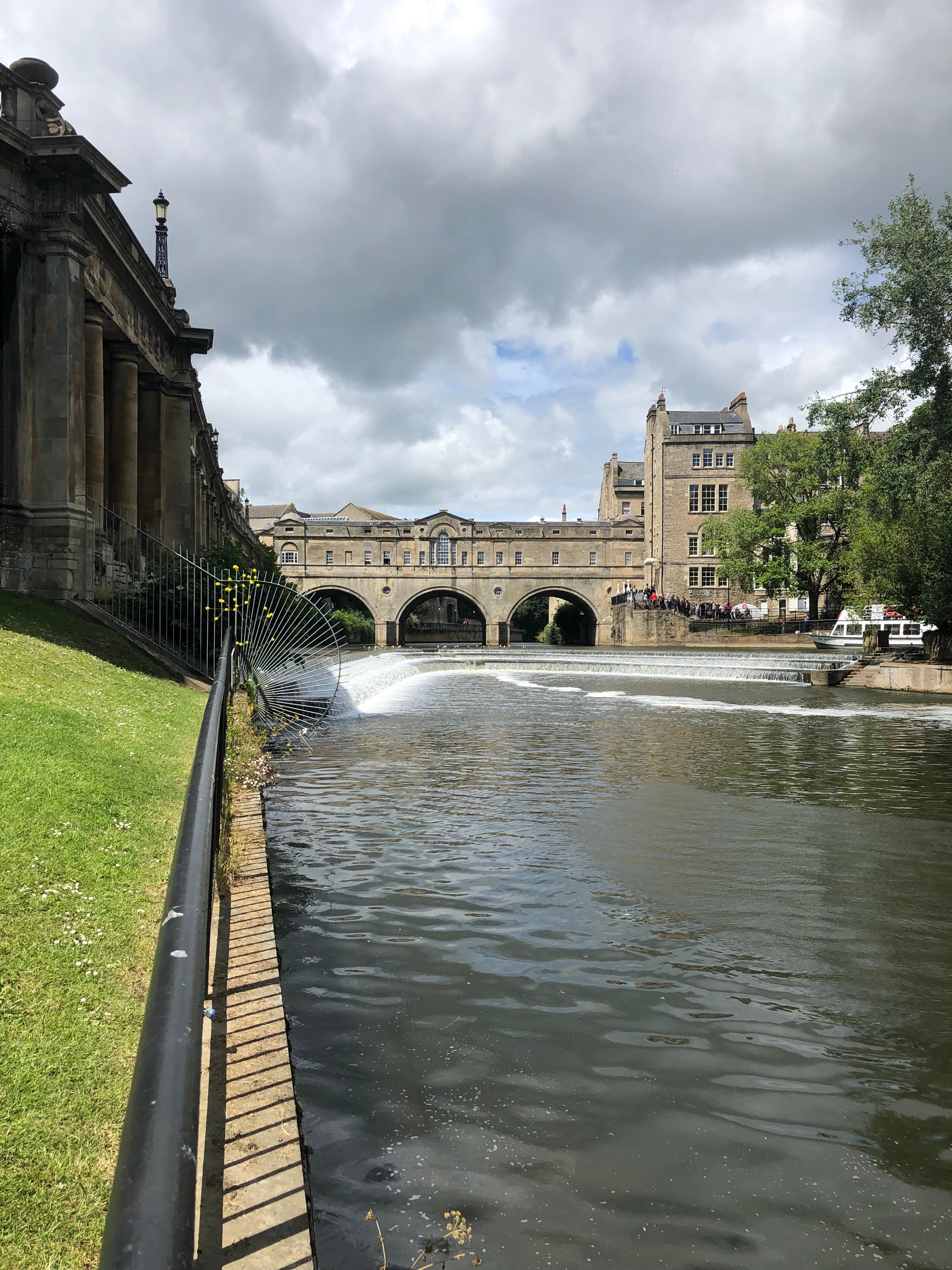 This is the very first picture I took upon my arrival in Bath. After four days exploring London with my mother, I took a train west and lugged my suitcases over cobblestone sidewalks and up two flights of stairs to the room I would be staying in for the next five weeks. I took a walk outside on a truly beautiful day and found the River Avon and the Pulteney Bridge, pictured here. 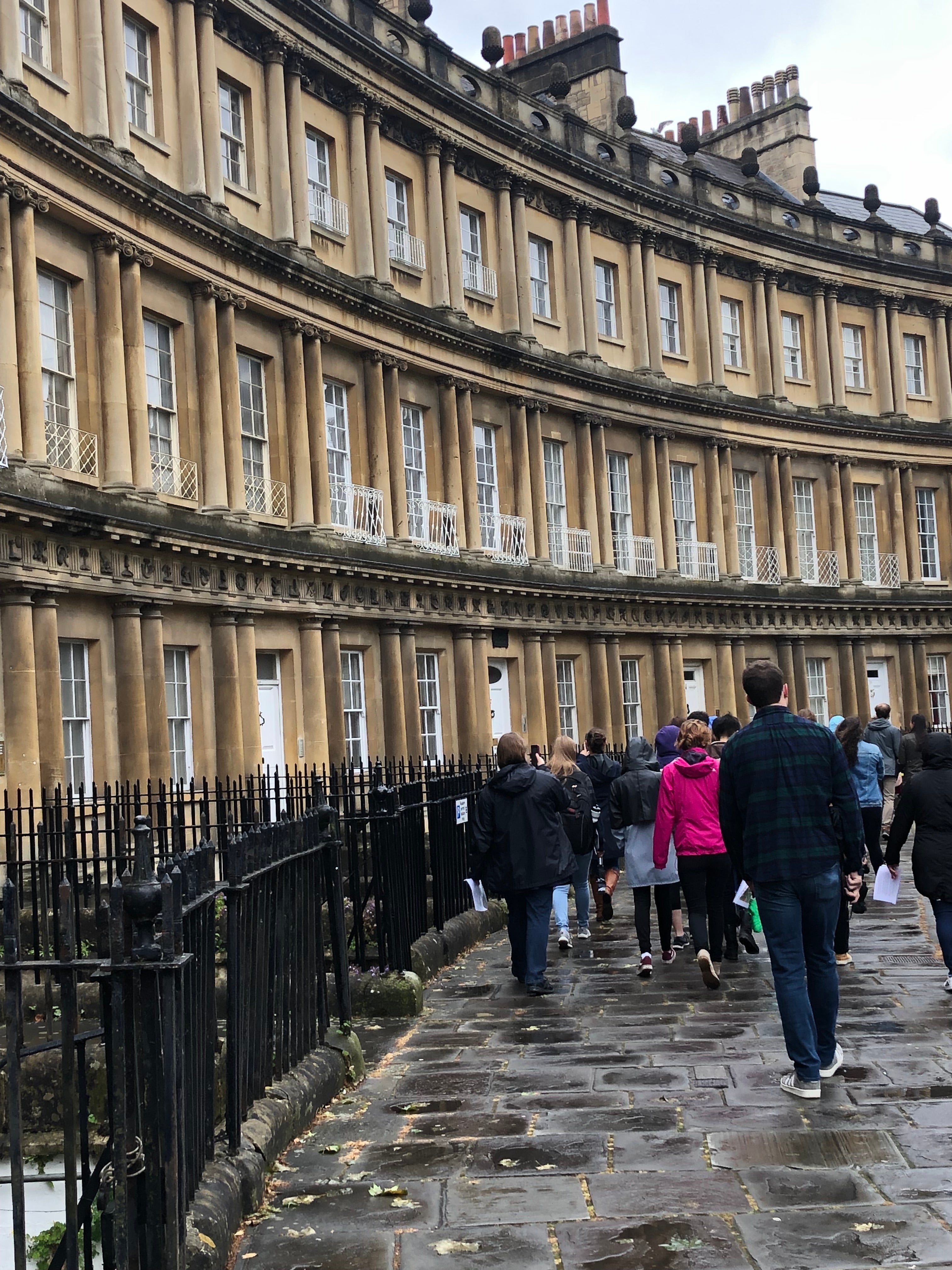 One of the classes I took was entitled “Jane Austen in Bath,” and featured numerous field trips to various locations around Bath to see places where Jane Austen lived, visited, and wrote about. Before coming to Bath, I was apprehensive about taking a class on Jane Austen; I had never read any of her books before, but I suspected that they did not contain much that someone who grew up with lots of fantasy would care for. However, I didn’t have any plans to immerse myself in Jane Austen if it weren’t related to a class, and I would never know if I liked her or not if I never tried to read her works, so I immersed myself in her world for five weeks. This picture is of my class walking around The Circus, which is a street of townhouses that are only slightly related to Jane Austen, but that did make for a very nice picture. Our many field trips helped acquaint me with the city I was studying in, but also gave me important historical context for what life was like for Jane Austen and others during her time period.

3. The Bath Abbey at night One of the only downfalls of living so close to the city center was the tourists. My townhouse was about two blocks from the Bath Abbey, which was right at the city center, and it was always packed full of people–except for at night. At nighttime, when the Abbey was closed, and the only things that were open were pubs, the city was quiet and beautiful. I snapped this picture as I walked across the Abbey courtyard coming home one night. I’m not really a photographer, but even with my slightly subpar skills, you can still tell that this building is marvelous, to say the least. 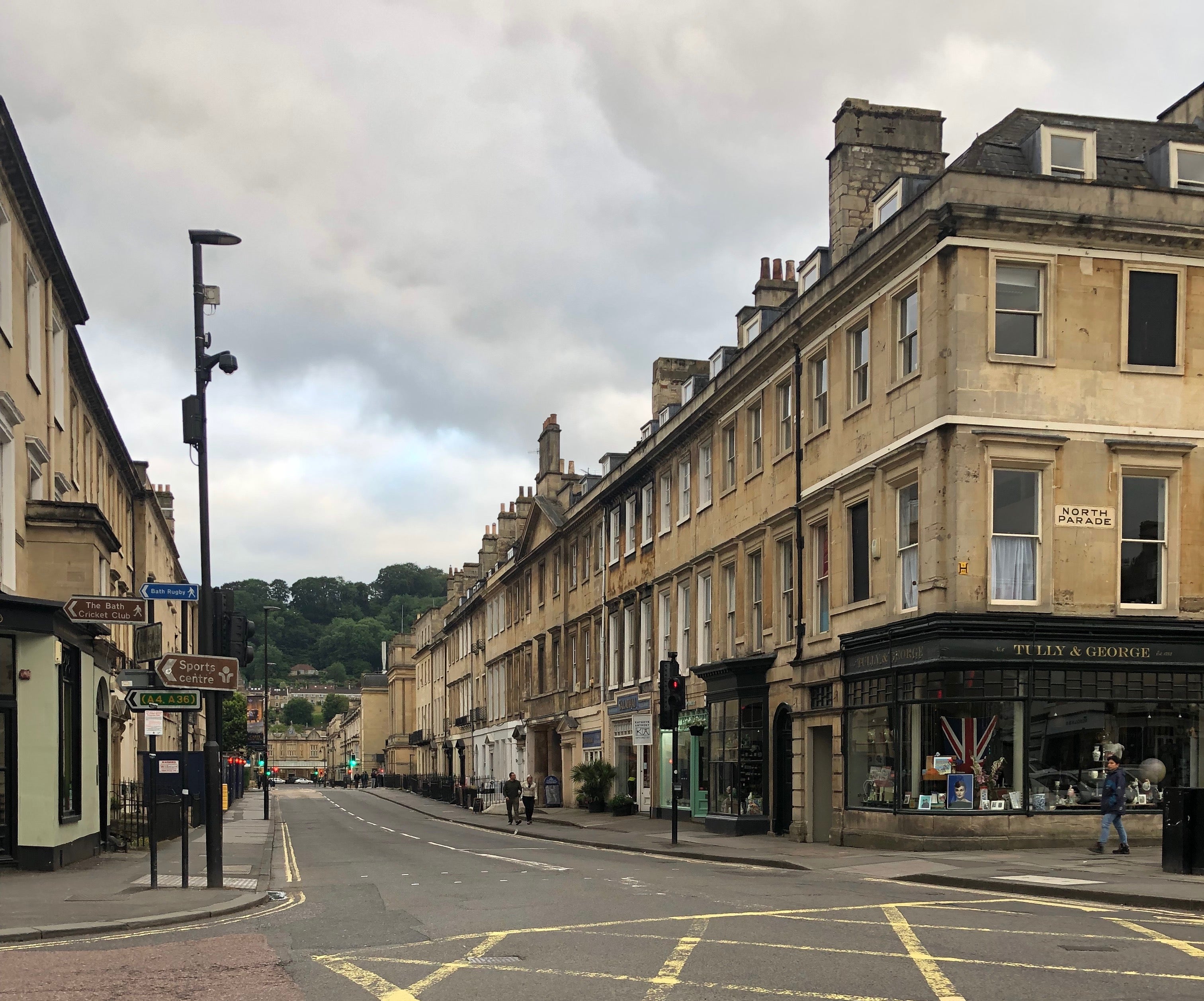 This is my block! Down the little alley around the corner from the cute Thai restaurant on the right hand side of this street is my townhouse. On the left side of this street is Nelson House, which is where my afternoon class was held and where the administrative offices for Advanced Studies in England, my program, are. All the way at the end of this street is the train station. Off of this picture to the right is the Abbey, and so much more of the city. This is my block. Looking at this picture and writing this caption right now, I miss it very much. 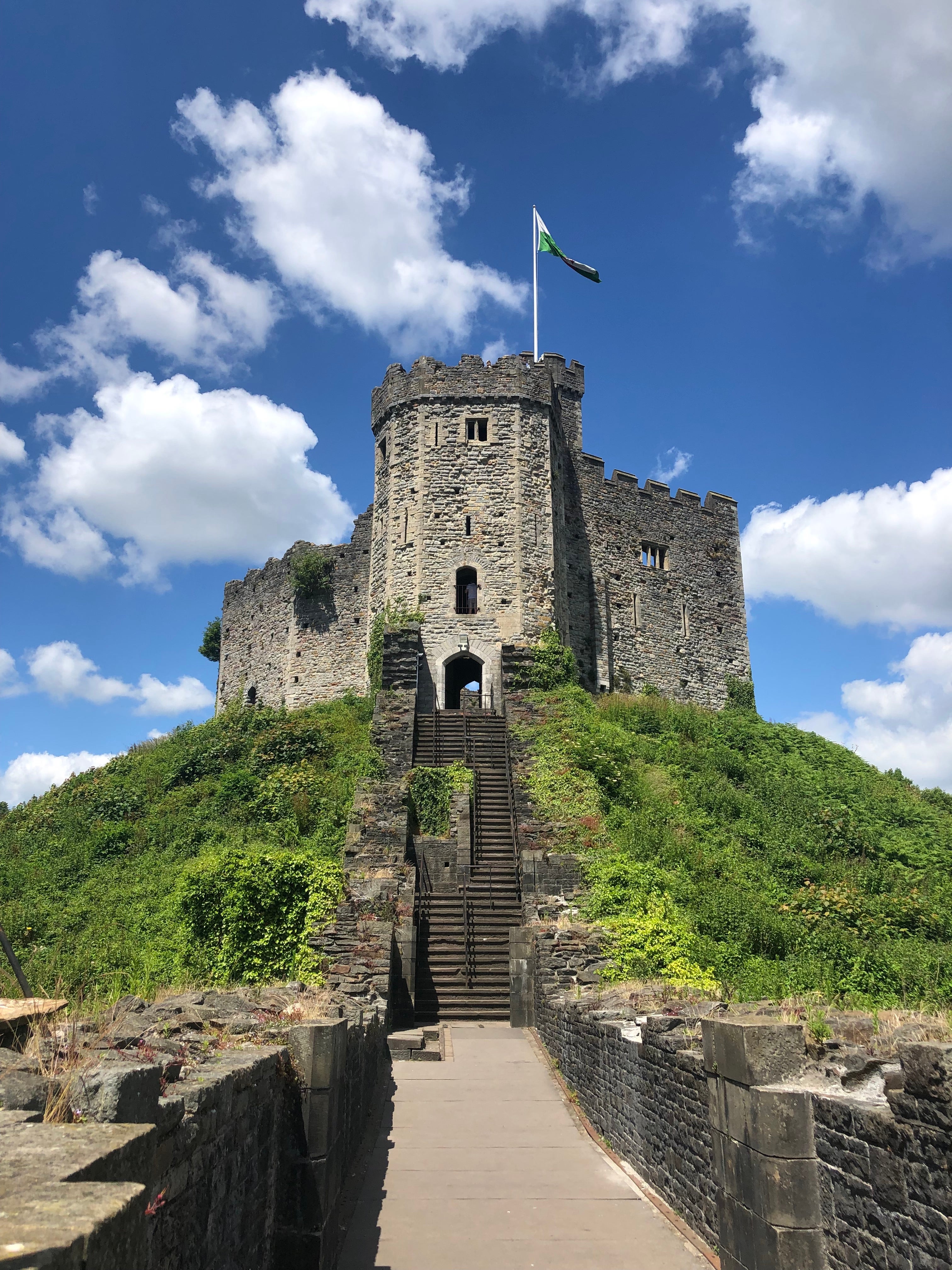 This is the Keep from Castle Cardiff I visited one day. I suppose there isn’t anything in particular that sets this picture of an old building apart from the many other pictures of old buildings I took during my time abroad, but I think that this picture is kind of perfect. This day was the perfect weather to be walking around a place that was new to me and learning about its rich history. When I look at this picture, I can remember the feeling of what it was like to be there. 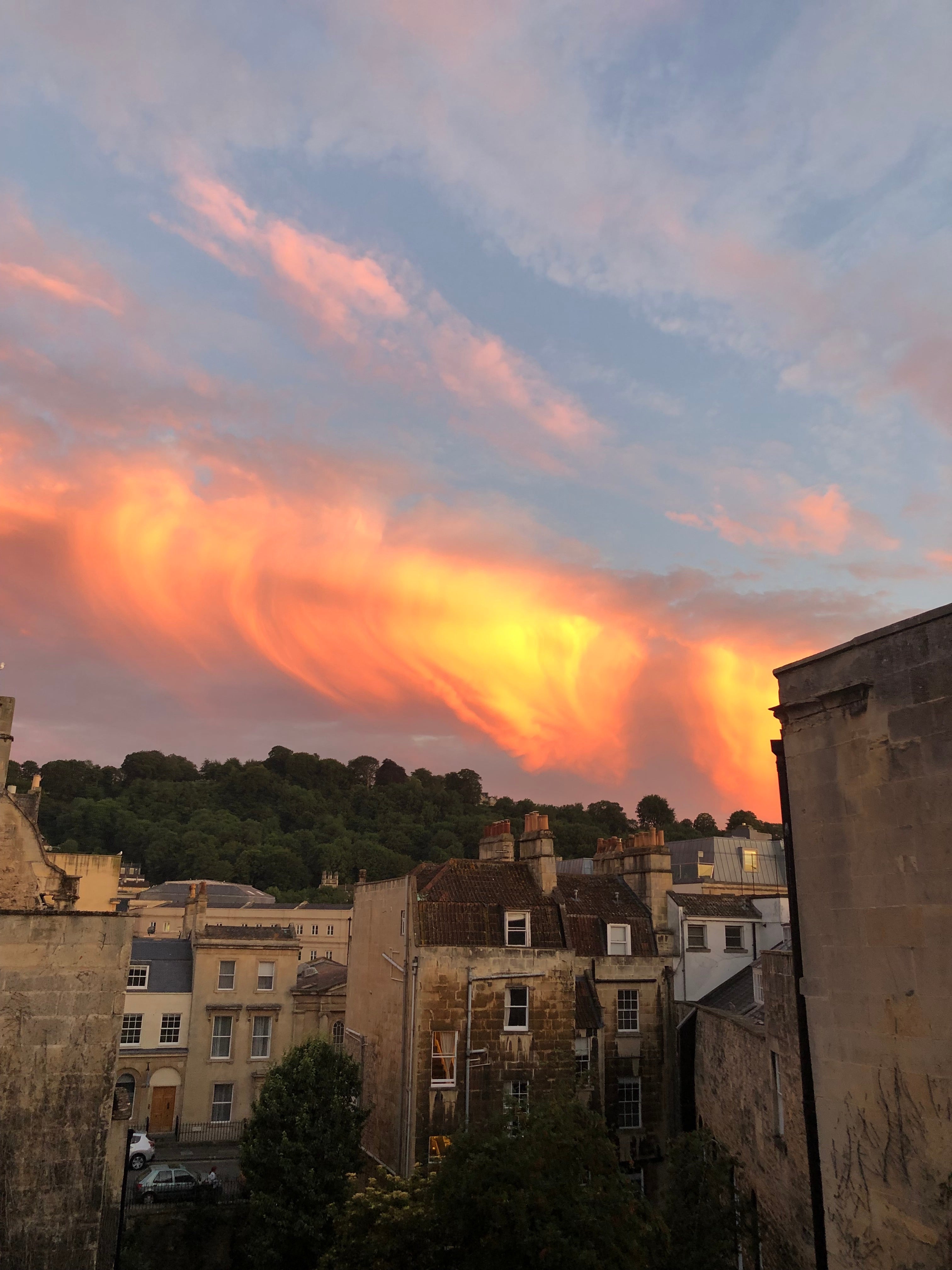 The townhouse where I stayed had a basement plus three regular floors, and there was  a super sketchy staircase that leads up to a tiny little fourth-floor bathroom. In that bathroom, there is a window that leads out to a small balcony. From that balcony, it's easy to climb up onto the roof over the bathroom, and it’s from that spot that I took this picture. When I took this in Bath, it reminded me of sunsets in Michigan and Ohio. There weren’t a lot of stunning sunsets in Bath, but I’m glad that I was able to capture this one. 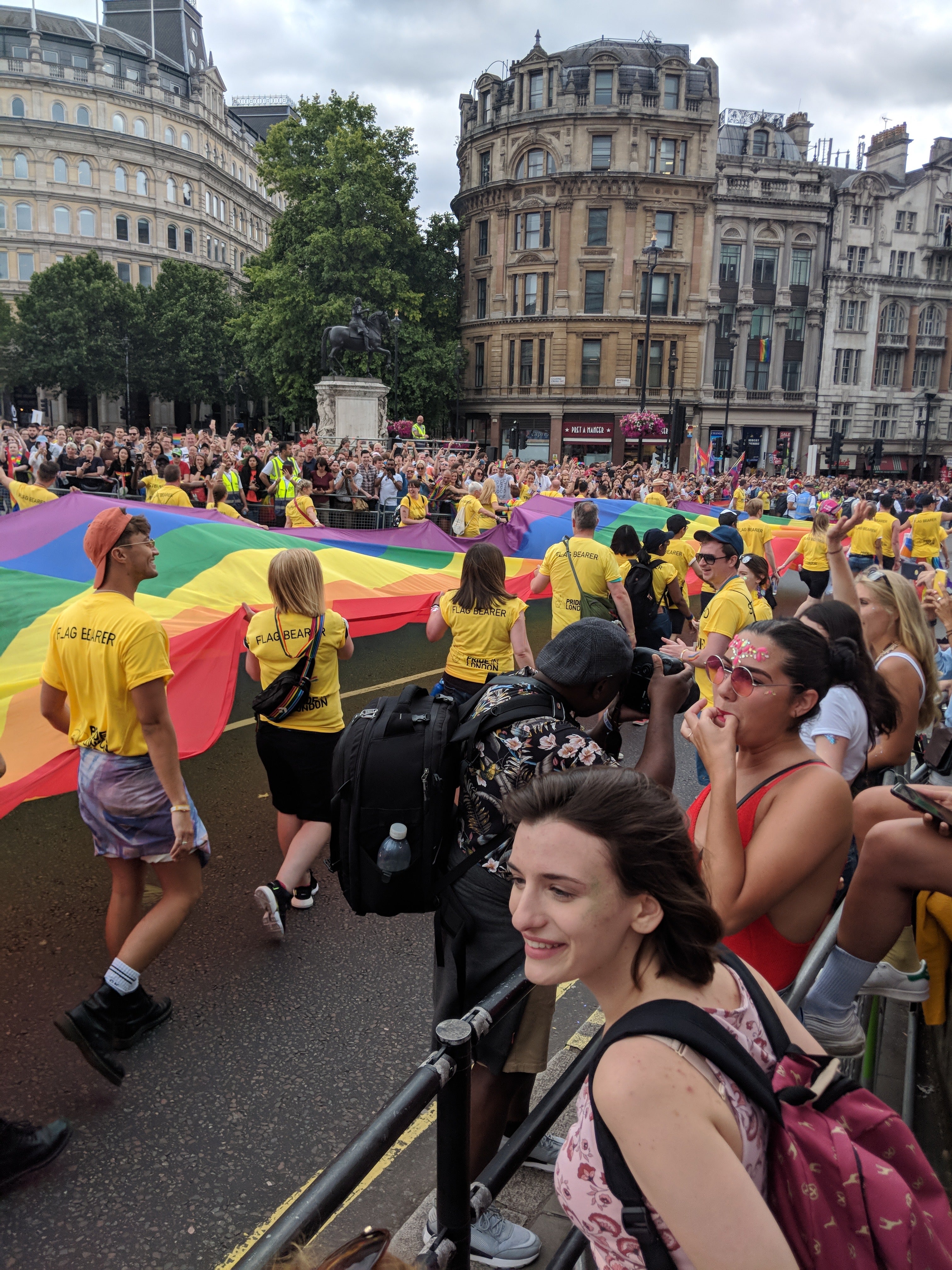 I was incredibly lucky to have the experience of going to London Pride during my time abroad. My roommate and I took a train to London on the morning of July 6th and took the underground to Trafalgar Square, where we spent several hours cheering for different groups related to anything and everything, but all tied together through the commonality of pride. It was one of the most hopeful, positive, and reaffirming events I’ve ever participated in, and it reminded me that as awful as the world can be sometimes, humans can also be extremely supportive of each other. 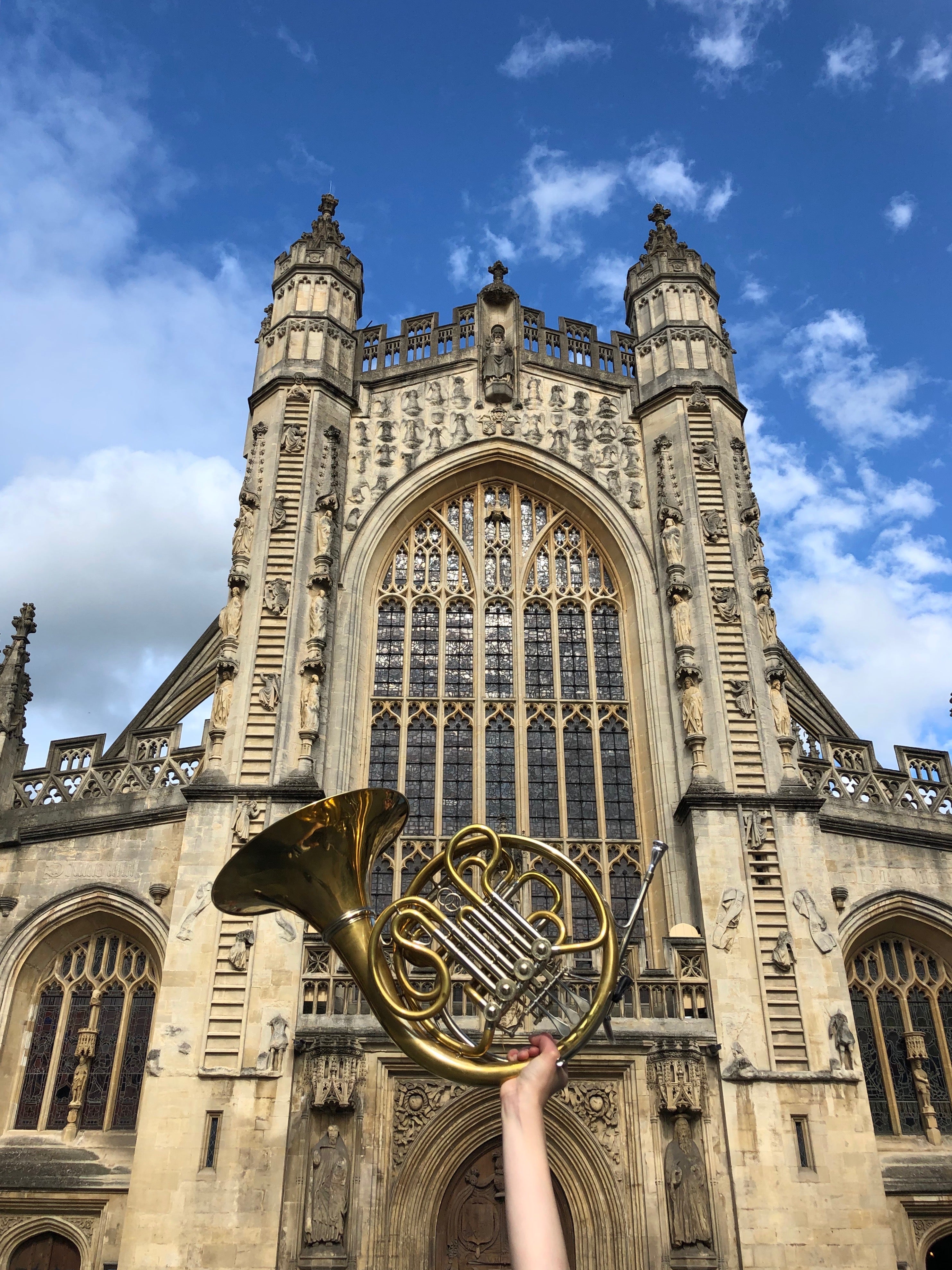 Sarah Willis, the fourth horn of the Berlin Philharmonic, takes a picture very similar to this one whenever she travels somewhere new. Although it got me a lot of weird looks in the Abbey Courtyard, I couldn’t resist getting this moment of me saying “this is my city–I’ve been here.” It’s a family portrait of me, my horn, and the city I spent my summer in. Overall, this is probably my favorite picture that I took in my time abroad.

9. A literal bath in Bath 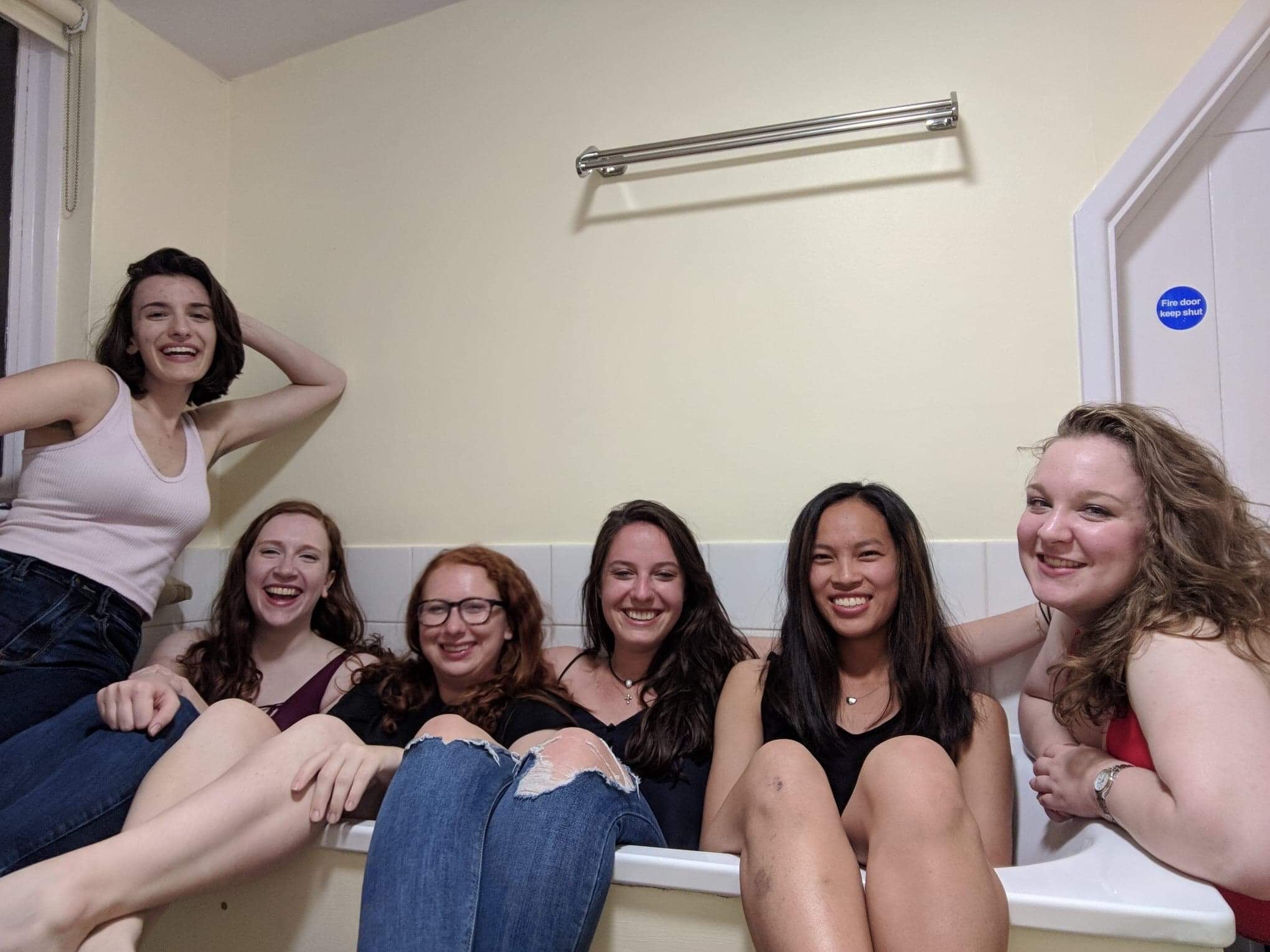 In Bath, I lived with seven other girls in an old townhouse near the city center. In the previously aforementioned fourth-floor attic bathroom of this townhouse, there is a bathtub, and I’m happy to say that my study abroad experience was made complete by getting this picture of us in a bath. . .in Bath.

10. My last picture in Bath 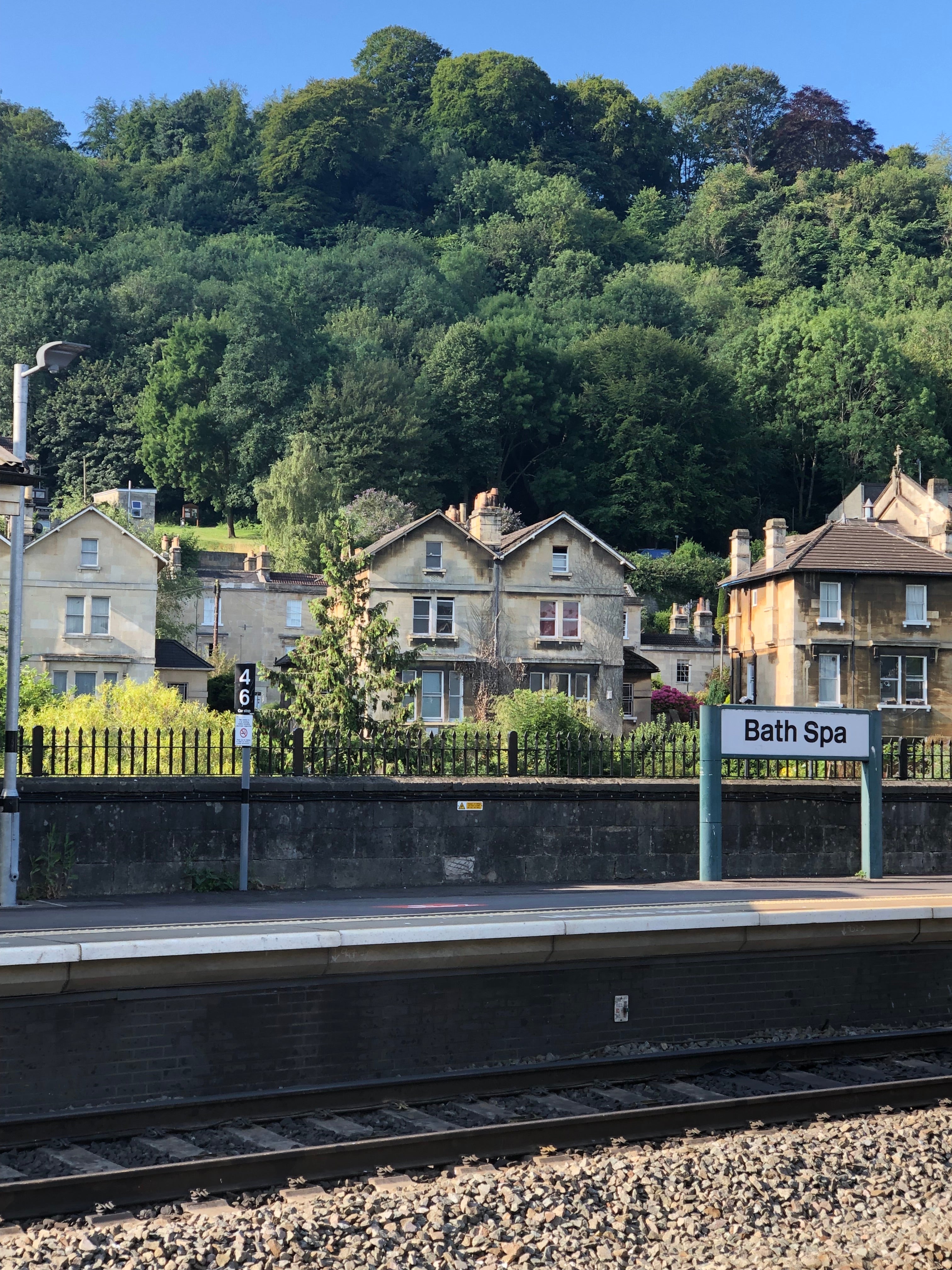 One of my favorite differences between Europe and America was the trains. They’re used as normal public transport, and I used them frequently to go to and from Bath and the many places I visited. My summer train playlist has a lot of songs from the new Mountain Goats album, “In League with Dragons,” and the original Broadway cast recording of Heathers the Musical, both of which I highly recommend. I got lots of good pictures aboard these trains, but I decided to include this one because it shows my city, and it was the last picture I took before returning to America.

Studying abroad made this not like a normal summer; most summers I feel vague and aimless, but in Bath I had a good balance of going to my two classes four days a week, each for an hour and a half, and then on the weekends exploring Bath, going on trips with my program, or exploring the country. Beyond simply taking summer classes, I was immersed in a new city, and getting an experience I wasn’t initially planning on and will probably never get again. Now here I am writing this after I’ve left, reminiscing on the wonderful time I had studying abroad. I hope I make it back to Bath someday.

I love this and now I want to go to Bath... and a pride parade in London.