This is the primary view that I was afforded of the man behind the voice of the Harry Potter audiobooks, one night during Winter Term, while he pretended to be Malvolio, give or take a moment of corpsing. We were sitting ON THE STAGE! at a production of Twelfth Night run by the Globe, having queued up for good seats, featuring Stevie, and lots of his stage directions seemed to leave him like lurking just in front of our little box. I got some pre-show photos: 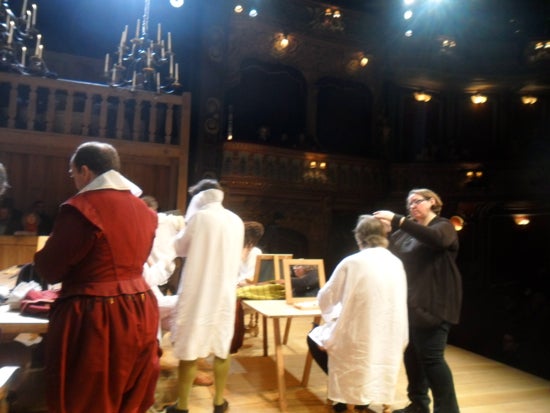 There he is getting his hair back-combed. Who knew? 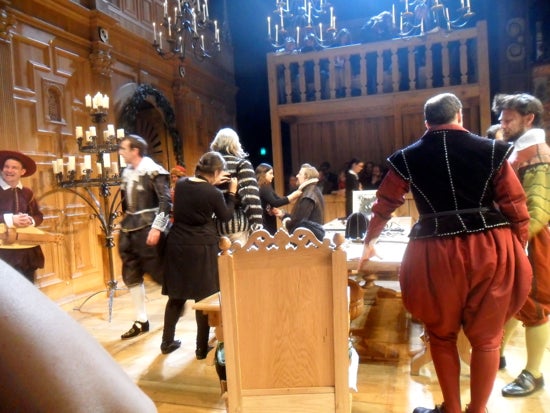 Can you spot the Fry? Getting primped in the back. To the right: the best pair of trousers I have ever seen. 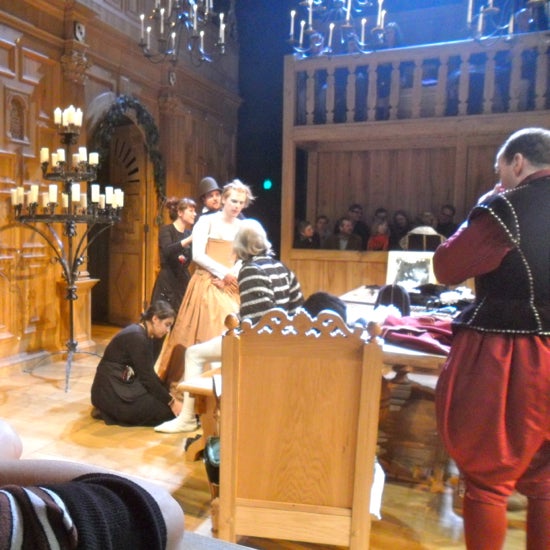 And here's a group of people trying to fit a guy into a dress.

The idea of the staging was basically to bring the Globe to Shaftesbury Avenue, and for everything to happen on the stage, including the wardrobe stuff. Pretty fun! We couldn't have been closer - the spit was hitting us right at eye level. Eating sweets on stage was illegal so we just took all the wrappers off in advance. Things may have gotten a little sticky. 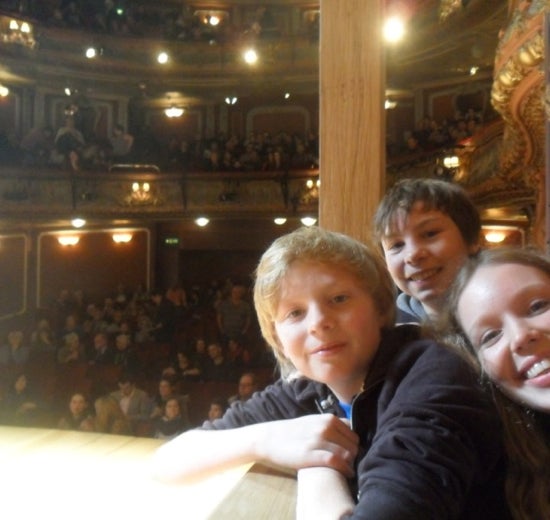 With my honourary brothers, Daragh and Finn. D and F were clear favourites for all actor-audience interaction opportunities, taking part in much hat- and tankard-holding, saving Viola temporarily from a particularly nasty sword-fight, and various other supporting roles. It really was a wonderful show. Oh, how I've missed alto crumhorns and burly men in authentic Elizabethan dresses.

So how does this relate to Oberlin? Well, Oberlin-in-London programme 2013 people, go to this play!! Everyone else, go anyway and I'll find you a couch to surf on. But more generally, Winter Term was a great chance to be home for a month, eat some good food... 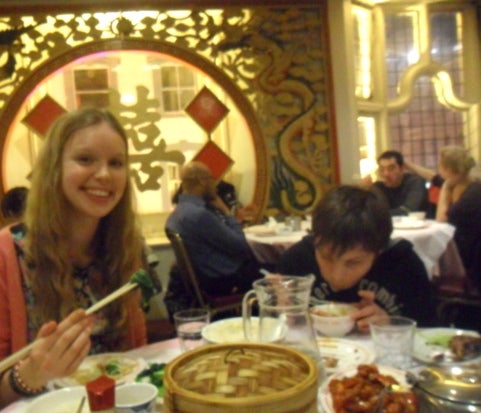 Finn has his priorities sorted.

...have lots of down time and enjoy all the fun things about London before coming back to Oberlin.

I never told you about my last semester! I must have been off the blogs for months. Phew, the work was crazy. Bet you're excited to hear about the 500 essays I wrote...my fingers were aching by the end of it. There was: Virgilian influence in Chaucer, Thoreau's journal writings on music, shepherds in the Iliad, my own, newly discovered play by Sophocles, becoming the earliest example of a play starring a toddler. Yes, little Astyanax crawls out of the gates of Troy and onto the battlefield to save the day....

Having survived 22 credits (you don't want to know where they all came from), I spent the first part of Winter Term sleeping until 2pm and volunteering in a charity shop - my official project. It's a charity called Cancer Research, and my advisor, Dan Stinebring, initially offered to submit the title of my project as 'Cancer Research in Cambridge,' but I thought that might be a tad misleading. Although who's to say that a cure for cancer cannot be inspired by a steamer and a clothes-hanger? So anyway, curing cancer was great fun. I got to meet loads of brilliant people who volunteered with me, and all the oddballs who walked in the door. You really never know and you just hope they're all fully clothed. Charity shops are their own microcosms, full of people who'd never normally cross paths - I think they're very hopeful places. Plus, the clothes are a bargain.

I got several pieces of good news at Oberlin last semester, so will relay those next time. Until then, back to the add-drop madness!

Wow, what seats! Every time someone from the Oberlin-in-London program mentions they went to the Globe, I imagine them sitting in front of the stage like most theatrical performances I've attended (not in London, unfortunately)... but never did I imagine seating right above the stage. That's awesome!

Congratulations on surviving 22 credits (?!) and I hope for a slightly lighter load for you this spring. Good luck with add/drop!

@Ma'ayan (and anybody else who might have been confused): the photos in this post aren't from the Globe. No one sits on the stage at the Globe. The production Ruby saw originated at the Globe, but when she saw it, it had transferred to an indoor theater in the West End.

22 credits!!! Amazing. No wonder you had to sleep till 2.
Love the photos ?.What a show..what a cast...
Take it easy this' semester.
Make time or blogging.
Mx