The Alumni Medal is the highest honor that the Alumni Association awards. The Alumni Medalist exemplifies outstanding, sustained or unique service to Oberlin College. 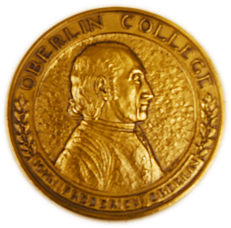 Bonnie and Joel Millikan met during their junior year at Oberlin while serving as freshman dorm counselors. Bonnie majored in English literature while Joel studied economics, played lacrosse, and co-captained the football team. During graduation, under the lanterns on Tappan Square, they became engaged; a year later they married in Philadelphia surrounded by Oberlin friends.

Both went on to graduate school, Bonnie earning an MEd from Cornell University in 1964, and Joel an MBA from the University of Chicago in 1965. Bonnie taught junior high school and was a private tutor, while Joel, a CFA, worked as an institutional portfolio manager and chief investment officer. In 1992, the couple began working together to create and build Cardinal Capital Management, an investment firm in Raleigh, North Carolina, focused on individuals, families, and trusts. They retired in 2012 to devote more time to volunteer work and their family.

Volunteering has long been an important part of the Millikans’ life. Bonnie relied upon scholarship funds and work opportunities to attend Oberlin, and she and Joel earned scholarship grants for graduate school, which they credit to their Oberlin degrees. This motivated the couple’s desire to raise scholarship funds for others. After graduating from Oberlin, they volunteered as admissions representatives and began decades of service as class agents. In 2013, they co-led their 50th Reunion Gift Committee, which raised more than $21 million and inspired Oberlin to grant them an Alumni Appreciation Award in 2014.

The couple’s fundraising efforts at Oberlin have largely focused on support for student scholarships awarded through the Class of 1963 Scholarship Funds. In addition, Joel was a panelist for gift planning seminars and serves as an Annual Fund lead agent. Through these efforts, he inspires annual giving from classmates by soliciting philanthropic dollars that support Oberlin's greatest needs. He also serves as the alumni lead of the Annual Fund stewardship calling team.

The Millikans value the strong, long-lasting friendships they made at Oberlin with classmates of diverse callings and backgrounds. “We were taught, mentored, and inspired by some of Oberlin’s most storied professors,” they say, specifically acknowledging Freddie Artz, Andrew Bongiorno, Tom Flynn, Dewey Ganzel, Clyde Holbrook, Ken Strand, and Robert Weinstock. “These good folks taught critical analysis, independent thinking, encouraged original research, then guided us to graduate school. George Langler, the director of financial aid, was a friend and guide to us, as he was to all Oberlin students in the 1960s.”

Beyond Oberlin, Bonnie and Joel raised three children who have added six grandchildren to the family. Both are elders in the Presbyterian Church and have been active in resettling refugees from Vietnam and Nepal and residents from New Orleans following Hurricane Katrina. Joel led disaster recovery teams to New Orleans and to eastern North Carolina, while Bonnie led a large Backpack Buddies program and volunteer teams working with the InterFaith Food Shuttle in Durham, North Carolina.

Bonnie and Joel have been active leaders with the Haiti Reforestation Partnership, which has planted more than 15 million trees in the mountains of Haiti. They recently led a successful fundraising project to build an emergency services communication tower in the Adirondack Park community of Inlet, New York.

The Distinguished Achievement Award honoree has demonstrated in his/her life outstanding contributions and achievements that reflect Oberlin’s values in a career field.

The Distinguished Service Award recipient has demonstrated in his/her life service or volunteer activities that reflect Oberlin’s values by directly improving the quality of life for humanity.

The Outstanding Young Alumni Award recipient must be 35 years of age or younger at the time of consideration and have distinguished himself or herself in one or more of the following areas: professional career, service to humanity, and service to Oberlin College.

The Alumni Appreciation Award honoree has performed a unique service or made a unique contribution to the Oberlin College Alumni Association.

Nominations are to be submitted to the Office of Alumni Engagement by June 30, 2023. More information can be found via the below links: