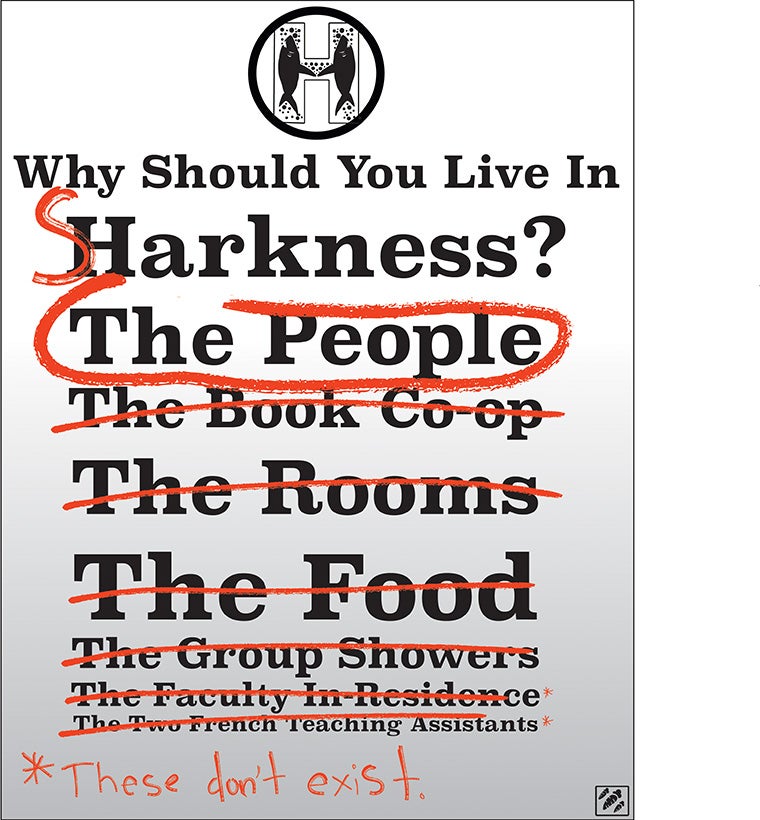 There are many pros and cons to living in any location in Oberlin - tackling the entire topic would just be too much. Instead, I'm going to tell you why my first year living situation was fantastic, and why I'm happy I'll be living in Harkness next year!

Let's start with something that should preface any dorm conversation: the population changes, sometimes drastically, in every dorm, every year. With this in our minds, it can be said that each dorm attracts people who are interested in the reputation of that dorm. I've only spent one year in Harkness, but from what I saw of the older students who decided to return, and the Harkies I know who are returning next year, the people who live there might just be the best thing about it. There are many reasons to love the place (only a few of which I have listed above), but long-winded but refreshingly impassioned policy discussions, and a sense of lively community squeezed into small quarters, together make me excited to call it home.

If you're an incoming first-year and have (somehow) avoided hearing the infamous rumors about it, you'll find a group shower, gender-neutral restrooms, and corners far and wide of the building that seem cold, dark and scary (the elevator, the rage room, the weird space under the stairs). Be assured, gender-neutral restrooms are very convenient in a shared space like a dorm, and I'm personally in favor of them, but if it's really that troubling for you (which is fine if it is!), you can decide to use the "E" system [have an "E" symbol on the door indicate the gender of the restroom at the time] or propose that the restrooms be gendered. All of this gets tricky, and advocates and voting can be used to help you through this process if you're interested, but that's much too big a conversation for here - I've already sidetracked this blog post! Anyway, the same goes for the group shower, but with even more built-in autonomy. Assuming the co-op votes to keep the system, status quo in Harkness is to have signs indicating whether the group shower is "open" or "closed" (read: "you can come in" or "no thanks, I'm not comfortable with anyone joining me") and the system accommodates most people's worries about the mythical gRoUp ShOWERs. As for the deep, dark places in Harkness? Mostly hype. Mostly.

The really rad parts of Harkness? Just to name a few: the food (the kitchen is big and amazing and you'll like it even if you don't think you like to cook), the one-and-only Book Co-op, that provides books (textbooks and various other bound word thingies) in exchange for other books, and the lounge, which has the wonderful couches and chairs (protip: great for playing "The Floor Is Lava!" - just don't hurt yourself). Also, some of the rooms are actually quite spacious, but that's sort of up to the luck of the draw if you're a first-year.

So, with all of these things to consider, what do I think is the best answer to the question "Why should I live in Harkness?" If the image up top didn't already tip you off: the people! They carry a reputation for activism and general rabble-rousing, among other things. While these stereotypes don't hold very much weight, they can be used as a template for the people you'll spend your nights talking to, eating food with, and becoming friends with. There's definitely an ethos that emerges as a result of the stereotype of "activist hippie dorm," and a great example is found in the financial policy protests last semester. Everyone who supported the efforts in whatever way should be applauded, as should anyone who keeps up the efforts in the coming year, but I know personally, the atmosphere of discussion and community that emerged in Harkness when we found out about, and spoke out against, the changes was enlightening to see and made me feel lucky to be a part of a community that encouraged talking and thinking about these issues. Hopefully there won't be reason for the community have to stand like that again, but the same sense can be felt having almost any conversation in the lounge, going to the library every day during finals together, and staying up until 6:00 AM together because, friends. Harkness friends.

Activist, sloth, delinquent, stereotype, mold-breaker, and the people you just can't place a stereotype to - you'll find them all within these walls, and while I can't promise it'll be the most loving, brilliant, perfect place in the world, or even the most invigorating, it sure will be interesting. Give it a try, if you'd like.