"Hi, Pyle!" That's how announcements at every meal start. I didn't expect to be having such brand new experiences at Oberlin, considering I'm already a third-year, but sometimes plans take unexpected turns, and now I'm dining with a co-op for the first time. I know I'm not alone, considering first- and second-years didn't get to experience co-ops in any aspect due to covid, but it's still a little jarring to feel inexperienced at something when you expect things to feel a little less new. Regardless, I'm still grateful for the experience, and I know it's essential for me to regularly try new things since I can still be a bit hesitant at times. So now I'm in Pyle, a dining co-op based in the basement and first floor of Asia House, and even though I've only been here for a few days, I'm ready to tell y'all all about it.

Before I start writing about anything else, I should probably explain what a co-op is. According to Wikipedia (not the most academic source, but let's be honest, this is a blog), "A cooperative is 'an autonomous association of persons united voluntarily to meet their common economic, social, and cultural needs and aspirations through a jointly-owned enterprise.' Cooperatives are democratically owned by their members, with each member having one vote in electing the board of directors." Let me break this down a bit. OSCA, or Oberlin Student Cooperative Association, is a separate entity from the college. When I pay for my semester, I don't pay Oberlin College for dining; instead, I get a separate bill from OSCA. Oberlin College and OSCA are two separate and distinct entities, but OSCA uses the facilities at Oberlin College and has its offices in Wilder Student Union. In the past, I was on a meal plan provided by the college, so I was indirectly paying for all the various costs that went into dining. This meal plan meant I was helping pay for food, labor, facilities, management, and other things needed to run a dining hall. Now that I'm in OSCA, I pay a bit less, but I'm also required to do a bit more work. OSCA is entirely student-run. This means students are the ones who cook, clean, supervise, ensure membership obligations are being followed, buy the food, handle the money, and more. Our common goal is to make food on campus accessible, whether that be through decreased price, careful attention to allergens and cross-contamination, location, or otherwise. 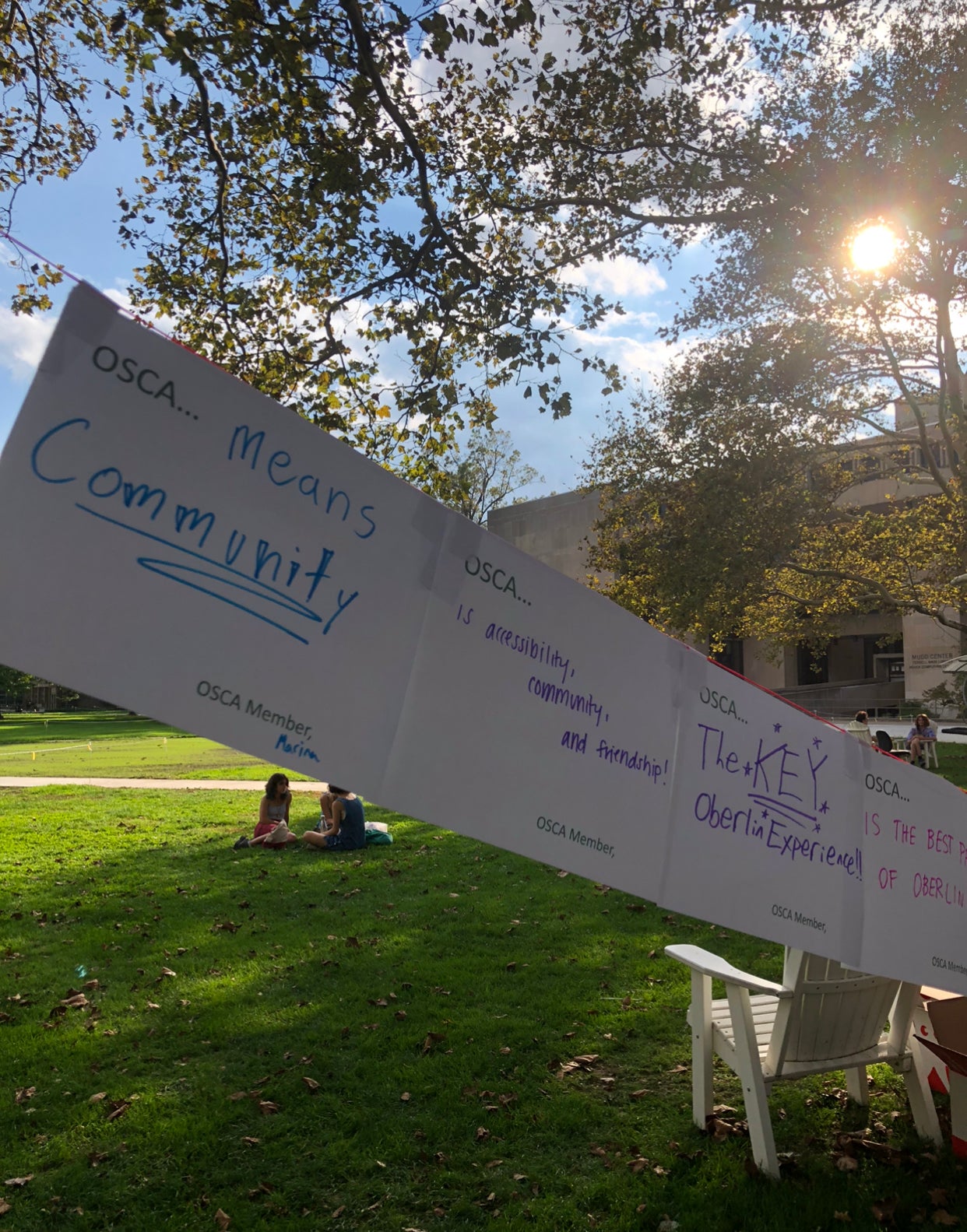 Part of what keeps the price of joining a co-op lower than most meal plans is that members are required to put in about 4 hours of labor (unless you have Time Aid, which I'll talk about in a second) for the co-op each week. This labor isn't directly paid for since we don't clock in and out or receive a paycheck, but it helps to keep the cost of co-ops lower than a meal plan through the college since there's no need to hire cooks, line servers, dishwashers, or most other staff. I personally don't feel I have enough time to hold an elected position (which would fulfill my time requirement), and I'm not the biggest fan of cooking, so I mainly help with crew shifts, meaning I help clean and sanitize the kitchen and dining area after meals. If you are in an elected position, most of the time, it covers all or most of the 4 hours a member has to contribute. Since my freshman year, I've been curious about joining a co-op, but I was pretty concerned about the time commitment. When you're already a full-time student, committed to various organizations, and working a job, it can feel overwhelming trying to balance it all. I thought joining a co-op wouldn't be part of my Oberlin experience. News flash, I'm not the only Obie with these responsibilities and concerns. That's where Time Aid comes in. OSCA is run by students, and so they understand that some students need to work while they study to finance their education. For the first five paid hours a student works a week, they get an hour shaved off their weekly 4-hour requirement. For each additional four hours of paid work a student does each week, they get another hour shaved off their time commitment for OSCA. That means if I have a part-time job and work nine hours a week at that job, I only have to contribute 2 hours to my co-op; if I work 17 hours a week, the Time Aid I receive should technically cancel out the work I would have otherwise needed to put in with my co-op. So yes, even if you're busy, you could still be in a co-op if you wanted to.

I will say that sometimes I miss the flexibility of being on a meal plan. I still have the freedom to ask for a Save Plate, so if I can't make it to lunch or dinner on time, I know I'll have food waiting for me, but at times I miss the spontaneity of a walk to Decafe at 10 pm with a group of friends. Regardless, being in a co-op has just asked me to be open to new things. I might be taking fewer walks to Decafe, but I could take a walk to Pyle if I have a late-night craving and cook in the kitchen, use some of the ingredients they have available, or simply grab a snack from the tasty things table, where the tasty things makers have prepared and set out (you guessed it) tasty things. Sometimes, there's granola, oats, loaves of bread, or something completely different on this table. Like I said earlier, OSCA takes allergens, cross-contamination, and food safety overall very seriously. Since I'm part of the co-op, I know what protocols are in place to avoid cross-contact, and as a person with gluten intolerance, it helps me sleep better at night. The strict enforcement of food safety means that there's a list of ingredients for every food item at every meal. I'm incredibly grateful for this since not everyone understands gluten sensitivities very well; even I mess up sometimes, and I'm the one with the gluten intolerance. When the ingredients are listed, they even go into specifics such as whether the cook used gluten-free or non-gluten-free oats and list which special diets the dish has restrictions for. If someone emails the co-op members about something they made for the tasty things table, they'll even list the ingredients with allergens in bold. Having these ingredients clearly listed means that someone who's dairy-free, gluten-free, vegan, or otherwise will know right away if they're able to eat the dish without having to second guess themselves or the head cook. Some allergens are so severe that we don't even cook with them or bring them into the kitchen, such as eggs or nuts. Being in a co-op means being in a community, and as a community, we must be committed to looking out for the safety and health of one another. 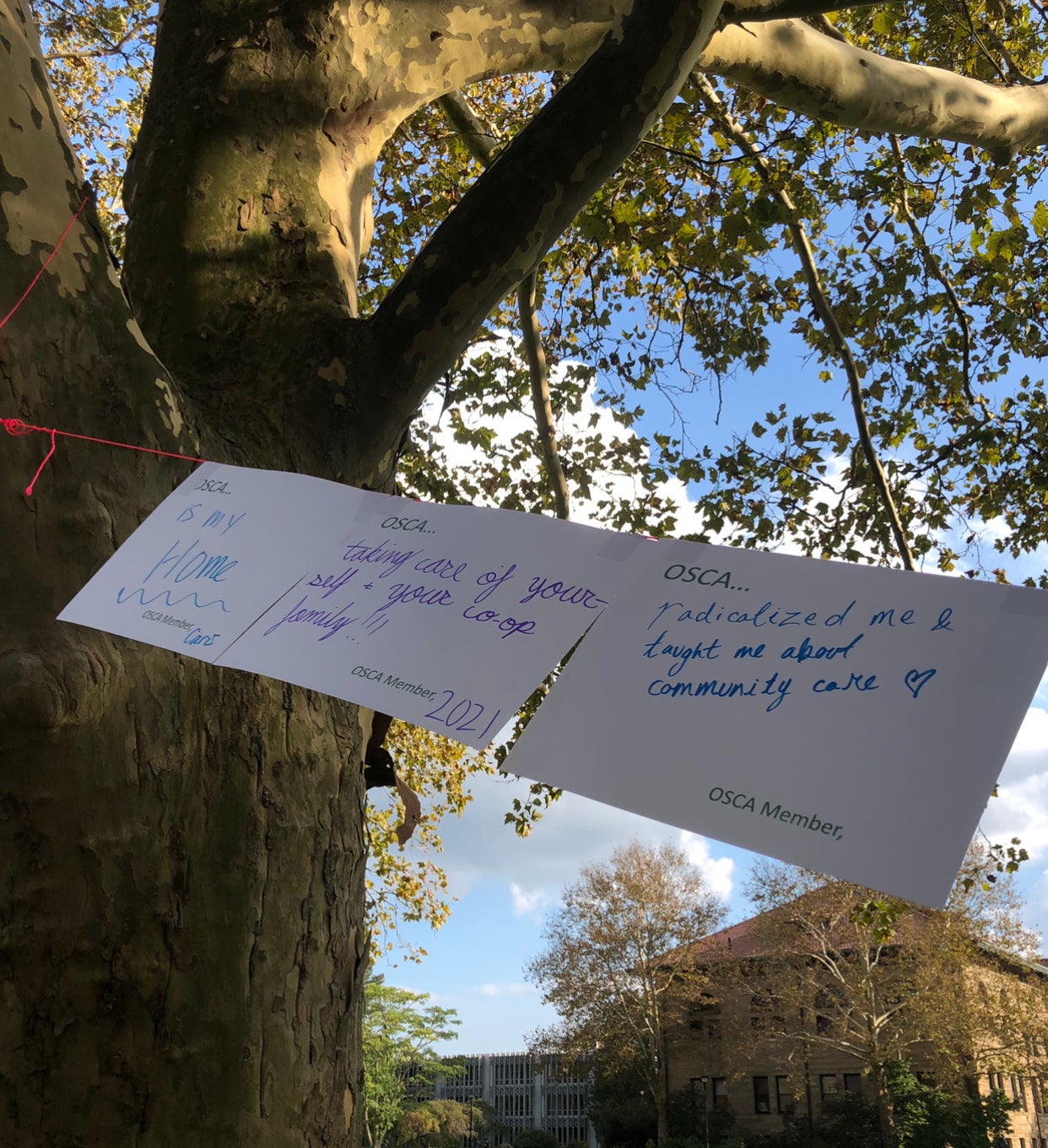 We look out for each other in more ways than one. When a group of people cooks, cleans, and eats together, it's pretty easy to make friends and get to know each other. Since it is the beginning of the year, we're currently holding elections for various positions. I've seen members excitedly endorse friends who they think would make great Head Cooks or Bread Makers and consider things such as their class year and if they're studying abroad or have a semester full of research ahead. Many things in the co-op are held at a vote with a not-so-common voting system. It's a bit more complicated than a simple yes or no, but it makes sense when put into practice. When asked for general feelings for a discussion at hand, you can give a thumbs up for a good/yes, a sideways thumb for not sure/"I don't think I agree, but it would be good for the co-op," or a thumbs down for bad/no/"I would leave the co-op if we decide to take this route." I like that there is a bit more nuanced than just yes or no choices and that overall the good of the co-op is the emphasis in the decision-making. We may not always agree 100% of the time, but it's easier to gauge how members feel when the voting system has that level of nuance.

Now that I've talked quite a bit about the technical parts of being in a co-op, it's time to address some of the fun stuff! Let me start by saying: yes, the food is good. Even though we care about dietary restrictions and need to be a bit more creative when making meals sometimes, the food is good. I described it to a friend as having a Chipotle bowl many days since beans, rice, veggies, and lentils are staples in the kitchen. In Pyle and a handful of other co-ops, we also have pizza night on Fridays! So as tradition, we have pizza and read from the Crushes, Compliments, and Conspiracies box that Pyle members add to throughout the week. All co-ops have varying traditions that make them unique, so it's very much appreciated when we're all able to come together. To mark the return of OSCA from a COVID-induced hiatus, OSCA alumni sponsored an ice cream social where members from all the co-ops could get a free OSCA t-shirt and scoop of ice cream so we could all come together and get to know members of other co-ops. (I've even attached photos of different things people wrote about what OSCA meant to them.) Even after graduation, alumni appreciate the relationships made in co-ops and the importance of OSCA, which is why they give back.

Though I haven't touched on every aspect of co-op life, I hope this gave a general overview of what it's like to be in a dining co-op at Oberlin College (I haven't even talked about the living co-ops or how to get into OSCA!). I've only been in a co-op for a week, and I've already met so many new people and learned so much, so I'm excited for what the rest of the year holds. Until next time, love and lentils.