Sigh... So it's been a month now since the season ended and I'm starting to figure out life as a non-athlete.

My senior season was the weirdest season I have ever been a part of. We finished with a record of 3 wins and 22 losses, the worst of my entire basketball career. But I honestly can't say we were a bad team. In fact, in my eyes we were one of the best teams I've been on. With the exception of 2 games, we had a chance to win every single one of them. It's frustrating to think that our record could have been 22-3 just as easily as it was 3-22. My goal coming into Oberlin College Basketball was to win the NCAC (our conference), which would allow us to compete in the postseason NCAA tournament. That goal was not reached, and it's a weird feeling knowing that I'll never be able to do anything about that.

I'll always remember how horrible a record we had my senior season, but I'll also always remember this season for another reason. In this current climate, with everything going on with race relations and racism in this country, the team decided to wear special warm up shirts. The shirts said "UNDERSTANDING PREJUDICE .ORG," which is a website intended to spread knowledge and understanding of the causes and effects of prejudice. The idea was for us to act as free advertising for the site. I imagine that as fans came into the game to watch, they noticed our shirts and tried to get a closer look at them. Curious, they looked up the website on their smartphones which hopefully led to something positive when they left the gym and went home. I've been really interested in the influence that athletes have in our country, and I thought this would be a way we could join in on the conversation we're having thanks to the likes of Colin Kaepernick, LeBron James, Carmelo Anthony, as well as many of the women in the WNBA such as Tina Charles and Natasha Cloud, to name a few. Athletes speaking out in these ways may seem unprecedented, but I say this athlete activism is actually being revived. I say revived because I think of the 60s and 70s, when prominent Black athletes such as Muhammad Ali, Jim Brown, Kareem Abdul-Jabbar, John Carlos, and Tommie Smith (who was actually at Oberlin for a short stint) were using their platforms to promote civil rights. And that's just to name a few. 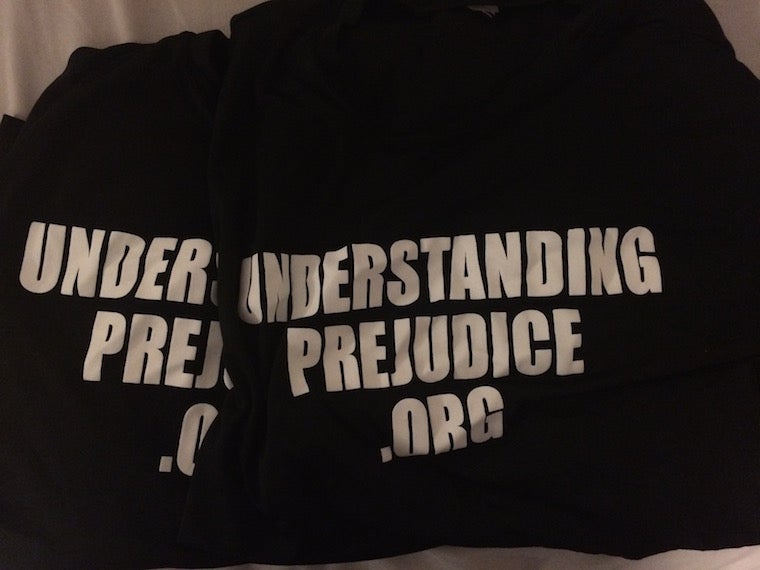 Our warm up shirts

Before I knew it it was Senior Day... a day I always knew would happen but never thought it would come so quickly. It was a very emotional day with my fellow seniors and I capping off our 4-year careers at Oberlin College. This year was our first time not making the tournament, which meant that our senior day was also our last game, and it was at home. We were able to channel the anxiety from this anticipation--and we came out torching them. I mean it seemed like every shot we put up was falling. 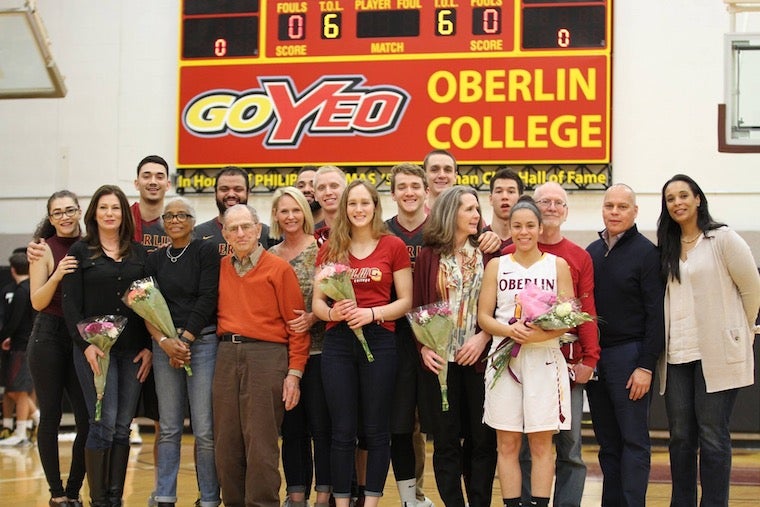 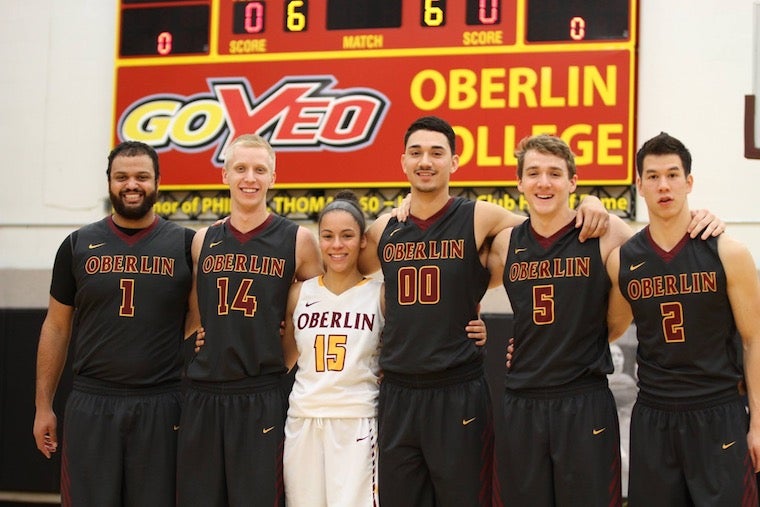 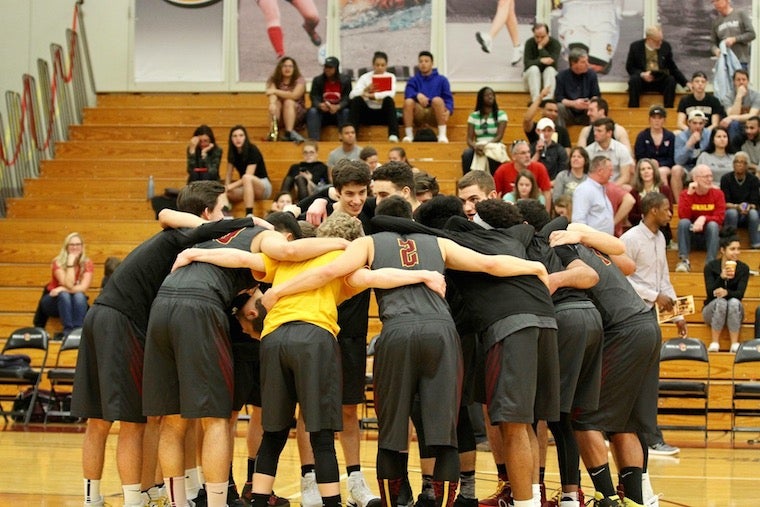 That day the crowd was raucous--the loudest I've ever heard it at Philips Gym. We went into halftime up by 17 points, and somehow ended up losing by 3. Then it hit me. I'd never play that level of competitive basketball again. I'd never suit up with that "Oberlin" on my jersey again. I'd never get to read a "low help" or scout the other team's plays again. The tears flowed. 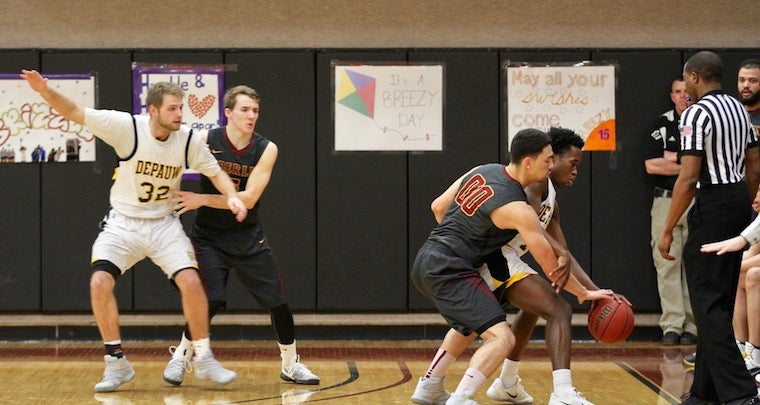 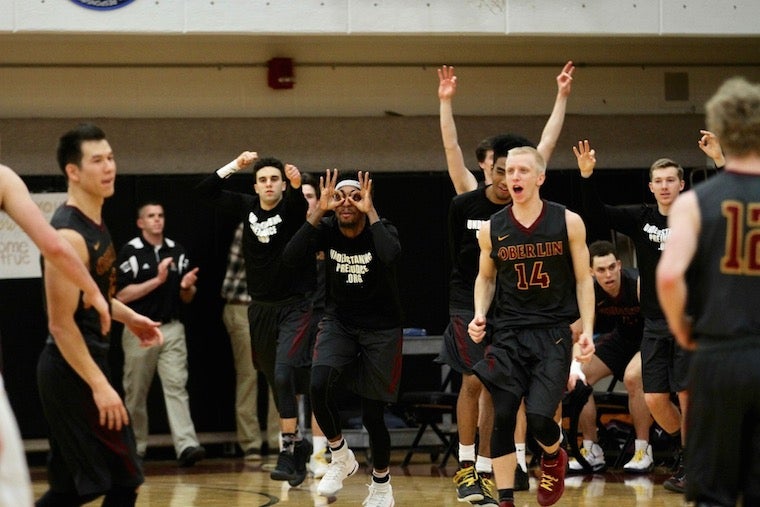 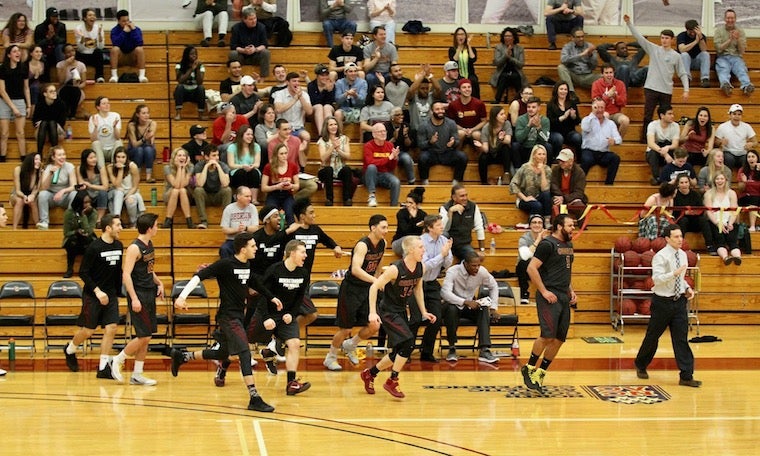 That final game was on February 18th. For two weeks after I didn't know what to do with myself. This is the part they don't tell you about. Many athletes aren't prepared to step away from the game. I started feeling for all those pro athletes who bounce in and out of retirement, or the ones who just hang on to their sport way longer than their bodies will allow. When your athletic career ends, it's like you lose part of your identity. I had never not been an athlete. It was weird to know that I now didn't have to work on my game or lift weights or run on the track. If I didn't work out, nothing bad would happen, since I'm no longer preparing to play a season next year. I don't have a trainer or teammates anymore that are going to make sure I keep in shape, so I have to figure out how to be a "regular" adult and schedule exercise for myself.

Now I'm transitioning into playing ball as a retired college player. I've joined the weekly noon hoops pick-up runs, also known around here as the "Inefficiency League." I think this is a pretty unique thing to Oberlin: the Inefficiency League features the athletic talent of college professors, college coaches and administrators, people that grew up and live in Oberlin, and also other college students. As a senior in college, it's especially great to be able to have fun with and get to know professors outside of an academic setting.

After the season my role as a student-athlete was not completely over. A couple of weeks ago I was on a student panel with six other student-athletes that spoke with the Board of Trustees to offer insight into student-athletic life on campus. This is a pivotal moment for Oberlin College because we are searching for a new college president. It's also a time that Oberlin needs to make important decisions about how it will operate as a college moving forward--this is a role of the Trustees. For all of us student-athlete panelists, our sport and our coaches were what recruited us to the school. I was able to share with the trustees not only the perspective of a student-athlete myself, but also some of the research I've done which coincidentally is on the subject of the role of sports at Oberlin College. We were asked the question: "What is the one thing you would change as a student-athlete at Oberlin?" That was the question I came for.

I hope we can be the Oberlin College that it is famous for. In the past, Oberlin has recruited, accepted, and then graduated numbers of Black students, low-income students, and first generation college students. This story was especially true on the basketball team, my research shows, and these students were able to go on and have success in college (after an adjustment period) and have attained post-college success in industries such as higher education, law, government, and media. But I'm sad to say that this pattern of recruitment and admission seems to be more of a history than the present. I have enjoyed my experience here, and I know that an Oberlin degree will set me up for successes that I might not have been able to have otherwise. But when I applied to Oberlin, my mom was unemployed, my high school GPA had suffered since transferring to a more challenging school, and I probably didn't have the scores or educational background of a typical Oberlin College student. In short, admissions/financial aid probably thought I was a risk. However, after a bumpy start academically, I was able to adapt and thrive here.

I want the same for others.

As I write this it's spring break and I'm watching March Madness. This is weird because I'm watching a lot of players that I played with or against in high school as we all chased our dreams of playing college ball. They're playing on the biggest stage on the biggest TV networks (and not receiving any of the billion-plus dollars they're generating while they miss weeks of classes). These guys are living the dreams we all had growing up. I just hope that they're having some of the off-the-court college experiences that I've been able to have. Research and anecdotes show that many players at this level are likely not receiving meaningful educations or occupational preparation/guidance and will end up leaving school feeling like "used goods"--often without a degree. With graduation approaching, I want to help change this narrative. I'm still in the process of this research at Oberlin, but I cannot say the same narrative is true here. As I retire from competitive sports, I know I am also ready for life outside of playing ball, but that isn't the case for all athletes, especially at the highest levels. America loves its sports--we have a responsibility to make sure this relationship is ethical, especially when dealing with minoritized communities.

Wow - sorry I missed this last year when it was published. What a poignant and insightful article Zach. As the father of Josh Friedkin, one of your teammates (freshman point guard) during your final season...I can honestly say that despite the painful won-loss record...(which yes - stung even more because so many of those games were there for the taking)...it was always great comfort to know that my son was learning the ropes and being mentored by such a high character group of seniors like yourself, Jack, Nate, Scott, etc. Josh learned more about winning from that losing season than he could have if the team was at the top of the NCAC. Now, playing in his junior year, the Yeomen are one win away from setting the all-time school record of NCAC conference wins with three games left. And there is no question in my mind, that you and the other seniors from that team have a lot to do with the success the current squad is experiencing. Keep up the great work, Zack. Your record in life is going to be a hell of a lot better than it was your senior season.