As boring as this may seem, I have lived on the same floor of the same building since my freshman year, and in the same room for the last two years. I got into Harkness co-op the summer before my freshman year and have stayed loyal to the Harkness flag ever since. This year, I think I am the oldest and most experienced veteran Harkness resident. Just call me Auntie Harkness.

OSCA (Oberlin Student Cooperative Association) provides at-cost housing and dining for 630 students every year, as well as delicious food and fabulous community. To remain co-op savvy for so long, you must abide by some rules that make the cooperative experience even better. To participate in one of the nine dining experiences, students contribute between four and five hours a week to clean, cook, and perform administrative tasks to help the individual co-op and umbrella organization OSCA function. Co-op housing is available in four buildings that are rented from the college, so the buildings are similar to many campus dorms, but with a few distinct differences.

The most significant difference is decreased price, which can happen due to the self-sufficient and personal investment of the co-op residents, who pitch in an allotted amount of time every week to clean the co-op, from scrubbing toilets and showers, to mopping and vacuuming the floors and stairwells, in a labor of love we christened with the name of house jobs.

"Why would I pay to live in a place where I have to scrub my own toilets?" you may say. You would be silly to ask that question in the real world. OSCA provides you with the opportunity to become really good at it before you have your own apartment.

My freshman year, my friend Heather calculated the amount of money she was saving by doing her co-op hours, and figured out that she was better paid than a minimum wage job (almost $12 an hour). And all for a half hour of work a week.

Last year, when I washed the second floor showers weekly, I had a certain sense of pride that can only come from reaping the benefits of your hard work. The shower is only as clean as you make it, but if you're showering in it, gosh darn it, you want it clean. I would put on a bathing suit (early in the semester I did, but then discarded it. I took a shower at the end of the job to congratulate myself anyways, and it was only an impediment at the end) and scrub from top to bottom, turning on every showerhead in the locker-room style shower that Harkness possesses to wash away all the soap.

This semester, my house job is to sweep and mop the north stairwell of Harkness. Especially in the winter months, the corners of the stairs collect lint and fuzz and the steps can quickly become dirty from the mud, snow, and salt tracked in by residents and visitors. I put on an energetic playlist on my iPod and make my way from the 3rd floor to the basement with a broom, and then in reverse with a mop. In addition to a sparkling staircase, sweeping and mopping really work your abdominal muscles, so it's a pretty gratifying workout.

Everyone has to contribute to the house's cleanliness, but everyone enjoys the benefits. However, as the semester goes on and people start to get busier, folks sometimes forget about their house job. As a former Cleanliness Coordinator (an appointed member of the house who makes sure residents have house jobs and the necessary cleaning supplies, does random inspections, and accompanies the OSCA housing coordinator on weekly house cleanliness tours), it was difficult to remind people every week to do their jobs. Although my parents may disagree, you can only nag someone so much.

This year, the Cleanliness Coordinators have placed reminders around the house, in the clever artistic form of humorous posters that emulate war propaganda images (as well as some more recent political emulations). It's a friendly funny way to remember a necessary part of cooperative cohabitation.

I've added some photos of the cleanliness boards and some of my favorite posters for your viewing enjoyment. 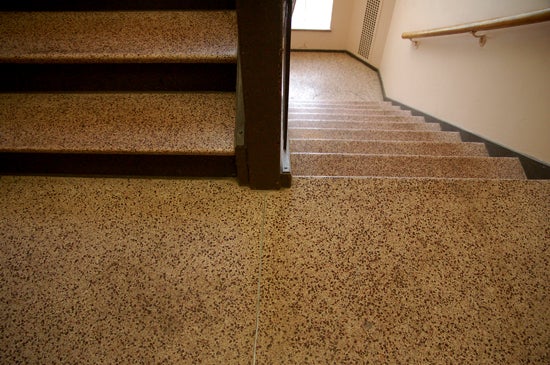 My stairwell. I make it sparkle! 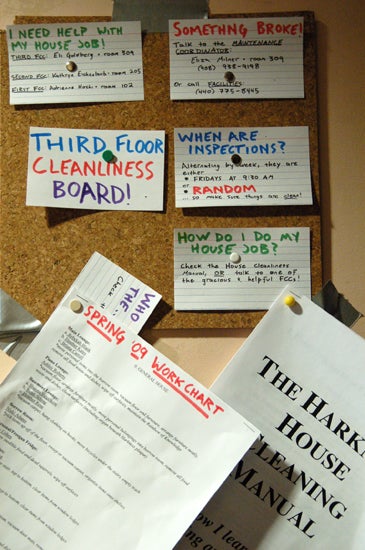 Everything you need to know about Harkness cleanliness. 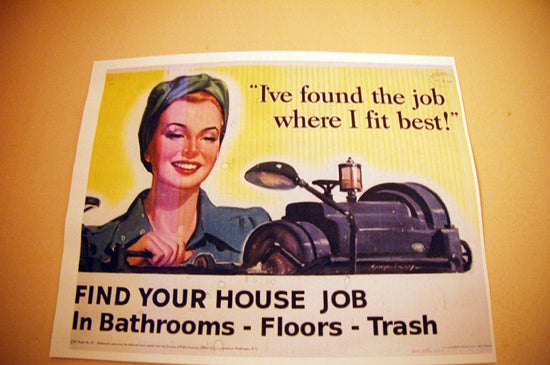 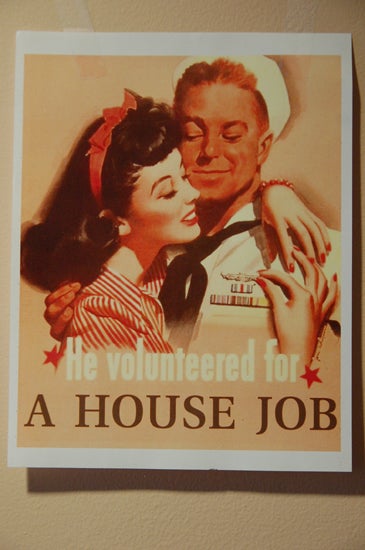 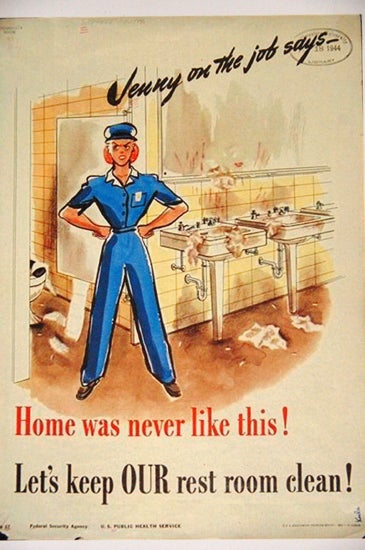 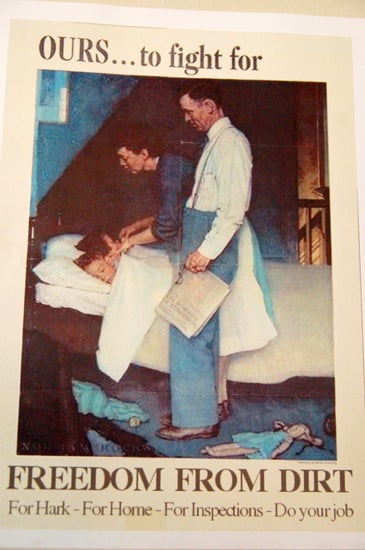 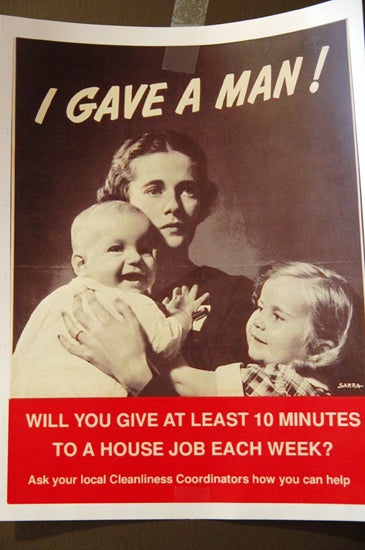 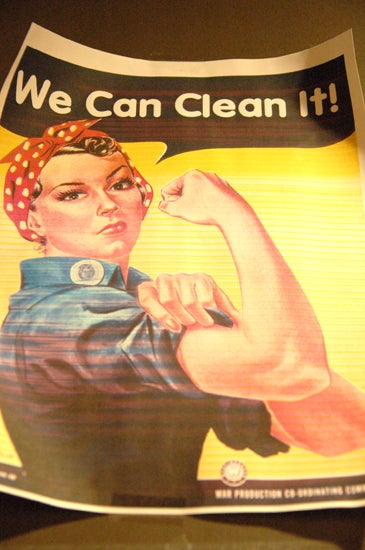 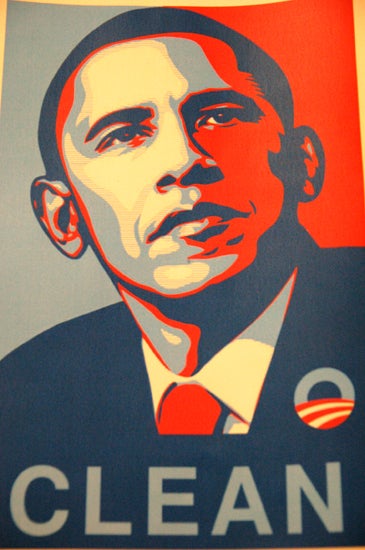 Ma'ayan, you'll be the Harkness matriarch! Your vote is worth twice as much. You just have to get off your rocking chair, put down the tabbaccy pipe and tell your side.

The propaganda posters are the best thing about Hark this year, hands down.

hey! thanks for the cool post. I am Mandy, an entering freshman. I am reading and researching all of the dorm possibilities. :)

Is Hark really as crazy as oberwiki makes it out to be? How do the showers work? ("E" system, right?) What other co-ops would you suggest?

I never read the Harkness Oberwiki page (even though I have a photo on there...) but for the most part, those things are true, but have not necessarily been the case in the last few years. We've mellowed out a whole bunch, but we're crazy tofu-eating vegetarians.

The house isn't spotless, but it is livable (the quote from the Oberwiki is that it's as clean as you can expect 100 college students to make it). Your room is as clean as you'd like. The food is tasty and it's really pleasant to live in the same place you eat (when it's cold, you'll be even more thankful).

In terms of showers, the E system is awesome, and most other dorms, even if they don't have group showers, is implemented as well.

Harkness is really great, however, I have mixed feelings about living here for one's first year. It's instant community, but unless you make friends easily and on other parts of campus, you could very easily never ever leave Harkness. Not that the folks here aren't great, but there's a whole bunch of really cool stuff happening around campus too.

I've spent the last three years in Harkness and enjoyed it very much. I don't know how the other co-ops, in terms of living and dining, are, due to that, but what I can say in support of Harkness is its location is fabulous. You're on the middle of campus, three minutes from Mudd library, a minute and a half from King (where most humanities classes are held) and across the street from Dascomb, one of the first-year experience dorms.

If you have any more specific questions regarding OSCA, check out the Oberlin 2013 Facebook group; I'm almost positive there are representatives from all co-ops answering questions on there.