(Disclaimer: This post has been in the works for months, at this point. Much like Joe, I just got around to finishing my thoughts on the awesome matter that was Bill Cosby, Stevie Wonder and the opening of the amazing Kohl Building.)

I thought I had this once-in-a-lifetime experience the summer after my senior year. I got hooked up with a week-long catering gig for the wedding of a Fortune 500 hotshot (that's what I thought, at least. Now I know he's a brilliant man and philanthropist who helped my high school put in two computer labs and is close friends with my family) at his sprawling estate on the Big Island.

The whole week we were sweating our butts off in chef whites in the Hawaiian sun and in the garage we converted into three complete professional kitchens overnight. The only relief from the heat was when we were sent to get things from the refrigerated van outside or while we were elbow deep in dishes at an improvised sink.

Rumors were flying around in the air as thick as the heat, about what sort of famous wedding guests would be at this party... Steve Jobs? Bill Gates (who rented out the island of Lanai for his private wedding)? We also heard rumors of musical guests... Red Hot Chili Peppers? Sting? Mr. Wonder?

As soon as someone proposed Stevie as a possible musical guest, I did a big dance inside and a huge dance on the outside. I grew up listening to Songs in the Key of Life on 45s, and within the past few years of high school, had accumulated several more albums and memorized two dozen songs. The next few days of catering prep were gilded with the thoughts of possible Stevie Wonder.

The day before the big day, someone mentioned that the Red Hot Chili Peppers were in Australia finishing up a tour, and an obvious next plane jump would be to Hawaii. Groans in the catering staff rivaled the sounds of the sated guests at the rehearsal dinner. Please, oh, please, let it be Stevie!

Saturday morning, the big wedding day, one of the catering staff mentioned that his girlfriend was part of the wait staff working late into the night the day before, had heard the mic tests the night before, and was sufficiently happy with the results. He refused to tell us who it was... so we were pleasantly surprised, if not completely relieved, that after one verse of Ma Cherie Amour sung by an unknown backup singer, Stevie came out to replace him for the rest of the show.

As I stood, melting into my own sweat, knowing that every second I stood there meant a minute more I'd have to be in my whites cleaning in the kitchen, I didn't care. After standing star-struck for three songs, I was told to get back to work. I said that I would love to line run dishes from the serving table to the back kitchen area, so I'd at least be able to clean partially to live Stevie Wonder songs. Singing along with my favorite performer live while doing dishes: priceless. And I was being paid for this.

On Saturday, May 1st, I was prancing around to a live soundtrack of Stevie while doing my other passion, photography, for pay. What's Stevie like? Introspective, soft-spoken, and full of love. Favorite quote of the evening: "I must be a polygamist because tonight I feel like each one of you is my true love," a sentiment that's been reflected many times over in the past weeks (Yoko Ono visited with "I love you" flashlights this week). Even before Stevie played, there were stunning jazz ensembles of current students and alums, plus a performance by the Oberlin Jazz Ensemble (plus a string section). The anticipation between each section was palpable, excitement building with each round of applause. Between the final two sections, Finney was the quietest I've ever heard it. We're such a respectful crowd... until Stevie walked out and everyone went absolutely berserk. 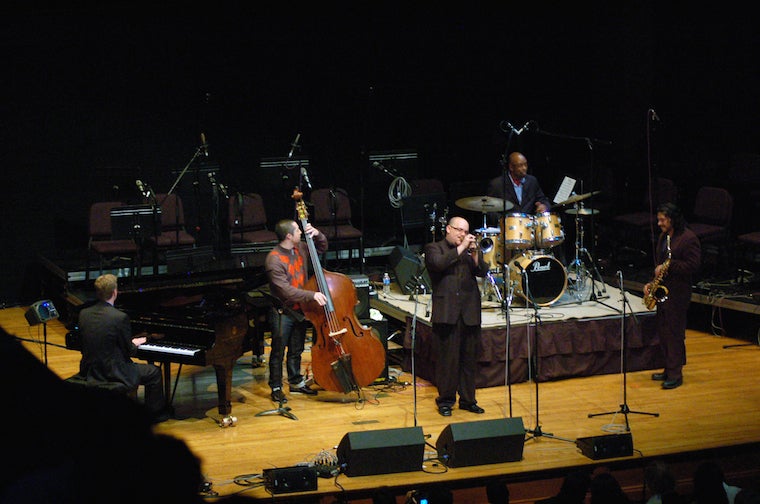 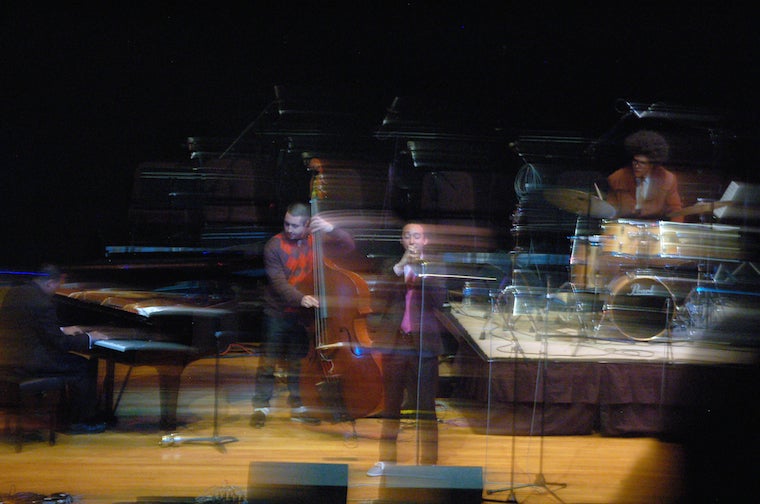 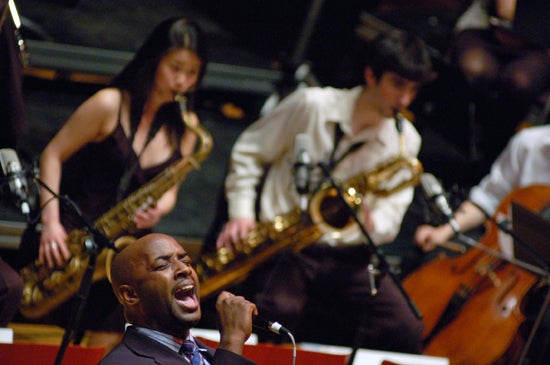 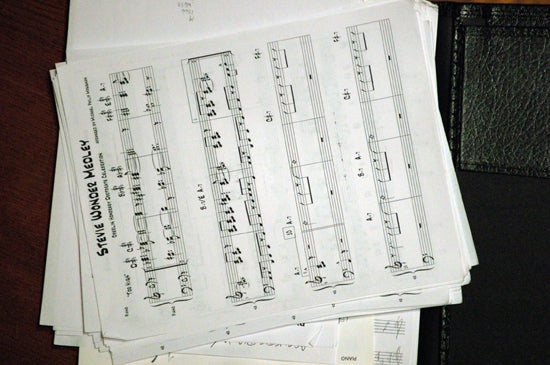 I love doing things I love to the sounds that I love. Circus overtook every waking hour of my weekend, and the hours that weren't circus that I should have been sleeping were Kohl Building opening related. I couldn't ask for anything more, though. Music plus circus plus photos times a thousand... this is my ideal weekend, albeit very rushed and crazy. Will took some pretty sweet photos during the preview, cause he's great and he's going to OWN that building next year. Shhh, don't tell, I'm not a con student, but I was told that my press pass was good as gold for the entire weekend. I just slipped in with the rest of the crowds during preview day. Absolutely stunning, this building. I really want to do a fashion shoot there at some point. 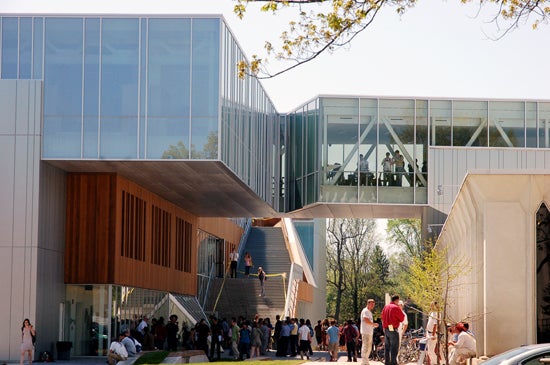 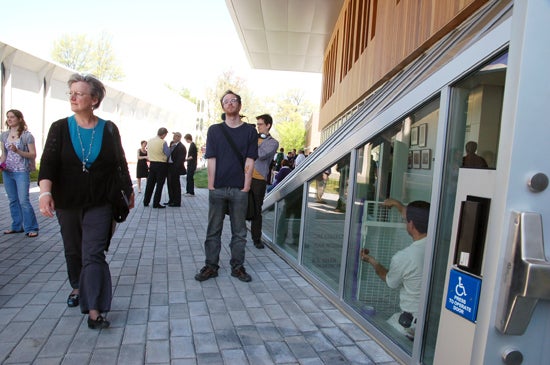 This photo of John is my favorite from the building opening. 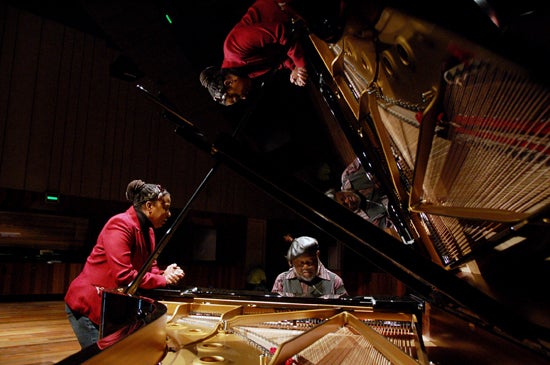 This is in the brand-spanking-new absolutely glorious recording studio. 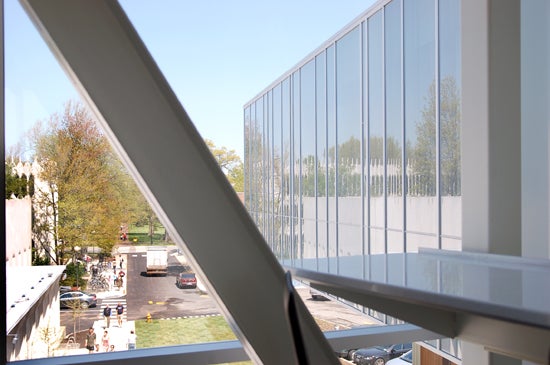 A view looking down from the Sky Bar, a student lounge with some great windows. 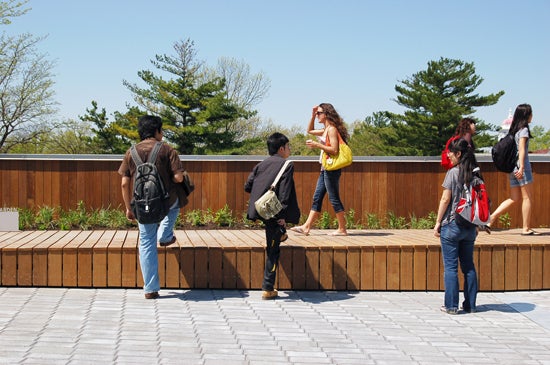 Students roam on the roof, accessible from both the building and from the ground, up three flights of outdoor steps. 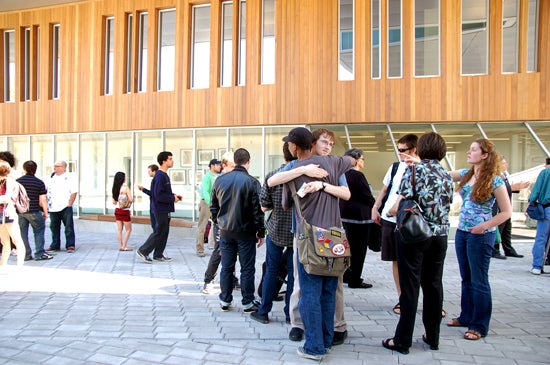 We've been waiting for this building for a while. Hurray! 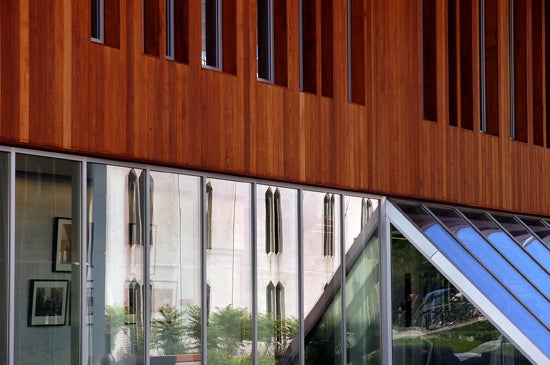 Old reflected in the new. What a gorgeous addition to campus.

So, Oberlin, you gave me Stevie Wonder again. But also Avery Brooks (again), Bill and Camille Cosby, and Yoko Ono, all within one week. Unless I become a paparazzi (I don't think I'm abrasive enough) or a photographer to the stars, this week will never happen again. Or maybe it will. Oberlin has proven me wrong before.

Ma'ayan, every time I read one of your posts, I wish I knew you!

I'd love to meet you, too. Why remain a mystery?

Ma'ayan, this is such a "WONDERful" article! I've been at Oberlin for nearly ten years now, and I am continually amazed and in wonder of (no pun intended!) what is presented here. I wasn't doing dishes when I heard Stevie Wonder for the first time live; I was in Finney with all of my favorite people (including you!). And it was everything I dreamed it would be. I first fell in love with Stevie Wonder when I was 12 years old -- in 1976. Ever since then, when I'm feeling down, I listen to some Stevie, and before I know it, I'm singing loudly (and off key, unfortunately) and dancing around the room. He's magic, simply magic. I had bought tickets to see Stevie at the Gund (now "the Q") in Cleveland in November of 2006. The show was cancelled and rescheduled for November of 2007. Then, it was cancelled again. I was devastated. I'm sure you can imagine how delighted I was when I found out that I had won a ticket to see Stevie in the student/faculty/staff lottery! Thank you for being there to take pictures so that all of us can keep those scenes fresh in our mind. I'm working on a scrapbook of that weekend. I'll have to show it to you when it's done! I hope all is going well since graduation. Take care and keep in touch!! All best, Kelly (Registrar's Office)

I'm still around in Oberlin for the next year, working in the Office of Communications. I would love to see the scrapbook (I have lots more images to share, if you'd like to see them, too)!