When I began this post, I was sitting in CLE waiting for my flight. Since then, I've flown home, driven from the Bay Area to Anaheim with the family, and braved the rain for some pre-Christmas Disneyland fun. Going to Disneyland has become somewhat of a pre-Christmas tradition for my family. I love it. In fact, I realized that I forgot to end my last blog post with a quote, so I'm opening this post with this quote:

"Here you leave today and visit the worlds of yesterday, tomorrow and fantasy." - Walt Disney

Okay, I just realized that that quote doesn't have an Oxford comma. That's obnoxious.

This quote has no relevance to this post. I'm just in the Disney spirit!

On yet another side note, the rain in southern California has been crazy. It's been so bad that Governor Schwarzenegger* has had to declare a state of emergency. So Disneyland fun times have been somewhat muted, but still totally worth the trip and the family bonding time.

Now, Helena should soon be blogging about Oberlin-themed carols that I wrote for the holidays, but I thought I would share my version of "Twas the Night Before Christmas." Oh, the things I will do to put off writing my papers.

The events referenced in this story actually happened, though I altered them slightly to make my life (and rhyming) a bit easier. Enjoy!

Twas the Week Before Finals

Twas the week before finals, when all through the school
students were studying, but procrastinating, too.
In Mudd many Obies wrote their papers with care
in hopes that the Beer Fairy soon would be there.

The students were armed with caffeine and snacks
lugging books, laptops, and notebooks in their backpacks.
Some took breaks to celebrate Hanukkah or Christmas
and many opted to celebrate the solstice.

In the commons of Mudd there arose such a clatter,
a planned flash mob let students forget what mattered.
And throughout Mudd sometime later that week
naked run happened, with students who aren't meek.

The moon on the breast of the new-fallen snow
gave the luster of midday to objects below.
When, what to my wondering eyes should appear,
a group of my friends to whom I am dear!

"It's Ellen and Colin and Ma'ayan and Brandi!
And Helena and Luke and Robin and Ali!
Let's go to my apartment, and let's not wait--
there are dozens of cookies that I have just baked!"

As freezing students in the cold do run,
when they feel wind from Lake Erie on their bums,
off to Firelands my friends dashed and ran,
for eating cookies and drinking cider was soon their plan.

We arrived in my apartment with Christmas lights twinkling
and with thoughts of warmth, my friends hadn't an inkling
of all of the goodies that I took time to prepare:
three types of cookies, fudge, and other snacks were there!

I entertained my guests, pouring mugs of hot chocolate
and, in retrospect, I should have taken some portraits.
We talked and we laughed and had all sorts of fun
and soon my friends declared that they were nearly done.

But cookies aplenty surely did remain
and I urged my friends not to be lame!
"Eat and be merry," I surely did announce
and hoped that they would eat every last ounce.

Throughout this whole time I was wearing a hat,
I was Patrick the Christmas Elf, and that was that.
My friends started joking and soon did acknowledge
that I looked as if Santa Claus were still in college!

My cheeks were quite rosy and I was quite merry
and my face, well, was bright red like a cherry.
And me, why, I had no thoughts of shame
for I'd gladly be merry for some of Santa's fame!

To the Feve we soon went, to round out the night
and once we were there, we saw quite a sight!
A cardboard cutout of Robert Pattinson was there,
a gift from a white elephant exchange, I swear!

I returned to my apartment, having had a good time
and knew that soon I would run out of rhymes.
I shouted as my friends disappeared from my sight
"Happy Christmas to all and to all a good night!" 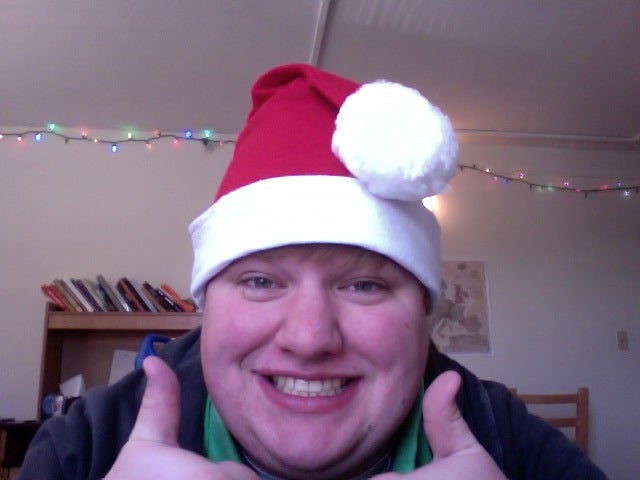 "Once again we find ourselves enmeshed in the Holiday Season, that very special time of year when we join with our loved ones in sharing centuries-old traditions such as trying to find a parking space at the mall. We traditionally do this in my family by driving around the parking lot until we see a shopper emerge from the mall, then we follow her, in very much the same spirit as the Three Wise Men, who 2,000 years ago followed a star, week after week, until it led them to a parking space." - Dave Barry

*Fun fact: Schwarzenegger is in Microsoft Word's dictionary. I did not expect that.

Wow. Just wow. A fabulous song to be enjoyed by all!

I might have taken... one group shot? And several of your cookies (which are a different kind of portrait altogether).