Oberlin attracts a disproportionately large number of the kids who were known in high school as overachievers. For better or for worse, I count myself in this group. We were the ones who joined every club, took every class, and pretty much never slept, and carried that habit with us into college. This is not a bad thing at all -- part of the reason Oberlin has such a vibrant campus culture is because of the sheer concentration of hypermotivated fools willing to direct an OCircus! show, captain an intramural softball team, and make tasty things for 100 people in their co-op each week, in addition to actually taking classes.1 You have to be passionate, motivated, and incredibly organized to pull that off -- and fortunately, many of us are. But we also tend to be busy to the extreme.

This fall, though, I think I've finally done it -- not an easy semester, but one that at least has some breathing room. Here's the obligatory Google Calendar screenshot:

That was my schedule this past week. Look at all that white space! White space means time to do homework, sleep, go to the gym, have tea with friends. Bliss.

And what are all the little colored blocks? Well...

Classes. They fill my brain with knowledge, fill my transcript with grades, and give me an excuse to stay at Oberlin a little longer. I was mildly horrified to get back to school and discover that I'm technically only six credits from graduating -- but they're six big credits. Classics 102 is the last requirement for my Greek major,2 a survey of Western comic literature from the Odyssey to Seinfeld taught by Zeus incarnate. I also have to complete a senior project for my Archaeology major, which in my case means an honors thesis; I'll be blogging about the honors process all year, so I'll spare you the gory details for now.

In addition to finishing my majors (!), I'm getting my Greek on in a 300-level course on Athenian legal speeches, and taking an environmental chemistry course that's filling me with fun facts about the ozone layer. Finally, although I swore in high school that I'd never take another P.E. class, I'm in Hatha Yoga -- an incredibly relaxing way to drag myself out of bed in the morning and do something physically engaging.

OSCA. I'm back in my beloved co-op for one more year of fine dining! I'm one of two seniors who've been members of Harkness all the way through college, which means I've finally attained "Grandpa" status. Being part of a co-op means work, of course: everyone is expected to chip in four or five hours a week to keep things running. For me, this involves both representing Hark on OSCA's Education Committee and acting as a Tasty Things Maker, with the simple mission of making a delicious thing for the co-op once a week. (As I write this post I'm sitting in the dining room waiting for this week's confection -- chocolate zucchini cake -- to come out of the oven.) But it also means fun: family-style meals every day, kitchen-cleaning dance parties, and scheming up special events like a Rocky Horror themed meal in November... 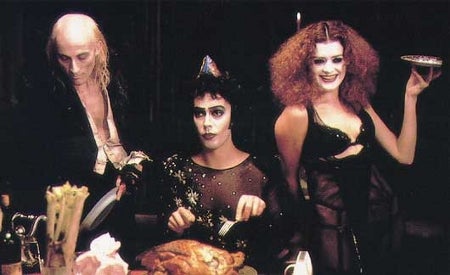 "Eddie? That's a rather tender subject..."

Classics Hall. My first two years at Oberlin, I ate and lived in Harkness. Since I got back from studying abroad, though, I've made my home on Classics Hall, a theme hall in South dedicated to ancient Greek and Roman culture. The existence of Classics Hall is a story in and of itself: for years it was the home of a committed group of Classics majors, fizzled out by the time I got to Oberlin, and languished in obscurity until its revival last year. Right now I'm the only declared Classics major living here -- and thus the de facto Latin translation-checker -- but it's exciting to live with students from several different departments who are all enthusiastic about Classics, and I haven't given up on recruiting some of the first-years! We have a mostly-friendly rivalry with Sci-Fi Hall, a theme hall on north campus, with whom we host events like Classic Doctor Who Night and plot against our mutual enemies, DIY Hall and Sustainability Hall...

Sex ed. This semester, for the first time, I'm working for two programs that promote sexual health on campus. Two evenings per week you can find me in the HIV Peer Testing office, performing free, anonymous oral HIV tests. After a week of intensive training and shadowing, on Thursday I got to give people their test results for the first time! I'm also a staffer at the Sexual Information Center, a student organization that provides comprehensive, sex-positive education and resources to Oberlin students: selling at-cost safer sex supplies, providing confidential peer counseling, teaching workshops and an ExCo, and giving people rides to local clinics. Right now, though, our number one project is putting together workshops for our (in)famous annual Safer Sex Week in October. Will I be blogging about it? You bet.

Work. As if all that stuff isn't enough, I've accumulated a collection of small but incredibly fun jobs on campus: tutoring students in Greek, giving tours for Admissions (If you visit Oberlin this semester, take the Monday 2:30 tour! We can hang out! It'll be fun!), and blogging, of course. Hey, gotta pay for my Agave burrito habit somehow...

So that's my life this semester. When it's all written down like this, it sounds like a lot to take on -- but believe it or not, compared to last semester this is positively relaxing. There's enough time to stay involved with everything I care about and still get eight hours of sleep, and I get to work with, live with, learn from, and cook for some of my favorite people in Oberlin. What more could I ask for at the start of my senior year?

Now, if you'll excuse me, my chocolate zucchini cake is done and it's time to feed the co-op! 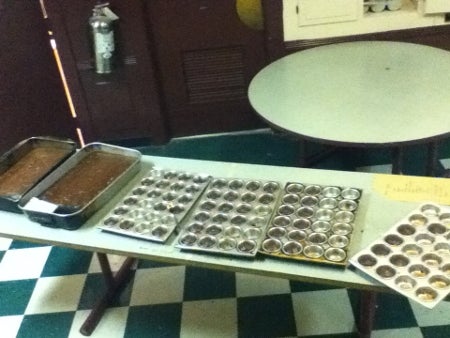 The result of my Friday night in the kitchen: two full cake pans and 96 cupcakes. This is what it takes to feed 109 Harkies!

1 Lest I be accused of exaggerating, this is actually a description of my roommate -- and I left out a few things...

2 Yes, I put off the intro course for my major until my senior year. No, I would not recommend doing this.

Eli, you are awesome, do amazing things, and write about them so engagingly. I hope there is some time in that busy schedule of yours for us to hang out this semester.

You know, if you had to leave one class for your senior year and you're already a classics major, TVN's class is waiting for. It's so fun.

However, if you're smart and take it earlier than your final year, you'll become a classics major more quickly. Or so I have been told.

Also, IRL Tetris is the best kind of Tetris.

I'm typing from the computer labs, during my high school French class..I really ought to be jotting down french past tense verbs, but instead i want to thank you for making Oberlin seem spectacular.

I know what I'm doing this weekend...

Speaking of more In Real Life Tetris, OSCA food unpacking was compared to Tetris in our discussions at Old B, since the food unpacker has to fit lots of boxes into the fridge. I thought it was amusing.

Ma'ayan: Yes! I think some of the undecided first-years in CLAS 102 are starting to see the light of the Classics department. It's a beautiful thing to watch.

Darlene: Oberlin IS spectacular -- and tasty :D If you come up with any awesome Rocky Horror themed foods, I want to hear about them! Our menu is still a work in progress (time wraps? Tim Curry?)

Nora: That's pretty much the perfect description of what unpackers do. Tetris analogies are so useful...

I saw the comments about real life tetris and this is all I could think of: