Most colleges give their students a choice between traditional housing and fraternities or sororities. Oberlin, being Oberlin, has a different--and much wider--array of choices. The most salient differences, perhaps, are that we don't have frats and we do have co-ops. This, however, fails to capture the range of on-campus living options.

There are three first-year-only dorms. One of them, Kahn, is new this year and very fancy. There's a quiet hall somewhere in East. There's substance-free housing (Barnard, where I lived last year). There's Baldwin Cottage, the women/transgender safe space. There's a hall just for transfer students. Then there are the culture- or language-themed halls: French House, Spanish House, Russian House, German House, Afrikan Heritage House, Asia House, Hebrew Heritage House, and Third World House ("for those who identify as a marginalized person including people of color, first generation college students, low income families, lesbian, gay, bisexual, queer, questioning and transgender students and allies of all these groups"). But even that list leaves out theme halls.

Case in point: the Science-Fiction and Fantasy Hall, more often referred to as Sci-Fi Hall, where I now live. 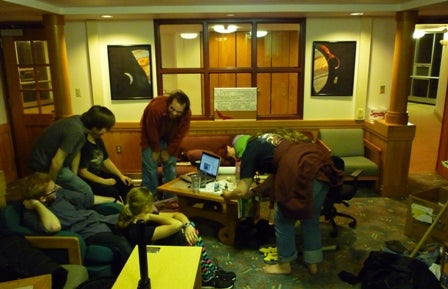 That is a picture of the SF Hall lounge. Note the space paintings on the wall and the people clustered around Ye Olde Computer Screen. Part of the reason I like living on Hall is the fact that there's a community there, people always in the lounge for me to hang out with. As an introvert, I appreciate that there are people around to interact with easily if I so choose. Otherwise, I'd be spending far too much time in my room on my computer. --Like I am now. --Hold on, please, while I relocate to the lounge.

Okay, much better. This is my view now: 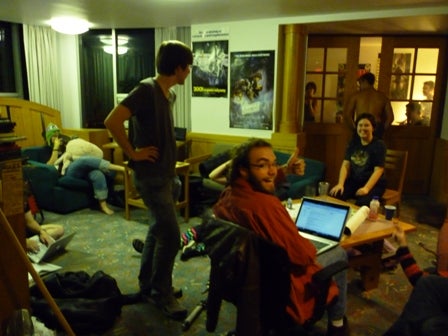 It's the other side of the lounge! Actually, it's a lot quieter now than it was when I took that picture, because it's Sunday night and most people are doing homework. There is activity in the little TV nook, though--people playing video games--and there are a few people reading.

You see, the lounge has a library. People put their books out here (after writing their names in them somewhere) and everyone may browse at their leisure. The only rule is that books may not leave the lounge. 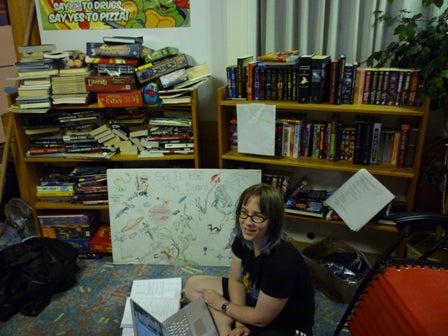 It's mostly science fiction and fantasy, of course, but there's quite a variety within that general heading. We have all of Neil Gaiman's Sandman, the Abhorsen trilogy, a few Heinlein titles, two copies of Dune, Scott Pilgrim, The Silmarillion, some Terry Pratchett, Arthur C. Clarke, Douglas Adams, the Bartimaeus trilogy, Watchmen, lots of things I don't recognize, I am America (And So Can You), World War Z, oooh--something that says Bradbury on it! I should go read that... 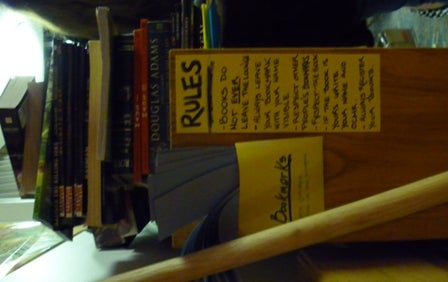 Anyway, it's a wonderful resource for the nerdly-minded. I've contributed a few titles to the general betterment of humanity myself. However, I haven't yet been using the library, or indeed the lounge, as much as I'd hoped. I've been busy: settling in, getting sick, then dropping a class and catching up in another. Hopefully, I will get things well under control in the next week or so, and can start hanging out with more people and taking action on the already-overwhelming list of books, movies, and TV shows they've been recommending!

One thing I have done, though, is participate in a raid on Oberlin's other themed hall: Classics Hall. They're new; apparently, Oberlin used to have a Classics Hall, but then they didn't for a while, and then last year all the classics people put down Catullus, put on their togas, and Socratically organized a home for themselves. Or so I like to picture it.

Anyway, the already-established Sci-Fi community decided that the two theme halls must have a rivalry. We live in North; they live in South. The obvious way to commence hostilities--or perhaps hilarities--was to march across campus in post-Apocalyptic biker gang attire and attack/raid their lounge just before their Movie Night started.

Emma and I had lots of fun getting ready. Think of any movie you've seen, or book that you've read, in which two roommates are busily primping on a Friday night, giving each other advice about what to wear and how their hair should look. Now just replace your mental soundtrack with "Do short leggings look more kick-ass than long ones?" and "Okay, I think I'll sacrifice the shirt. Can you help me rip this sleeve?" 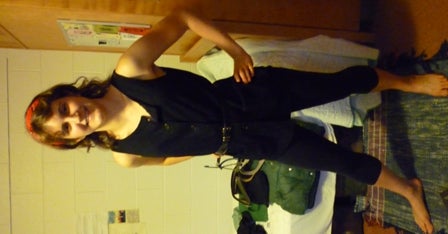 Once that was done, we gathered in the lounge to distribute weapons.

Then we proceeded to Starlight Lounge, the big lounge, for a proper group photograph. Don't we look sexy? And dangerous? And really, really goofy?

We marched across campus in a raggedy band, singing "The Imperial March" as we went, attracting puzzled stares and fascinated looks. When Mike, our Fearless Leader (in the long beige coat with the giant bazooka-like device), raised his fist, we all shouted together. Every now and then, someone would holler that "Owks is good for foightin' and wimmin!" I am sure we were an intimidating sight.

We made it into South, and up the flights of stairs to the third floor, past the startled inhabitants who were trying to leave their rooms, and into the Classics Hall lounge, exactly five minutes before their movie night should have started.

There was no one there.

We milled about in uncertainty in the narrow hallways for a few minutes (and if you think it's easy for a few dozen epically-dressed, heavily nerf-armed people to mill around in a long, narrow space, you should try it sometime). They had tricked us! Or we'd gotten the time wrong. Something. No one was really sure what to do--until there was a challenge from the head of the stairs.

Long story short, we had a parley with a representative of the Classics Hall and agreed to meet at some to-be-determined time to make cookies together. Then we rambled back to North via an Anime Club meeting and changed out of our very hot clothes. (Trenchcoats, wool, and giant boots aren't too comfy in 80-degree weather.) The lounge was very loud and excited that evening. 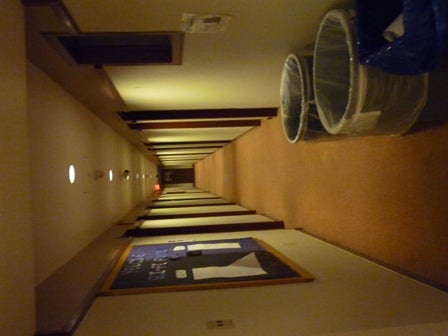 Emma and I live down this wing of Sci-Fi Hall. There's another, identical wing that's also part of Sci-Fi Hall: it covers the entire north side of the second floor of North.

When we're not in the lounge, Emma and I are in our room. It's a divided double, meaning it's actually two rooms, with a door between them. I have the outer room; she has the inner one. 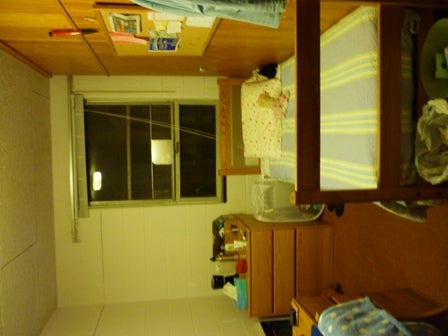 The desk has a built-in bookshelf. I didn't break it with a zillion books this year! I am proud of my self-restraint. The library has something to do with this. 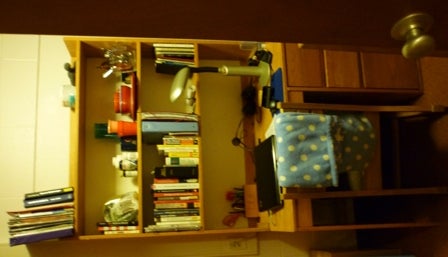 Emma and I are very good friends. We get along wonderfully. 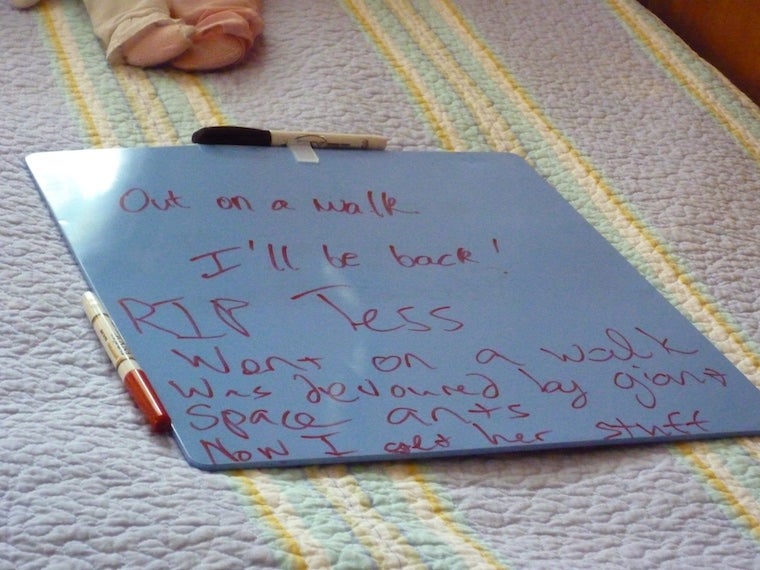 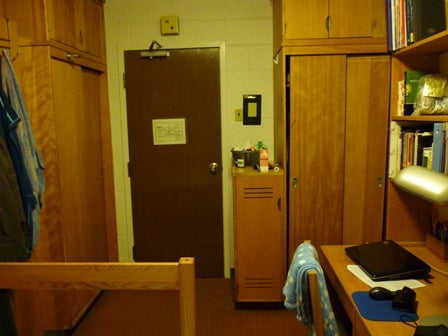 This does not follow naturally anywhere, but I took the photo, so I want to tell you about it: Sci-Fi lounge also has a kitchen. Unlike Barnard's last year, this one gets used—heavily. People contribute dishes and tea to it, much like the library. Everyone cleans it, and the lounge, once a week. It's cool. 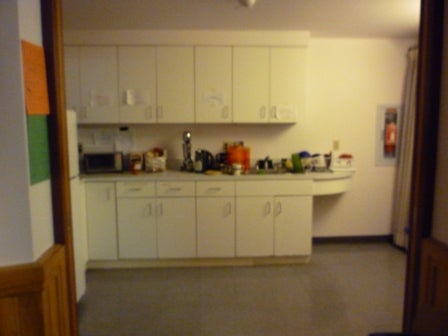 So that's Hall. I am sure many of my further posts will have something to do with Hall, the quirky people here, and the crazy things we do. (I also do lots of things with my friends from last year at Barnard, but so far they have not resulted in pictures of post-Apocalyptic bikers—just discussions of snake sex, which are not quite as bloggable.)

The problem, oh futuristic now-allies, was that you came to invade five minutes *before* the movie night was to start. We didn't even find the person who was supposed to have the movies until a good five minutes after the theoretical start time.

wait is Barrows not a freshman dorm anymore?

Tess, are you really sure that those looks were "fascinated" and not "horrified"?

I actually don't know Barrows' status this year. I know there was some talk about making either it or Dascomb all-year dorms because of the new Kahn building, but I'm not sure if that ever came to anything.

There are three first-year dorms, including Barrows.

Do we really have a Classics Hall now? Not that I have intentions of joining. Just amused/curious.

Yes, we totally have a Classics Hall now. We're on the 3rd floor of South. Stop by sometime!

Happy to see that sci-fi hall is alive and kicking, as I know some people who lived there when sci-fi hall first came into being! Is it no longer in Barnard?

I don't know that Sci-Fi Hall was ever in Barnard--I only know Barnard as substance-free housing. I know SF Hall used to be on the 4th floor of Noah, but then it got too big and moved to where it is now.

Are there any Doctor Who fans in this hall? :)
This looks amazing.

SO MANY DR. WHO FANS. They're getting to me, too--I just saw two episodes of David Tennant's Doctor. *swoon* --Er. Ahem. Yes indeed there are. I recently witnessed a prank in which someone's door was covered with pictures of the Weeping Angels.

Hall *is* amazing, and incredibly welcoming. You should come visit! (And e-mail me if you have any other questions--just click my name on this comment.)