Recently my life has seemed like a dry run for graduation. I'm not a senior but many of my friends are, and I spent all of last week helping them pack and bouncing around to all the different Commencement events. I've also been saying my own goodbyes to Oberlin: I'm studying abroad next fall and won't be back until February. Perhaps the hardest thing has been leaving Harkness, the co-op where I've lived since my freshman year. When I come back next spring I'll be living somewhere else; it has been amazing to realize, as I prepare to move out, how much Hark has defined my experience at Oberlin. So - to alleviate my own nostalgia, as well as give some info to folks who are filling out their housing forms - here's a little bit about Harkness. 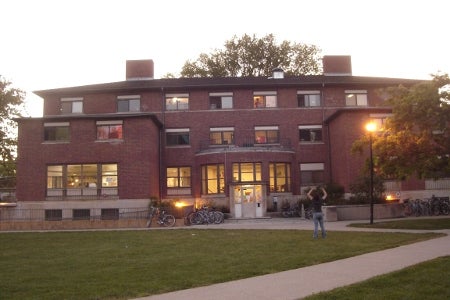 Harkness: the building, the co-op, the legend.

When I was a wee young prospie, someone told me that Harkness is to Oberlin as Oberlin is to the rest of the world. People look at it strangely; it's got a reputation. Calling someone a Harkie means that they are a dirty hippie, probably barefoot, probably unwashed. The quintessential Harkie wears clothes salvaged from the Free Store, eats freegan, and spends school breaks chained to a bulldozer protesting the environmental impact of coal mining. 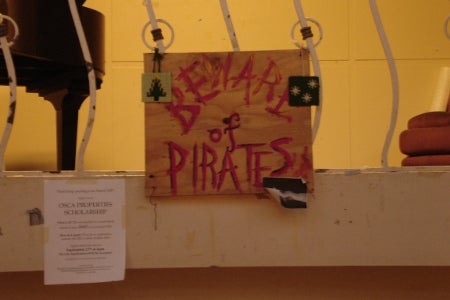 Like any stereotype, this has more than a grain of truth, but it's also playfully exaggerated by members of the co-op. We like to perpetuate our own infamy, and self-created legends about the house are abundant (did you know Mark Hamill was conceived in the southwest corner of the dining room?). But the truth is that all sorts of people live in Harkness. The only thing we all have in common is a high degree of tolerance, an appreciation for absurdity, and an understated yet profound geeky streak. 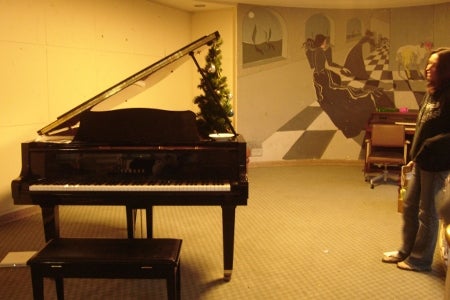 Our beloved baby grand, the hub of spontaneous jazz sessions and midnight jazz.

As an incoming first-year, Hark was my last choice. My desire to live in a co-op just barely outweighed my desire to avoid the unsavory reputation of Harkness. The co-op housing lottery is random, though - and guess where I ended up. What I've discovered since then is that Harkness is an enormous puppy, and however sloppy and nippy it may seem, it's only because it's so eager to romp and play. Hark's rambunctiousness can be overwhelming, but it has a knack for working its way into your heart. 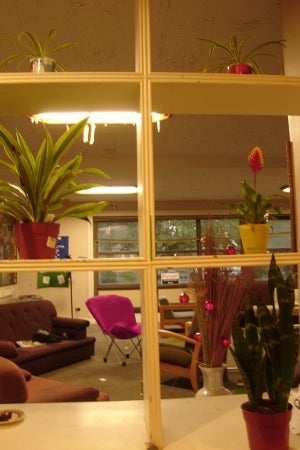 Non-voting members of the co-op: our lounge holds two dozen plants, each named.

With 64 residents, Harkness is Oberlin's largest housing co-op. At mealtimes, another 40 or so pile into the basement or circle up in the grassy bowl outside to bask in the sun. The food is always vegetarian, and usually also vegan, ambitious and delicious. On good days there might be fresh bread and decadent granola, hand-tossed pizza with gourmet toppings, gluten-free chocolate cake with an orange glaze, or homemade spicy guacamole. (On bad days, and there are a few, it's underseasoned kale, quinoa, and lentils, and a mob of Harkies troops down the street to get burritos at Agave.) 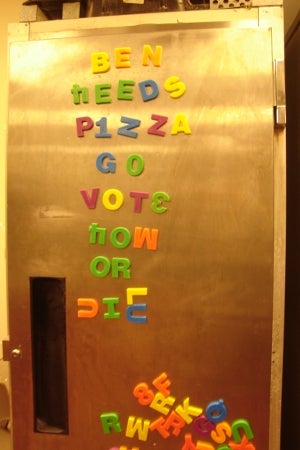 Our weekly pizza night is legendary, so the election of pizza cooks is a very serious affair.

Hark is famous for weekly "loud hours" when people make as much noise as possible; for its ass-kicking intramural soccer team, the Hark Ness Monsters; for banjo and didgeridoo and electric organ jam sessions. It's also famous for passionate, intense discussions that can stretch on for days, covering every aspect of the co-op's operations. As with any place where a hundred college students eat, work, and live together day in and day out, it can get infuriating. 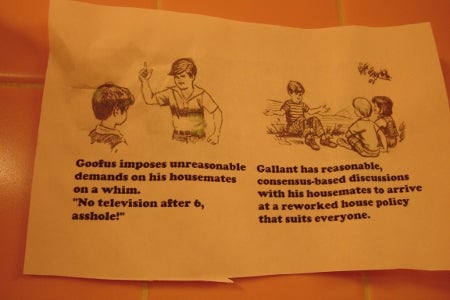 But Harkness takes care of its own. When I stagger home from the library late at night, the lounge is full of people cuddling and reading stories, someone's playing jazz on the piano, and there are cookies fresh out of the oven. When I'm sleepless at four in the morning, there are fellow insomniacs lying in the grass outside, gazing at the stars. Even alumni, prospies, and open-minded guests are always welcome. 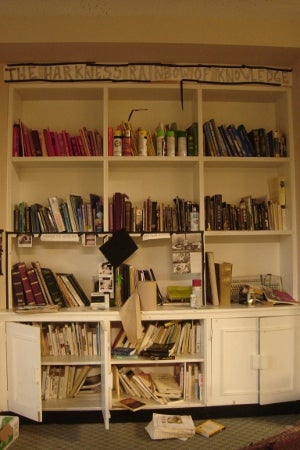 The Rainbow of Knowledge: fine literature with an unconventional organizational scheme.

I was sitting in the lounge during Reunion when a Harkie from thirty years ago burst in. His voice was shaking; he could not tell his stories quickly enough. Over and over he exclaimed, "The co-op looks exactly the same. The students look exactly the same. Oh, it's so good to be here!" You can leave Harkness, but you're always a Harkie... and the house will always be there, waiting for you to come back. 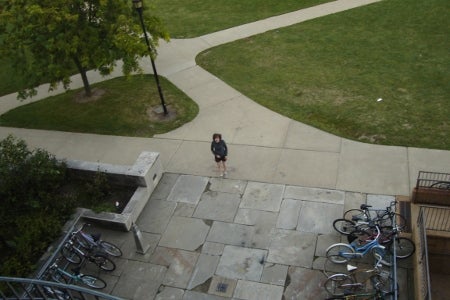 If you want more Harkness, check out Ma'ayan's posts about the flavor-tripping special meal and keeping the house clean. And thanks to Neva, Spike, Jane, and Ryn, the wonderful Harkies who helped me write this post!

Yeah, it's Abby! That's the view from my window freshman year -- I could say hi to everyone coming into the building :)

Did you have the room Cocks was in this year? And I mean, I had a similar view on the third floor, but I didn't use it just to say hi to people so much as to yell at them or to hold full-blown conversations.

I was in 309 -- one floor up from Cocks' room. We could have rappelled down onto the balcony.

Oh, Harkness! Harklove forever. I can't wait to come back in thirty yeras like that alum and have the same reaction.

@Matt awwww. Hopefully in thirty years we can be crazy old alums together.

Eli, I didn't get to say goodbye to you before you left, but no worries, I'll see you spring semester for sure!

This post is so spot-on. Though I'm not a Harkie, there's never been a place where I felt so welcome.

And this is so true:
"What I've discovered since then is that Harkness is an enormous puppy, and however sloppy and nippy it may seem, it's only because it's so eager to romp and play. Hark's rambunctiousness can be overwhelming, but it has a knack for working its way into your heart."

y'all might be interested to read a history of Harkness compiled by Hannah Hoose. this version was sent to the house late in 2005 http://docs.google.com/View?id=ddd3mwtb_24cgpmqhgs

Spot-on indeed! I lived in Harkness a little over ten years ago -- in room 309, actually -- and this gem of a sentence made me incredibly nostalgic:

"When I stagger home from the library late at night, the lounge is full of people cuddling and reading stories, someone's playing jazz on the piano, and there are cookies fresh out of the oven."

That's Harkness in a nutshell. Not just the easy good times, but how good those times feel when you come home feeling tired or irritable.

I stopped in the Harkness lounge during reunion weekend this year, too; sorry I missed meeting you!

I'm living in Harkness next year (room 303) and I'm wondering what the view is from the windows and just in general how it is as a room.

I'm also excited to live there!

@Aaron Yay, welcome to Hark! Let's see... 303 is between the stairwell and the laundry room -- a good spot for drop-in visitors if you leave your door open. The room is pretty average-sized. If you're standing in the doorway looking in, there's a window on the back wall, and a built-in closet-dresser-mirror-shelving complex that takes up most of the left-hand wall. (It's the same furniture unit that's in every other Oberlin dorm room ever, if you had a chance to do an overnight visit.)

There's a big shady tree and a clothesline right outside the window, and you might be able to see the Environmental Studies compost bins and herb garden. It's also right over the driveway / delivery area, so you'll be the first to know when the garbage trucks come in the morning (they are kind of loud) and when food deliveries come in (snacktime!)

I'll be abroad this fall, but I'm hoping to eat in Harkness in the spring -- can't wait to meet you!

. . . . this article made me so incredibly, indescribably happy. So good to see the pictures too. . . especially the view from 309. And it's awesome to know that the plants are still there! I believe that you (Eli), Eliza, Gary and I biked those back to the co-op?

It's so great to see current students and alumni share their love for such a magical entity. "You can leave Harkness, but you're always a Harkie. . . "

Awwww, thanks, Riordan! Picking out the photos for this post brought back so many memories. Can't wait to have you back in the fall :D