One of the reasons I originally chose Oberlin was because I knew there would be opportunities to dance in the way I most loved— off-guard, spontaneously, with movements generated from a deep place within me in response to the world around me. Now that I'm a second-year at Oberlin, I've gotten to take two classes in this beautiful little thing called dance improvisation. The dance department covers a lot of ground through physical techniques, critical inquiry courses, opportunities to choreograph and perform, and somatics courses. The dance class I just finished was called Improvisation in Dance and Mind, and it focused on improvised movement as a way to open up our senses, get in touch with our animal instincts, work outside of assumption, and get comfortable being disoriented. At least, that's what I got from it. I found the class to be thoroughly transformative and a refuge from the isolation of the pandemic. Because the studio of Warner Main is huge, and because there were only eight students, we were able to hold class in person for two hours twice a week. I'm back home in Brooklyn now, and the class has been over for weeks, but I'm still sitting with the set of insights that came through while working with a friend on our final project.

My friend Emmacate and I share a love language in physical touch, and the isolation of the pandemic left us wondering how we could still share physical experiences that made us feel close to other people. Our final project assignment for Improvisation in Dance and Mind was very open-ended, and one of few requirements it had to fulfill was to end in a filmed score: an improvised movement sequence that takes place within some pre-set constraints, or with a pre-set prompt to inspire movement. When it came time to craft our projects, Emmacate and I started out with the question, "How can we form emotional connections physically, even without physical touch?"

We already had some frameworks for thinking about our project from the exercises, activities, and conversations we'd had in class. For starters, we knew that strong connections in dance improvisation often come from what our professor, Ann Cooper Albright, calls the "third mind" place: the state of being so in tune with someone else that there can be some synchronicity or other form of unity without there being a clear leader or follower, as if two people dancing together had a third mind between them. Emmacate and I speculated together that sometimes this seems to come not only from a deep attention paid to the other person's dancing through peripheral sight, sound and touch, but also that sometimes dancers seem to be tapped into a collective consciousness that guides them to a more unified state. Our research component of the project focused on the idea of "ether," an atmosphere of collective consciousness that Emmacate defines in a recorded conversation as "the 'air between' of thought and idea dropping into the improviser, who is gaining information from the people in the room, who have emotions, thoughts, ideas, and entities attached to them that float in the spaces between everyone."

Another relevant phrase that our professor had introduced to us was "middle voice." Ann Cooper Albright describes that although in English, we use only active and passive voices ("I moved through the space vs. I was moved through the space"), many languages use a middle voice to describe an action that comes from more than one source. In our dance improv class, "middle voice" meant a sort of in-the-zone state, allowing movement to come through you rather than worrying about what you're going to do next. It's the willingness to synthesize what already is— the constant motion within and around your body— with a bit of your own directive, but without losing sight of or judging what is naturally unfolding.

Our research process was unconventional, to say the least, and allowed us to learn as much from somatic experience as from others' thinking. We began by improvising together for just over five minutes in a cozy old empty library space in German House. When we were done, we recorded our voices talking about what the experience had been like, especially as it related to a "third mind," what enabled us to work as if we had one and what didn't. Next, we did a close reading of an essay we had read for class earlier in the semester called "Dance: A Body with a Mind of Its Own" by Ruth Zaporah. We selected quotes from the essay that resonated with the concepts of "third mind," "middle voice," and ether, then read them aloud, again into my voice memo app. Days later, in a sun-filled studio on a crisp Friday morning, we played back this voice memo as we warmed up our bodies for our final score. Warming up while taking in the ideas in the essay set us up for the score— it felt like our purpose was already in our bodies.

Our final score was essentially to respond to both the sound score and one another, exploring how we could form a physical connection without touching. Because we couldn't hear the words in the sound score very clearly once it got started, we ended up not intentionally responding to it very often, which seems a bit remarkable watching the video. There are so many points when our movements in some way converge with the sound score, even when we have no recollection of noticing what was being said, that we can only speculate on how many times we took in the recording on a subconscious level, bypassing it only from the parts of our minds disconnected from ether and from the space. There were also lots of points throughout the score when we made a similar decision at the same time unknowingly, or when our movement qualities seemed to converge even if the movements themselves were not the same, or when our dancing seemed to be in conversation or holding a gooey energetic substance between us.

Emmacate and I spent a while trying to think of a phrase to describe this state. I floated "expanded touch" because of the ways that we envisioned energy radiating off our bodies to bring us into a sense very similar to touch, as if it was touch itself that could be expanded off of our skin and into the air. Together we also came up with the phrase "relational proprioception": the awareness of where our own bodies, as well as someone else's, are in space. Through a practice in an expanded awareness of our own bodies and one another's, we were able to come to a place of physical alignment in which, had we been physically touching, it may not have been much different at all. 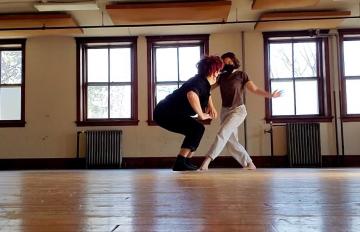 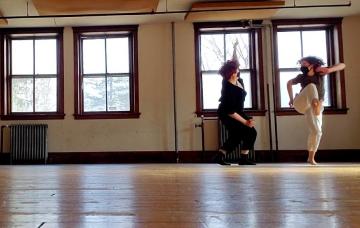 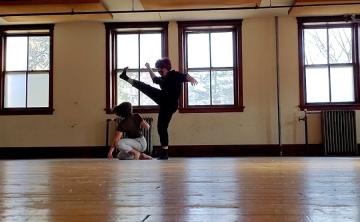 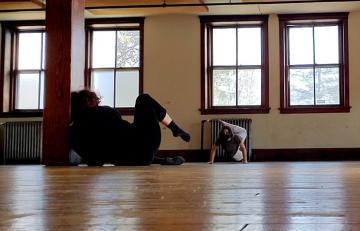