I actually meant to talk about fall break (see next entry). But because I owe you guys the main body of the talk ---
(enjoy!) 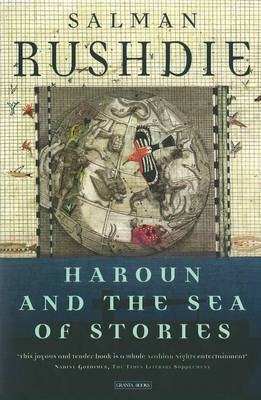 This is for a certain person who might kill me for blogging about Rushdie without mentioning Haroun. 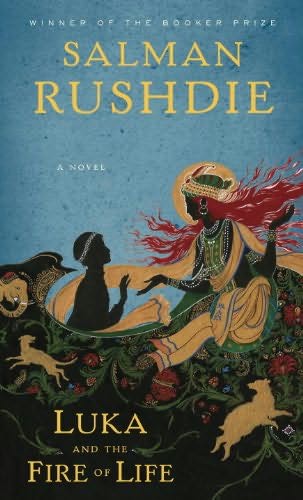 on the lions of Nottingham Public Library: "legend has it that when a virgin walks between them, the lions will roar. Tells you a lot about the state of literature in Nottingham."

re: Paris Hilton - "it was amazing really, the transformation of a second-rate hotel into a third-rate human being."
{Oh snap! Or something to that effect... By the way, I never say that. Slang sounds unnatural coming from me, and I can only assume it makes other people as uncomfortable as if their parents had just walked up to them and said, "Lol jk."}

"because when power is not scrutinized and watched, it begins to misbehave"

"perhaps there is room for literature, for writers to fill in this gap in news left either by poverty or by negligence [of traditional means of obtaining news]. Literature is the ability to give a lived experience of people in other parts of the world, the lived experience of these countries, to talk about that clash between politics and the individual, between artist and politicians. This may come as a shock to some of the young people in the room, but politicians don't always tell the truth. You are young, and idealistic, and I'm sorry to bring you to bad news. Writers also, you know, make shit up. But on the first page they write, 'a novel', and it follows that everything after is fiction."

"in this interesting era of dictator eradication, this seems to be a service I can perform. May I just mention that in my quarrel with Ayatollah Khomeini, one of us is dead. [illegible] sued over Midnight's Children [for unsavory portrayal of a character purportedly based on her], and she was murdered by her security guard; and after [illegible] banned Shame in Pakistan, he [died somehow; my notes trailed off here]."

"but for the world, America means America as a superpower. In this era of American hegemony, so few writers deal with the colossal power of America. Why is it that American writers have abdicated this responsibility? [...] But now, I tend to agree; you can't dictate [that they must write about this]. Some writers have very private inspirations; they're not meant to write about the public scale"
{This is true, and I think Rushdie only circled around the answer in his remark; maybe it's simply that American writers take American hegemony for granted (similar to the way Western culture is invisible, whereas the culturally visible countries or places are often cast as primitive, "developing"). That, and the subject itself is huge and unwieldy. But I would love to read something that deals with this, from a non-American perspective especially. It's interesting to ask who, in the world, has the power to give voice and testament.}

"[the novel] of the human scale [...] It wants to remain small. It wants to be parochial; there's something about the novel that wants it to be that size - and yet, the space between public life and private life has diminished"

of Jane Austen's private-not-public-sphere subject matter: "that's not to say the British military does not appear in her novels. They do; their function is to wear red uniforms and look cute at parties. I think we can all agree this is a very important function. But [as to] the war with Napoleon [showing up in her novels], not so much."

"that a man's character is his fate, that his character is his destiny - that is the bedrock of the story. But if you look at [the casualties of 9/11], their character had nothing to do with their fate - if they were kindly, or unkindly, good parents, lazy workers. So what do you do when this is so? There has never been so much of a sense that our lives are not in our control, based on who we are, based on our characters"
{I often wish that reality were more like art in this regard - that every movement, every action, had a certain purpose that advanced some plot, even if it were larger than ourselves. A main character falling down stairs and dying is a really bad plot device ninety-nine percent of the time, but it happens. In reality, it happens.}

re: identity politics - "on the rise. But when you look at your identity like that, in a multiple way, you can find places of agreement with other people that gives you a place of common ground. The wide view of identity politics gives rise to tolerance; the narrow view gives rise to extremism, racism. People seem to define themselves by what they don't like. You define yourself by what offends you."

"who has power over the story? Who will have power over the stories we tell, the stories we live by, the stories we live with? We are the story-telling animal. It is the definition of human beings that applies to no other creature on the earth. Family is such a narrative. Power, country, religion is such a narrative. When the possessors of power say, no, you do not have power over that story, and we will tell you what it means, and if you do not accept that, bad things will happen to you. And all of us want to shape the larger narrative (of society, of the world) and if we do not have that power we feel imprisoned. We are the story-telling animal."

"'for god's sake open the universe a little more.' It was as good a description of what great art tries to do [...] This is not only literature, but music, art. All great arts try to do this. If you want to push out the boundaries you have to go to the boundary, and this can be very dangerous. And so quite often when the artist goes to those borders and pushes, there is a great force pushing back, which can be very harmful to the artist. But art tends to endure. The poetry of [illegible and likely misspelled] outlasted the Soviet Union. The poet Lorca [was murdered]; the poetry of Lorca outlasted the Spanish Civil War. The artist is often damaged even if his art survives. The problem [of fragility] is not the art, but the artist. But that's the job."
{Part of the reason I'm auditing Spanish this year is simply so I can one day read Lorca without translation. Last semester, in translation workshop, several classmates translated from Spanish, and of all the languages and all the poems, Lorca's were among the most captivating. A caveat: don't trust translations, by the way. I can only speak for English --> Mandarin and Mandarin --> English translations, but they're often...very strange. The awkwardness in the translation is often not intended in the original.}

"yes, it was a delicious cupcake"
{Someone had given Rushdie a cupcake at the open conversation, and thus...}

on Julian Assange and Wikileaks: "Whatever side you're on, I think we can all agree he was a creep. [on the subject of international conferences wherein various countries encouraged one country to go to war, knowing that if it happened those same encourager countries would be the first to denounce the attack and the war:] the level of hypocrisy in among these countries' leaderships. [...] [Assange] leaked unredacted material - names, addresses, the jobs they've done in intelligence. That's all out there. [It was] one of the most irresponsible acts of our time. [...] I am in favor of transparency. People have been leaking from the secure domain into the public domain [for a long time. But this - irresponsible.] To try to portray Sweden as some unfair banana republic - I mean, Sweden! The idea of the Swedes as being Machiavellian... it would be like saying Swedish jokes were funny. There are things that Swedes don't do - terrorism, comedy."

on his son, saying that Haroun's pacing was sluggish: "it was the best literary advice I ever got. Precise advice."