Salman Rushdie spoke at a convocation here last Wednesday, brought to Oberlin by Professor Needham, reportedly after twenty years of trying. I frantically scribbled down notes while he talked, trying to find a concrete reason for his eloquence and wit. If anything I noticed as I did so was that he did not use any filler words - um, uh, like, etc. Later, I was trying to replicate this which a friend, with the result that instead of just saying the filler word, we would tag an exasperated sound onto it.

After the talk, Rushdie conceded to sign books for the audience. I would just like to add that it's much less awkward to ask a guest to sign a book to you (mostly because they have no clue who you are and will forget you in about 0.5 seconds) than to ask a professor. With professors there's this impulse to at least try and act like you're on equal ground as colleagues [even if they're absolutely brilliant and you're terrified]. Asking for an autograph seems to verge on shameless fangirling.

Anyways, here are some snatches of the lecture (they are in quotations but the accuracy of the quotes is highly dependent on how fast I could listen, remember, and write):

"the literature of the fantastic is often by nature/intention escapist. I'm not interested in escape. The emphasis for me is [finding a way to respond to the world]. [In India] no one really put that much emphasis on the fantastical [elements of the book]. They read it as historical. Which is also wrong." 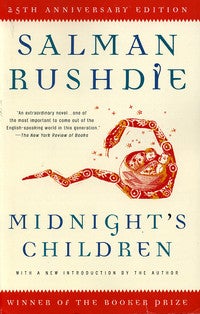 "of that book...works through the filter of memory. And memory is flawed."
{By the way, this is more or less the core of my nonfiction workshop this semester. When I say, I'm a creative writing major, and follow that up with, yes I'm in nonfiction workshop at the moment, people tend to ask me: "How is that creative?" But apparently this is how - the faculty of memory is inherently flawed. And we lie, too. But we call it conjecture.}

A. Needham: "...this really ornate, gorgeous gorgeous prose... I know enough Urdu to know it's a very ornate language."
S. Rushdie: "the difficulty with ornate language is that it walks the edge of purple prose - there is the danger of becoming almost sickly, overwritten. [...] Cormac McCarthy writes in an almost biblical language [overlaid on the subject matter of thieves] which gives the story an almost mythic quality."

A. Needham, on Shame being her favorite Rushdie book: "I have been called a self-hating feminist for liking it. Yes, yes indeed."

when asked about violence in reaction to his books, and whether or not he feels responsible: "books don't generate violence; violent people generate violence. [...] My Japanese translator was murdered; the Italian translator was kicked and stabbed. My Norwegian publisher was shot three times in the back. They were sort of soft targets; they weren't who they [the aggressors] really wanted. To have any moral backing at all, you need to [believe] that people are responsible for their own actions."
{People cheered. I'm sure you can imagine.}

"I'm a historian by training. I never studied literature. You know history is something we write about the past [... and you have] two different narratives fighting for the same space [with respect to Israel and Palestine]."

"Anne Rice, J.K. Rowling - those books, they're not built to last; it was never in their intention or their nature. It can be very cruel, the swing of literary fashion."

on a film director he would recommend: "Guru Dutt."

"what images of beauty did I have during the writing of the book? Fell in love a few times, and that was good... and then not good."

"[the ability of books to] draw people into situations that they [the readers] may not have access to, or may not want to see" 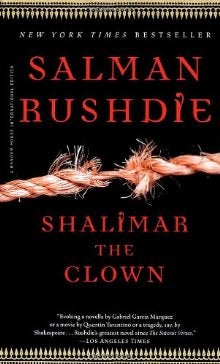 "things that you may not want to write about, because they're not writeable - for example, atrocity - one way [to write about it] is to be deliberately gleeful about it, deliberately amoral (like American Psycho). The other way is to really go for it, but if you do it wrong it seems like wallowing, and that's ugly. My solution was always to enrich the language. Language is for saying all that you can say."

"as any lawyer knows, if you translate it [the words] you change it, which is dangerous. If you translate it you are changing the law [in reference to the fact that the Indian constitution and penal code are written in English]. There are many Englishes. In India sexual harassment is, euphemistically, 'Eve-teasing'. As in, "repeated episodes of Eve-teasing on university campus'. The person who is the accused in a court case is called an undertrial. The plate next to your main plate is called the quarter plate. When there is a shootout and the police kill someone, there's a great euphemism; it's an 'encounter'."

"[writers used to be able to draw on] Greek and Roman mythology; now, you can't make that assumption. But there's always a shared culture, even if it's an episode of The Simpsons. And then, what are the things that are not part of that? Marginal, or dissenting."

"why I chose to be a writer? I never had another plan. But really I think it's to do with the love of reading. Sometimes it makes you want to be a part of that world, from the other side of the fence. I think I was lucky to grow up in a place without television. We had movies, and radio, and talking to each other - not texting."
{I had a brief moment in which I swore not to watch any more TV, and to text sparingly. I do text sparingly because, for all the years of violin, my thumbs were not well-utilized and thus don't have the dexterity of my other fingers. On the TV front, I promptly went back to hulu the next day. But of course, that's a computer.}

"it took me more or less ten years longer [than contemporaries like Ian McEwan] to find the stuff that I had to do [re: his writing and subject matter]. It was all right in the end, but I used to hate them."

S. Rushdie, on how Moby Dick has outlasted its critics: "and yet they [similarly ill-reviewed books] are still here and the critics are dead."
A. Needham: "We shall stop now."