As I discussed in my last blog post, I really love self-directed and open-ended projects. Not only do I remember more of what I learn from them, but in the process, I get to understand why I'm doing what I'm doing, make connections to personal experience or other classes, and direct my attention to whatever I feel deserves it. My last post was about the first eight self-directed academic projects I did at Oberlin, which happened in my first two years. This one is a slightly less in-depth account of the last eight self-directed academic projects I've done here, which were all in my third year.

In Environmental Policy, we had to choose a policy change that happened within the US and explain the factors that allowed a policy window to open up— essentially, the political conditions that made the change possible. I wrote about the legalization of commercial hemp in the 2018 Farm Bill. I had not done a lot of research on the internal affairs of the US government before, so this was really new to me. It was hard at first to figure out what exactly I was researching, but I came out of the project with a much better understanding of the Farm Bill (which always seems to be tangentially related to everything I'm studying) and, more broadly, how laws are changed.

Another Environmental Policy paper. For this assignment, I spent time unpacking the ways that the International Monetary Fund and the World Bank exacerbate global power imbalances, taking as an example Ghana's (very made-up, completely unjust and unnecessary) debt to the World Bank. Through conditionality on loans ("I'll give you the money you desperately need, but only if you…"), these NGOs coerce less industrialized nations into accepting unjust economic policy that sinks them further into poverty. The NGOs' governance systems allow only the wealthiest countries to share in decision-making (literally, you have to pay for representation), making it virtually impossible for countries that have been exploited by colonial powers to change the cycle from the inside. The loans often fly under the radar because they're under the guise of "aid" and "charity." This was one of those assignments where even if you had the right gut feeling about something before (I was highly suspicious of international aid projects already), you learn the specifics of how it actually works and suddenly you start to see it everywhere, impacting everything.

Technically the professor suggested this topic as one of many options for a group presentation, but the project was pretty self-directed, so I'm counting it as open-ended. In Chemistry and the Environment, my group presented about where microplastics come from, types of plastics and how they are made, why they don't decompose, biological effects of microplastics, and whether they're dangerous. (Spoiler alert, the answer is definitely yes.)

This was my final paper for Food, Health, and Culture. It explored the perceived rift between food and medicine in Western medical tradition. Most of the research I was finding that countered that rift was set in rural communities in Bangladesh, one of many places globally where it is much more common to rely on traditional healers than doctors. I wrote about four ways of describing the relationship and overlap between food and medicine that I kept coming across. All of them were either ways that academics and practitioners had described that overlap as found in Bengali healing traditions, directly invalidating to those traditions, or attempting to evaluate them through the lens of Western science. I wrote about the limitations and/or insights of working with each.

Positively the most goofy and lighthearted project I have ever done for school. In Taste the Nation: Culture, Consumption, and American Identities, we studied several different "tastes." One of them was kitsch, which I can now tell you (and it took me forever to understand this) is a taste for ease of consumption (often mass-produced) and hyper-sentimentality (often nostalgia expressed as an imitation of something famous or from another time) that completely ignores pretentious taste hierarchy. Critics of kitsch would say that it's just bad taste and the only reason you like it is because it's sentimental. I still don't have much of a personal opinion of kitsch as a whole, but I can tell you that flipping through seven different Pixar movies looking for examples was great fun. I'll leave you with my two favorite examples: one is Miguel from Coco's secondhand guitar, which he has drawn on to make it look like Ernesto de la Cruz's, right down to the vine-looking pattern and the rows of teeth with the top second-to-right one colored in. 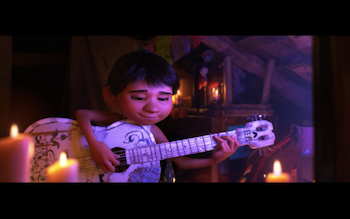 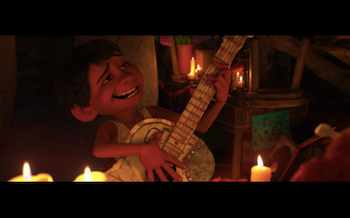 The other is Luca and Alberto from Luca's motorcycle fantasy. They start out wishing for a fancy one from a poster. The kitsch comes in later, when a rusty, flat-tire one substitutes the shiny one in their fantasy seamlessly. 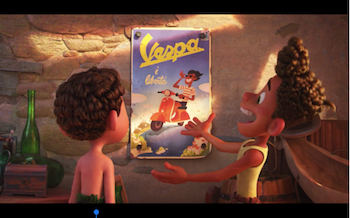 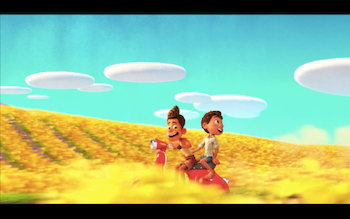 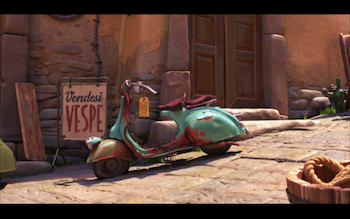 In my final paper for AgriFood Systems in Transition, I explored the relationship between regenerative agriculture movements and the USDA organic certification. In a nutshell, while the certification definitely has its uses in interstate trade where standards for the "organic" label aren't the same, when the certification became nationalized, it took away the local specificity that makes sense for something so microclimate-based as agriculture. The nationalized version can be tedious and hard to maintain for farmers, not to mention being too expensive for most small farmers. The current organic certification creates an added financial barrier for both producers and consumers while not providing any economic incentive to produce ecologically sound food. In situations where food is locally and communally exchanged, a certification is not necessary because of the trust and transparency between producer and consumer. Because our food systems for the most part aren't there yet, we do need practices for verifying the agroecological practices of farms. Ideally, though, they would be geared towards supporting the reemergence of regenerative agriculture.

In Practicum in Agroecology, we had an assignment to design something that would potentially be useful for a regenerative agriculture project. I designed a nitrogen remediation garden for soils that had been depleted by years of industrial agriculture, set in an imaginary Northeast Ohio field. I created a plan for the first three seasons of a bioremediation project using diverse nitrogen-fixing species hardy to this zone (6a). Some crops were timed to be able to use green mulch from specific others, and some are next to each other because they're companion plants (each helps the other grow). Here is a sketch: 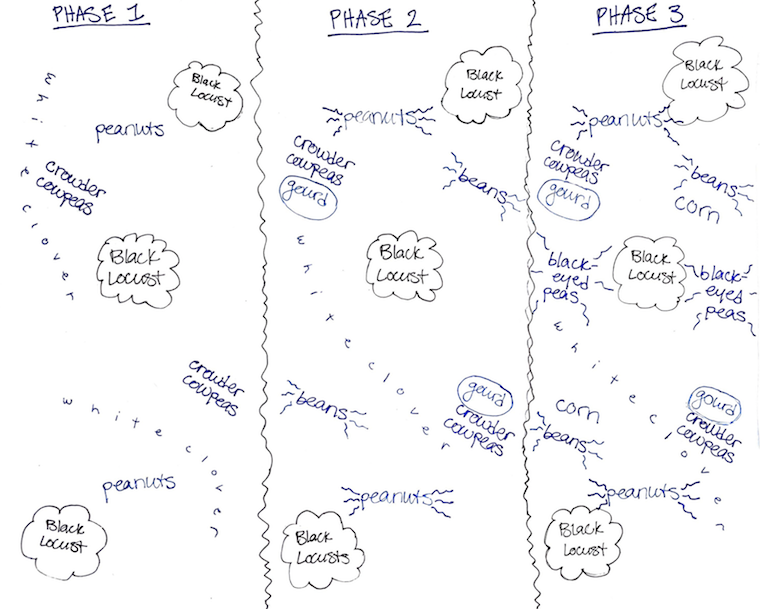 In Taste the Nation: Culture, Consumption, and American Identities, once we had read about several possible political implications of cookbooks, we had an assignment to write a recipe we were familiar with in a politicized way. Our professor made them all into a class cookbook, which was awesome! I wrote about a little pancake ritual I've had with my father since I was little where we make pancakes in all kinds of shapes (most often Mickey Mouse's head). We call it Mickey Mouse pancakes, but I titled the project Inner Child Panqueques because I was writing about all the ways this recipe reminds me that creativity and goofiness belong rightfully to us all. I wrote about my perfectionist tendencies being influenced by exposure to carceral/punitive mindsets as a child, even in indirect ways that did not target me (seeing people get arrested, the way teachers and bus drivers talked about getting in trouble, the phrases "good kid" and "bad kid," etc.). In subtle ways, the practice breaks norms we have around recipes and assimilation, and it stops my perfectionism in its tracks.

In my last post, I wrote about getting to sculpt my education here even if I'm not building it from the ground up (to the disappointment of my mentally Hampshire College-bound high school self). Since I've been here, I've studied a lot of things on my own volition. Because of outside-of-class opportunities like winter term and independent research, what you can study is not limited by the classes that already exist here, and there are lots of classes where what everyone studies in depth is more personalized than you might think. A lot of the items on this list are very interconnected. Part of that is because at one point in my third year I was taking four classes on food at once (lol), but part of it is also that I kept using my open-ended academic projects to explore curiosities that had begun elsewhere. That's not an experience that every Obie shares, but it's sitting right in front of you if you just reach out and take it.