Spring break came and went. After those blissful days, the first days back here crawled by, speeding up only as the due date for a substantial anthropology paper drew near. The weekend after spring break appears to have whizzed by me in a blur of rehearsals. Today is Monday, but I could have sworn I just finished class and was ready for the weekend yesterday. Where did Saturday and Sunday go? In between rehearsals, I partook in all the appropriate weekend activities - eating cheese and crackers, going to see the Cleveland Orchestra play, basking in the welcome sunlight, listening to a friend's junior organ recital (HOORAY CHARLOTTE, it was wonderful!), and forgetting I had homework until Sunday night - but I still find myself wishing there were a couple days put aside for us all to recover from our busy weekends.

If I'm going to have a busy weekend, though.... Rehearsals are a good way to do it. I'd pick rehearsals over homework any day. Rehearsals usually only happen if you are playing with other people. And guess what? I love playing music with other people. Turns out, going to a conservatory is a pretty surefire way to ensure you get to do just that. The great thing about Oberlin, though, is that even if you're not in the conservatory? This place has way more people who want to play music... with YOU!... than a normal person can handle. It's actually kind of overwhelming.

If you are in the conservatory, you have no choice. You will play music with other people. It may also be overwhelming, but you will soldier on.

Piano majors are required to complete a measly four ensemble credits. Other majors need different amounts of ensemble credit and/or different types (e.g. large ensemble credit). You can also always take an ensemble for "0" credit, or just do an ensemble for fun. I have sung in Musical Union, which is a large choir open to the community as well as any students, and I have played cello in a string quartet, two oboe quartets, and in College Community Strings. This semester I have a piano trio and it's the first time I will earn an ensemble credit on my primary instrument. We are working on the Mendelssohn D Minor (that is a link to Rubinstein, Heifetz, and Piatigorsky playing... not a totally accurate representation of what my trio sounds like, but too wonderful not to share...) - what an amazing piece. The piano part has a ridiculous number of notes, but I think I will survive. I'd just like to point out that I have played my cello with a group of conservatory students every semester. I do not pretend in any way to be a cello major or competent in any way, but apparently there have not been enough cellists to go around. I know a few other non-major cellists who have played with really good groups. If you are interested in being in a group in the conservatory setting, there are definitely ways to do it.

Pianists are also required to complete four semesters of accompanying. Since Oberlin is an all-undergraduate institution, a significant portion of the accompanying load is picked up by the students. If you are like me and really like accompanying, then this is awesome. I know a lot of pianists who aren't thrilled by it. This year I have played for two trombone recitals, in quite a few studio classes (viola, violin, cello, and trombone), and recently have begun rehearsing for people's juries.

If you are interested in being in a group outside the conservatory setting, that's cool too. There are a multitude of bands on campus, ExCo ensembles, and... who knows what else out there. I wish I did more stuff like this. For me, at least, the conservatory has tended to be a classical training ground. Sometimes I feel a little boxed in... and oh boy, do I LOVE getting outside of that box. The best thing that happened to me recently was subbing for the Modern III dance accompanist. I'm the Ballet I/II accompanist which is pretty much coming up with waltzes with particular phrase lengths....all the time. Fine, but potentially deadly. The one dose of Modern III was a breath of fresh air. I would really like to accompany more modern classes in the future. My other out-of-the-con project this semester has been playing cello with the Oberlin band Bearcubes. Oh, Bearcubes! You are the best! I am part of a string quartet that has a small part in some of the tracks they are recording for their new album. We all squeeze into Claire's bedroom with headphones half-on, fitting into what they've already recorded. This band is pretty great ... please go buy their new EP and attend the CD release party on May 2nd. 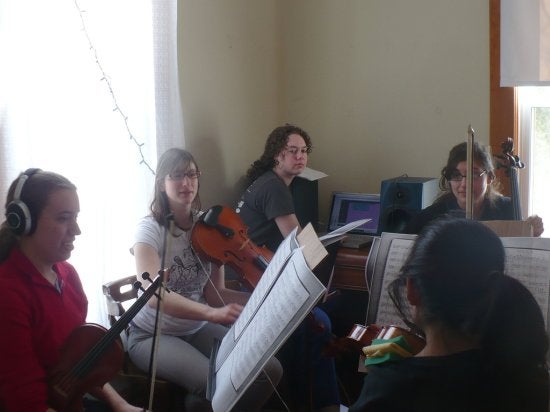 Sunday in the bedroom studio with the Bearcubes

Yes, Oberlin is small. Yes, Oberlin is in the "middle of nowhere" (kind of, not really). But there is a lot going on. If you want to play music with people, it won't be hard to do. You, too, can fill your entire weekend with rehearsals, practices, and recording sessions. Oberlin is your MUSICAL OYSTER, except not slimy and disgusting. Please enjoy it. It is one of the best things about this place.