So, Winter Term forms were due two Fridays ago, sort of. I was totally under the impression that once the deadline for turning forms in to the registrar was over, it was over. Apparently, the Oberlin College registrar is a little more flexible than, I dunno, the IRS.

I did turn in a form on Friday, lest you question my responsibility and zeal for deadlines. Unfortunately, the off-campus individual project I had planned on doing this January got derailed early two weeks ago, and I had to scramble a bit to find a new sponsor and project I could do. Our wonderful track coach Ray Appenheimer, whose name is an anagram for Hep Army Perinea (and a pretty awesome and gross phrase regarding a deflowered primate which I will not use here) was understanding and told me he trusted me enough to come up with a project and signed off on an amorphously-titled "Sustainable Agriculture in Mid-Missouri" project.

As of now, I am planning on continuing with this project, unless I decide to change it and do intensive photography study on my own. The cool thing is, I have until JANUARY 20th to change my project if I want to. How boss is that? I don't anticipate needing all that time, but it's nice to know I have the option, because if the emails I've been getting from mid-Missouri farmers lately are any indication, January may be the worst time to study farming in Missouri. Maybe I can look at greenhouses instead...

In case you don't know already, Winter Term is really cool. You actually get to do stuff! When he came to our Environmental Studies class to talk about sustainable development and the new green Arts District in town, David Orr talked about the propensity for academics to think a lot and talk a lot and make theories about real world issues, but to be slow to actually move to make changes. Students often take the opportunity during the winter to apply any number of lessons they've gotten in class. Many people choose to work with politicians and PACs. Basically, you spend some time being an adult. Well, you can if you want.

This time is also an opportunity to do things that you've never tried before. Because, believe it or not, it's not always possible to do so during class times at Oberlin. While departments are generally open to anyone of any major, I've found some departments daunting, if not difficult, to venture into. I guess I was too reluctant to bother my advisor last year to ask if there were any special hoops to jump through to get into a 100-level Theater class, and I was disappointed when registration time came and I couldn't get consent to get in since I hadn't auditioned for the class the week prior. No offense to any graduates of the Creative Writing department or professors in the same, but that department is hard to break into. Aside from a couple of classes for freshmen and one other that I'm aware of, classes seem to be limited to majors. I suppose that's kind of the point, that the program is more like studying at the Conservatory than a lot of departments. It just seems like such a cool department, I wish it was a little more open. A.I. or D.W., tell me if I'm way off here with anything.

I finished a movie! Well, let's call it a film. Nay, a slice of life preserved on celluloid. I'm the unfortunate dandy, the paperboy is Mike Migdall (Hi Nancy!).

I participated in an EEG study in the Neuroscience department yesterday and won $19.10 in this card game thingy. The young woman giving me the test told me it was an honors student's project, which was really cool. The opportunity for undergrads to do research is one of the things that really drew me to Oberlin, and when the day finally comes when I am required to choose (but not necessarily keep) a major, I hope I can do some really cool research with a really cool professor. Here's a pic of the sucker-marks I had on my head after the experiment. Looks like I got attacked by an octopus. 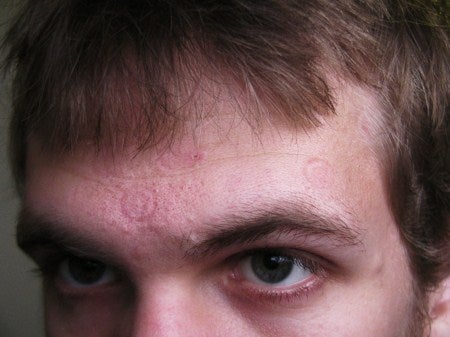 A tiny octopus, like the kind they sometimes make them eat on Amazing Race. Hey, are y'all watching Sing Off?

Not to be picky, but your anagram is short an "e." May I suggest "newt mitre"?

Gen- I've heard of the show, but without Mario Lopez hosting, I don't really think it'll be worth my time.
Tess- Oh, Tess, poor, innocent Tess- You've made two mistakes. The first is excusable, since part of "Re: Newt Trim" (the Re: part) sounds like an intro to the anagram. With the 'Re:,' the anagram is complete. Your second blunder is less easily overlooked, and may very well bring everlasting shame to the Yanisch name. "Newt mitre" lacks one important 'R' and fails quite tragically as an anagram. Sorry if this feels harsh, but the world is cold. If it makes you feel any better, I never got a callback when I auditioned for a spinoff of 'The Suite Life of Zach and Cody,' so I've had occasion to sing the blues, too.