As a kid, I hated messes.

I didn’t jump in puddles, roll around in the mud, and I didn’t like getting dirty. I hated the feeling of having my hands goopy, so much so that I dreaded arts and crafts projects that involved papier-mâché or clay. I even used to hate getting lotion on the palms of my hands. Given this fact, it may be surprising that much of my time this winter term was spent elbow-deep in clay and mucky water, the whir of a pottery wheel filling the studio.

That’s right, this winter term I learned how to make pottery on a throwing wheel during an internship at a pottery studio in Santa Fe, NM (check out the studio)! In exchange for helping out around the studio and providing manual labor, I got to use the space and the materials, and throughout this month I learned a lot about technique, process, and the amount of work it takes to run a pottery studio and gallery. I always wanted to learn this skill, so this has definitely been my most fun winter term project so far!

The process this year for finding my winter term project was slightly tumultuous. After my initial plans for winter term this year fell through because they were unfeasible either monetarily, logistically, or otherwise, I found myself unsure of what I would do. I knew that I wanted to do a project that was not career-based or super academic.

Initially, I didn’t want to stay at home in Albuquerque, NM, for winter term, since I’d done that for the past two years, but I ended up finding this internship on Handshake, an Oberlin-specific internship and job-finder website, and it seemed perfect because I could stay at home and not pay for housing. That, and I would get to learn a new skill that didn’t have to do with academia or building my resume. I got in touch with the sponsor listed for the internship on Handshake, my host Theo who is an Oberlin alum himself, and set it all up! It all happened pretty quick and was very low key. Then I got my German advisor to sponsor my project and that was that!

When I first started my project, I felt super ridiculous being called an “intern” because I literally knew nothing about making pottery or how the studio was run. Luckily, Theo was super helpful and patient with me and I picked up things fairly quickly. I can’t really say what an average day at my internship looked like because every day was a little bit different, but there was a general routine.

On the days I went into Santa Fe, I would take the train from Albuquerque which was a super beautiful route through the New Mexico landscape. I usually slept in the morning because the train was earlier than I’m used to and would read and or admire the sunset on the ride back in the evening. For someone whose “commute” is generally a 10-15 minute walk from my dorm to my classes, this was definitely a different experience, but one that I actually enjoyed, though I think that if I had to commute three hours total every day for months on end, I wouldn’t enjoy it as much.

When I got to the studio in the mornings, I usually started my day by mopping the floors. I’ve done some mop-swinging in my co-op life, so I was no stranger to this task. It’s not good to breathe in a lot of clay dust, and it accumulates fairly quickly, so I tried my best to do this job every day. Some other tasks I did during my internship included loading and unloading the bisque kiln (the firing stage before the pieces are glazed), folding rags and hanging up clean aprons, unloading the glaze kiln, working the pug mill (a machine that turns giant clay chunks into more manageable compressed clay cylinders), ferrying things back and forth from the gallery and back studio to the main studio, and glazing student pieces.

The studio offers classes, both one-time and weekly, so sometimes groups come in to make some pieces, and then the studio staff trims, glazes, and fires their pieces before they get shipped back to them. One morning I spent an entire day glazing pieces, which mostly meant using a giant drill with paddles to mix the glazes and using some funky tongs to dip the pieces in. Doing these everyday tasks was satisfying and I feel that by the end I really got a good sense of the process of making pottery as well as what it means to run a successful studio and learning space.

One of my best moments was when a woman came in with her friend to inquire about joining the studio. The friend didn’t know anything about pottery, but I was able to answer all the questions she asked, which really made me feel like I’d learned something, which was a great feeling. I really felt like part of the team by the end of the month, which is partly due to working with Theo, who was an Oberlin student himself. We talked a lot about co-op life (he was a yogurt maker in Harkness), WOBC (student radio), studying abroad, and other college adventures. It was great to meet a fellow Obie and to see what he’d done post-Oberlin. It really reminded me that I could do anything after I graduate!

When I wasn’t doing tasks around the studio or mooching off the wi-fi from the next-door coffee shop (sorry Iconik) while I was eating lunch, I got to work on my own pieces! When I first started learning, I got frustrated a lot. Theo showed me the basics, but actually ended up breaking his wrist, so he couldn’t do a lot of instruction throughout the month. This ended up being good for me, though, because I had to do a lot of learning by doing, which for a perfectionist is hard! However, over the month I think my patience improved and I learned to let go when forms fell apart in my hands or turned out wonky.

Throwing takes a lot of patience, precision, and focus, so even though the learning curve was steep, I found the activity very immersive and sort of meditative in a way, since it required my whole focus. I couldn’t think about other stuff or my piece would turn out a complete disaster! Even though a lot of what I did was sort of self-directed, I learned a lot from the other potters who were part of the studio. It’s a nice little community, but every person also felt very independent, and a lot of people worked on interesting experimental stuff. It was helpful as a novice to get to observe other potters with more experience to see what they were creating and what kind of techniques they used. I don’t know how much of what I saw I was actually able to apply, but I definitely got ideas from other people and was inspired to try things that I might not have otherwise.

A highlight of the month was a Winter Workshop that Theo ran in the middle of January. Six other potters from a variety of places in the United States came to Santa Fe for a long weekend to work intensely on projects and to learn techniques from other local artists. I learned from the other Santa Fe potters as well as from my fellow workshoppers and from Theo and Leslie, the studio manager. Four days in a row was definitely challenging, because I spent all day working on an activity that I literally had a total of one week of experience doing. But I also felt like I knew enough not to make a complete fool of myself and enjoyed the camaraderie of hanging out with other potters.

At the end of the day, I managed to produce some work I was actually proud of. One thing I love about pottery is that it is both artistic and functional, beautiful and practical. None of my pieces were the same, but somehow, when taken all together, they had some sort of cohesive feeling to them. I’ve included a photo gallery—which is a new blog feature, so hopefully it works—with nice, professional pictures of my pieces.

If these were Linkedin profile pics, these pots would be getting jobs. I kid, but I am actually impressed with the pieces I was able to make with only a month of working on this new skill. As I mentioned a bit earlier, learning how to throw was definitely challenging because mistakes were more common than not, and I had to be patient with both the clay and myself or everything would fall apart, quite literally.

Something I came to appreciate by the end of the month is the human nature of pottery. No piece is perfectly symmetrical or even in shape, color, or size, because even the most skilled and experienced potter is still a human working with a natural material. When glazing a piece, for example, you have no way of knowing exactly how it will turn out after the firing. I grew to really appreciate this mystery. Theo says on his website that the vast, colorful New Mexico landscape inspires his work. I really understand this! Nature isn’t perfect, but it is beautiful and inspiring, something I found myself feeling every time I rode the train home through mountains, desert, and a seemingly unending sky.

Clay comes from nature, so how could we possibly expect objects made from it to also be perfect? The beauty in pottery, for me, is in its imperfections. And sure, while I ultimately want to have neater, rounder, more centered pieces, some of my favorite things I made this month happened by accident. I had an art teacher as a kid who said, “The hardest part of art is knowing when to stop.” In the context of pottery, this couldn’t be more true. And for a perfectionist, learning when to stop working on a piece and just let it exist as it was, became a very important lesson.

I had an amazing month making art that I can use, connecting with people and my landscape, and learning to trust both myself and the clay I shaped. 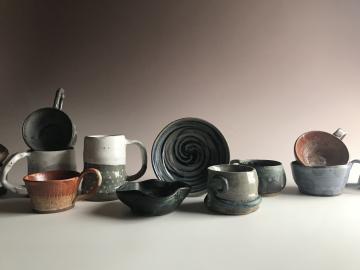 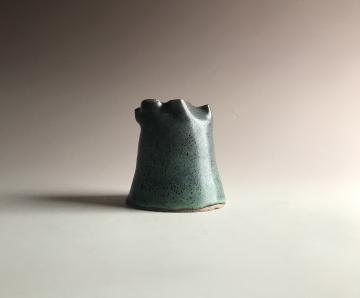 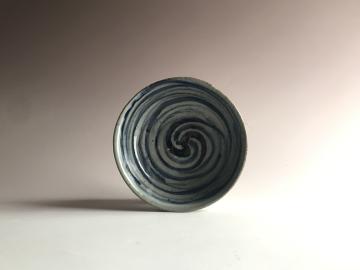 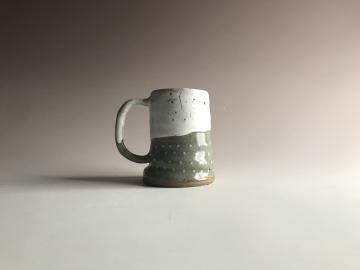