If you're a Latin student - or, perhaps more likely, a Monty Python fan - you probably know this scene from Monty Python's Life of Brian. Brian sneaks off by night to plant some anti-Roman graffiti in order to gain acceptance into the Judaean People's Front (or is it the People's Front of Judaea?). Scrawling "ROMANES EUNT DOMUS" in letters a foot tall, he steps back to admire his work and bumps into a Roman centurion, who grabs him by the ear. "What's this, then?" he snarls. "'People called Romanes, they go the house?'" As the petrified vandal quakes, the soldier drags him through a rapid review of Latin grammar ("Motion towards?" "Dative, sir! Aaahh! N-no - not dative, accusative, accusative!") - then releases him to write out the correct phrase a hundred times.

This, in essence, is what I did for all of Winter Term. Except that instead of being Brian, I was playing the role of the centurion. And the language in question was ancient Greek, not Latin. And we didn't write on any walls - well, actually, some of us did, but not officially. I'm not explaining this very clearly, am I? Let's go through it again.

I've spent most of the past month saying, "I'm not explaining this very clearly, am I? Let's go through it again." See, my Winter Term project was teaching an intensive ancient Greek course. In eighteen days, we - my co-instructor and I - guided three poor, innocent students through the entire Greek 101 syllabus. It was at times wrenching, gruesome, humiliating, brain-straining to the extreme. It was also delightful, quizzical, informative, and riotously funny. And despite the occasional feeling that we were all about to be dragged off by our ears and executed, all five of us made it through in fine form. 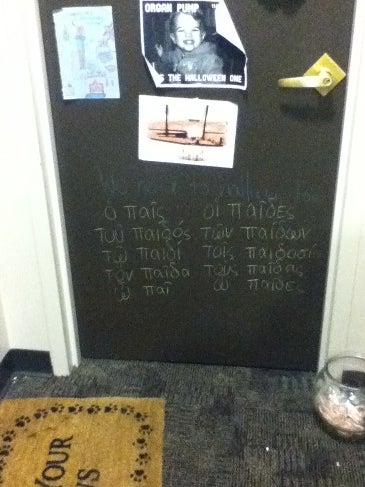 Like I said, we didn't officially write on any walls -- but one of our students decided that the best way to learn noun forms was to write them in chalk on all of the doors in his co-op.

Each Winter Term, Oberlin offers a host of intensive introductory courses in languages from Spanish to Hebrew to Russian. Usually taught by junior or senior majors from the relevant departments, these classes are a chance to immerse yourself in a new language (or reconnect with a forgotten one). They're tough, but they're rewarding: if you survive the month, you can often move straight into a 102-level course. The Classics department likes to get in on this game: in fact, Winter Term Greek in 2009 was my first experience in Classics at Oberlin. Three years later, I'm wrapping up a major in ancient Greek, so clearly something went right.

But taking - or teaching - intensive Greek or Latin is a little different from, say, French. The goal is to get you reading ancient texts as quickly as possible, so there's a heavy emphasis on reading, with almost no speaking or listening. The vocab set is also a little skewed: our students immediately get a handle on agricultural and military language, but the stock material of modern language courses - courtesy phrases like "Pleasure to meet you! How are you today? I'm doing just fine. Could you direct me to the restroom, please?", and terms for weather, colors, types of food - is entirely absent. (Words I have learned in seven semesters of ancient Greek: "sea battle", "yoke", "emissary", "treaty", "to sow". Words I still do not know: "yes", "no", "thank you", "you're welcome"...) 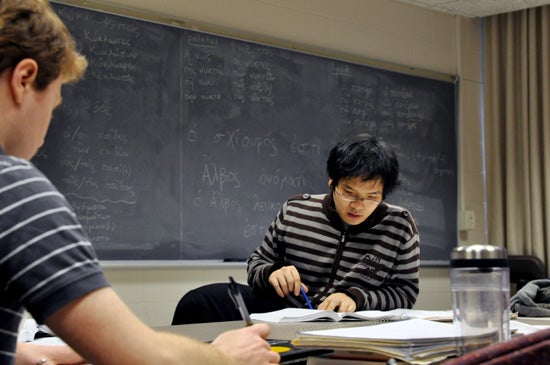 No small talk here: Phil and I are tackling an adapted passage from the Odyssey.

In addition, for those who have never experienced the Greco-Roman classics in their original tongues, rest assured that ancient Greek grammar is beastly hard. The good news is that for the most part, it's very regular; the bad news is that there are so many rules to memorize that it seems entirely arbitrary. The traditional approach to classical language pedagogy goes like this:

0. (optional step) Say something cheerful and/or reassuring to your students.
1. Present an enormously complicated paradigm. Write it up on the board and read it aloud a few times, as though that explains everything.
2. Guide students through a reading passage. If written for the occasion, it should be as dull and contrived as possible; if taken from an actual ancient text, it should be significantly more complicated than the grammar that students have actually encountered to date.
3. Send your students home to memorize several paradigms and a lengthy list of vocabulary.
4. ???
5. Profit!

After doing this for a solid year or so, the theory is that you know enough grammar to read texts that are both authentic and interesting: at the end of Greek 102 students begin Plato's Apology, and 200-level courses cover the Iliad, Herodotus, and beyond. In the beginning, though, it's a long, hard slog. Condensed into eighteen days, this doesn't make for an easy Winter Term - nor a fun one, unless your love of conjugating verbs verges on obsessive. 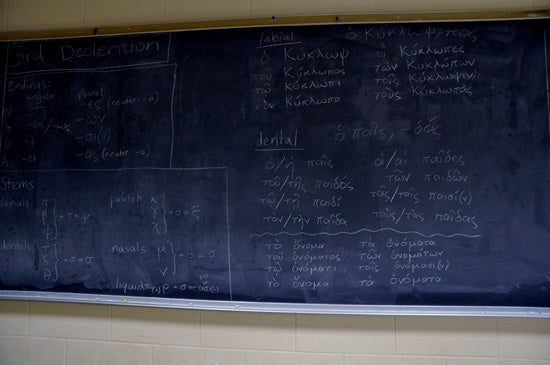 The nouns! They're taking over the blackboard!

This was the problem Jamie (my co-instructor) and I were up against. Both senior Greek majors, we are officially masters of memorizing strange vocabulary and recognizing obscure verb forms; both absolutely in love with Classics, we had begged to be able to teach Winter Term Greek this year. But when we actually sat down to plan the course.... well, suddenly I had a new admiration for the professor who was able to coax laughter from our intro Greek class day after day, and an uncomfortable sympathy with the high school French teacher whose lessons I had yawned through. How can we get through all this damn grammar and still make this course interesting? How can we make sure there's some meaningful take-home lesson for students who may not take another Greek class again? How can we make ancient Greek come alive?

So we covered the blackboards with English derivatives, the modern-day offspring of the strange words we were learning. We played Hangman with the strangest phrases we could find (can you spell the ancient Greek word for "sausage-seller"?). Passages from Herodotus got turned into fodder for Mad Libs, the game that taught me parts of speech in English as a kid. (It's much harder when you're being asked for the the aorist middle indicative third person plural of an intransitive verb, instead of just a noun.) For cultural enrichment, we screened 1962's The 300 Spartans. On one snowy Friday afternoon we even trudged across Tappan Square to the museum, where we squinted at the letters on ancient cups and coins and viewed pages of a manuscript written in Byzantine Greek. At the end of the month we collapsed, students and teachers alike, heads full of Greek. 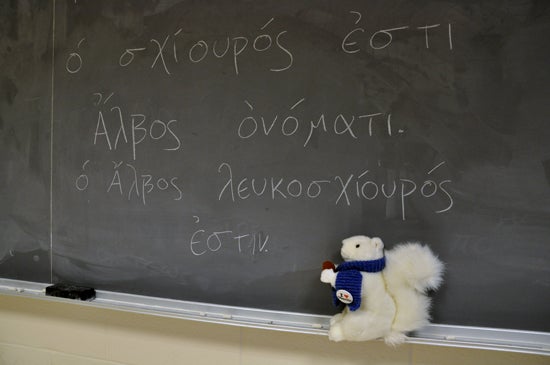 The sentences on the board read, "The squirrel is named Albus. Albus is a white squirrel." Fun fact: the Greek word for squirrel literally means "shadow-tail."

During my first encounter with Winter Term Greek, I was a first-year who'd never taken a Classics course at Oberlin, didn't know about aorists and optatives, and couldn't tell you what had happened at Thermopylae or Marathon. This time through I was a senior in love with Homer and Sappho and Sophocles, and I'd just finished the last class in a Greek major. There's something undeniably poetic about having this course to bookend my education: it nurtured my love of Classics at the very beginning, it gave me a chance to share that love with a whole new crop of students, and it affirmed my eternal respect for the professors who've guided me through four years of irregular verb forms and battles against the Persians.

Plus, next time someone tells me that ancient Greek is a dead language, I've got a folder of Herodotean Mad Libs with which to prove them wrong. It just doesn't get any cooler than that.

The photos of Phil, Albus, and our crowded blackboard are all courtesy of Ma'ayan. Thanks for visiting our class, Ma'ayan!

I bet you are an awesome teacher. I wish I had gotten to take some sort of class with you, although I'm not sure my brain is up to the challenge of Ancient Greek. Hope you have a great spring semester!

I wish I had visited during Mad Libs. Does the ridiculous humor translate?

Nora: Oh, I wish you'd been in my class! I'll send Greek flashcards to you in Arizona...

Ma'ayan: I just asked Kye (who happens to be sitting right next to me) and his answer was an emphatic "YES!" There were multiple conversations about having an Ancient Greek Mad Libs ExCo.