In recent weeks I've had the opportunity to learn an abundance about Oberlin’s history thanks to a couple of coincidences. While I was sitting in Severance Hall waiting for my Intro to Statistics class, I noticed that on the table of various Oberlin literary publications and other reads to pass the time, there was an old copy of Hi-Oh-Hi, Oberlin’s yearbook, from 1945! I opened it and was transported to Oberlin in past times, seeing the students, faculty, and campus from many years ago. It was incredible to see all the ways Oberlin has both changed and stayed the same.

It was super interesting to see the past students and how their lives in Oberlin were in those days. I had fun looking through the different dorms and noticing which ones were still here, such as Barrows and Fairchild; when we say that the buildings at Oberlin have history, we’re not kidding! Another old building mentioned that’s still here is the Apollo Theatre, a place important to me as a Cinema Studies major. There was an ad for it in the back of the book, and it made me think about what movies may have been showing at that time; in my Intro to Advanced Cinema class we just watched Shadow of a Doubt, which came out in 1943 and so would have been fairly recent at that point. The old outfits and fashion were also interesting to see, especially the old sports uniforms! There was also a super cool picture of students doing archery. It seems like life on campus has always been rich and varied, even among our small student body.

One thing I was particularly amazed to see was the Musical Union, a choral group that I’m a part of today. I knew that the group was a longstanding tradition, but I didn’t realize just how long! I found out that MU was formed in 1837, so even at that point the group had been around for over 100 years! I was looking closely at the photos trying to see if I recognized the parts of Finney Chapel's stage that we still practice on. We even still present works of composers like Brahms as the yearbook mentions; in this past spring semester we performed his Requiem. Recently, we just performed with the Oberlin Orchestra and College Choir "The Ordering of Moses" by historical Oberlin alum Nathaniel Dett, and are preparing for our New York tour at Carnegie Hall! I’m so proud to be a part of the legacy of the Musical Union and to see how far it’s come!

There was a strange feeling to looking at pictures of the Memorial Arch and Tappan Square because they look almost exactly the same as they do now, parts of Oberlin that have been longstanding. On the other hand, the Conservatory building looked completely different, as it was a brick Victorian building rather than the current modern complex that was built in the 1960s. It seems the spirit of Oberlin hasn’t changed, though. There were many pictures of Conservatory students studying hard and practicing intently, with various instruments and professors committed to helping them hone their craft. In a picture of the Memorial Arch, there was a banner strung across it encouraging students to vote and have their voice heard. The yearbook also had a spot talking about a Non-Partisan Convention, which reminded me of the Community Candidates Night I just went to where local candidates from all parties could come and speak about their values as elections quickly arrive. Next to that page showcased the famous speakers that visited Oberlin in 1945, one particularly notable one being Roger Baldwin, former president of the American Civil Liberties Union. Oberlin still has many speakers visit to promote further knowledge and student engagement in their world. There was also a section dedicated to the Oberlin Chapter for the Committees of Correspondence, a group that allowed students to engage in local, national, and worldwide affairs. The students of Oberlin have always had the spirit of being involved in pertinent issues and fighting for what they believe in.

One other thing that was interesting to see in the yearbook was the Shansi program. Early the day that I found the yearbook, I had had another experience of getting to learn more about Oberlin’s past thanks to a class I’m taking, The Long War in Modern China. That morning we took a trip to the Special Collections on the uppermost floor of Mudd Library and found out more about Oberlin’s historical connection to China with the Shansi program and got to browse through some old letters and pictures curated by the college archivist. I’ll be recounting that in my next post, so stay tuned!

In the album below I’ve attached some pictures of the yearbook so you can take a peek into Oberlin’s past! 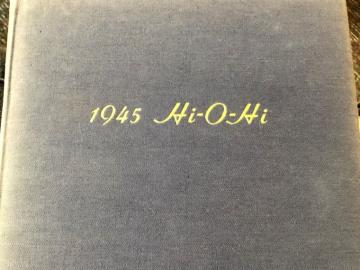 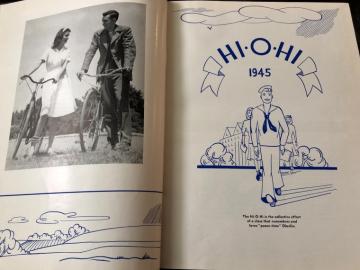 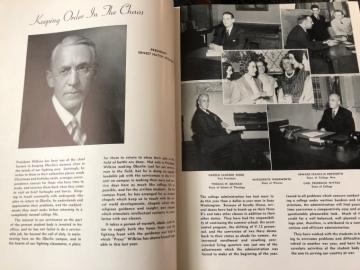 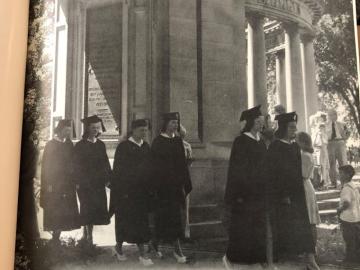 Oberlin's history is well worth exploring, Ariel. One small correction: the Barrows and Fairchild of today are not the same dorms as in 1945. The current Fairchild was built in 1949, and the current Barrows in 1956.