I never intended to end up on the roof of Peters. It just happened.

It's Friday night, and I'm out with friends enjoying myself. By that I mean I am alone in my dorm room staring at a blank piece of notebook paper under the white glare of my energy-efficient LED desklamp. For some reason, my ideas regarding Marx's dialectical analysis of capitalism don't seem to be going anywhere. A girl in my dorm room knocks on my door and asks if I want to join her at the 'Sco that evening. "It's Latin night," she reminds me (we live in Spanish House, which automatically makes this information pertinent).

"I don't like dancing," I tell her, and stand in the doorframe waiting for closing remarks so I can get back to my blank paper.

But she protests. "It's easy, you don't even have to know how to dance, you just move like this," and she indicates how easy it really is by dancing outside my door. I wait a beat, and then tell her that I don't like dancing. She leaves.

Time passes. Enter: roommate. "Hey, Paul! How's it going?" he asks, as friendly and gregarious as he was on the awkward day when we first met.

"Good," I intone into my computer screen. He hasn't stopped moving since he entered the room. He strides about rapidly, gathering up various objects and placing them in a satchel bag.

"So you're going for a walk by yourself with no destination?"

I button up my dark gray flannel shirt against the night air, which is unironically cold. "This is just a study break to focus my mind," I tell myself. "I have to be back at the dorm at 10," I tell my roommate. We talk about typical freshman stuff - girls, classes, and the loneliness that often accompanies a rapid transition of people and place. I can tell that something's on his mind, but when I ask him, he doesn't want to talk about it. He turns up the music on his iPad (one of the various objects he packed into his satchel) and focuses intently on singing along. I walk alongside him trying to enjoy the music just as much. We proceed like this on the sidewalk of North Professor until he suddenly stops and remembers something: "Oh, shit."

"It's an observatory night."

As in observe the stars with telescopes night. My first impulse is to think of as many synonyms for "nerdy" as I can, but I glance at my watch instead. I have a date with Uncle Karl in 20 minutes (now who's the nerd?), but I also want to go to the observatory. I decide to prioritize.

"Do you want me to come with you to the observatory?"

"Do you want me to come with you to the observatory?"

As we hurry towards Peters, I catch sight of the dome, now bathed in an alien red glow. "Like a red eye," my roommate remarks. We enter Peters at ground level and catch the tail end of a crowd noisily making its way up the four flights of stairs that lead to the observatory. My roommate insists we take the elevator. "I love the stars," he tells me as we slowly ascend. "They're my thing." 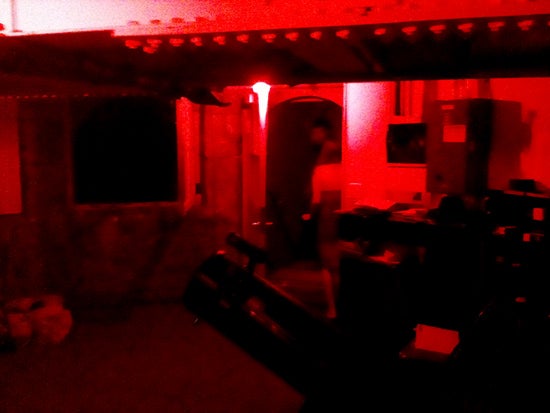 The doors open onto a hot, drab room that resembles a hospital waiting area. We climb two sets of hatched steel stairs, one straight, the other spiral. I feel as though I'm entering a secret chamber of Peters that few outsiders have ever seen. "Is this open to the public?" I ask my roommate, and he assures me it's OK for me to be here. We finally reach what appears to be the top. In front of me is a room bathed in the same red light that we saw walking over here. It reminds me of a cross between a nuclear submarine and a Victorian turret. I peer out the window and see Oberlin spread out below me.

From this new perspective, I notice a certain charm in the kitschy 60s architecture of King that I hadn't seen before. But I'm not here to look downwards. I climb one last narrow steel staircase and emerge in the dome of the Big Telescope (a 14" Meade LX 200, according to the observatory website). I can't see anyone's face, but a tall figure is leading a discussion on Jupiter, and he asks us what we know (it's um, a gas giant or something). I peer through the Big Telescope, and there it is: a white circle, surrounded by other smaller white circles. Fantastic.

My roommate has disappeared. I find him one level down from the dome, on the roof of Peters. The moon provides partial illumination as I walk around and take a look through the various telescopes set up to observe various astral points. People shift from telescope to telescope, chatting, laughing, and taking part in the collective enjoyment of Star Cluster M-something-or-other. The place has the feel of a crowd gathering in front of a concert that's about to start, but in this case the entertainment lasts all night. I wonder what kinds of people come to look at the stars. Of course there are math buffs, who delight in being able to predict the locations of planets billions of miles away using charts and figures. There are those people who can point to any constellation in the sky and recount the story (including regional variations). There's that guy who's here because he "gets extra credit for Astronomy class."

And then there are people like me, who don't really know why they're here, but come anyways. We all draw very different meanings from these balls of gas burning billions of miles away (or kings of the past, if you prefer), but there seems to be something universally fascinating about these atmospheric fireflies. I look at a close-up of the surface of the moon and realize I haven't checked my watch in a while. I also realize that I don't care.

I thank my roommate for bringing me and head back. As I climb down the steel stairs, I feel as though I've experienced one of those things that "everyone should do before they leave Oberlin!" - only, if I had gone with the expectation of it being that, it wouldn't have been. I pass back into the hospital waiting area where there's a crowd of people waiting to get in - apparently, the observatory is full to capacity. I'm about to take the elevator back down to ground level when I spot the girl from my dorm. I guess she didn't go dancing after all. She's staring at her phone and looks like she wants to get the hell out of here. I know I can't force her to "experience" the observatory (just as she can't force me to "experience" Latin Night at the 'Sco), but this doesn't stop me from trying. "It's worth the wait," I tell her, and disappear into the stairwell.

I, too, had the observatory experience during my first few weeks in Oberlin. I remember seeing the surface of the moon and being floored by how alien and interesting it looked through the telescope, despite being such a familiar object. A very Oberlin moment, that paradigm shift.

Great first post! I love the observatory. I remember one night right at the end of last semester they set up telescopes, and you could see Saturn through one of them, rings and all. It didn't look real, I honestly thought they'd put a slide at the end of the lens.

"As I climb down the steel stairs, I feel as though I've experienced one of those things that "everyone should do before they leave Oberlin!" - only, if I had gone with the expectation of it being that, it wouldn't have been."
VERY post-modern!! post-post in fact!!!

I didn't go to an observatory open hours til after I graduated. I seriously regret it not doing it sooner. I'm really glad you discovered it (by accident!) early!