A few weeks ago, I visited the Oberlin Alumni Association on a secret mission. As I was leaving, I noted a small squirrel plushie at the entrance, took a photo, and tweeted it with the following note:

What a good/bad idea that was. Immediately, several conversations simultaneously occurred asking where a sibling of this squirrel that was also cuddly and white could be purchased. It turns out the answer is right here in downtown Oberlin at the Carlyle Shop, a local flower and novelty shop.

I walked downtown the next afternoon, was ushered past squirrel ornaments and paperweights to an entire shelf of white squirrel plushies! Similar to my reaction to small children and animals, my voice pitch increased by an octave as I relayed my excitement to the sales person.

This squirrel and I had big plans. Bigger plans than the both of us put together.*

The next day, I opened up the (virtual) ballot to my Facebook and Twitter friends for name nominations. I received over a dozen name nominations, which I then turned over for online voting the next day. A few dozen votes (and several write-in names) later, Albus (nicknamed Albie) the squirrel was born. 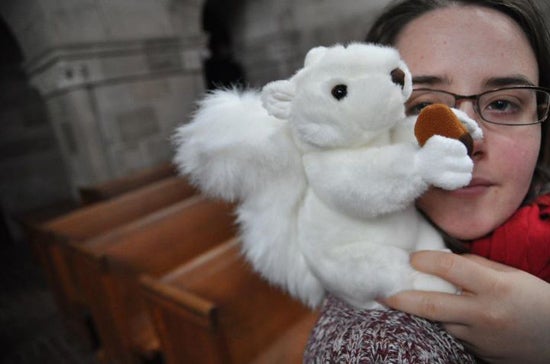 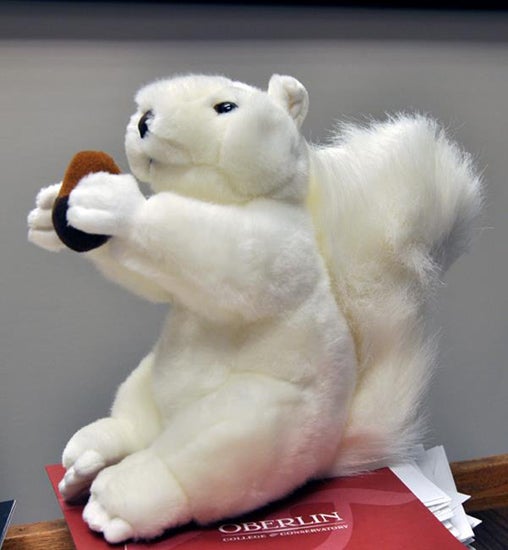 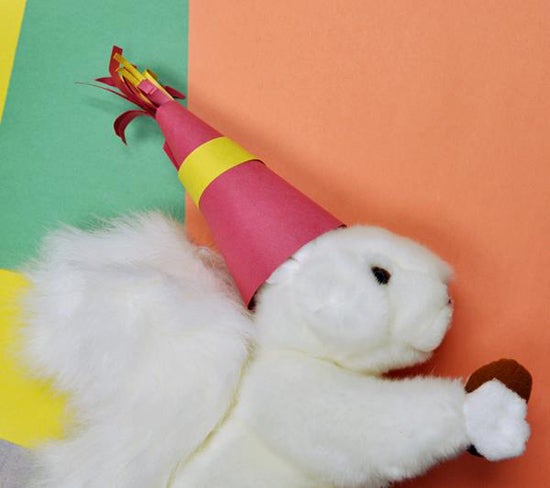 I posted the first photo on Facebook when asking for names, the second when I held the voting, the third when I announced that Albus the squirrel was finally named.

Albus promptly celebrated by wearing a party hat and became an impromptu movie star while accompanying a bunch of Obies in wishing Oberlin a very happy 178th birthday.

Look! All these Obies are so cool and they love Oberlin SO MUCH! They also love Albus. He got so many hugs during the making of this video.

While I am of the mindset that everyone should have at least one cuddly object with them when they come to college, what I didn't realize is that these plushies have just as big a draw with Obies outside of their own dorm rooms. Squirrels motivate us to do silly things. And our white squirrels just represent so many things we can't fully articulate that we love about this place: we love to frolic, we're unique, we stop foot traffic, we're cuddly, we're cute... the list goes on. To be noted: when Architecture in Helsinki played here in November, they were so stunned by our squirrels that they dedicated half their show to them (so cute!).

White squirrels appear to have become our unofficial mascot, and they've been popping up on Oberlin apparel and as part of many a formal and informal student group, including one of our newest ones, the Squirrel Brigade.

Wait, what? That sounds amazing, Ma'ayan! What's a Squirrel Brigade?

Only the best thing to ever happen to Oberlin! The Squirrel Brigade is a team of four super extremely excellent Obies that the Offices of Communications and Admissions have recruited to help usher in and excite incoming Oberlin classes. With the first round of admissions decisions headed to ED 1 kids (oh my goodness HI GUYS! Welcome to the family!) even as you read this post, the Squirrel Brigade is eagerly planning a number of activities to teach, inspire, and motivate the class of 2016 as they join the ranks of Obies.

As new '16 folks start to materialize, do say hello to the Squirrel Brigade (Alanna '13, Poon '15, Reid '14, and Silvia '15) and feel free to get in touch with them via email or on Facebook if you have any questions, comments, thoughts, ideas, or acorn recipes. They'll be drifting around the online world, offering their enthusiasm, creativity, and general acorns of wisdom wherever they see fit. They're great. Love them, cuddle them, smile at them, and feed them tater tots and they will respond in kind. (Am I referring to the squirrels or the Brigade? You decide :D)

* Albus and I have more adventures planned for the future. Just you wait.

How sad am I to not be able to be involved? SO SAD. However, I'm thrilled about the squirrels, the squirrel brigade, ED kids, applicants, Admissions, Communications, social media...well, you know how I roll. Excited about everything.

So fabulous! I'm looking forward to buying/adopting one of Albus' siblings!

You know what would be really really awesome? If you put one of these guys in a package and mailed it to an Obie studying abroad, who would take the requisite cute pictures, and then they could mail it to somebody else studying abroad, etc., etc.

Basically the idea is to generate the garden-gnome album from Ameile, but with Albus. (Also who doesn't love receiving packages?)

But seriously, things like what you just said: that's gonna happen. Plans are already in the works. (I'm glad I'm not the only one thinking this would be the BEST IDEA EVER.)

Have you seen the Oberlin white squirrel t-shirts at the Carlyle Shop? Truly sharp in black with white print. Lots of sizes.