Two months ago, Ma'ayan told me she'd heard that Architecture in Helsinki was going to be playing at the 'Sco. My reaction went a bit like this: 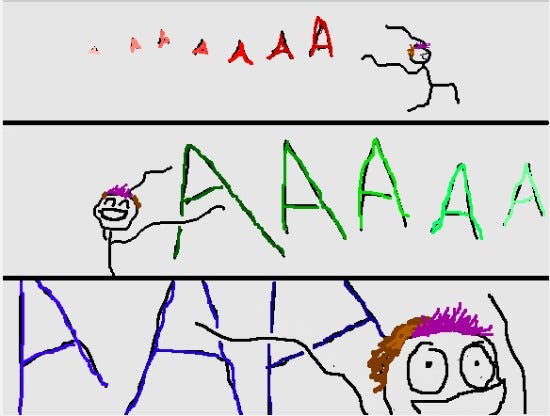 You think I'm joking. I'm really not. This is actually a bit of an understatement.

My first boyfriend got me their first album four years ago; my devotion to the guy waned, but my love for the group has only grown with time, so saying that this news excited me is a colossal understatement. I am, in fact, still ludicrously overjoyed, and will probably remain in a state of permanent, stupidly happy flip-out-ery for the rest of ever, so instead of trying to force two months of exuberance and two hours of show-induced bliss into words, I have illustrated the experience to the best of my ability. 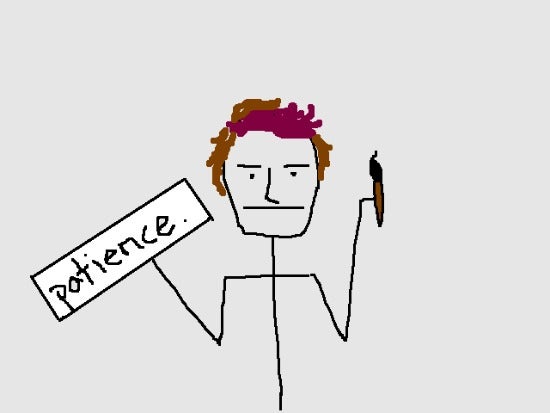 This is me, ready to doodle. (The paintbrush is figurative. The patience is not.)

A bit of explanation regarding the show itself: the openers started at nine. I got there at ten. AIH started at eleven thirty. It took me a good hour to finagle my way up to the stage until only one row of people separated me from the ground my beloved band would be standing on, but I made it. The 'Sco packed more and more people in. I was jostled, nudged, and boxed in until my absentminded dancing (Is it time yet? Is it time yet? Oh, the song ended, I should clap. Is it time now? No? How about now? Or right now? Now? . . .Now?) became nothing more than nodding and swaying with my arms folded up by my sides, begging-dog-style. 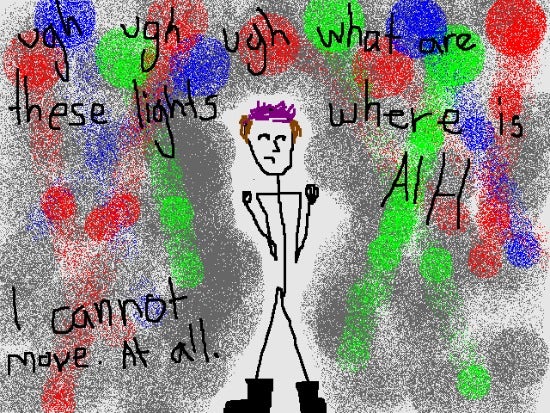 Just imagine that the space around me is crammed with bodies. I was too lazy to draw them.

In due time, of course, the openers packed up and AIH's equipment was unveiled. My level of excitement - as if that were even possible - took an asymptotically sharp turn upward. The 'Sco reached fever pitch just as the band members jogged onstage; a shrill and mighty scream arose from the crowd, like the embrace of a kraken that has been deprived far too long of ships and whales to chase. The Obies around me threw their fists up and began to jump like a sea that is being churned by said frenzied kraken - it was jump along or be crushed. My throat protested feebly at being treated like a chunk of meat being tenderized. Let's play a game, I thought to myself, is it possible for me to lose my voice in one hour?

Architecture in Helsinki started to play.

My voice died a swift and noble death.

To illustrate just how close I was to them, here's what the view was like when I looked straight ahead: 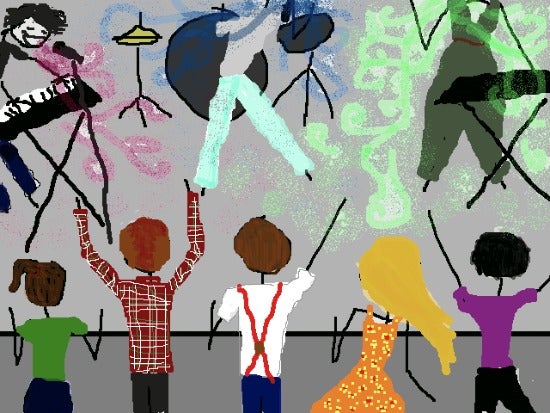 Ma'ayan is on the far left. She was at the VERY front.

And this is what I saw when I looked up just a tiny bit: 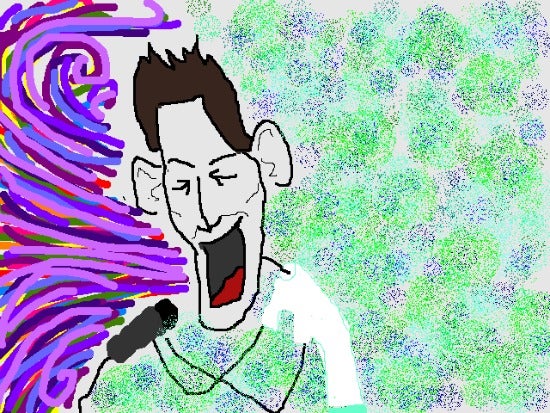 And when I looked up and to the right, there was Kellie Sutherland: 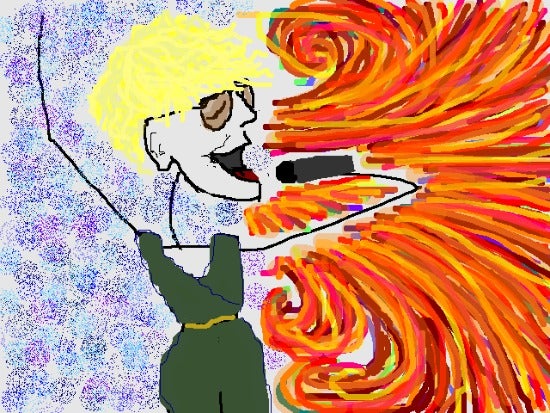 There were also four other people on the stage, but Cameron and Kellie were in the spotlight, being lead singers. In the interest of spreading the love, though, I also illustrated the others' contributions to the sweet and glorious aural ambrosia I ingested that night: 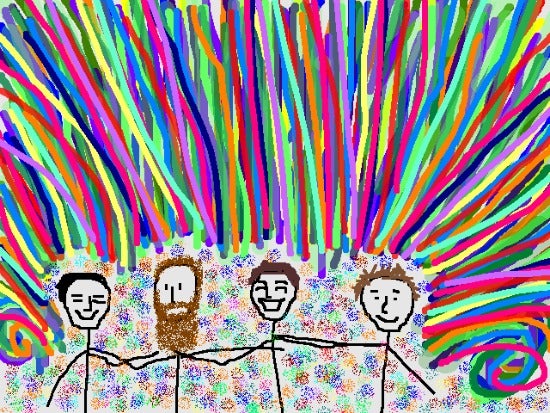 In sum - and I don't want to make any hasty judgments here - Oberlin combined with Architecture in Helsinki might just be the way to world peace, the end to world hunger, and the cure for cancer. Either that, or it's unicorns. 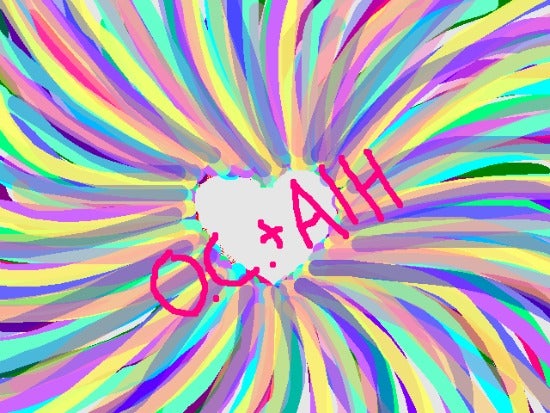 How do you even come up with the exact colors,those are such great colors!
Now that I have seen you draw these pictures on the computer, I vote for no more words, just pictures...this stuff takes forEVER and back! But you do hit it right on the nail, so for me, it is worth it.
Good self-portraits!

Yes, I was in the front row. Yes, it was the BEST CONCERT EVER.

It was brilliant. Just. AWESOME. You captured that energy excellently in this post. Everything was rainbows and albino squirrels.

Wow, all that sounds super great. I looked them up on Youtube after they were here, to see what I was missing. Now "Contact High" has been playing on a loop in my head for a week. It's actually probably for the best that I did not go, because I might not have survived such a crowded, noisy experience. But I am so glad you went, and that I can enjoy it vicariously through your amazing pictures. Rock on, Ida!

Anon: I'm glad I got it right! I had a hard time remembering the details. The fact that you commented on it makes me happy.

Everyone else: Thanks for the props! Love you too. :)

Also, Aries: NO U. (I wish our times in Oberlin had overlapped.)

This is great! Love the blog. I was at the concert too and I had only recently discovered Architecture in Helsinki but it was love at the first beat of my ear drum. The concert was great and they had a ton of passions and energy (as did the crowd). Great stuff. =] Ps. I LOVE you drawings.