Things I didn't expect from college: Moving in with the boyfriend.

My greatest fear -- more than falling, bees, neurodegenerative diseases and rabid dogs -- is commitment. I don't like it. It gives me the heebie-jeebies. So, this whole "moving in" thing is very, very odd. More odd is that... I like it. Of course, Yoshi and I have been dating on-and-off for near three years; at this point, we're accustomed to the other's peculiarities.

We met the first week of school. We had long conversations about language and politics, ending way late into the night. We could out-nerd each other: I was captain of the Academic Team; he won programming competitions. We had both done Mock Trial and taken as many AP's as we could. But he thought in ways I really hadn't considered before: he was an actual scientist, doing research in a lab for most of high school. He had a lot of well-placed confidence, but he was quiet with new groups of people.

I really didn't understand him. By fall break, I had a giant crush on him.

Each week, we both saw an improvised high school dramedy show. Sometimes, we sat next to each other. When we watched it, I sometimes took my gaze away from the actors to stare at his hands, outstretched behind him. I really wanted to hold them.

However, I had a pretty strong indication Yoshi in no way reciprocated my feelings. He invited me over to watch a movie in his room, "Rosencrantz & Guildenstern Are Dead." I interpreted this as: "I find you pretty and intelligent enough to enjoy a Stoppard film. Care to make out while listening to witty banter?"

Except he just wanted to watch the movie. When we were squiggled tight next to each other, staring at warring Shakespearean characters, there was no ... moment. We laughed together, but it wasn't... he didn't like me.

And then, he got a girlfriend, who was pretty, charming, witty, stylish and talented. She could write, and take gorgeous photographs. She was from LA and liked foreign movies I hadn't heard of. She understood orchestral music and had a really glowing smile.

There was another boy floating around, who liked me, who I liked as well, who I decided to date. He was a fifth year Computer Science/Organ Performance major who was really good at chess. He was 6'9''. I, at a meager 5'11'', had to stand on my tip-toes to kiss him. It was cool. He was a lot older and actually knew what he wanted and where he was.

We dated for a few months before deciding that a five year age difference was too big of a hurdle. Alas.

I went back to failing-to-woo Yoshi, who was still with his gorgeous girlfriend. But a week after Valentine's, they broke up.

For the next few weeks, I lingered around Yoshi, and convinced him that I would involve the least commitment. "Commitment is for psychos," we agreed, and decided on an open relationship. Which continued, uninterrupted, for over two years.

Together, we had adventures. He taught me how to stilt. We wrote budgets together for circus. Whenever I fell asleep in public, he found me a blanket. After I got lice, he shaved my head. He taught me modern dance routines, and studied with me in Abnormal Psych. I went to his fencing tournaments; he went to my choir concerts. We made out in computer labs; we found giant bugs together. I spent a summer with him, getting a job at a Smoothie King while he did research at Southwestern after my illustrious internship fell through. When we spent time away, for Christmas or Thanksgiving, it hurt -- I spent a painful amount of money on phone card when I spent my Winter Term in Mexico. I saw him nearly every day, for a very long time. 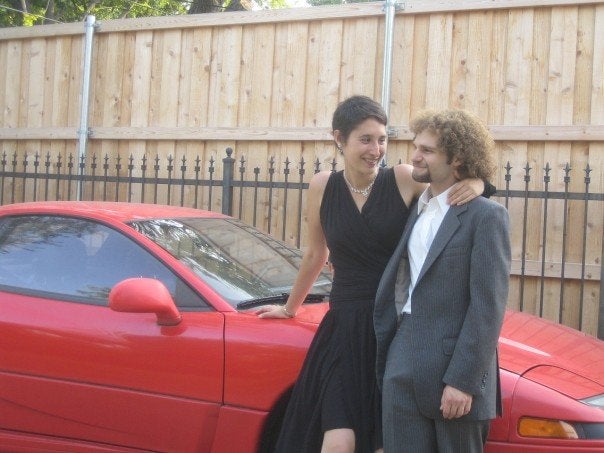 Yoshi and I, before going to a shwanky party. Yeah, we're pretty 80's-tastic.

Around year two, things got harder. We're both busy people, and our schedules didn't align. We saw each other rarely, and didn't make time for one another. It wasn't working and for few months, we did a lot of arguing. During Commencement week, we decided to take a break. I don't remember anything from that week except that Agave makes great Mohitos. The Feve serves awesome White Russians. Gibson's sells good cheap sherry. It was a sad time.

We saw each other over the summer, spending July 4th together. It was awkward, but yet, it... wasn't. We were still Aries and Yoshi. We had spent a summer together. For over a year, I had woken up next to him and gone to sleep the same way. We had seen concerts together. Most significant things that had happened to me involved him in an odd tangential way.

And then, it was Senior Year, and we were dating different, excellent, attractive people. And then, at the end of the semester, we weren't dating them anymore. I moved into an open bedroom in Yoshi's Pleasant Street house, two weeks before finals.

I've put up my posters, I've started attacking mildew with a strangely Stepford-like insistence. We work in the kitchen; the table is strewn with homework over the place setting. I still become unnerved when Yoshi watches me do things over my shoulder, like make sandwiches or write this entry (Hi, babe. That's creepy). But it works. I have the best housemate in the world.

Haha. For the record, I don't actually understand orchestral music. :)

Also, that is the sort of photo I want to make a jigsaw out of because it's too cute. The only things I would add are a few Photoshopped kittens and daisies.

Forget about valentines day. I mean i know everyone wants to find some love, but how can we be so selfish when an innocent slice of pizza is locked behind bars. You don't believe me check this out. It is no joke. www.freepizzaa.blogspot.com

I'll say this: though I'm bitter, jaded, and sans significant other, I still managed to find this story not sappy.

I can't even come up with something mean to say or think like I normally do when I see people in happy relationships...

Damn you, Aries, damn you for writing something even my callous heart found sweet.