Weekend before last, my friend Clay flew in to see me on his way home for spring break, and I took the opportunity to show him some of my favorite people, places, and things in Oberlin. What follows is an account of our adventures, starting with his arrival Saturday evening.

I met him at the airport with my friend and driver Joel, and with the sign I'd promised to make (because one must never forget to have a sign if one is to pick someone up from an airport). 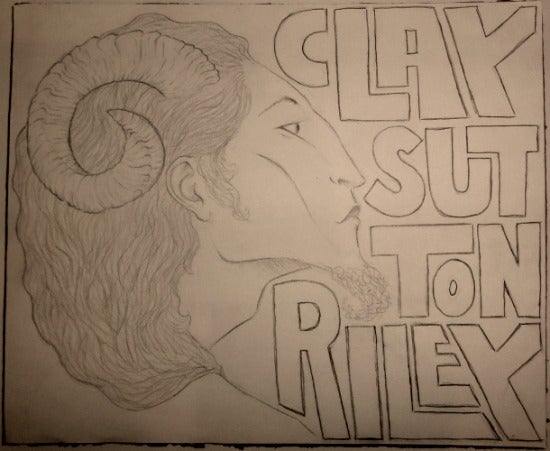 Pan is just a nickname I have for Clay - he doesn't actually have horns in real life. Sorry. I know it's disappointing.

Once Clay was actually on campus and had been introduced to my room, bike, and friends, we dug into a delicious cheese fondue that my roommate had consented to prepare for the occasion. (Mad props to her, and to my unofficial other roommate for baking the baguettes to go with it!) After devouring the fondue - hugely delicious, tiny amount - I set off with Clay and Joel to find a real dinner. On the way, we talked about how quiet Oberlin nights are compared to Boston (where Clay goes to school) and how incredibly adorable downtown Oberlin is. We settled on eating at the appropriately quiet and adorable Aladdin's. 1

It was beyond delicious. Our near-starvation may have had something to do with the dance parties our taste buds were throwing upon meeting the food in Aladdin's, but I promise, that place is heavenly. If you get the chance, eat there. Do it. We stayed for an hour and a half, munching and laughing and marinating in happiness. When we finally did waddle out, it was with hands cradling our bellies, hoping against hope we hadn't just brought down horrific stomachaches upon ourselves.

Strolling past Gibson's 2 on the way home, we spied a small cave hollowed out of a pile of snow on the sidewalk. Clay maneuvered himself into it backwards with great difficulty, so of course Joel and I ditched him, giggling evilly as he struggled to pull himself back out. Some moments later, after we'd passed a group of girls walking in the opposite direction, we heard a roar and saw Clay erupt vertically out of the cave, showering the sidewalk in chunks of snow like a frozen volcano. The girls were shocked into immediate, hysterical laughter. Clay, realizing he'd had an unwitting audience, hurried over to where Joel and I had collapsed against each other in our own hysteric laughterfest. He later confessed that it had been one of his favorite moments in Oberlin.

We'd meant to go sledding that night, but our stomachs forbade us from moving too much, so we spent the evening chatting instead. Clay slept on my floor on two fuzzy blankets, two stuffed animals, two pillows, and one sleeping bag - but only after we'd skype-chatted each other into fits of barely-held-in guffaws with the occasional gopher-like perking up to make sure we weren't disturbing my roommate's slumber.

I'd arranged for us to meet Griff at Keep for Sunday brunch the next morning. This, too, turned out to be an enormous gustatory success. There were spelt/wheat/cheese biscuits, fried eggs, and a lentil stew that everyone fell in love with, even the people who purportedly disliked lentils. We ate our fill, ambled over to the Free Store 3 (which, we found, is closed on Sundays), and somehow wound up exploring the joys of Mudd 4. Specifically, the womb chairs. So much joy.

Our next stop was the 'Sco 5, to see Jerusalem of Gold. Publicized as a hip-hop musical, it was a work written by Kendell Pinkney (OC '10), it was an account of his year studying abroad in Israel. The writer's note in the program elaborates: "Upon returning to the States, I tried to give voice to my experience, but words failed me. Since I couldn't find the words, in true Oberlin style, I decided to create a musical! Please, enjoy." And enjoy we did. It was a particularly fitting show, as Clay is going on a trip to Israel this summer and the musical brought up a lot of points that he hadn't considered yet, such as "conflict existing in Israel among its constituent pieces that has nothing to do with Palestine" (it makes sense, but it's easy to forget). I was particularly struck by the way in which all of the separate narratives of his Israeli friends wove together a number of heavy issues in their stories, which themselves wove together to form the overarching storyline of Pinkney's experience.

After a hurried dinner in Dascomb 6, a posse of friends and I took Clay to tumbling and introduced him to all of the incredible people there. He had basically the same experience I did the first time I went (that is to say, he fell madly in love with it), and I started working on front flips. Ninety minutes later, the effects of throwing our bodies around relentlessly started to make themselves known. First, the appetites we'd worked up called for Decafe 7 smoothies and then some staring at pastries in Gibson's as only college students with money in hand and a glass case full of confectionery in front of them can. Second, it became evident that simultaneous showers were also necessary, so we trekked to the bathroom and belted out some tunes while we got clean. Finally, exhausted, we opted to sleep early.

Monday, we had until five o'clock to cram in more Oberlin-specific awesomeness. Our first stop was the vintage/antique store Ratsy's 8, where we tried on silly clothes and agonized over which glass bottles we wanted most. 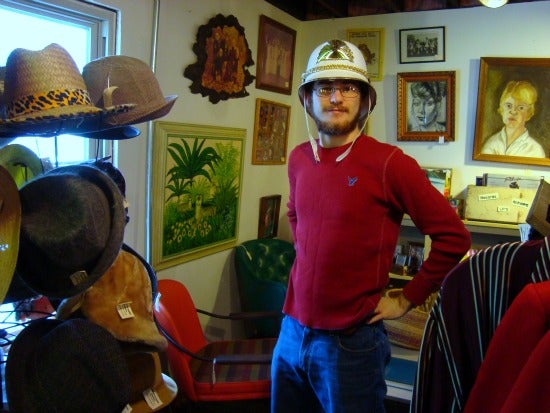 Clay shares my love of excellent and silly hats. 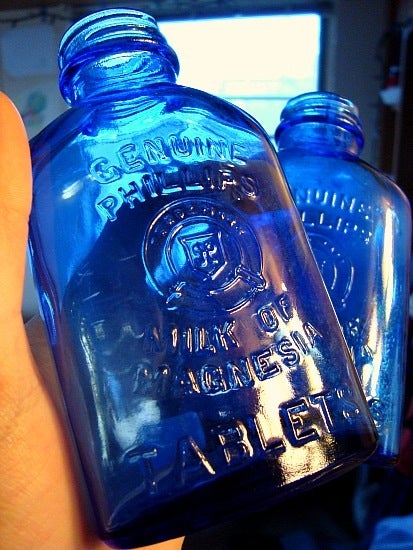 The bottles say "Genuine Phillips Milk of Magnesia Tablets" on them (but generally they hold tea, not pills). It was love at first sight.

We walked home via a shortcut that took us around the back of the downtown corner, which has some great murals painted on it that I wanted Clay to see. 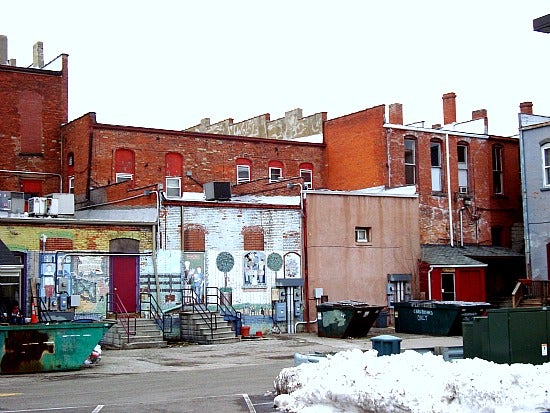 Not the best picture, but I think it's charming.

Gibson's sucked us in again for baked goods - I swear that place is like a black hole of tasty, tasty doom for your money - whereupon we realized we hadn't had any meals yet that day, so we left with some milk and eggs as well for French toast purposes. When we ran out of bread for the toast, I used the leftover eggs to make omelettes, which were received to high acclaim - apparently they were pretty? Omelettes are basically the only thing I can be trusted not to screw up, kitchenwise. 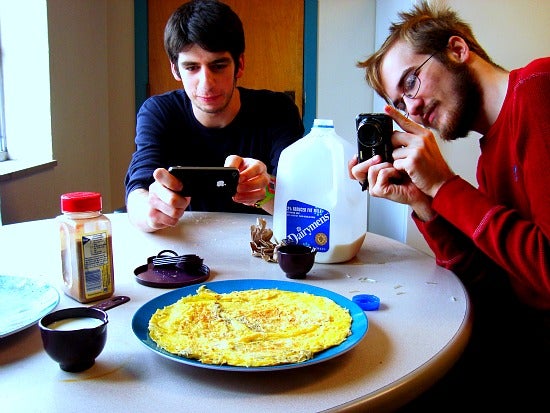 That about wrapped up our escapades, save for a music swap and raucous car ride to the airport. I'm quite pleased with the assortment of things I got to show Clay, but there was also so much more I wish he could have seen. We didn't get to go to my favorite practice rooms in the Conservatory (so many Steinways!) or the Free Store; he didn't sit in on any of my classes; there was no contra dance during his stay. I'll just have to convince him to come back. I don't think it will be hard.

2. Gibson's Bakery provides Obies with bread, pastries, and an assortment of groceries. Me, I often get so caught up in the bread and pastries that I forget about the entire second half of the store.

3. The Free Store is a room in the basement of Asia House where students drop off unwanted things - clothes, accessories, furniture, knickknacks - and other students pick them up. It's like swapping, but anonymous and large-scale. It's like shopping, but free. It's awesome.

4. Mudd Center houses the Main Library, in turn houses a café, a sun deck, and twelve womb chairs. Oh, and books. Patrick wrote a really great blog post on it, if you'd like to know more!

5. The 'Sco, whose real name is The Dionysus Disco, is usually full of crowds of dancing Obies (and sometimes live bands) - student DJs and decade-themed nights are more common there than musicals.

6. I live in Dascomb. Conveniently, it combines first-year dorm living with a cafeteria seemingly meant for hobbits; Dascomb serves breakfast, continental breakfast, lunch, dinner, lighter fare, and fourth meal. Elevensies, anyone? Honestly, I once went an entire day without leaving the building at all.

7. Decafe, located across the hall from the 'Sco and across the lawn from Dascomb, is known for its made-to-order smoothies. It also offers sandwiches and a variety of snacking essentials, all at exorbitant prices. By the way, it's pronounced DAY-calf.

8. Ratsy's is like that huge chest in the attic that you like to rummage around in. Ma'ayan pointed me there when I asked how I could stave off boredom during Fall Break, and these days I visit regularly to play dress-up and blow off steam.

I'm feeling the discursive footnotes in this post so hard.

I assure you, you will have no trouble convincing me to return!

Will: Thanks, yo! I couldn't think of a better way to make sure people weren't completely lost when I was naming places around campus (and, yes, I'm totally showing off my newfound footnote skills).

Fact: I should start making beautiful signs to pick up friends at airports.

We had a collection of those milk of magnesia bottles in my house when I was growing up. They captured the light so beautifully. I might have to get one at Ratsy's and make my house feel more like old home.

I need those milk of magnesia bottles in my life.

I think we actually ended up leaving the bigger milk of magnesia bottle there...

By the way, Kendell used Jerusalem of Gold as his application to NYU Tisch Graduate School of Musical Theater Writing, and he got in!

Also love the footnotes. And Ratsy's.