I know Elizabeth already gave a nice narrative about the decision letters being mailed out, but I thought you might enjoy seeing some pictures from our little celebration! For some reason the person in the office who has never owned a camera has been designated the "camera guy," so please keep that in mind when noticing my extreme lack of picture-taking skills.

The first batch of letters make their way to the truck. 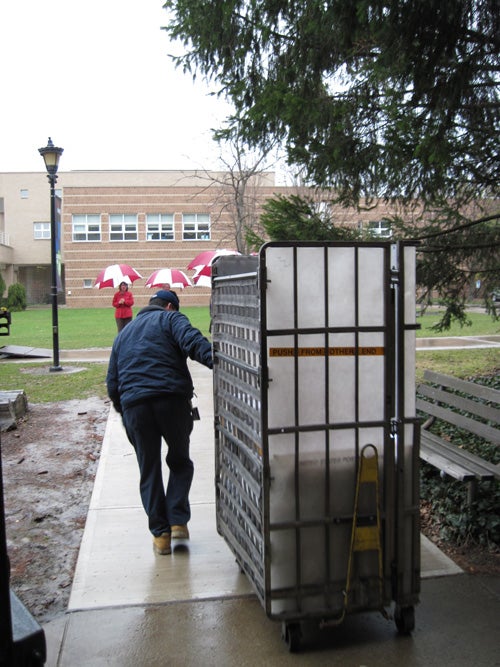 Debra waves to the camera. It was cold and rainy, but the nice thing about being the camera guy is the zoom feature = gets to stand in doorway and still shoot. 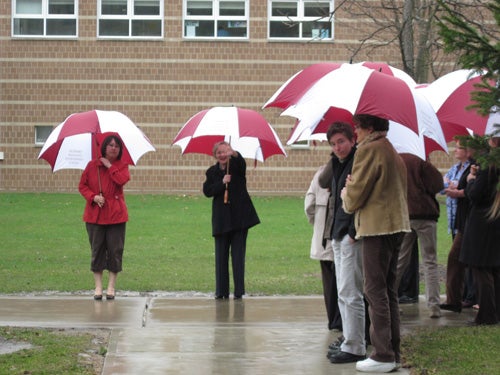 It's pretty much a rule: take a group of pictures and at least one shot will have someone whose eyes are closed. 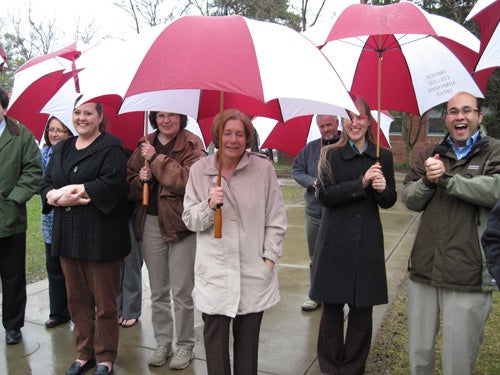 Into the truck they go! 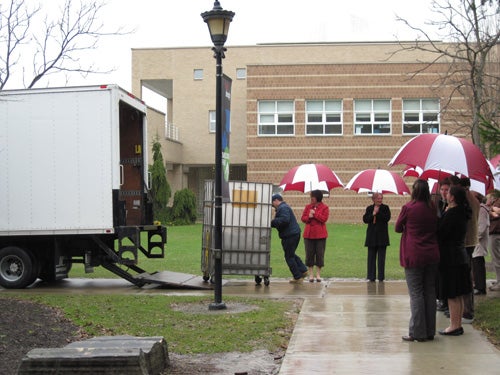 Still going in that truck... 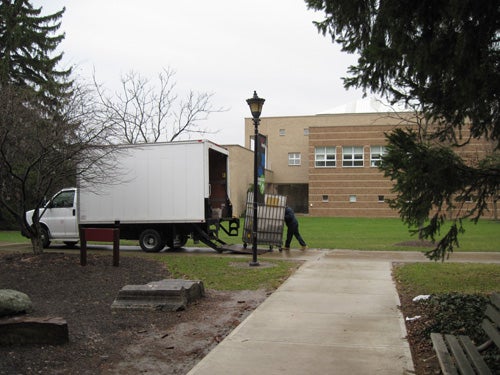 If you haven't realized yet, there was a truck involved. 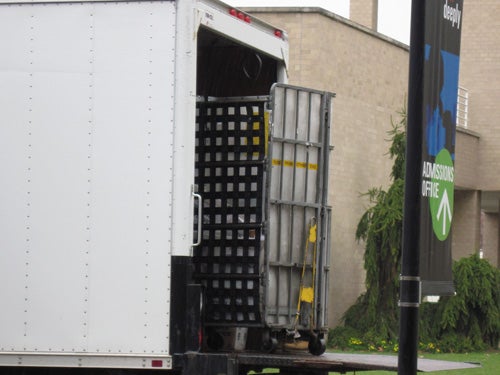 Even though we were getting wet, it was worth it. 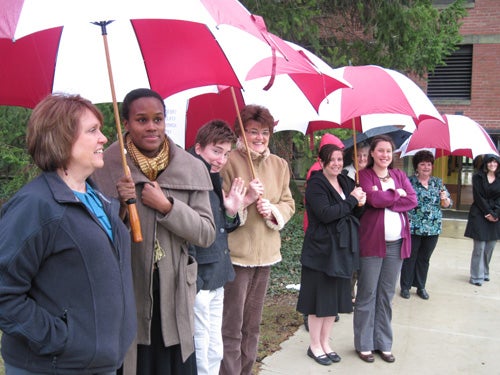 Most of us know how to use umbrellas. Some of us had to learn the hard way *cough* Chuck. 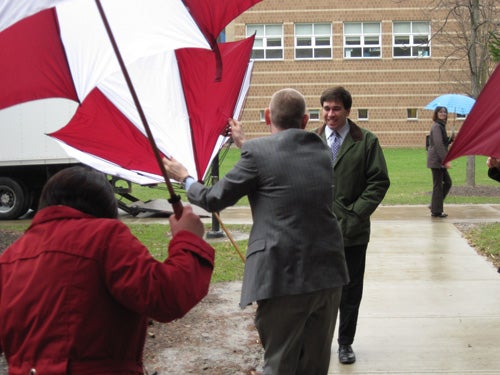 It takes a village to teach someone how to use an umbrella. 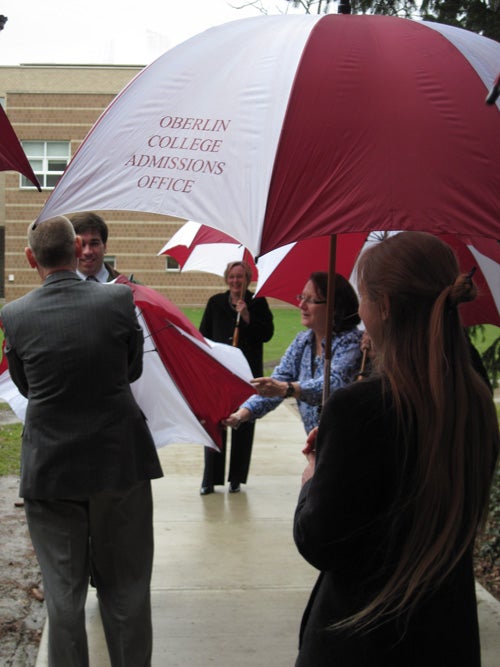 Eventually, the crisis was averted. 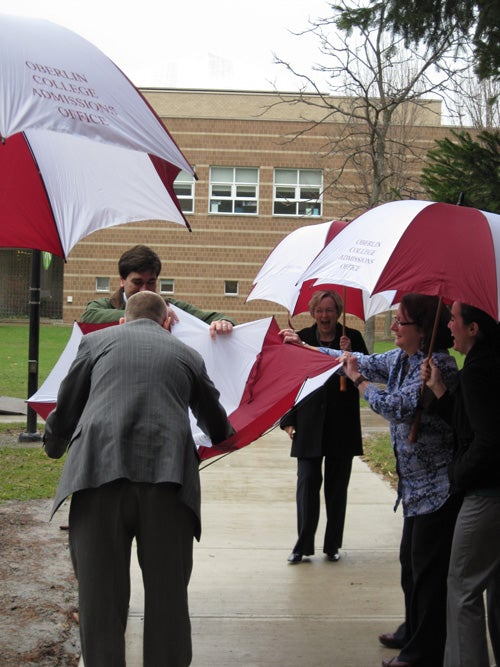 And eventually we all got cold. 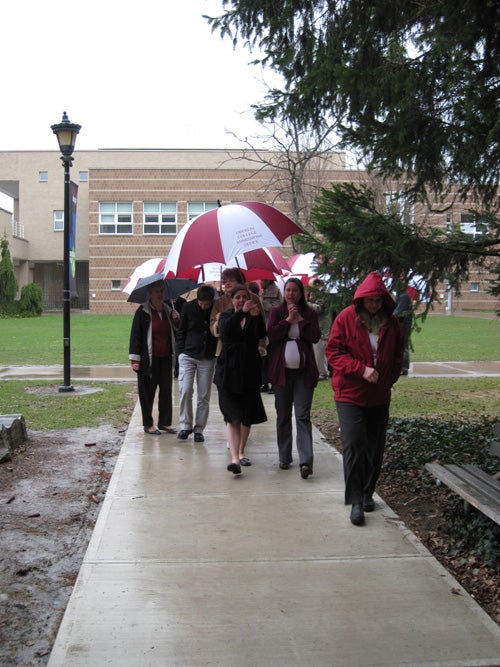 Nothing warms you up better or declares a celebration better than some bubbly. 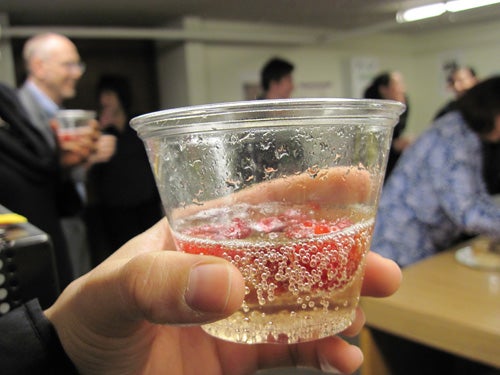 It was a bittersweet toast, however, as Tom lost a pair of glasses from the poorly controlled cork explosion that occurred moments after this picture. 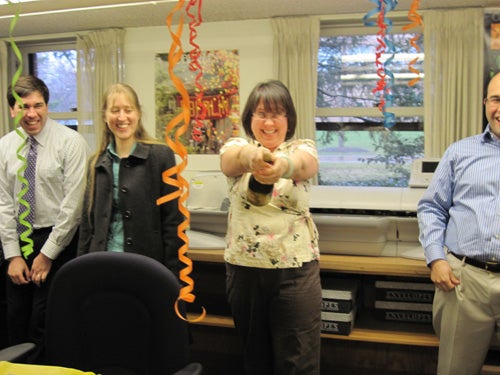 You guys are so witty at Oberlin! I hope my daughter was accepted!!

What is the priority of what's weighted in an admission decision? Is the live audition not the top factor in decisions?

omg, Kris looks so cute in that picture! Tell her I say hi and to email me when she gets a chance ASAP.

my email address is srpchess@gmail.com

Thanks for the pics, Jesse - it's almost like I was there waving to the truck:)

Wittiness is a necessity in this job in order to keep your sanity.

Dylan, that is quite the topic, I could write (and maybe will now) an entire blog on that. Did you apply to the College and/or the Conservatory? If you're applying as music major in the Conservatory, then the audition is the most important aspect of the application. If you're applying to the College of Arts and Sciences (not a music major), then we are more heavily concerned with your high school performance, test scores, extra-curriculars, etc. Feel free to contact the office and discuss more in detail.

Leslie, you almost were there waving to the truck, except the skype seemed to have cut off your arms :)

? Perhaps the sole criteria for admission should be whether or not one can properly wield an umbrella.

Perhaps at least one criteria for being an admissions counselor is whether or not you can properly wield an umbrella.

Do you guys use the Writing section of the SAT? I had good scores on the Critical Reading and Math but my Writing sucked.

Keep in mind that the writing score is only one small part of the big picture, and that you still have plenty of time to take the test again and try to improve. We will take the highest subset scores of all the times you take the SAT.

Was there a truck involved? I really couldn't tell.

Hiya! I'm Paloma. I just recently discovered Oberlin and it really seems like an amazing place. I was wondering who the admissions rep for Texas was (DeBakey High School in Houston!) and if there is a link to some sort of calender saying when/if they will be visiting the city soon.

I also had a couple of other questions, is there an email address so I can contact someone directly?

Have an orange day! (It's a game I play with my friends. Try to pick out everything orange you see!)

How did I end up in Ohio (and why'd I stick around)?

Ryan Dearon
This is the story of how I found myself amongst the cornfields of Ohio, two miles from an alpaca farm.

Cora K. Hasegawa
Throughout this year, I have learned a lot about the college selection process.

Cora K. Hasegawa
You should pick a college that will help you become the person you want to be in four years.
View most recent blog entries