I was thinking about last year a while ago. I graduated in 2007, and so I should be a sophomore, but I took last year off. I took a gap year. I don't know how much I like either of those phrases. I didn't really take a year off, like sit on the couch for a year, meaning to get something done but not actually doing it, like when you take a day off. But did I take a Gap Year? Did I pay 65 dollars for a colorful sweater and pair it with a well cut pair of chinos? Did I become inspi(red)™? No, not a Gap year. Although I do appreciate their jeans and their soft T shirts, I like this place in my hometown called Leo's much better. It's a vintage clothing store, but like real vintage, not just used clothes. An entire rack of tight, high-waisted bell bottoms. Suits with either skinny skinny lapels, or massive lapels, suit coats known in parts of South America as 'Chaqueta de la Muerta,' with fringe. They have a velvet Last Supper hanging above the stairs leading to the exit. I'm serious. 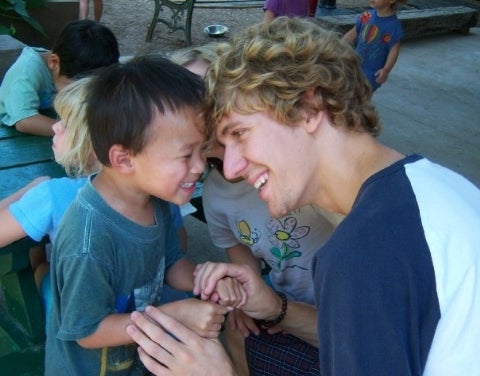 A picture from last year with a boy named Ethan my friend recently put up on Facebook (the picture, not Ethan). If I recall correctly, he bit me not twenty seconds after this picture was taken. You'll notice I have a pretty good grip on his hands, I just forgot about those tiny little teeth.

Velvet Last Suppers aside, I really think last year was good for me. As a senior in high school I knew close to nothing about applying to college until after the whole thing was over with. I was not interested in Early Decision, especially since I had no idea what kind of school I wanted to go to or really how to get there. I had to pay for every college I was applying to, I didn't like all of the ones I had visited, I didn't even think tours helped that much, since a half hour stroll through some quads doesn't really give you a sense of how it would be to live somewhere, my mind was all over the place. November to January my senior year are pretty much a haze.

The second time around, I knew to get those letters of rec from teachers at least a week before they were due, I re-took the ACT, and I even had a decent essay that I took the time to write, edit, re-write, and send in early. God, I hate it when teacher-people are right about that kind of crap. You really should get all these forms, letters, scores, and stuff in on time. I got lucky my senior year when I missed a deadline for financial aid and called the Carleton financial aid office in a panic (Carleton was the school I was headed to as of graduation). Schools don't have to be flexible. They're more than happy not to read your application if you have stuff late or missing. It sucks, but so does reading a gillion (approx. number of applicants to Oberlin last year = 1.2 gillion) applications and picking who gets to come to your super-progressive-highly-selective college.

After a few months at a college following an awesome gap year, I'm quite pleased with how all of this (my life for the last 1-2 years) has worked out. I'm not saying I recommend it, but applying once, getting really disappointed, then having a second time around was such a better experience.