As a rule, I try to avoid soaking in sicky-sweet pools of sentimentality (diabetes does, after all, run in my family), but when I talk about Thanksgivings at Fairkid I can't help but get that soft-eyed, distant-smile expression that means I've departed for that Lisa Frank horror-land of happy candy clouds and rainbow koalas. We'll see if I can keep the syrup levels in check today.

First things first: I started eating in Fairchild co-op back back when I was a wee sophomore.* I came there from living and eating in Harkness co-op my first year. Harkness, I should say, was a wonderful place in its own way, a community full of people with convictions and visions of how to better the world around them. But it was at times also a bit much for me, everyone so rambunctious and constantly active and willing to argue at length for what they believe in. For someone like me who gets a bit nervous around crowds and loud noises and who gets exhausted whenever she tries to argue politics, it got to be a bit stressful over the course of a year.

My second year, the OSCA lottery landed me in Fairkid, the other vegetarian/vegan co-op on campus, and my heavens what a change! Just 60-some members instead of 110, for starters, and everyone seemed just a bit quieter for not having to shout to hear themselves. So this was where OSCA's quirky introverts had been hiding! People like me who fold paper cranes for fun and carry around unlikely reading material and who care deeply about the ethics of food and of how their actions affect everyone else but for pete's sake don't want to yell about it. After one semester, I knew I was home. I can say without a doubt that for three years, Fairkid has been my second family. And I mean 'family' in all the good and bad senses of the word: eating with the same people every day binds you to them, you become close just in that act of sharing food. Which isn't to say you'll necessarily like all of them. There have been occasions when I've had to roll my eyes and keep my mouth shut, but even then I've felt that strange, persistent affection usually reserved for siblings, that goodwill born just from knowing a person so well.

Now to Thanksgiving in Oberlin, which had been my original intent in posting today:

I'm always baffled by the number of people who flee campus for the four-day Thanksgiving break. It seems like a hassle for so little actual time at home. I know if I were to ask my parents about going home for the break, they'd laugh and direct me to lists of current airfares for round-trip flights from Cleveland to Denver and back. $400 for a weekend? Touché, Mom and Dad. So I stay here for this and all breaks except Christmas and summer.

The past couple of Thanksgivings I've spent with the small contingent of Fairkidders from places like Seattle or California or Romania that are also outside the radius of easy home-comings. Maybe six or seven of us will get together and figure out a meal plan, each claiming a dish to make. I like to call my friend Carrie the Pie Maven because she is, in fact, a pie maven, and can crank out vegan pumpkin and maple-pecan pies (from scratch, to be sure!) with astonishing finesse: 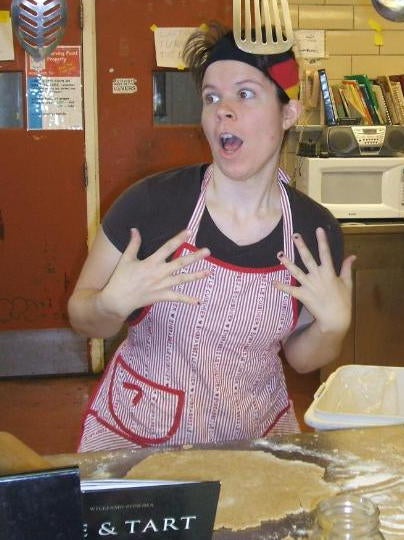 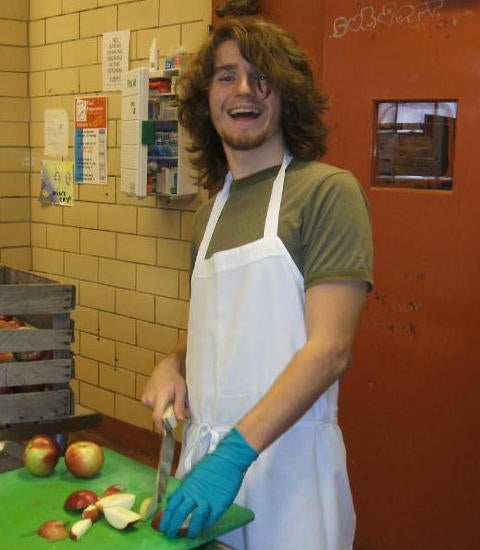 Sam, inconceivably happy in his apple-chopping 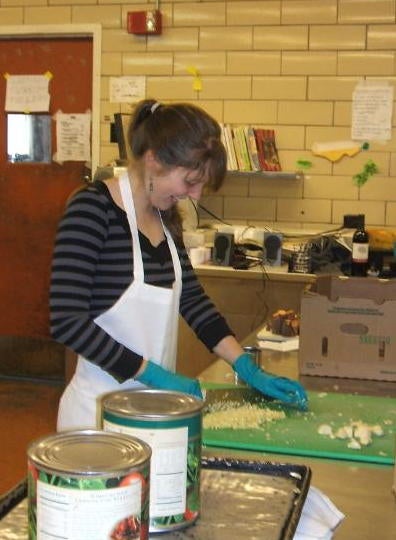 Sundari, conceivably happy in her garlic-mincing 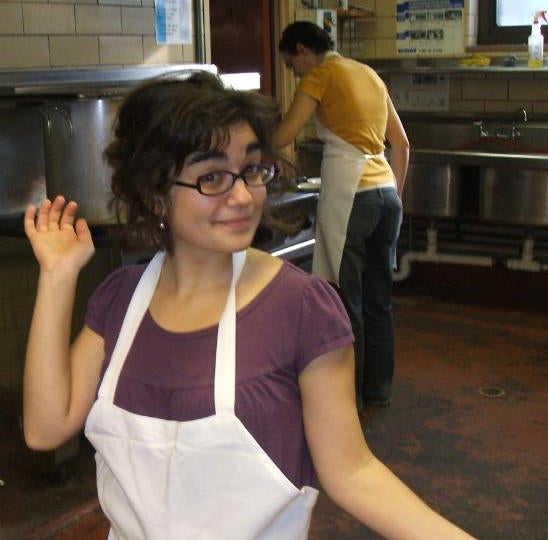 Amanda. The winsome tart in the back is me. 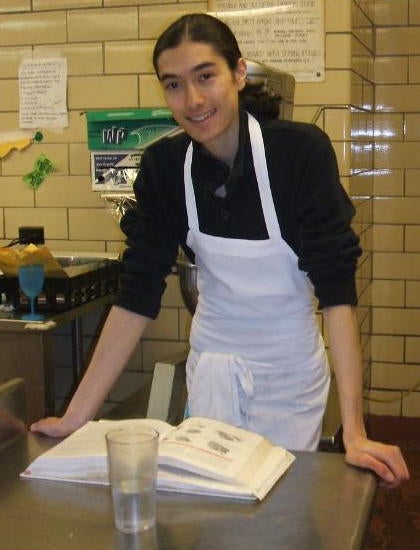 I've learned a thing or two about tofu since coming here. I can transform a livid, flavorless brick into something that, if not marriageable, is at least attractive and has some personality. Add to my garlic and white wine marinated creation contributions of lemon poppyseed cake, spanakopita, falafel, hummus, roasted sweet potatoes, stuffing, cranberry-applesauce, ASPARAGUS!, hot cider, and an undrinkable $3 bottle of red wine ("hints of pomegranate" my eye), and I'd say the ten or twelve of us who sat down together actually had something real to gather around.

I explained the game of Slack-Jaw (think staring contest+open mouth), we watched "Harold and Maude," and after discovering a partially complete jigsaw puzzle in the lounge I ceased all social interaction and stayed up until 1 a.m. feverishly putting pieces of cardboard in their rightful places. So I'm calling the evening a complete success.

Well, that wasn't so sugary, now, was it? High five, self.

*I'm actually pretty sure that I've remained the same dimensions since 8th grade, so when I say "wee" I mean it in a more figurative sense.

i'm delighted i stumbled across this, or else i might never have remembered the epic game of slack-jaw. good times!!

This is wonderful to see. As a proud former Fairkid (and Miss Fairchild '98), I salute you!