It was about the time I turned 15, and my father asked me to put on water to boil for tea, that I realized I didn't know the first thing about cooking. I had been washing dishes for a few years, and my role up to that point was almost entirely limited to that--disposing of already-cooked food. In fact, I can probably count the number of times that I made scrambled eggs--assisted by my father--over the course of my adolescence. Inherent in his request there was a paradox. My father, a short-order cook for many years, and my mother, a great improviser in her own right, had given birth to a son who could barely operate a stove. The only reason that I could come up with was that my parents, while I was still in the womb, had snatched up even the most basic genetic material necessary to allow me to create a meal and decided to lavish it on their imagined third child (my younger sister is no whiz in the kitchen either). When I went to college, it seemed utterly fantastic that I would be able to put the resources there to any grand culinary endeavors.

Like most college students, I spent my first year at Oberlin eating under the campus meal plan. Though oft-criticized, the food was fine by my standards. I was more than willing to overlook overcooked meat and bland vegetables with the understanding that I could eat as much of it as I wanted. I even reprised my role as dishwasher, taking a campus job at the dining hall cleaning off plates, shuffling utensils, and wiping down tables three nights a week. It was only near the end of that year that I began to consider other options. In many ways, my dining community was wearing thin--the insta-friends I had made during campus orientation were either drifting or becoming obtuse, and the anonymous guise of the cafeteria made it a lonely place to dine.

I had heard about the extensive co-op network at Oberlin prior to going. In fact, it was even one of the reasons I decided to enroll--not because I thought I would be involved--but simply as a byproduct of my first visit. It was then that three co-opers, wearing aprons and brandishing spatulas, warmly approached my tour group and offered us a tray of chocolate-chip cookies, fresh from the oven. I was immediately sold on the school. Boasting nine co-ops and encompassing almost a quarter of the student body, the Oberlin Student Cooperative Association (OSCA) is one of the more unique things about Oberlin.

As a result of campus involvement, I met a couple of upperclassmen who ate in Third World Co-op (TWC), one of only two co-ops that require an application. I settled on it because I appreciated its mission statement and the community it strives to achieve. Founded as a space primarily for marginalized peoples--students of color, LGBTQ, low-income, first-generation, and international students--it promotes coalition building and dialogue among students of diverse backgrounds. 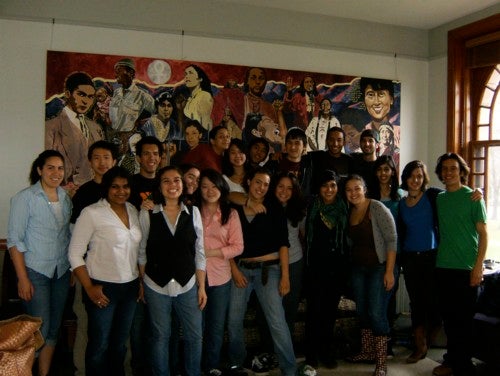 I didn't quite know what to expect when I joined OSCA. Entirely run by students, its members are expected to do all of the cooking, cleaning, food buying, recycling, composting, and administrative organization for the various co-ops, each responsible for working a certain number of hours during the week. I spent the entire first semester in the co-op fulfilling my hours with crews, those times reserved strictly for cleaning after meals. The first time I signed up to cook, someone may well have confused me for having a panic attack--sweaty hands, a racing heartbeat, and an unshakeable look of terror. How could I be expected to cook for thirty people when I had scarcely ever cooked for myself? Thankfully, there were senior members who talked me through the best ways to peel garlic, fry potatoes, and make an omelet. Never would I have imagined that a group of students could be efficient and capable enough to orchestrate what functioned like a self-contained dining hall.

I daresay that the food in the co-op is fabulous. Necessitated by dietary restrictions and cost, our diet is low in meat but still high in protein, using a variety of other foods--beans, eggs, tofu, and quinoa--as substitutes. Almost all of it is locally-grown, a product of Ohio farms and orchards where we receive weekly shipments of produce and dairy in gallon and crate-sized containers. Recipes are used, but sparingly, with most members dependent on a combination of quick wits and creativity to make their meals. I quickly dashed the idea of recipes and measurements in my second go, learning to approximate how much food it takes to feed the co-op and how much time it takes to make it. 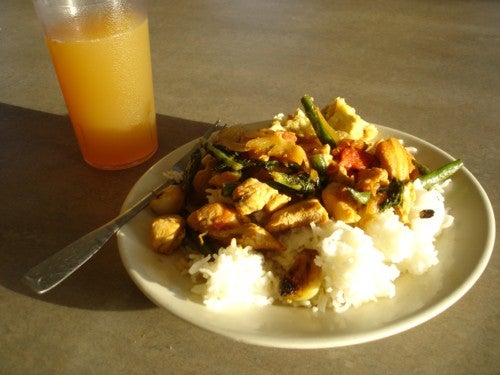 Third World Co-op is truly my home on campus. As a member for three years, the people that I eat with now include some of my closest friends. In the co-op, I know everyone's name and everyone knows mine. We don't just cook--we create, experiment, laugh, love, and dance, all while blasting Mariah Carey's "Heartbreaker" over the hum of sizzling stove tops and ovens.

During the summer before my junior year--just one year after joining the co-op--I decided to dredge up a past I had not confronted since high school. I wanted to cook dinner for my father. Not accustomed to the pre-ordained selection of food in co-op fridges, I went grocery shopping, parsing out all the ingredients I would need. The food didn't turn out as well as I had expected. I added a little too much water to the rice, the onions were underdone, and it took a couple of tries to completely master the art of tempura. Even still, I could sense it in my father's face--a smile suffused under his chewing of those first bites. After we finished eating, he even offered to do the dishes.