Thirteen days until school starts! (Holy smokes, that is SO close.) Anytime anyone says that, though, I don't think of school - all I can think of is my friends. If there's one thing I've been looking forward to for the past month, it's been having all my mates back in one place.

One year ago, when I came to Oberlin, I expected to make fantastic friends. Maybe not right away, and maybe not easily, but I expected to spend the next four years in a place where - among other things - I would find people I'd stay in touch with for the rest of my life. In fact, student community was a deciding factor in my choice of college; stellar academic programs and music scene were all good and well, but I wasn't about to go somewhere unless I thought I'd be welcomed. At some point in my college search, I came across these blogs, and the more I read them, the more I wanted to meet the bloggers in person, so I figured that was as good a sign as any that I would get along with Obies. So far, my decision seems to have paid off! This summer has certainly involved a lot of staying in touch - I've written about forty letters, all told, and the vast majority have been to Oberlin friends. 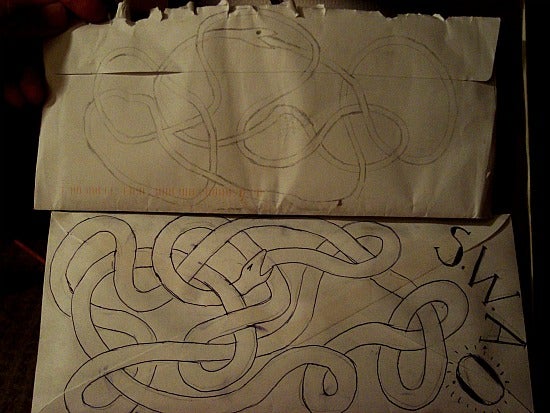 We doodle on envelopes! My friend Alex sent me the top letter; I loved the Orobouros so much that I pulled a copycat and sent him one back.

As much as I adore writing letters and getting mail in return, I'll be even happier to see my pen pals in person. I can't wait to be in a room with all of my closest friends at once! The friendships I've already built over the scant year I've been in Oberlin are incredible - mostly because they're with incredible people, mind you - and I'm just about ready for the summer to be over so that I can renew them. And by that I mean hug my friends until all the air squishes out of their lungs. 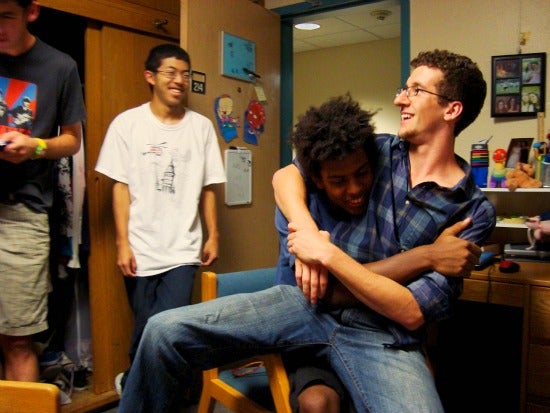 We like hugs. Especially the kind that enable you to pin someone down and put them in a headlock under the guise of being friendly.

The thing about making Oberlin friends, in my experience, is this: most people are here because they're some kind of awesome, and everyone tends to understand that. If you're a jerk to someone, you may be alienating a genius, virtuoso, or outright badass. So, not too many jerks. (Seriously, who wants to miss out some of the brightest kids in America? We didn't come to college to diss each other, middle-school-style.) I feel more accepted here than anywhere else I've lived, and have felt that way since I set foot on campus for the first time last September. It's not hard to find people who are nice to you on this campus; the hard part is picking a select few out of the huge, friendly crowd to bond with! (Alas, there is not enough time to befriend every outstanding Obie here. Woe is me.)

The bonding that does happen, though, is wonderful. My friends and I have made blanket forts for an extended edition LotR marathon; we've gone for joint runs and hurled ourselves off of the rope swing in the Arb afterward; we've made leaf piles and destroyed them again; we've built epic snow forts and doomsday snow men inspired by Calvin & Hobbes; we've competed in self-organized scavenger hunts; we've pranked each other's rooms; we've taken up the time-honored tradition of shoving pies in the face of whoever is unlucky enough to have a birthday during the school year. More mundanely, we've lived together for a year and have shared each other's stress, heartache, and joy in that time. Encouragement from my friends has allowed me to take risks I couldn't have faced on my own; if I had tremendous fun last year, it was partly because I knew that, should something go wrong, I would have a support system to fall back on the likes of which I'd never had before. Now, I'm looking forward to that support system being assembled again.

To my friends: You're the best. I love you. Please come back soon, so that I can track you down and tackle you (lovingly, of course). 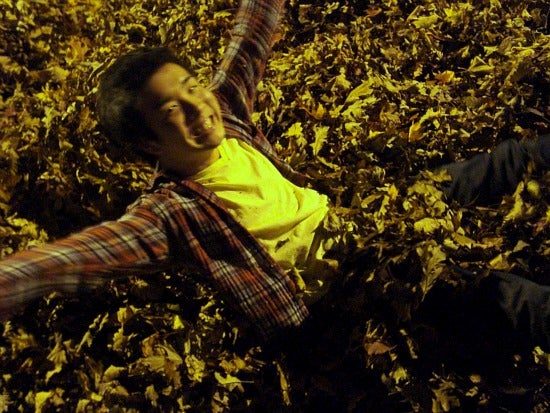 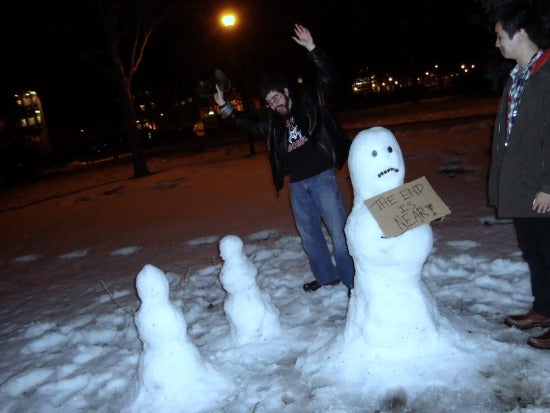 Shota and Charlie completing some rather displeased snowmen in Wilder Bowl. 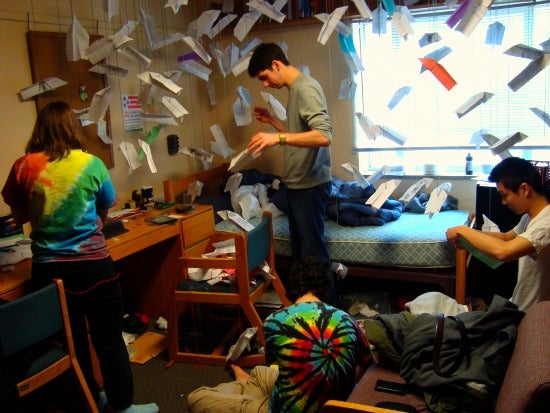 Best. Prank. EVER. Alex is notoriously messy, so we folded every single piece of paper on his floor into airplanes. There were hundreds of them; it took six of us three hours. 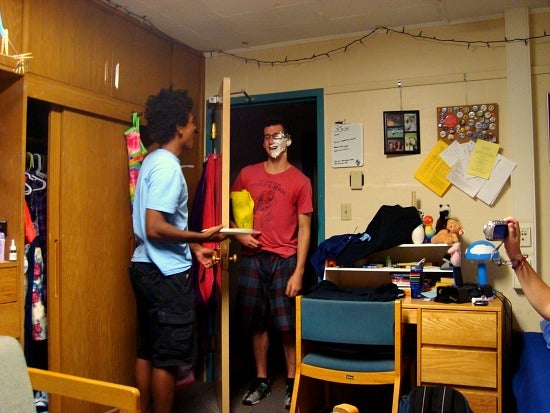 If it's your birthday, you get pied. Straight up. 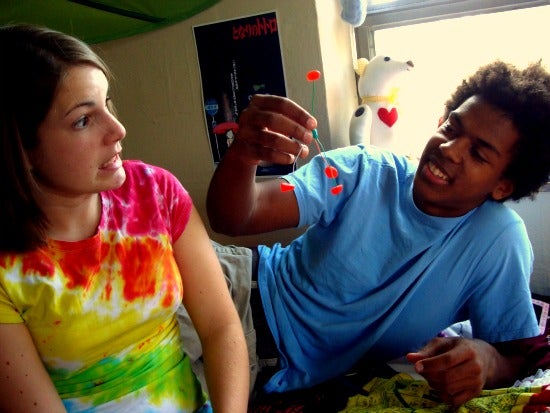 Alex helping my roommate Sarah study chemistry with dismantled paper clips and my gummies. Which he then ate. 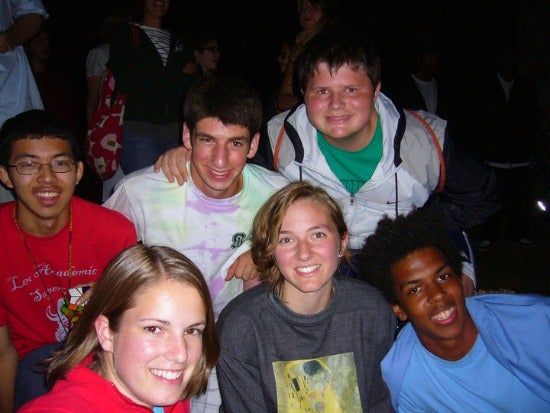 A handful of us by a bonfire during Orientation. (Cue collective "awwww.") Photo cred: Shota Horikawa.

I'm so ready to be hugged..just be ready for a pie in return.

I'm also really excited for potentially being as awesome as you and blogging about wonderous things!

I want to go to Oberlin and delight in such beautiful friendships! Cyberhugs abound! ((Oberlin))

Wait, since when did we pie people? Did I miss all the pieing? Goddamnit.

Hugs all around! So much oberlove.

Alex contacted about five different people in New York in the days leading up to my birthday. All of them were instructed to pie me. No one knew my schedule; no one would have been able to figure it out even if they knew the particulars. My birthday was fantastic, if free of whipped cream. I returned home, sat down to a Skype chat with Alex, opened the connection, and was pied in the face by my brother.

No one is safe.

Why did we have to say goodbye?
This post almost makes me want to cry.
I am very delighted
and super excited,
and to all of my friends: FEAR THE PIE!

Wow, you're so lucky to have that first photograph from orientation. You're gonna treasure that one forever.

Everyone is so adorable.

Enough with the pies! I'm sorry I brought it up. By the way, my birthday got moved to July, which means you guys won't be around when it happens. Too bad, so sad.

Also, Ma'ayan, I wish there had been a fitting picture with you in it! You are adorable too!

Yeah, wish I could say I coined it, but I didn't. I just have a lot of it.