Flashback to when I was three. Take a train from Cambridge to Shepreth (10 minutes), get out, excitement building, rush over to the wildlife park, buy one bag fish food, one bag pony nuts (gotta feed as many types of animal as possible), run around for a bit, and there they are: the wolves. Odin and Ishka. They would come running up to the fence, wagging and grinning at me. They were tame wolves, with glamorous film careers to their names. As soon as I turned 18, I would be old enough to go inside and meet them. Fast-forward 14 years of waiting: I'm 17 and a half. As if on some kind of cue, Ishka and Odin die.

Now, I'm 19 and Lewis (composition prof) says in casual conversation, 'There's a wolf sanctuary near Banff.' What?!!? Google google google - Yamnuska Wolfdog Sanctuary. Wolfdog? Basically, they have a bit of dog in them, which makes them able to be humanised. But for all intents and purposes, it's a wolf. Which you can cuddle. I am so, so in. After a near miss bus ride and a truck ride into the middle of a stunning nowhere, I got to meet Kuna and Zeus! (Ishka and Odin reincarnated.) 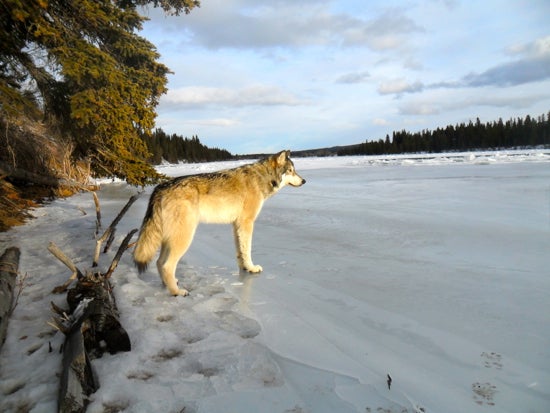 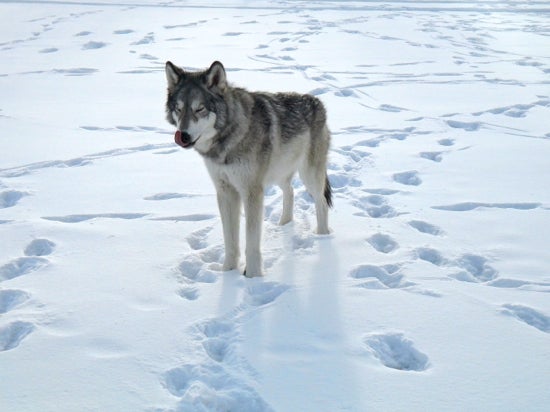 And the aptly named Zeus, of the many furs: 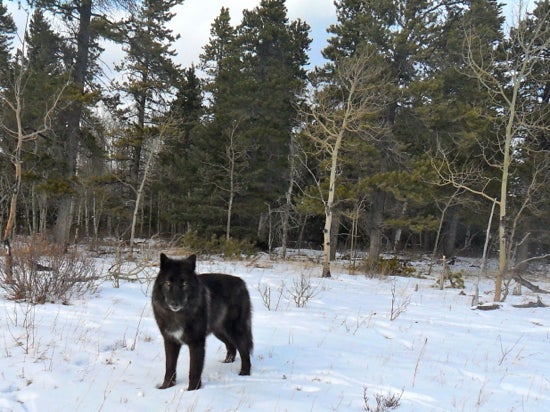 What a handsome chap. 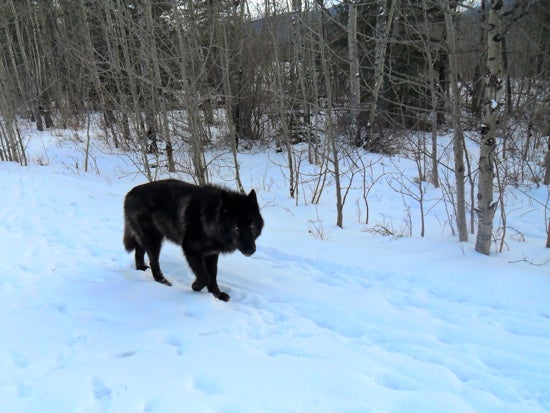 Georgina's the wonderful girl who owns this sanctuary. She started off at Snowy Owl dogsledders (see previous post) as a musher, and then got into wolfdogs. She's raised Kuna and Zeus since they were titch and she really is their mum. It's so cute. 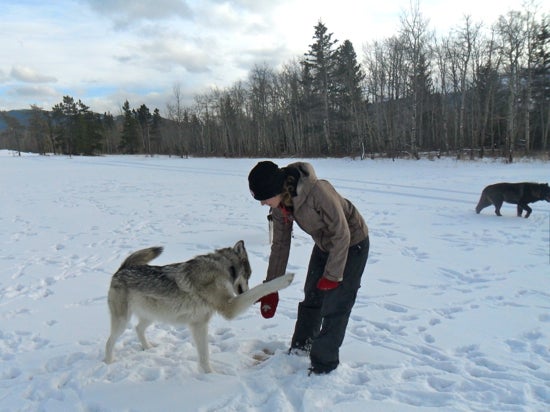 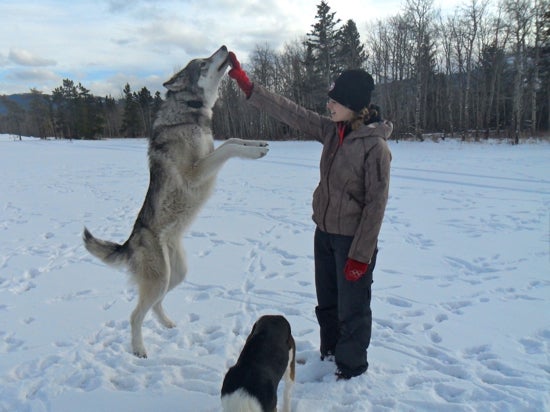 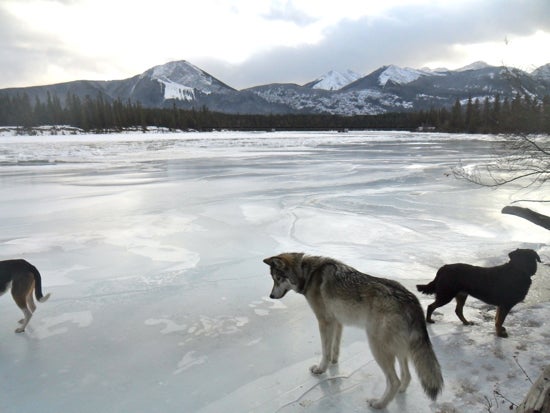 Apparently Zeus likes to fall through the ice, so he can cool off - his coat is that thick.

I felt like I was on an episode of the Dog Whisperer. This is a serious pack. And you know you've trained your pack well when they walk in a single file line: 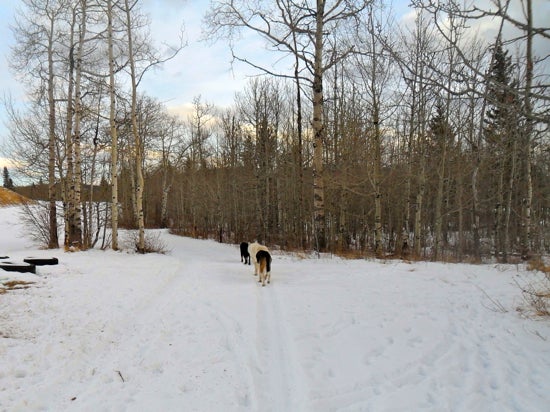 We were out for a few hours - the mountains were beautiful as always. 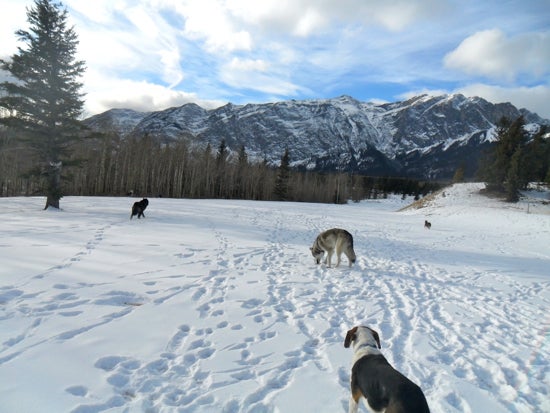 Video of Kuna on the walk, and then one of the normal dogs starts trying to play with her - not the best idea.

Video of Zeus on the walk - he's such a superwolf! A little camera shy, too :)

Did you get that last thing she said? Yep, wolves are not bath lovers. 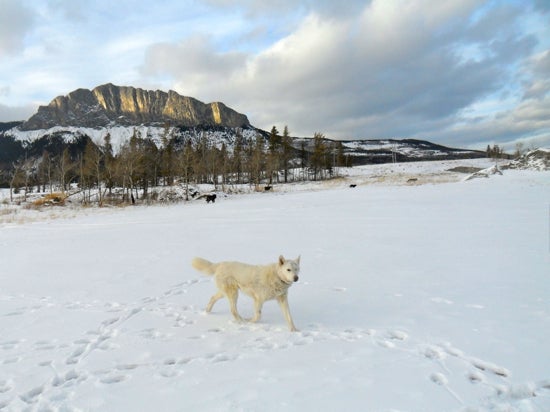 This guy's a cute cute cute low-content wolfdog (i.e. a bit more doggy and cuddly) - he only has one eye, because he came from an owner who didn't look after him at all and the eye got infected and wasn't treated. It's a really sad story, but Georgina's rescued and rehabilitated him and now he's up for adoption. I WISH Oberlin dorms allowed wolfdogs. 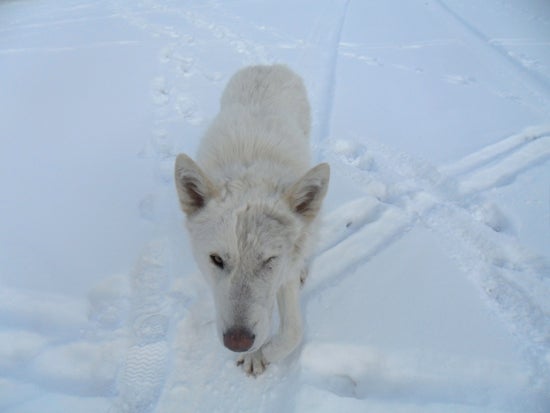 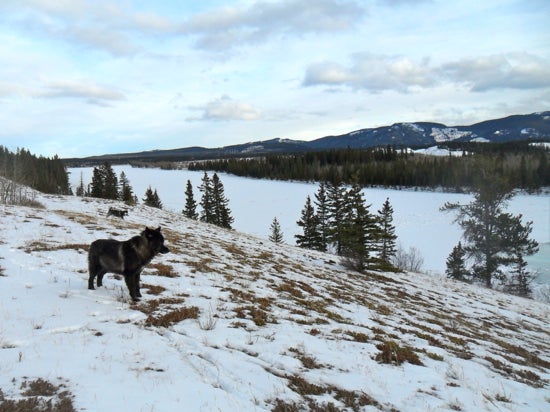 Zeus admires the view, which is almost as gorgeous as he is. 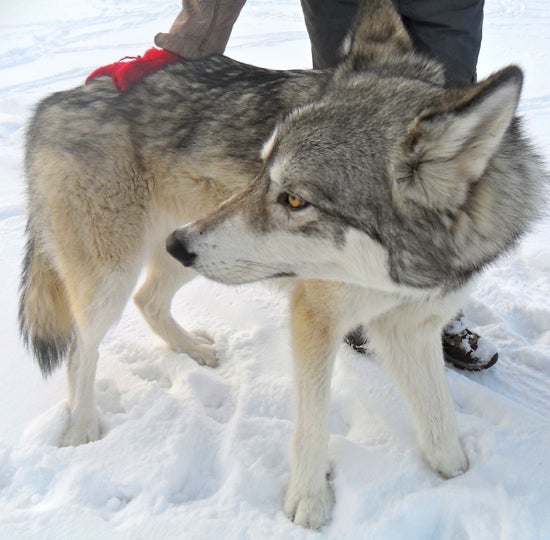 Kuna is so intelligent. Everything is on her terms. I can call out her name all I like, and she'll barely lift an ear, but then out of nowhere she'll be licking my face. 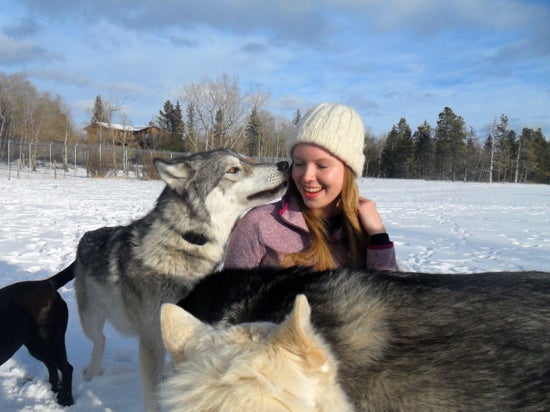 Shortly after this photo, I noticed Kuna eating a pile of someone else's poo. Georgina shouts, 'No Kuna, don't eat the poo! You know mum doesn't like that.' I didn't go for any more kisses after that.

Most wolfdogs are low content (i.e. great great granny was a wolf), but these guys are high content (dad/granddad was a wolf). It's incredible to get so close to these beautiful animals. I was expecting them to be much more dog-like than they were, but it's actually a whole other character: very wary, and loving, but in a stronger, much more independent way. Georgina says she can't imagine life without them. But it's awful how many wolfdogs are owned by people who have no idea what they are or how to care for them. It's just some ego trip, to 'own' a wild animal. Then, when they start behaving like a wolf and stop being a cute puppy, they get taken to the pound and put down. There should be laws against breeding them, but there aren't. I honestly think that for 99% of people, who have any other serious commitment in their life, wild and domestic species should not mix. It's a big mess if you ask me, and it falls on people like Georgina to sort it out.

Pause for an hour and watch this really great dog whisperer special on wolfdogs, please.

Georgina's wolves have an amazing life, running around the mountains, getting their choice of high quality raw meat patties, ranging from goat to elk to salmon (Kuna apparently will not eat the same meat more than two days in a row), and live twice as long as they would in the wild. Not a bad deal at all. 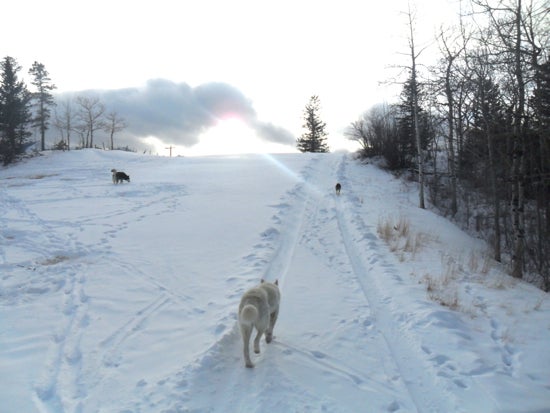 So today, I did something I thought I would never be able to do. Looking into those bright yellow wolf eyes is something I can't describe. Yes, Banff. Yess. Life is GOOD! 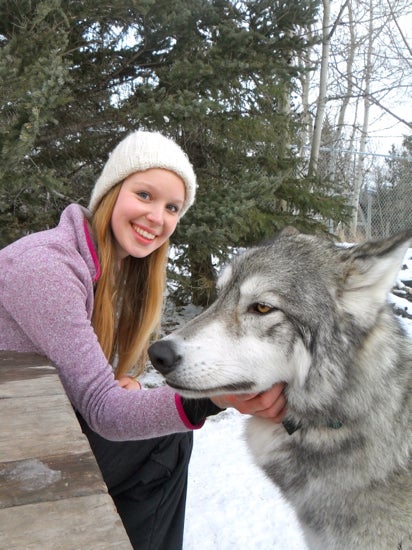 My Banff days are almost over. Time for a winter term report card.

My aims going into winter term:

My goals achieved during winter term:

Self-given grade at the end of winter term: A+++ (the 3rd plus is for writing a bit of music).

Actually, I wrote a lot of music and really enjoyed having a concentrated period of time to devote to it. But for me, it's more important that I had time to actually think, develop and discuss ideas, and get a whole lot of perspective.

What a crazy, happy winter term! I've decided to stop using the word 'successful', because I've realized that people in the US think of success in entirely the wrong way. They think it means how much money you have - Obama's 'State of the Union' cleared that up nicely for me - and I truly, truly hate that. Crappy Obama quotes coming up: 'Community colleges should be career centres.' 'In this country we admire financial success.' 'A good teacher can increase the lifetime income of a class by $250,000. *massive applause*' Oh, so that's why we go to school! Education = flatscreen! I could see him gritting his teeth as he said it. What a sellout. I know he's just playing the game, but it makes me vomit. So, happy it is.

And on that note, I am now going back to Oberlin to take a ridiculous number of courses, because I think I want to (double degrees are for lunatics), and die. But I have informed everyone that it will be death by soufflé - cheese soufflé, hand made using the Stevenson Dining Hall ingredients and microwave, to be precise - so we've all agreed that it's the best way to go.

The only real criticism I have of Oberlin is this: there are too many opportunities. You have to self-limit, otherwise you will self-combust. It seemed slightly crazy for me to finish fall semester and go jetting off on a whole other adventure for winter term, but as well as spending some intense time on composition, I also had a very refreshing time and loads of fun, which is what the doctor ordered. So thank you, Oberlin, for giving me the chance to go somewhere as beautiful as Banff and to get so much out of it.

Many more delicious blogs will be coming your way - on a mini sushi train, of course. Or a unicycle. Unless I decide to ditch 'Aural Skills 2' and dogsled off into the horizon. You never know.

RUBY!!! I love all your pictures. Looks like you had a fantastic time :D
see you sunday!!!

I was so so happy when I read this... I LOVE WOLVES TOO!!!!! It was death by cuteness with all those photos. Thanks so much for posting this!!!

I'm so pleased your first winter term was such a wild success. (And yes, we have way way way too many opportunities. It hurts to say no, but sometimes you have to.)