You get the idea.

I've always loved the start of classes. There's something so great about waking up at the crack of dawn on the first day of school; clean textbooks lined up on the windowsill; a bookbag loaded with notebooks from the Recycled Products Co-op; marking the first completed assignment on a fresh syllabus. (If only I could bottle some of this enthusiasm and save it for midterm week.)

This semester, my enthusiasm is bolstered by the fact that I have, objectively, the best schedule ever:

Yes, I declared an archaeology major three semesters ago. And no, I haven't taken the intro yet. It wasn't intentional - I kept getting diverted into other cool courses - but I realized recently that I've met all the major requirements except a seminar, a senior project, and the intro course. That's kind of embarrassing. So I'm finally taking Intro, and it should be no surprise that I'm loving it.

Ancient Greek scares a lot of people, but - surprise, surprise - it's easily my favorite class. The last three semesters have winnowed us down to a group of six hardcore Hellenists. We meet in the Classics seminar room, which is as gloriously antiquarian as the Science Center is modern: an enormous wooden seminar table, floor-to-ceiling bookshelves encompassing the greatest works of human history (and of the department's alumni), and a much-revered bust of Homer wearing a lei. (Students are often photographed with Homer upon declaring a classics major.)

Last semester we tackled the Iliad; this semester we're reading Herodotus, which is an absolute blast. Where else would you learn how to capture a crocodile with some mud and a dismembered pig?

Organic chem: it's not just for pre-meds anymore. I took Chem 101 on a whim my first semester, and although I like science, I never expected that I'd enjoy it as much as I did. Three semesters later I'm about to declare a minor in the department. I don't expect orgo to be easy, but after surviving Analytical Chem last semester, I'm hoping it will be a bit of a breather...

With a name like "Ancient Mystery Cults," how could I stay away? This is the first Religion course I've taken, and probably won't be the last. Two days in, we've already been through some of the most thought-provoking readings and discussions I've encountered at Oberlin. How do you uncover and interpret evidence for social customs that were supposed to be top-secret? What are the relationships between religion, ritual, ideology, magic? Did the concept of "religion" even exist in the ancient world, or is it a modern idea?

Oberlin is lucky enough to have our own gamelan - a traditional Indonesian percussion-based ensemble. I started playing gamelan last semester through the Gamelan ExCo, which my friend Sean taught. After brushing up on my skills and practicing some of the elaborating instruments over Winter Term, I've joined the "big kid" ensemble. I'll post more about gamelan this semester, but in the meantime you can read Sean's Oberlin story and watch a piece from our final ExCo performance:

Bottom line: this semester is making my brain feel so good. And even with co-op work, study abroad applications, and the never-ending quest for summer internships, it promises to be way less grueling than last semester...

Finally, I signed up for a carrel in Mudd, the main library. Here's the magic spot where I'll be taking reading notes, tackling problem sets, and probably writing blog posts: 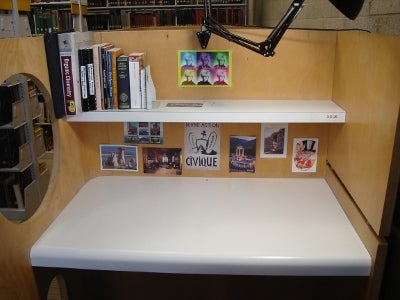 Yup... it's going to be a good semester.

Your carrel looks so soothing. I want to go THERE to do my homework.

I know, right? You can't tell from the picture, but right behind it is a floor-to-ceiling window and a giant plant.